How to avoid stress during holiday entertaining? Make a luscious and flavorful gluten free turkey gravy ahead of time! Then when the big day arrives, you can just reheat it and have more time to enjoy your guests and get in on all the fun. (Skip to recipe.) 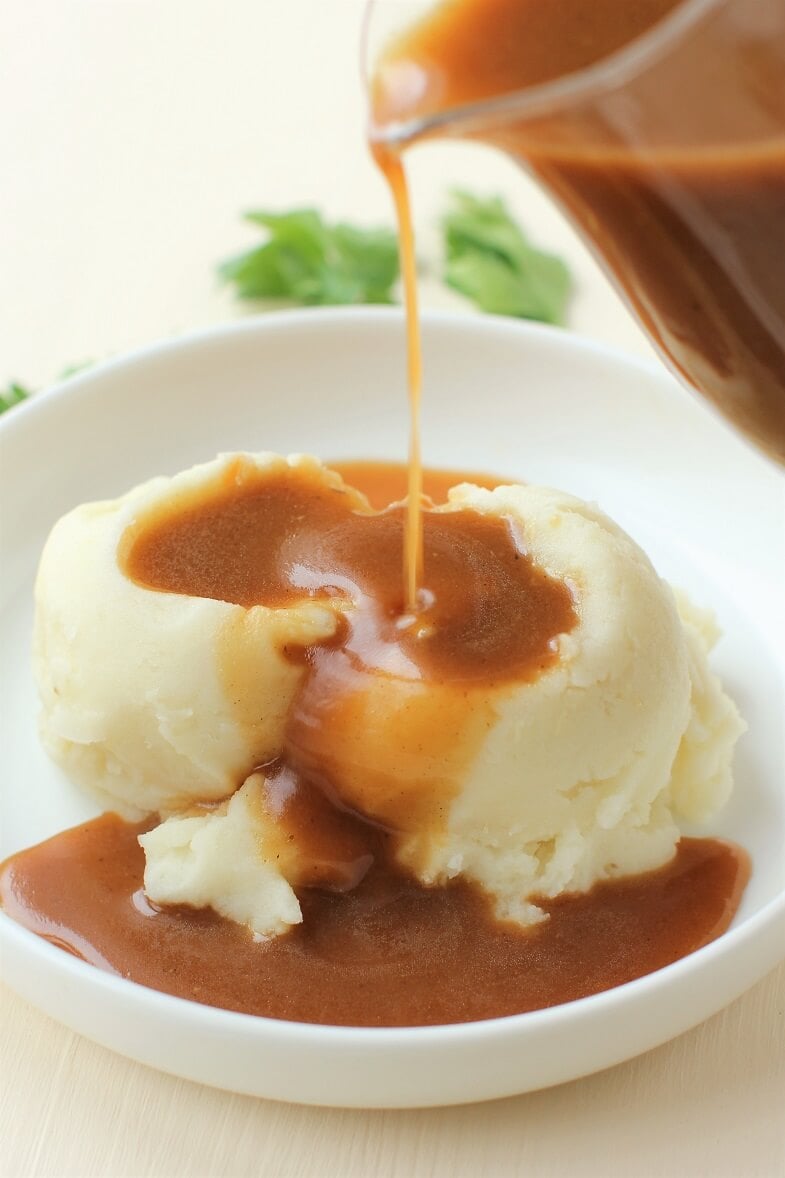 Raise your hand if you need more stress in your lives.

Okay, I don’t see any hands . . . . I’ll take that to mean you actually want less stress in your life.

Cooking holiday dinners is definitely one of those events that raises people’s stress levels by a notch or two (or ten). Standing at the stove trying to get the gravy made while carving the turkey, keeping the cat off the counter, corralling stray kids running through the kitchen, and also heating up the side dishes and trying to find the bottle opener at the same time is not exactly a relaxing scenario.

You can at least take one of those items off the list. (And lock the cat in the laundry room, set the kids in the corner with a bag of jelly beans, give the sides to Aunt Susie to heat up, and put the bottle opener into your pocket ahead of time so you can pour yourself a glass of wine while you carve the turkey in a blissful state of zen tranquility (hah!).

The problem with on-the-day gravy making is that you need to wait for the turkey to finish roasting so you can snaffle the drippings. This is about exactly the same time when all the last-minute meal prep explodes into a frenzy of crazy-making activity. You need the skills of a highly-trained special ops general to direct and coordinate all the moving parts in order to get dinner on the table in one grand finale flourish.

Jeeesh! Just thinking about it makes me tired.

Thank goodness you can make the gravy a few days ahead of time and tuck it away in the fridge, to just reheat on the day – one less thing to get frantic about. (Making the stuffing and mashed potatoes ahead of time also helps keep sanity levels to a manageable level.)

Then while the turkey is resting and getting carved, it’s easy to reheat the gravy on the stovetop and stick the stuffing and other sides in the oven to warm up.

So put on your favourite tunes, set the gravy bits to roasting, and go lay on the couch to read a trashy magazine or scroll through Pinterest for fun crafts to make out of bottle tops and turkey bones. 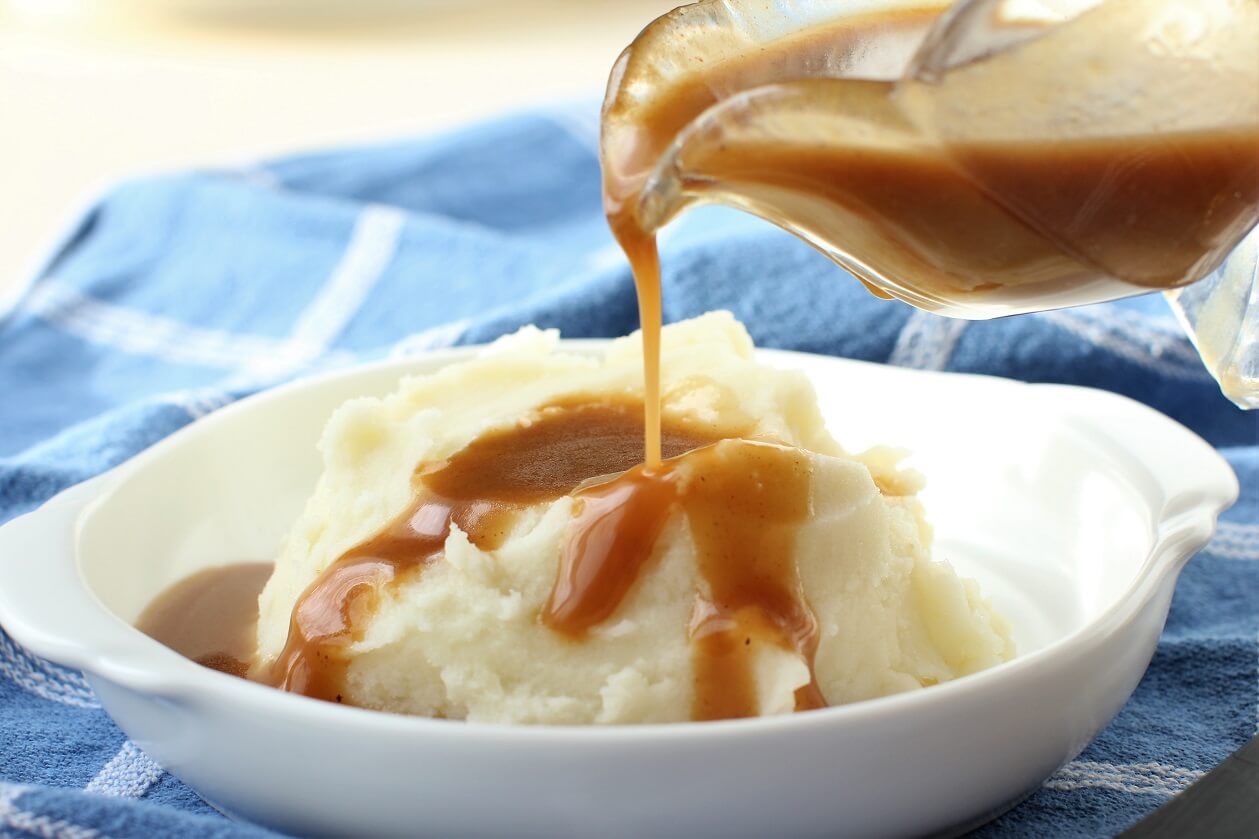 The secret is in using turkey wings. These are the best parts to use for gravy-making, as they actually have a lot of meat on them, and also contain enough bones and a high level of collagen to add flavour and a luscious silkiness to your gravy. 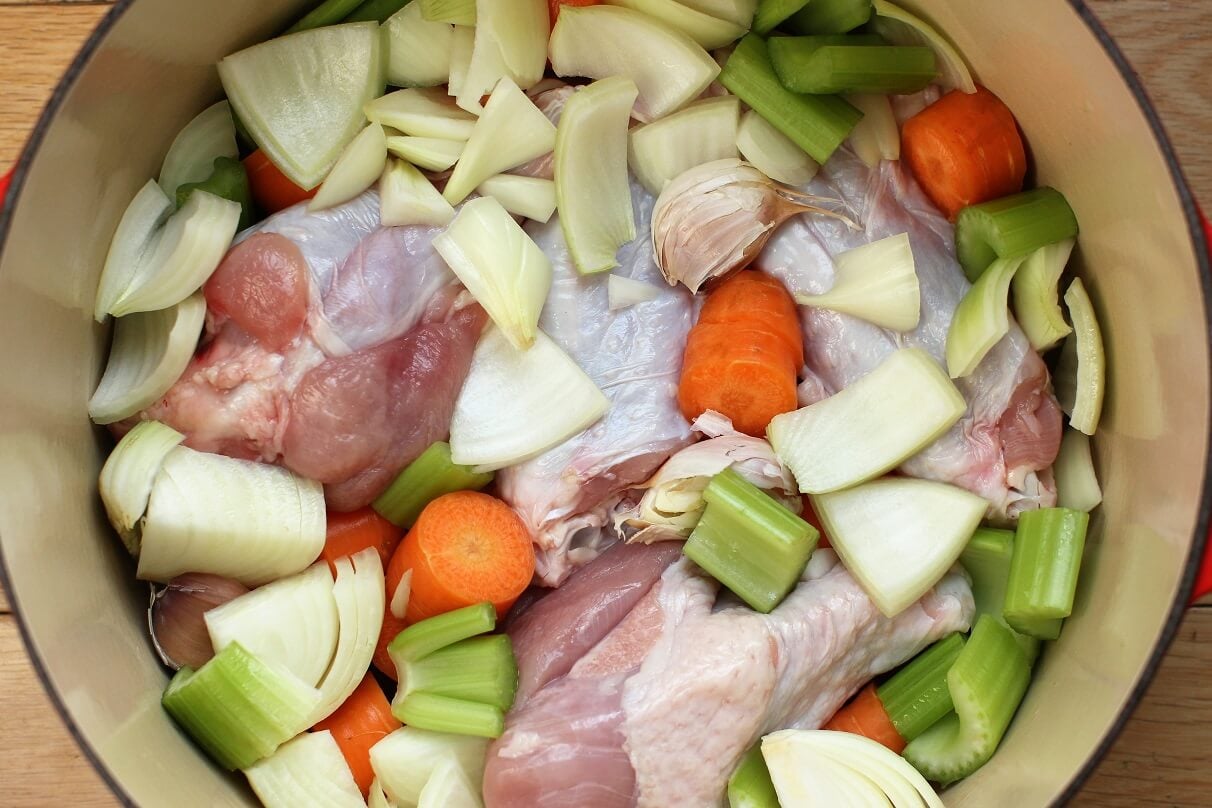 Roast up a couple of big, meaty turkey wings along with some carrots, celery, and onions, until the wings are golden and crispy, and the vegetables are a deep, dark caramelized brown – take them almost to the edge of being burnt . . . but not quite. This is what adds that rich brown colour to the gravy and gives it a serious depth of flavour.

they’re all roasted and golden, and the veggies are deeply caramelized to flavor the gravy (okay, I might have taken them just a smidge too far, so I picked out a few of the blackest pieces and didn’t use them for the gravy)

Then you pop the roasting pot onto the stovetop, add water, and simmer away to get all the flavour out of the wings and off the bottom of the pot.

Strain it and let it cool. You’ll see that it gels up from all the silky gelatin and collagen (super healthy) that’s come from the wings. You’ll use the fat that settles at the top to help make the roux for your gravy – please don’t throw it out. That lovely layer of fat is golden – that’s where lots of the flavour is. Why throw it down the drain, just so you can add some other fat back in? You’ll add a bit of butter and then make the roux (a cooked paste of fat and flour) with sweet rice flour.

Then you’ll pour in all that rich, dark stock you made, and cook it til it’s thickened and bubbling and glorious. 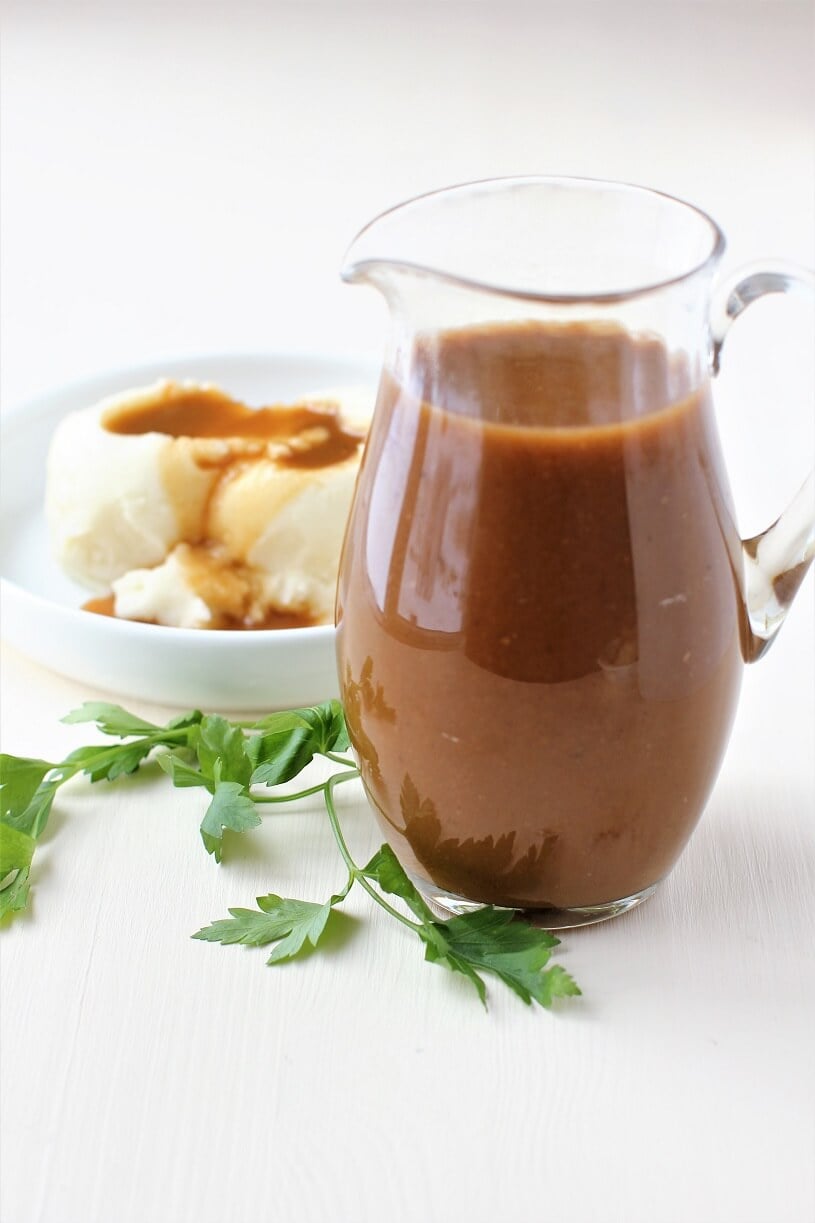 Yes, sweet rice flour is a magic ingredient for gravy-making. Even if you’re not cooking gluten-free, I highly recommend you keep a bag of sweet rice flour around just for thickening gravies and sauces. Sweet rice flour doesn’t clump! Yay. No more lumps in gravy if you use this easy ingredient. If you do get a few small clumps, you can easily whisk them out – no need to strain the gravy or put it in the blender to smooth out a lumpy mass. Sweet rice flour also produces a beautiful gravy that stays silky and doesn’t congeal as quickly when it cools. It’s got the nicest texture and appearance – the gravy’s not clear like when you use cornstarch, and it’s not slimy like when you use tapioca or arrowroot starch. It just makes a lovely gravy.

Sweet rice flour is made from glutinous rice/sweet rice, hence the name. It does not contain any gluten. It can be found in health food stores, the Asian section of large supermarkets, or in Asian import stores. It also goes by the names of glutinous rice flour or mochiko (the Japanese name for it). 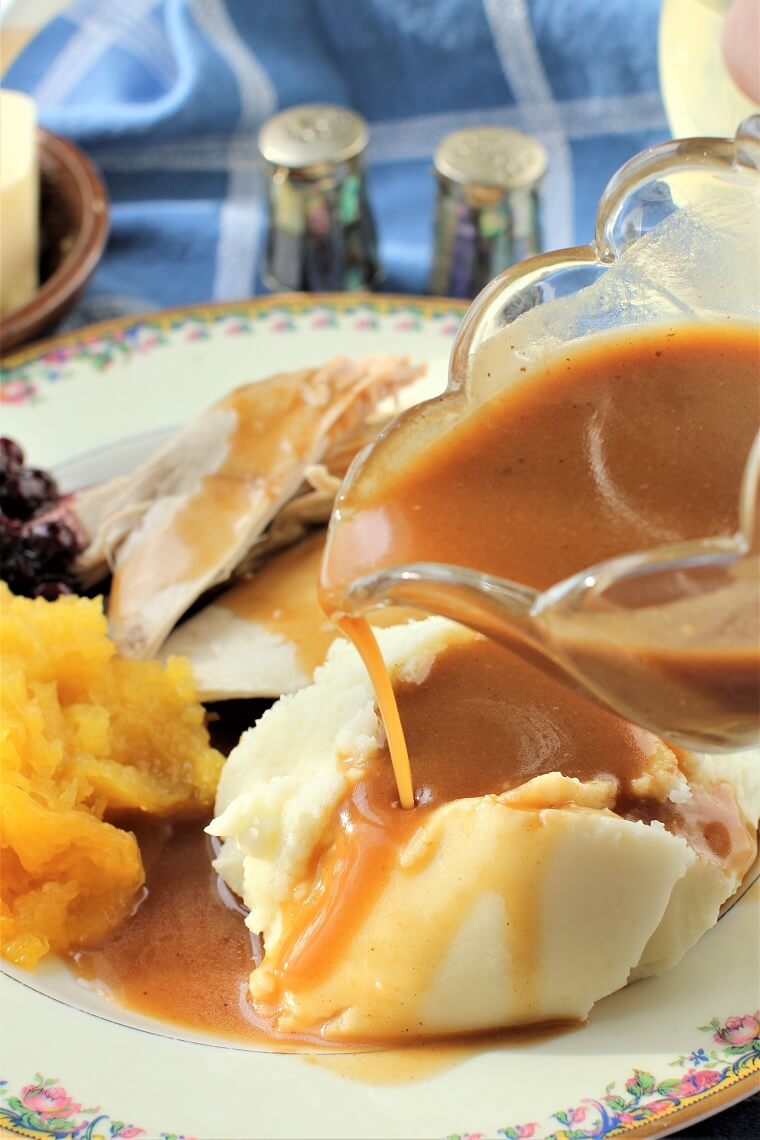 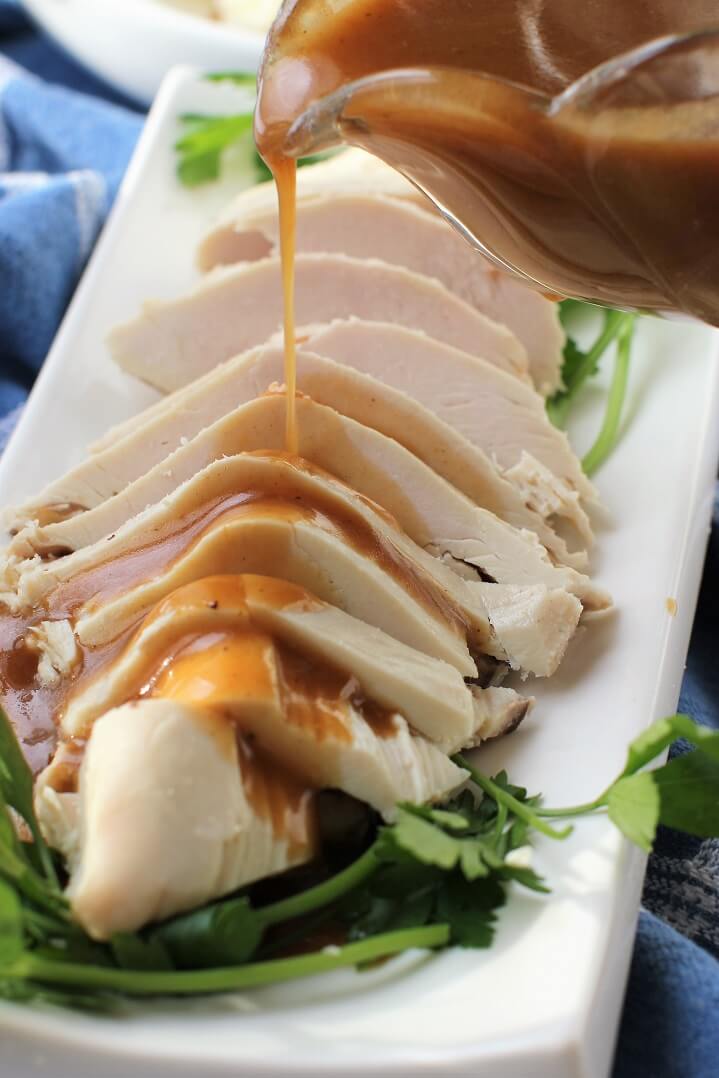 Your gravy is ready for making everything more delicious!

Even if you’re cooking for a smaller crowd this year, you’ll be happy to have lots of extra gravy on hand to serve with leftovers, maybe make a fricassée, or pop in the freezer for future tasty meals.

Kitchen Frau Notes:  You can usually buy packages of turkey wings in the grocery stores before the holidays. If you can’t get turkey wings, substitute with skin-on, bone-in turkey thighs or chicken wings or thighs.

If your broth is too light in colour, use soy sauce or gluten free tamari to season the gravy instead of salt. Remember that a gravy needs to be well salted, as it will taste less salty once poured onto other foods. 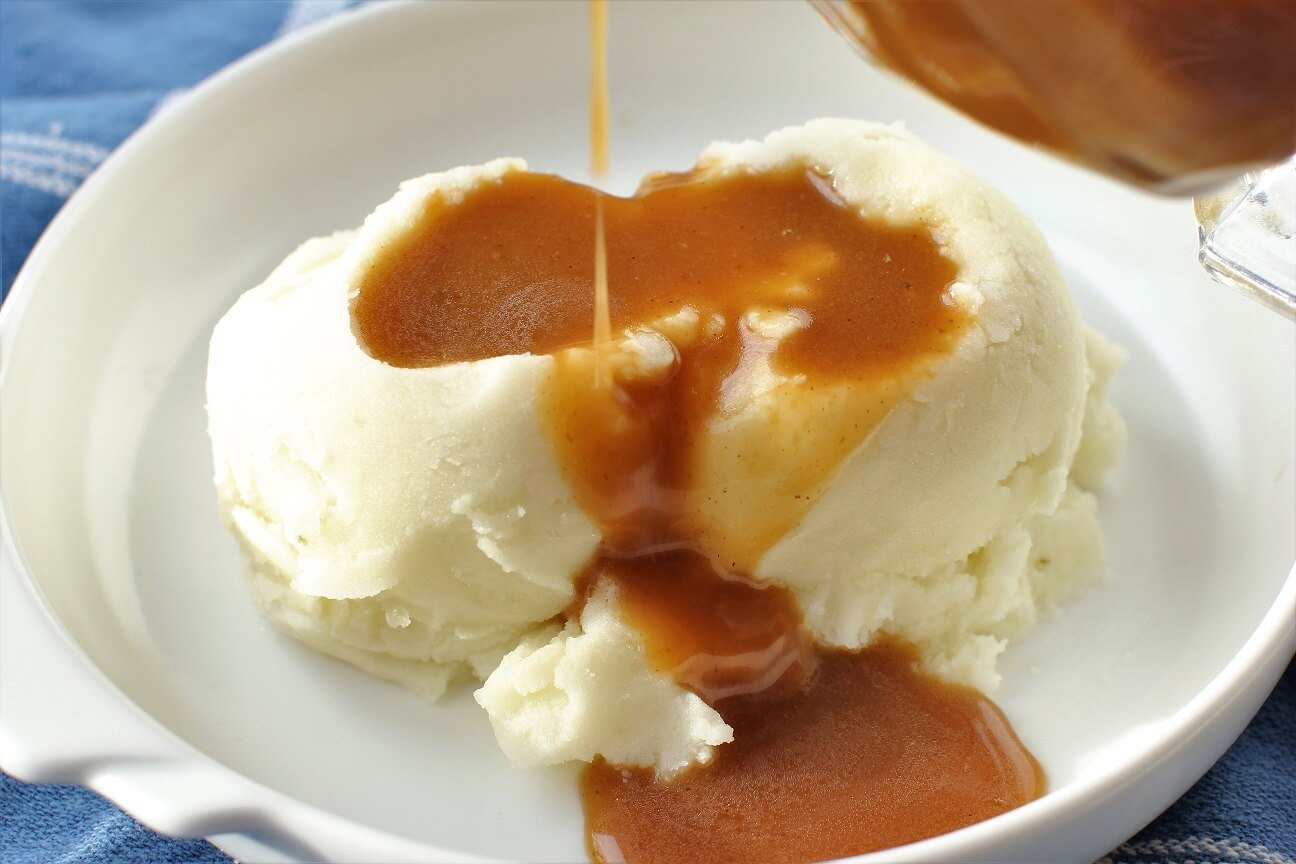 Spread the oil out in the bottom of a large dutch oven or heavy-bottomed pot or deep skillet (12-inch cast iron would work) that can go into the oven and later on can be cooked on the stovetop. The wider the pot, the better, so you have more surface area for the turkey wings and vegetables to caramelize and create that rich brown fond to flavour the gravy. If your pot is too narrow, the veggies will steam rather than roast, and you won’t get many browned bits. If you don’t have a dutch oven or oven-going skillet, roast the vegetables in a roasting pan or 9×13-inch pan and transfer the roasted ingredients to a pot to simmer, using some of the boiling water to loosen the fond at the bottom of the roasting pan and getting it all into the stock.

Lay the turkey wings into the pot.

Cut the carrots, celery, and onion into 1 inch (2.5cm) chunks and arrange them around the turkey wings. Lightly smash the garlic cloves with the flat blade of a knife (leaving the peel on will prevent them from burning) and tuck them among the vegetables.

Roast the turkey and vegetables in the oven, uncovered, for 1½ hours or longer, until the turkey is golden and the vegetables are caramelized to a deep brown around the edges. If there is still liquid in the bottom of the pot, return it to the oven and roast it until the liquid evaporates and the fond at the bottom becomes dark brown. Watch it carefully near the end and remove it from the oven when the roasted bits are dark brown but not black. There may be a few black bits of onion edges, but that’s okay – they’ll add lovely colour to the gravy.

Move the dutch oven onto the stovetop. Add the boiling water and the bay leaf and cover the pot. Simmer it, covered, for 45 minutes, then remove the lid and turn up the heat slightly to keep it bubbling gently. Simmer for 15 more minutes, uncovered, to reduce the broth.

Pour the contents through a strainer and measure the liquid. Add enough water to make 4 cups broth in total. (Pick the meat off the bones and use it for another dish – makes great turkey sandwiches.)

Chill the broth until the fat has solidified, 2 to 4 hours or overnight.

Scrape the layer of fat off the top of the broth (it will be stiffened, but still somewhat soft) and put it (the fat) into a medium-sized saucepan. There should be two or more tablespoons of it. It’s okay if some of the gelled liquid comes along. If there is less fat than two tablespoons, add extra butter to make up the difference. This fat contains a lot of the turkey flavour, so don’t throw it out – it’s what makes your gravy special.

Add the 2 tablespoons butter to the fat in the saucepan and heat over medium heat until they are melted. Add the sweet rice flour. Cook and stir until combined and bubbling. Add the broth, a little at a time and whisking after each addition until it is all incorporated. Add the salt, pepper and sage. *If you think the gravy is too light in colour at this point, omit the salt, and add soy sauce or gluten free tamari to taste instead – that will darken the gravy to a golden brown. Make sure to make the gravy salty enough, keeping in mind that it will taste less salty once poured on potatoes or meat.

This gravy can be made up to 3 or 4 days ahead and kept refrigerated, then gently reheated on the stovetop to serve it. Add a splash of water to thin it, if desired.

Turkey gravy also freezes well for up to 6 months (if there’s any leftover). 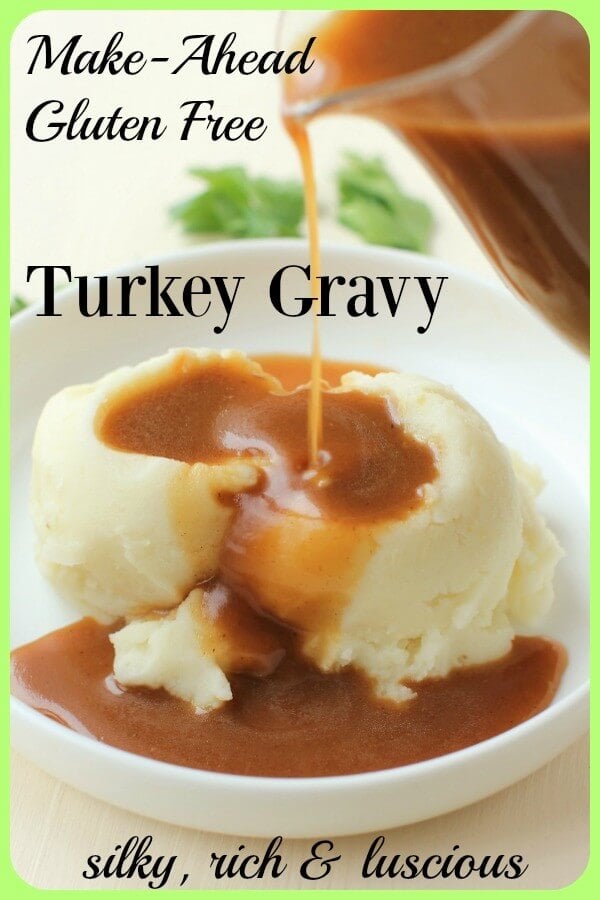