Just two ingredients from your cupboard make this simple but effective remedy for the common cold. A few spoonfuls of Honey Cinnamon Cough Syrup will soothe that sore throat and get you feeling better faster. (Skip to recipe) 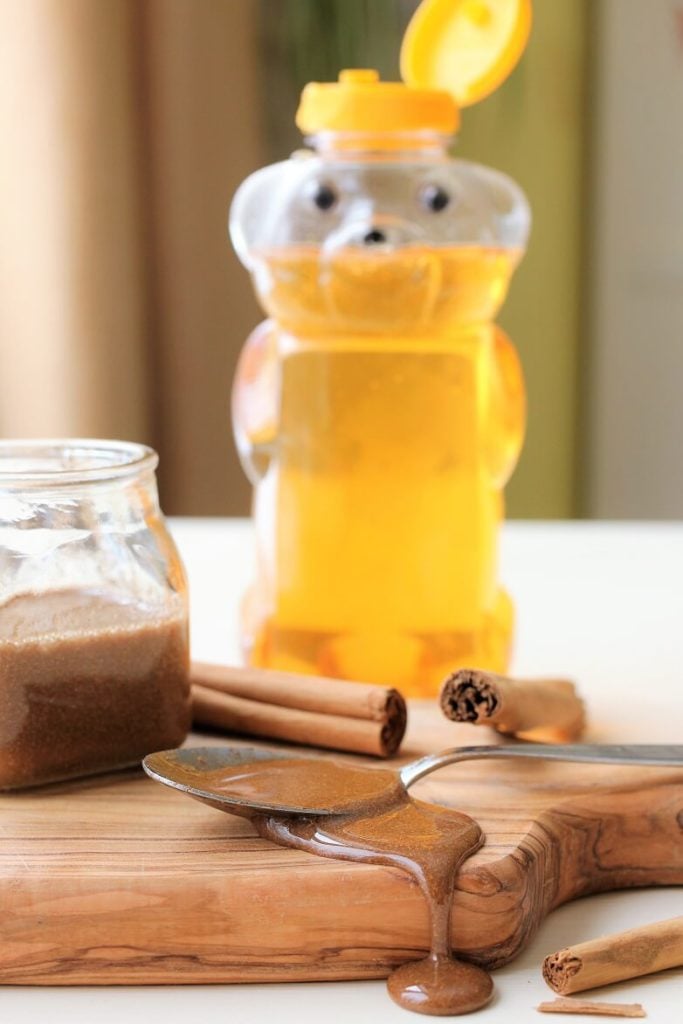 The snow crunches beneath my boots as I walk out to the chicken coop to gather the eggs. Pippa frolics around me, her whiskers coated with a furring of white. The world is sleepily still, save for the odd creak of winter-bare trees as they settle in the cold. I scoop up a handful of white fluff, bright and fresh against my woolly red mitten. I can't resist licking a mouthful and feeling it melt like cotton candy on my tongue. 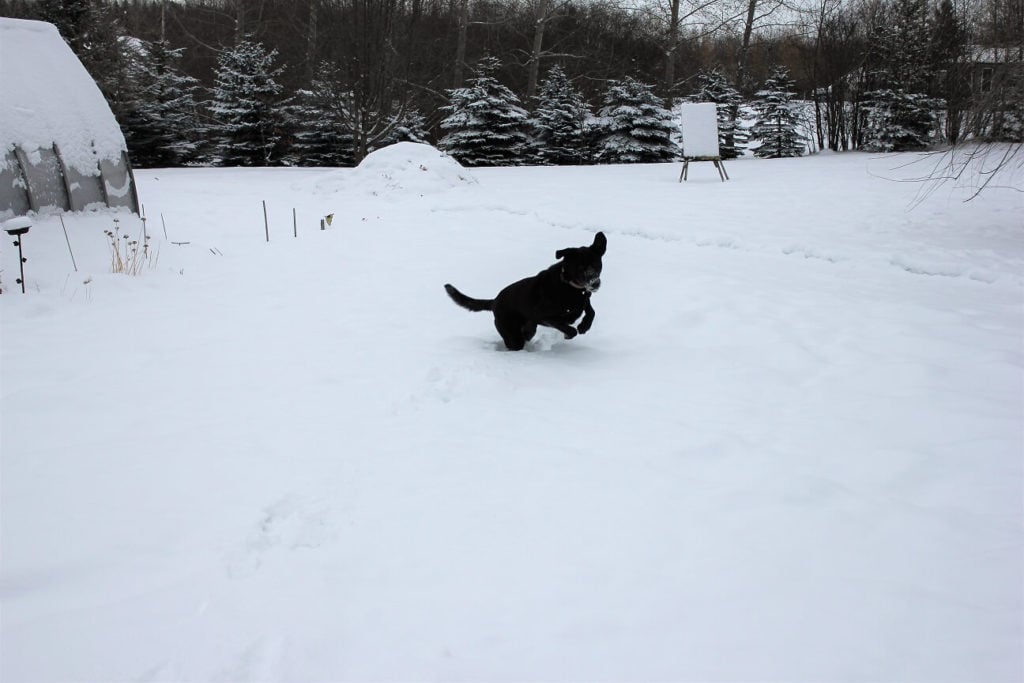 We're settled in for another cold spell. But I don't mind. The recent snowfall has washed the world white and clean again. It's comforting to cocoon cozily at home for a few days - distancing myself from the crazy life that often threatens to overwhelm. 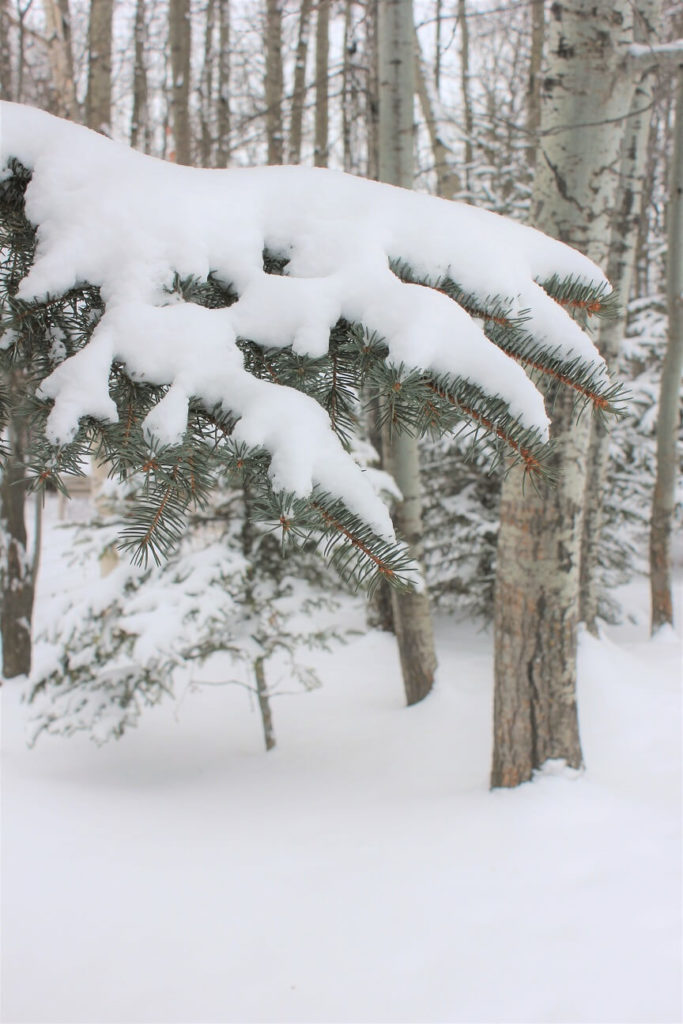 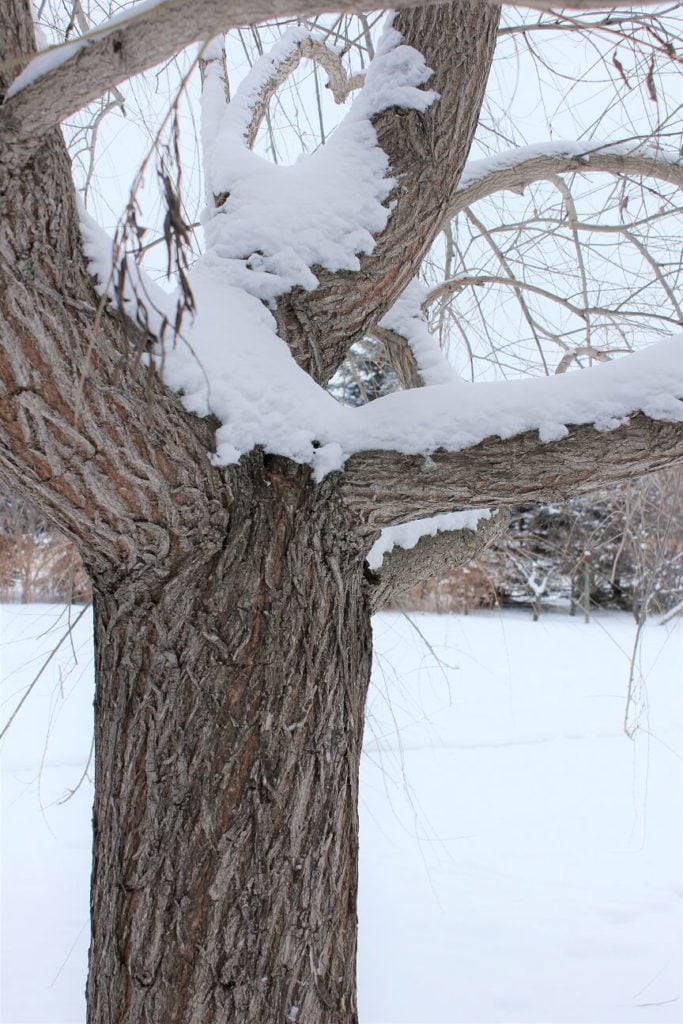 I'm glad I got rid of the cold that was threatening to move in and spoil my enjoyment of these precious days at home. It started with that familiar scratching in my throat - sore when I first got up in the morning. And a general aching and exhaustion. I knew I needed to knock that cold monster back on his haunches before he could pounce his way any further into my life. I didn't have any lemons in the house, or any of my mom's amazing fail-safe homemade cough syrup, and I didn't feel like driving into town. But I did have a pot of honey and a jar of cinnamon in my cupboard. I knew those two ingredients are an amazing power duo when it comes to fighting colds, too. So I measured a spoonful of cinnamon into a bowl and drizzled on a crown of golden honey, stirred the two together into a nutty brown elixir, and dosed myself with a delicious sweet spoonful morning, noon, and night for the next few days. 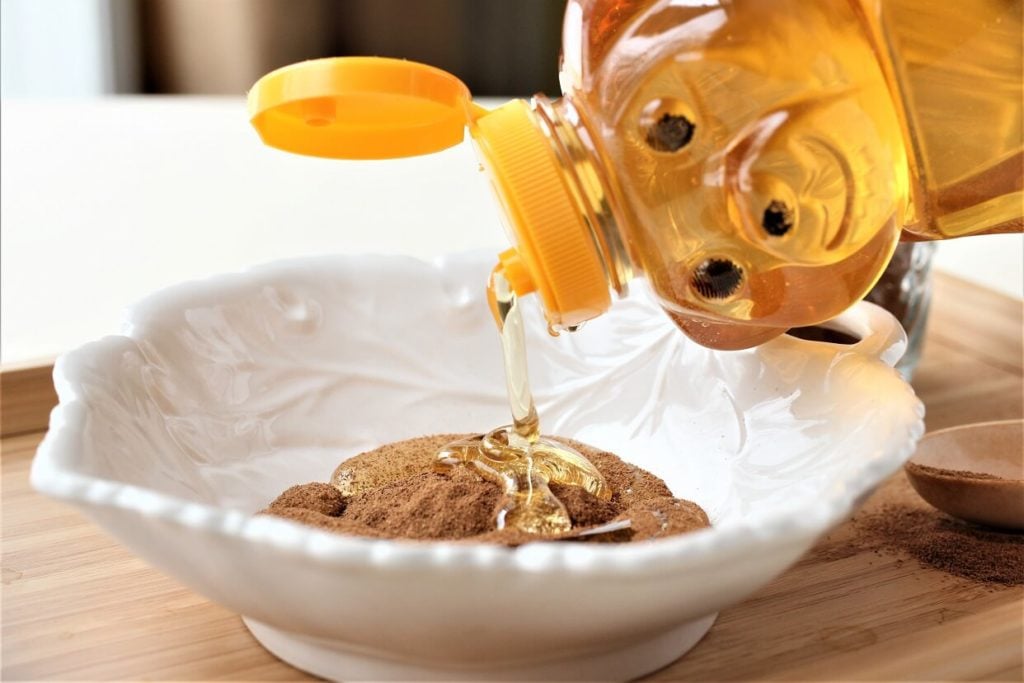 That nasty old cold monster just retreated with a whimper, his tail between his legs.

Haven't seen him since.

I sure hope he's not headed your way! 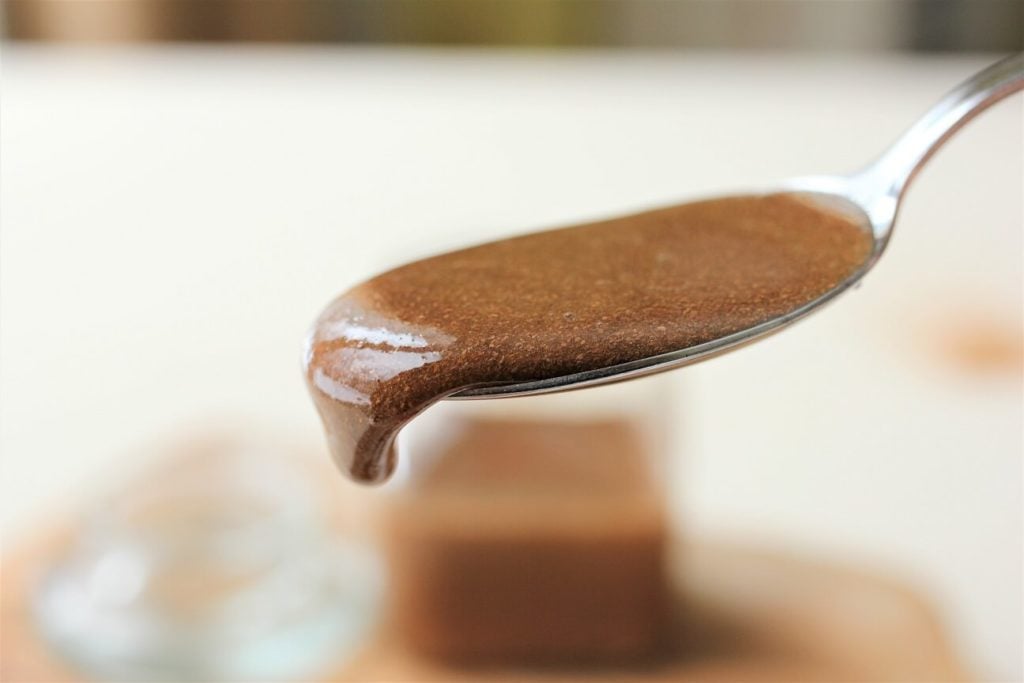 Both honey and cinnamon have amazing qualities that make them ideal for the tough job of tackling the ugly cold monster.

Research (here and here) has proven honey to reduce cough symptoms in patients. Raw honey has antibacterial and antifungal properties. It is also a natural humectant, which means it absorbs moisture from the air and delivers it to your dry throat. Not only does it prevent nasty cold bacteria from growing, it soothes sore throats and provides relief from coughing.

Cinnamon is that other powerful and feisty little cold warrior. It is antiviral, antifungal, antibacterial, antiparasitic, and anti-inflammatory. Why, it's basically just anti-everything that's nasty. Cinnamon is the bark of several species of closely related trees growing in China, Sri Lanka, parts of Asia, and the Caribbean. There are two types of cinnamon, Cassia cinnamon, which is the most widely used and commonly sold in grocery stores, and Ceylon cinnamon (sometimes called true cinnamon), which is grown in Sri Lanka and Mexico and is more expensive and not as common. 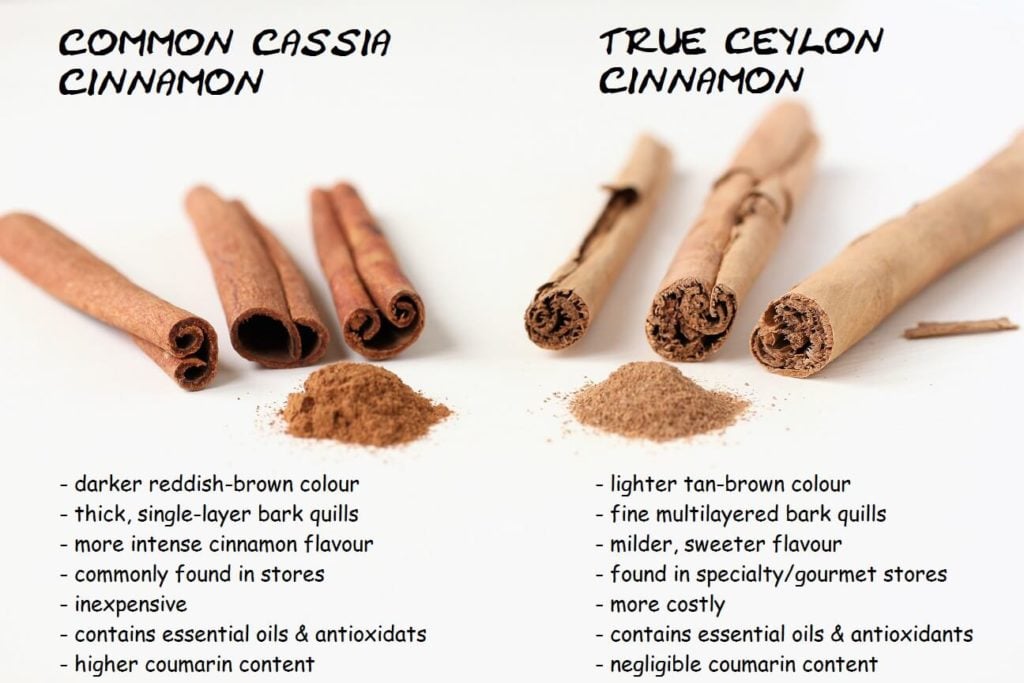 Both types of cinnamon have generally the same powerful health properties, however Cassia cinnamon contains much higher levels of coumarin, a toxic natural substance that can act as a blood thinner. You would have to consume very large amounts of cinnamon daily to ingest toxic levels of coumarin, but for the sake of safety, if using cinnamon for medicinal purposes, it pays to seek out Ceylon cinnamon in specialty shops or online. It is milder and sweeter in flavour, and its flavour can dissipate somewhat in cooking. I use regular cassia cinnamon in small quantities for my cooking and baking because of its more intense flavour. I use the milder, sweeter Ceylon cinnamon for desserts, adding to my coffee and drinks, and for cold remedies and health solutions.

And if you feel you need some more Cold-Monster-Fighting weapons in your arsenal, try my other tried and true remedies:

May the Force Be With You!

Kitchen Frau Notes: This cold medicine will keep almost indefinitely in the cupboard. However try using up unused portions by stirring a small spoonful into your coffee, tea, or hot chocolate, or by spreading it on toast for a delicious sweet cinnamon hit (maybe along with some peanut butter and sliced banana). Or drizzle a bit on top of vanilla or chocolate ice cream. Mmmm, Hippocrates had it right when he said, 'Let food be thy medicine and medicine be thy food.' (431B.C.) 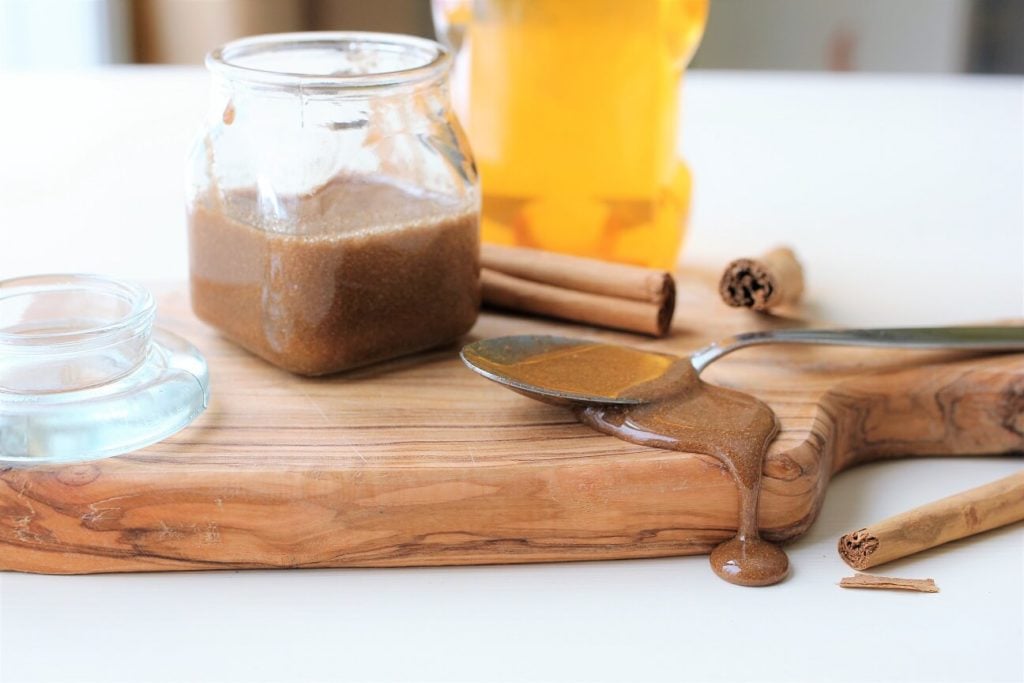 Stir together the honey and cinnamon to form a paste. Scrape it into a small container with a lid. Store at room temperature for several months.

Take one teaspoon of the honey cinnamon syrup three times a day for 4 days as soon as you feel the first signs of a cold coming on. The honey cinnamon will help fight off infection, relieve cough symptoms, and speed up the duration of a common cold. It is most effective if you take it at the first sign of cold symptoms, but can be taken any time during a cold.

The ratio of this honey cinnamon cough remedy is 1 part cinnamon to 4 parts honey. You can make it one teaspoon at time (1 teaspoon honey to ¼ teaspoon cinnamon) or make it in larger batches.

How To Make Homemade Deodorant – Simple, Natural and Effective