Whether your grandma called it Ambrosia Salad, 5 Cup Salad, or Sunshine Salad, let's bring back this old-fashioned fancy salad that goes well with ham or turkey for a special occasion meal, but is just as delicious as a light, refreshing dessert - topped with a maraschino cherry, of course! It's utterly simple to stir together, can be made ahead, and is a beloved old-time favourite! (Skip to recipe.) 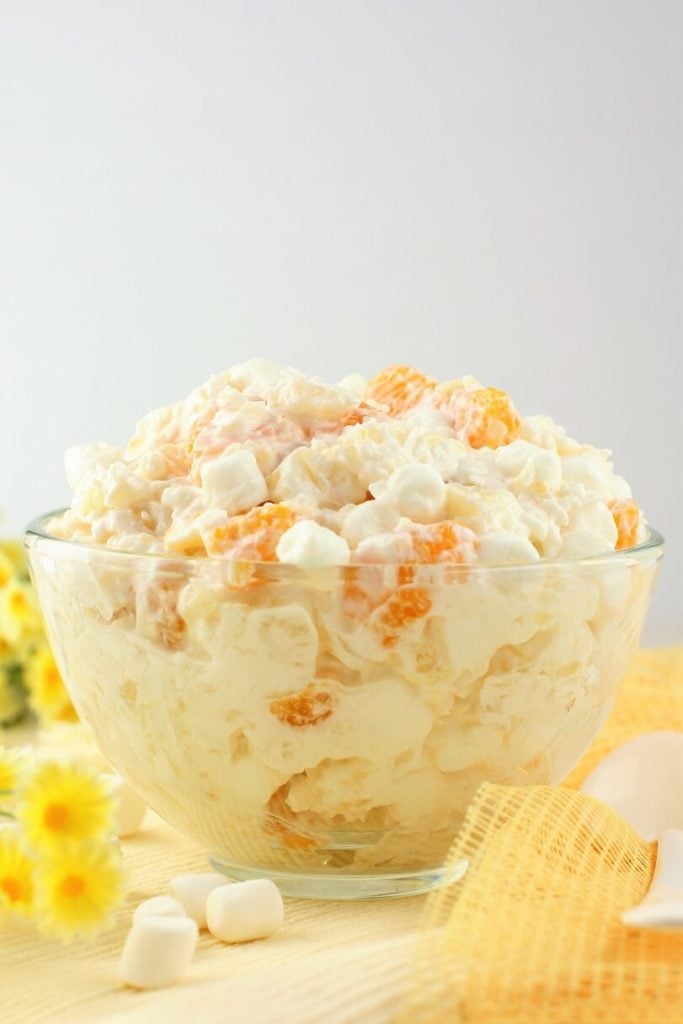 Okay, so it's got nothing green in it, can't even claim to have anything close to fresh vegetables in it; in fact it's loaded with the most unsaladlike ingredients you can think of (marshmallows! sweet coconut!), but it's still called a salad.

And it's absolutely delicious.

Ambrosia salad is really a type of fruit salad all dressed up for fancy company. It's got a pretty illustrious lineage, originating in the late 19th century and being named after the food of the Greek gods. Ambrosia was a type of nectar delivered by doves to the gods in Olympus and served at heavenly feasts. It was reported to bring immortality to anyone who ate it.

Well, some creative home cook, somewhere in North America (most likely the southern United States) in the late 1800s,  put together these 5 simple ingredients, took one bite and claimed it 'Ambrosia!' Over a hundred years later we're still feasting on this unlikely 'salad'. It comes in many iterations, some using whipping cream or whipped topping, some adding nuts, or maraschino cherries, or canned fruit cocktail, or diced fresh apples, bananas, or grapes. Others adding pudding, cream cheese, yogurt or cottage cheese. But most containing canned or fresh pineapple, mandarin oranges, mini marshmallows, and coconut.

Is it healthy? No. But it's meant to be a treat, a special occasion indulgence. And sometimes we just need that.

I was first introduced to this salad when I was dating my husband (many moons ago). My mother-in-law made it often and it was one of Raymond's favourite foods. When I was a newlywed I made Ambrosia Salad for my honey on special occasions or when I wanted to impress him (a pretty simple way to bring a smile to his face). I still made it occasionally when our kids were little, usually serving it as a dessert, and then it gradually fell off my radar, as some foods are wont to do.

Last week as I was browsing through my old handwritten book of family recipes, I was jolted back into remembrance of this beloved classic. I hadn't made Ambrosia Salad in probably twenty years. I thought of the many holiday tables where a bowl of this heavenly cloud-like salad had pride of place next to the ham or the turkey, or the times I'd made it as my idea of a romantic dessert for a Valentine's dinner for two, my husband sneaking spoonfuls of the leftovers from the fridge late at night. I remembered how much the kids liked this as a special treat whenever I served it.

And then I realized I had all the ingredients for this sweet salad in my pantry right now - with Easter less than a week away and me figuring out how to make the celebration special for just three of us stuck at home in self-isolation. It's time to bring back a smile to our faces. 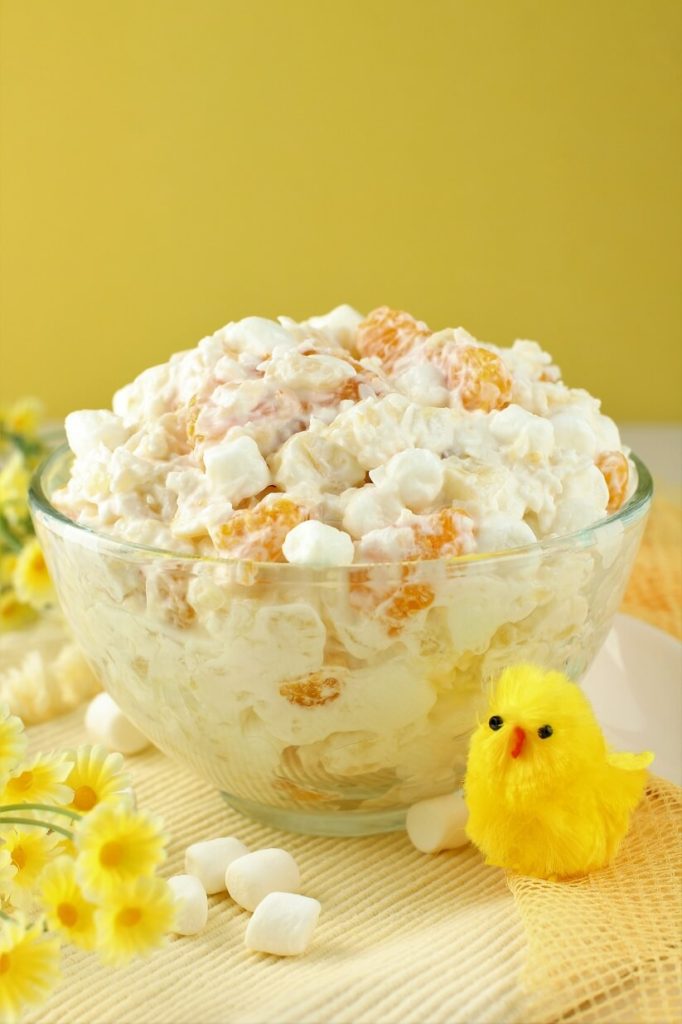 How to Make a Delightful Ambrosia Salad in Mere Mortal Minutes

You could almost snap your fingers and it would be done; that's how easy it is. But since you have no magic powers of the ancient gods, you'll have to open a few cans and tear open a couple bags. 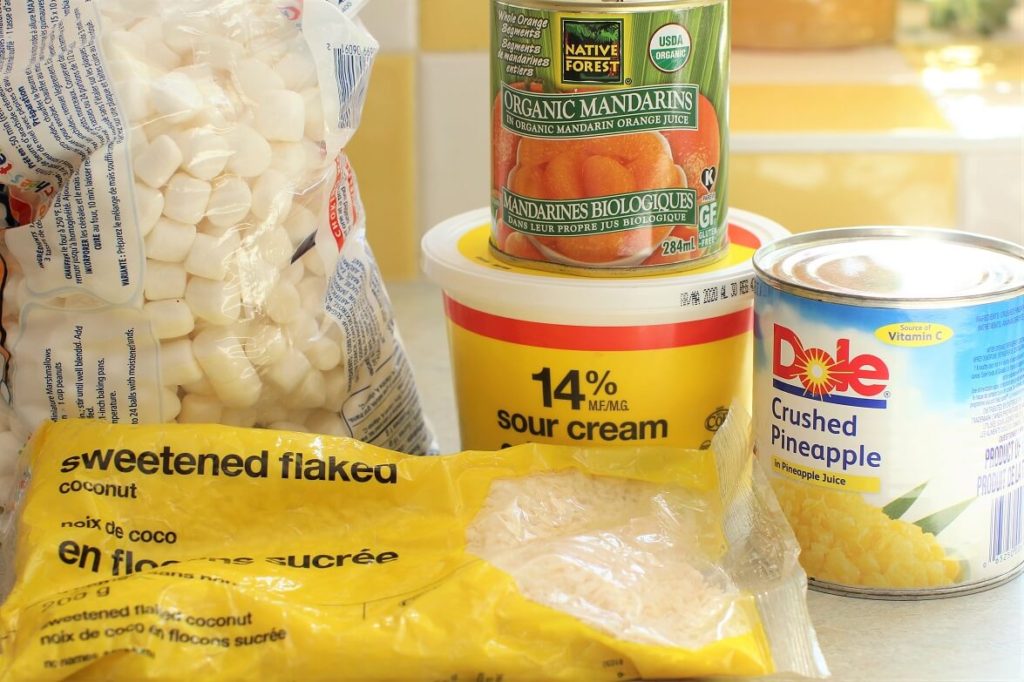 How easy is that? 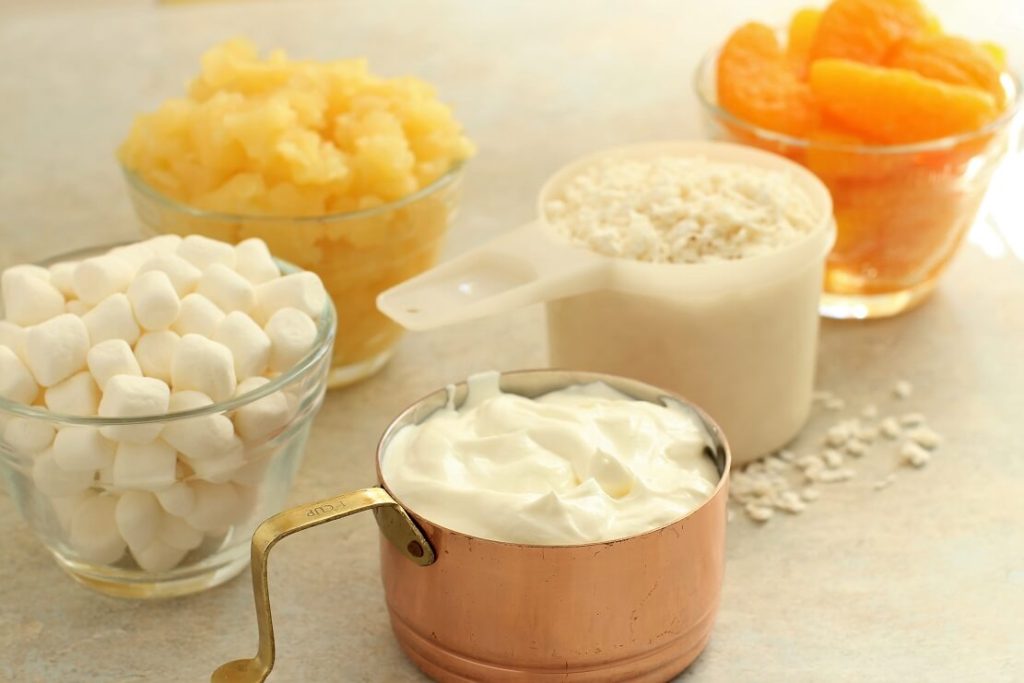 All it takes is 5 simple ingredients. The magic happens when you introduce them to each other and let them commune in the fridge; a divine amalgamation that can only be described as ambrosial. 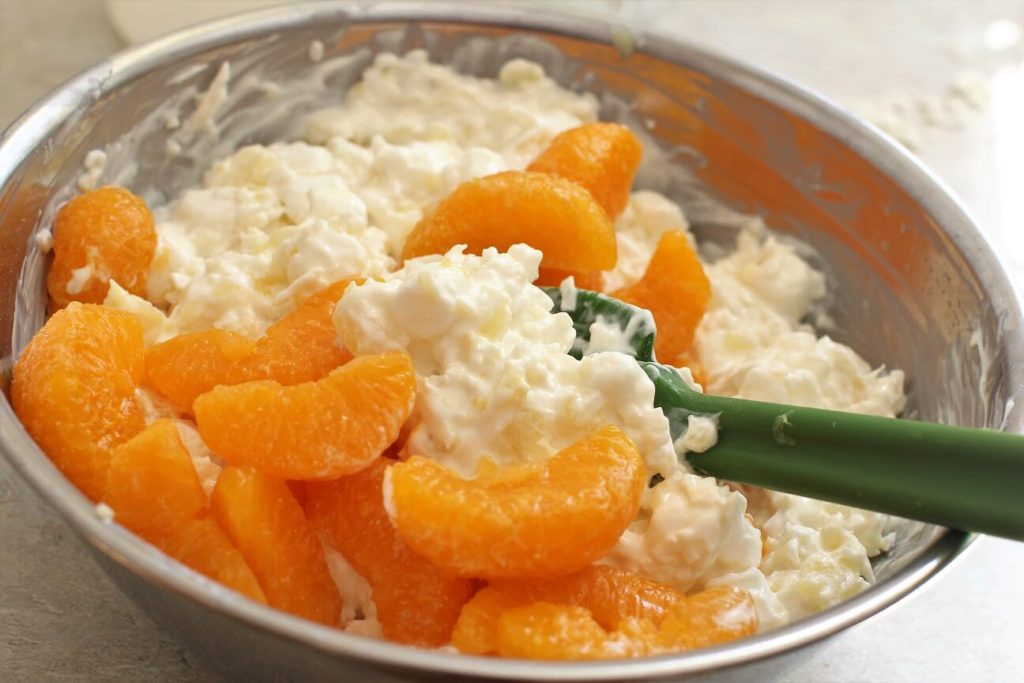 These 5 ingredients are the food of the gods for my mere mortal self, and I would never deign to tamper with them. However, if you feel inclined to tempt fate and live a little dangerously, feel free to change up the ingredients to your liking. Just don't blame me if you don't have the powers of immortality anymore.

What's so Special About Ambrosia Salad? 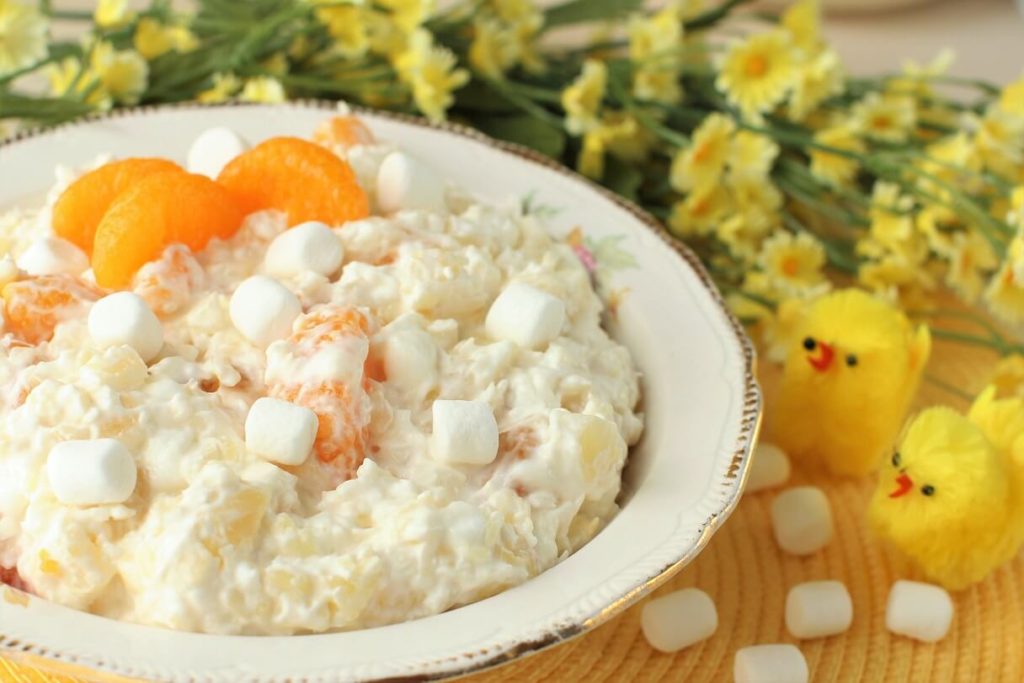 If you want a different kind of fruit salad that's also elegant and dressed up for company, try this award-winning Ruby Red Glazed Fruit Salad with several colourful jewel-toned variations.

Kitchen Frau Notes: Full fat sour cream (14% fat) makes the creamiest flavour for this salad - and since it's a special salad for a special occasion, why not have the best! (Though if you wanted to substitute Greek yogurt for the sour cream, I'm guessing it would still be tasty, though I wouldn't do that if I was serving it for dessert.)

To make Ambrosia Salad dairy-free, you can substitute the sour cream with coconut yogurt. 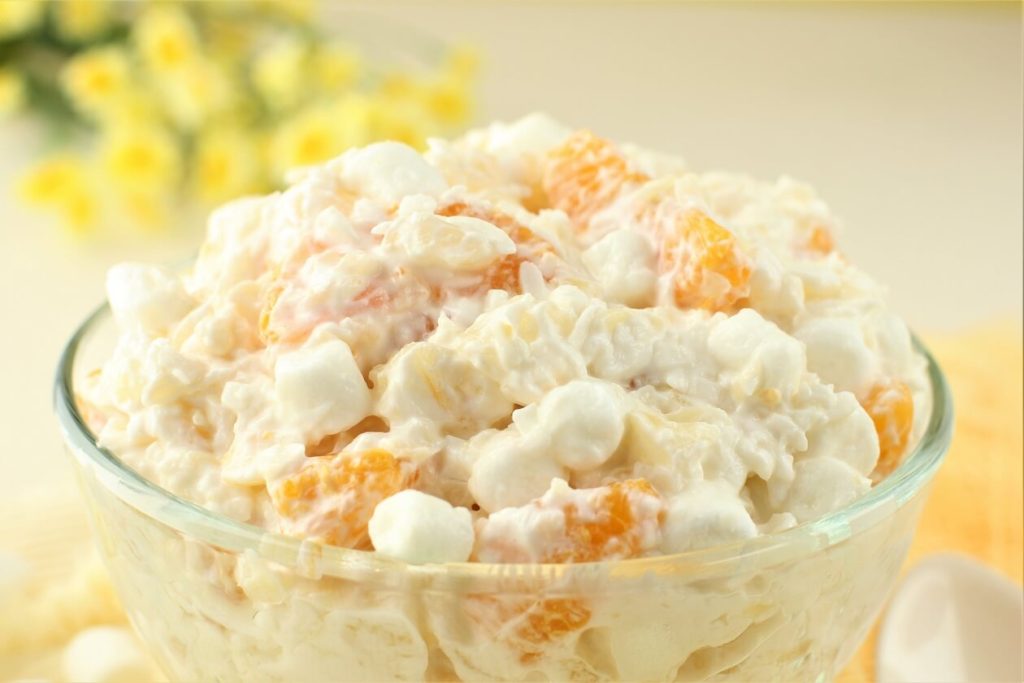 Drain the pineapple in a sieve, shaking it a bit to remove as much juice as possible. (Save the juice of the pineapple and oranges to add to fruit punch or to dilute with sparkling water as a refreshing drink.) Tip the pineapple into a bowl, and add the mandarin oranges to the sieve to drain while you stir up the rest of the ingredients.

Add the sour cream, marshmallows, and coconut to the drained pineapple and stir together to mix them.

Tip the drained mandarin orange segments on top, and fold them in gently in order to keep the segments as whole as possible.

The salad can be made up to 24 hours ahead, but it tastes best when made 4 to 6 hours ahead. It will keep in the refrigerator for up to 3 days, but will get a bit watery - just stir gently before serving again.

Makes a sweet side salad when served with ham or turkey, or a delicious, light dessert served in stemmed glasses and topped with a maraschino cherry. 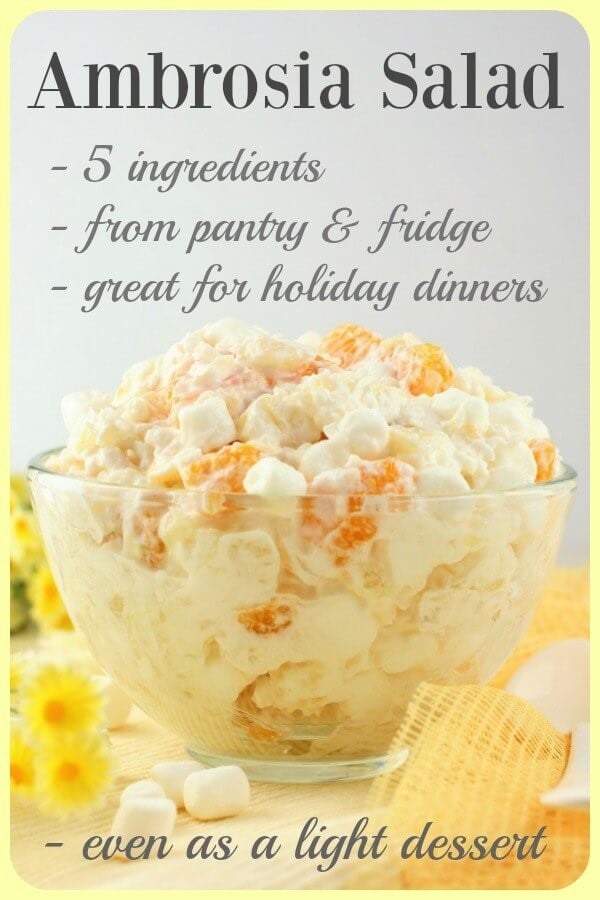 Hot Curried Peaches to Serve with Baked Ham or Turkey