A luscious lemon meringue pie is on the top of the favourite-pie-list for many people. Make this beauty from scratch for the lemon lovers in your family. A smooth and silky custard that’s tart and intensely lemony topped with a soft billowy meringue – it’ll satisfy every lemon pie craving. (Skip to recipe.) 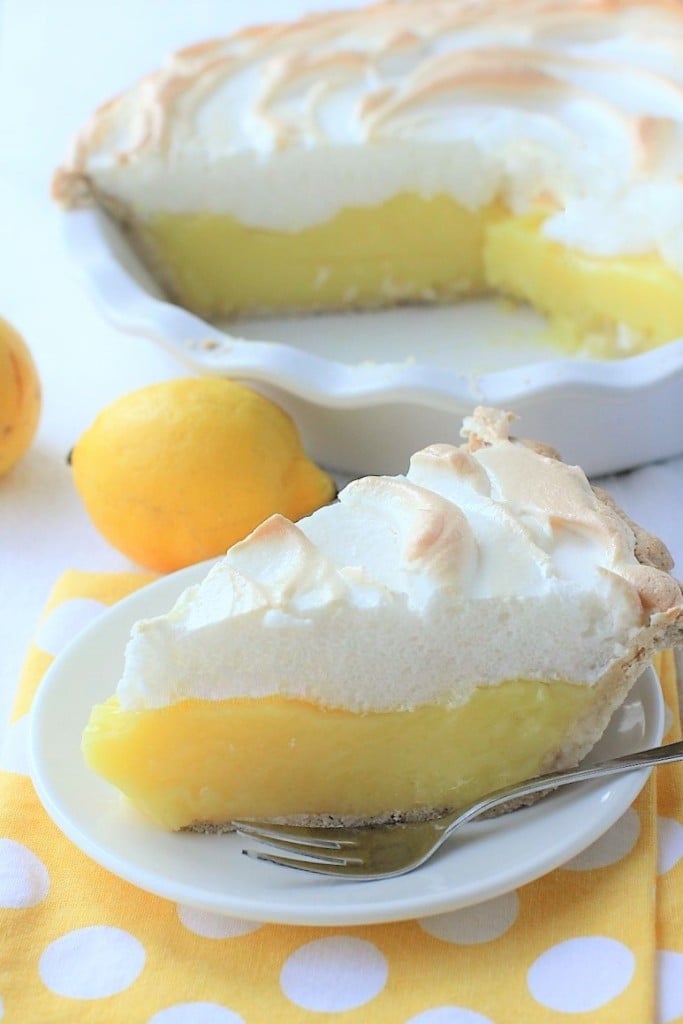 A crispy flaky crust, shattering when the fork hits.

Pillows of fluffy meringue, sugar-kissed, melting on your tongue.

Okay, in case the picture didn’t give it away – I’m a LEMON MERINGUE PIE!

(And I’m the favourite flavour of a lot of pie-lovers around here.)

As I’ve mentioned before, I didn’t grow up eating pie. My German mom was more into making delicious cakes, and strudels, and tortes. I only got ‘into’ pies once I met my husband, whose meals throughout his childhood were defined by the kind of pie they ended with. I had never seen such a glorious selection of pies as those my mother-in-law baked each and every week of her life while her kids were at home. So, naturally, my kids became pie lovers, too. It was in their genetics – and their granny fostered that pie-loving gene by feeding them an astonishing array of pies every time we visited the farm over the years. Pie for dessert. Pie for snacks. Pie for breakfast. And usually a pie to take home with us, too.

Every child had their favourite pie (or two), and I think that changed with the seasons. I mean, there was apple pie, and cherry pie. Saskatoon pie, bumbleberry pie, and peach pie. Plum pie (my favourite), wild blueberry pie, raspberry pie, and strawberry-rhubarb pie. There was raisin pie, mincemeat pie, and pumpkin pie, not to mention, flapper pie, banana cream pie, custard pie, and pecan pie. She also made lemon coconut pie, German chocolate pie, coconut raspberry pie, chocolate cream pie, and even turnip pie. But she always had a lemon meringue pie amongst the mix (my other favourite pie.) It was also the favourite pie of a lot of her huge brood of children, grandchildren, and great-grandchildren.

And it was Grandpa’s favourite pie.

Our beloved Grandpa passed away in January of this year. It was a tough time for all of us. He ended a 16-month long battle of complications from a stroke and quietly slipped away, after 96 years of life lived to the fullest. This amazing man was still driving his truck until almost 95 years old, playing cards and telling his dry jokes until his last weeks. He saw a lot of changes in his lifetime. When he was born in 1920 to a homesteading farm family in northern Alberta, life was hard. Travel was by horseback and physical labour was the only way to keep a roof over your head and food on the table. Schooltime in the one-room country schoolhouse was a holiday from the work waiting at home. Joining the army as a young man to fight for our freedom in World War II was a call inside him he couldn’t deny. And coming home after the war to provide for his family and raise his children on the farm with his wife Mabel was his greatest pride. They were a great team.

Marvin was a humble man, gentle and kind, but raising his children with a firm hand that didn’t tolerate any straying from his strong core values and principles of honesty and hard work. He was always so grateful for everything he had and would often shake his head in bemusement over how lucky he was to have the life he lived and that his children were all doing well. I think his hard childhood and the experiences he had in the war shaped that gratitude. He loved the land, hunting and fishing, playing ball, and curling. He had a quick and witty sense of humour. Our boys laugh out loud remembering all his crazy old farm sayings (most of them too off-colour to mention here!) And he had this way of lighting up whenever you came to see him, saying ‘Well HELLO there!” with a big smile when you arrived.

After he died, I asked my mother-in-law what Marvin’s favourite pie had been. When she said ‘lemon meringue pie’ I became obsessed with making a lemon meringue pie that would honour him. Mabel had always used a packaged mix that she doctored up with real lemon juice and other ingredients. (That is the only pie she ever used a box to make, and even then she added her own special tricks to it. Fresh lemons were scarce and expensive in country stores years ago.) 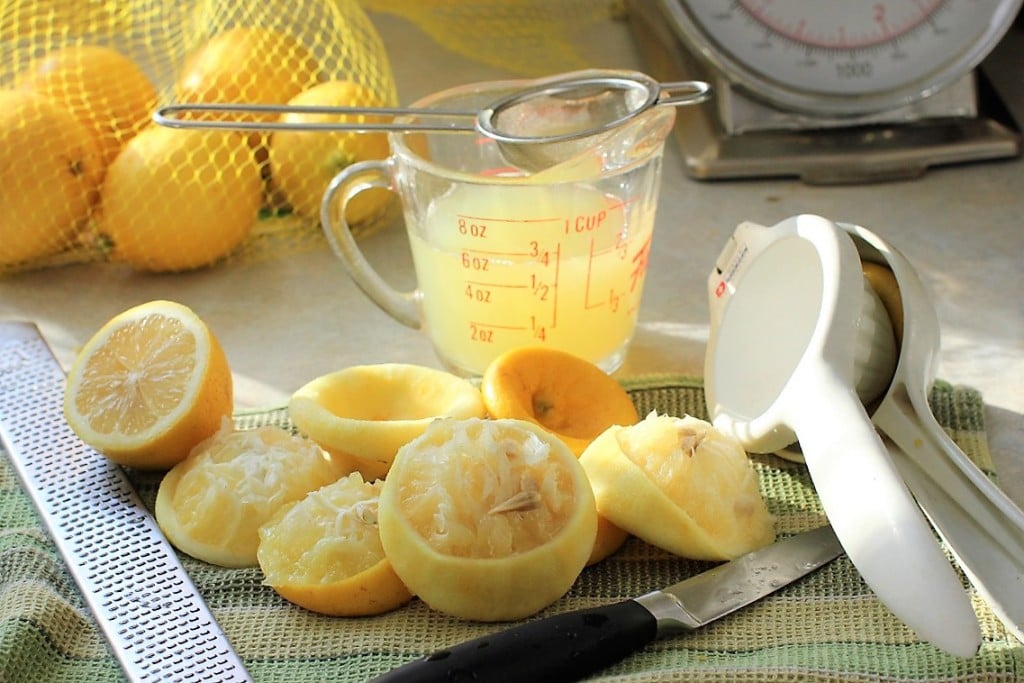 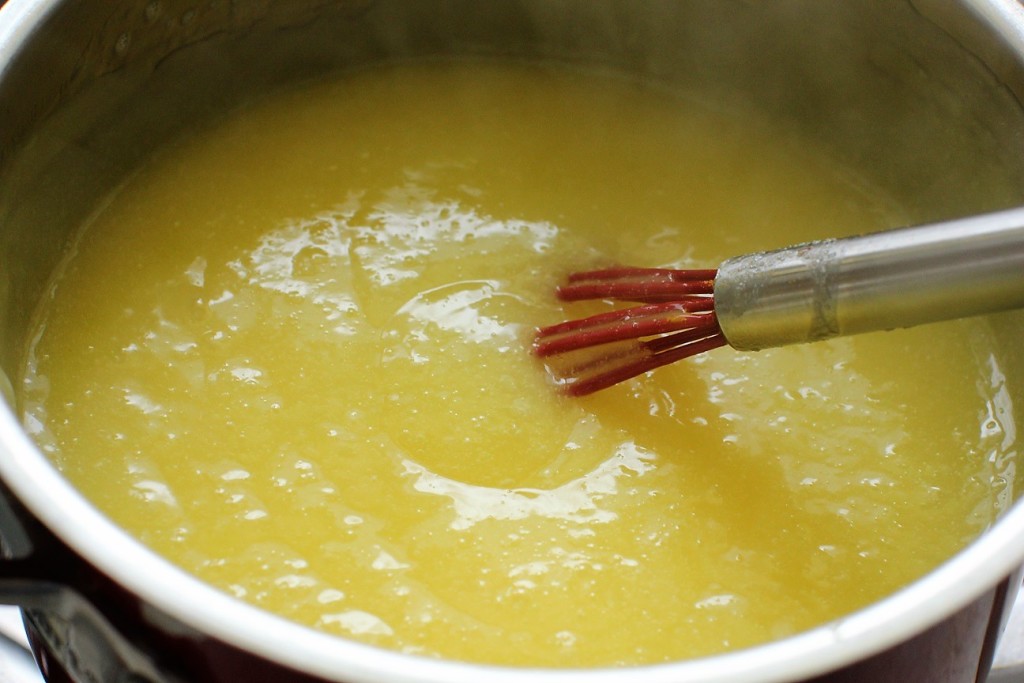 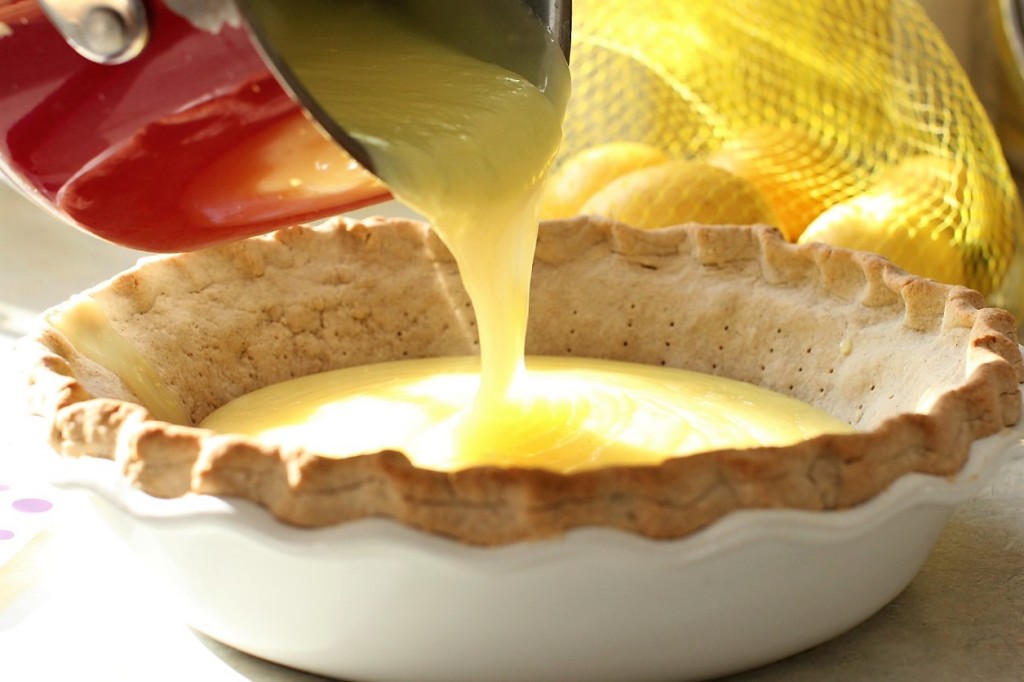 So after about eight pies, I finally got the recipe perfected, tweaking it slightly every time (I tried using different flours to thicken it, but no go). I’ve borrowed Mabel’s method of cooking the lemon zest in water and using that to add another layer of flavour depth to the filling. This pie is tangy and bright and big. It’s a slice of lemony sunshine on a plate, and when I eat it I think of my father-in-law. 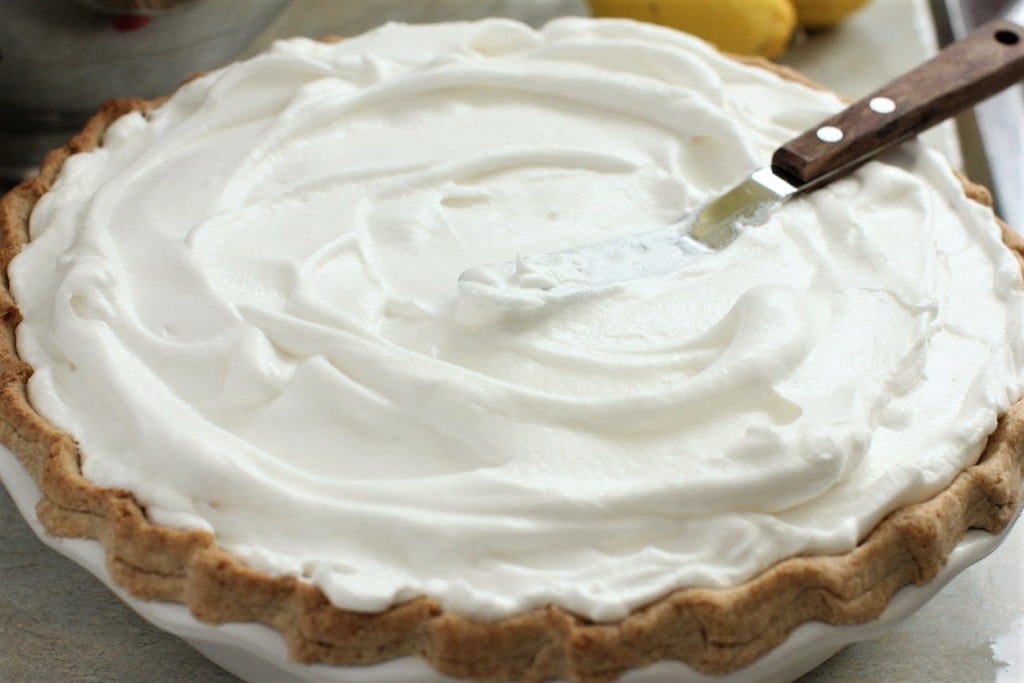 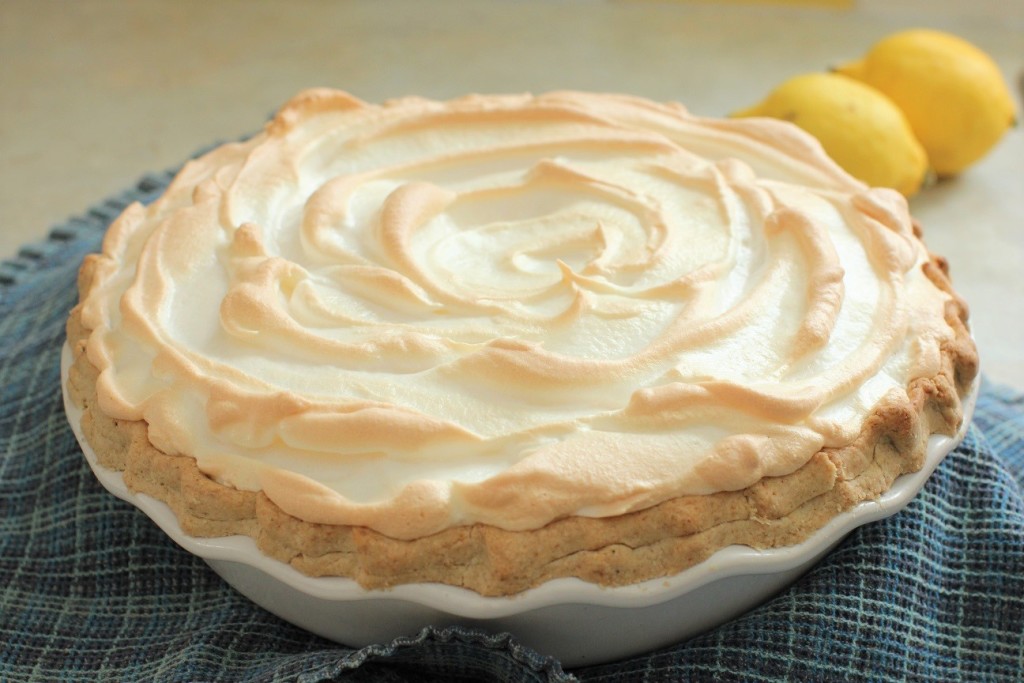 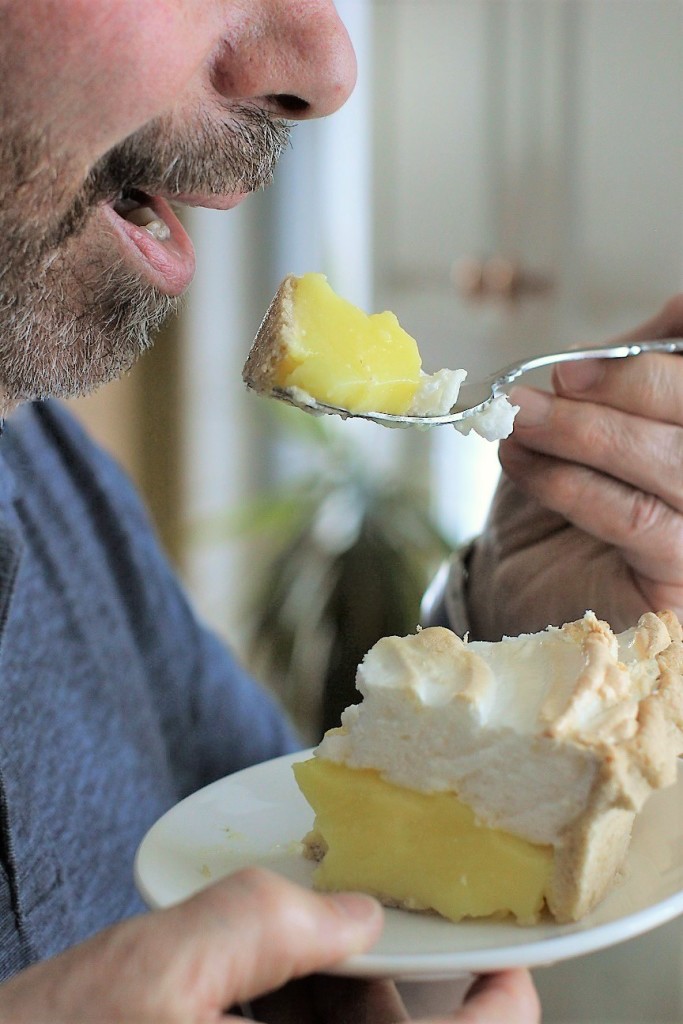 Kitchen Frau Notes: This is a large pie, so if you only have a regular 9-inch pie shell, pour some of the extra filling into a small oven-proof dish and cover it with a bit of the meringue to make a lemon meringue pudding.

Whenever I use the zest of lemons, I try to make sure they are organic, since the peel is where most of the chemical sprays accumulate.

Lemon meringue pie is best when eaten within a day, as sometimes the meringue will ‘weep’ a bit if kept longer – although the extra cornstarch added in the recipe below helps prevent that happening too soon. Make sure to spread the meringue so that it seals to the crust all the way around and can’t pull away from the crust as it cools.

Keep the pie uncovered at room temperature or in the refrigerator for up to a day, though it usually doesn’t last that long – it’s pretty delicious for breakfast – after all it’s got eggs and fruit in it, right? 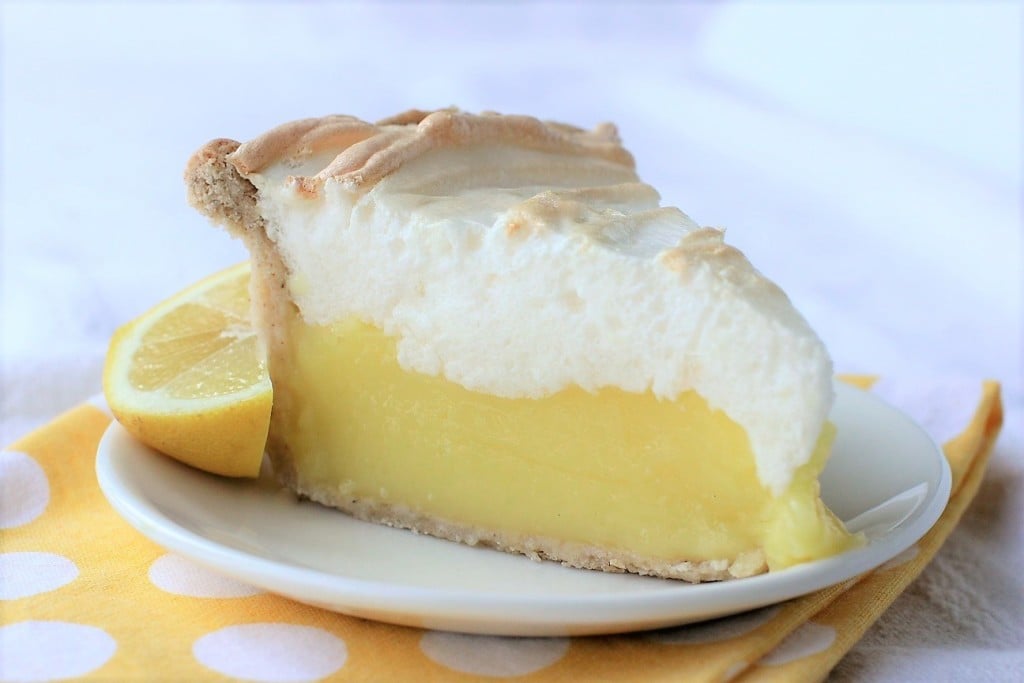 Roll out the pie crust to fit the pie pan. (If using the gluten-free crust, roll it between two sheets of parchment paper – see photos for an easy way to do this at the bottom of this post.) Trim and crimp the edges. Prick all over with a fork. Place in the freezer for 30 minutes.

Bake the chilled pie crust for 10 to 12 minutes, until the edges are golden. Allow to cool to room temperature.

Prepare the filling: Combine the 2 cups of water with the lemon zest in a medium-sized saucepan. Bring to a boil, then reduce the heat a bit and cook at a low boil for 3 minutes. Strain through a fine meshed strainer into a 2-cup measuring cup. Press down on the lemon zest solids with the back of a spoon to extract as much of the liquid as possible. Top up the lemon liquid with water to make 2 cups (480ml).

Rinse out the saucepan to remove any bits of lemon peel adhering to the sides, and return the lemon water to it. Add the fresh lemon juice.

Whisk the egg yolk mixture into the lemon water in the saucepan. Heat over medium-high heat, stirring constantly, until it comes to a full rolling boil, then cook for 15 seconds more.

Remove the filling from the heat and stir in the butter. Cool 5 minutes, stirring twice.

Whip the egg whites with a pinch of salt until soft peaks form. Mix the cornstarch with the sugar in a small bowl. Sprinkle it over the egg whites, then continue beating until glossy. Don’t over-beat or the meringue will be hard to spread. Add the vanilla and beat for a few seconds to incorporate.

Pour the slightly cooled filling into the baked pie shell. Dollop tablespoons of the meringue evenly on top of the filling. Using a butter knife or small offset spatula, gently spread the meringue to fill the spaces between dollops, and spread it to the edges of the crust, making sure it is sealed to the crust all the way around the edge of the pie (to prevent shrinkage). Use the knife or spatula to makes swirls over the top of the meringue.

Bake the pie in the preheated oven for 15 minutes, until the swirls are golden brown.

Allow to cool completely – at least 4 hours – before slicing. Store the lemon meringue pie at room temperature, uncovered, for up to 24 hours.

Don’t forget to PIN IT if you want to save the recipe for later:

Can She Bake a Cherry Pie, Billy Boy?