Making gluten free pie crust can be a hassle, so while you're at it, make a large batch for the freezer. You'll love pulling out a bag of this tender, flaky crust mix and being able to whip up a pie, tart, or quiche quickly with no mess. (Skip to recipe.) 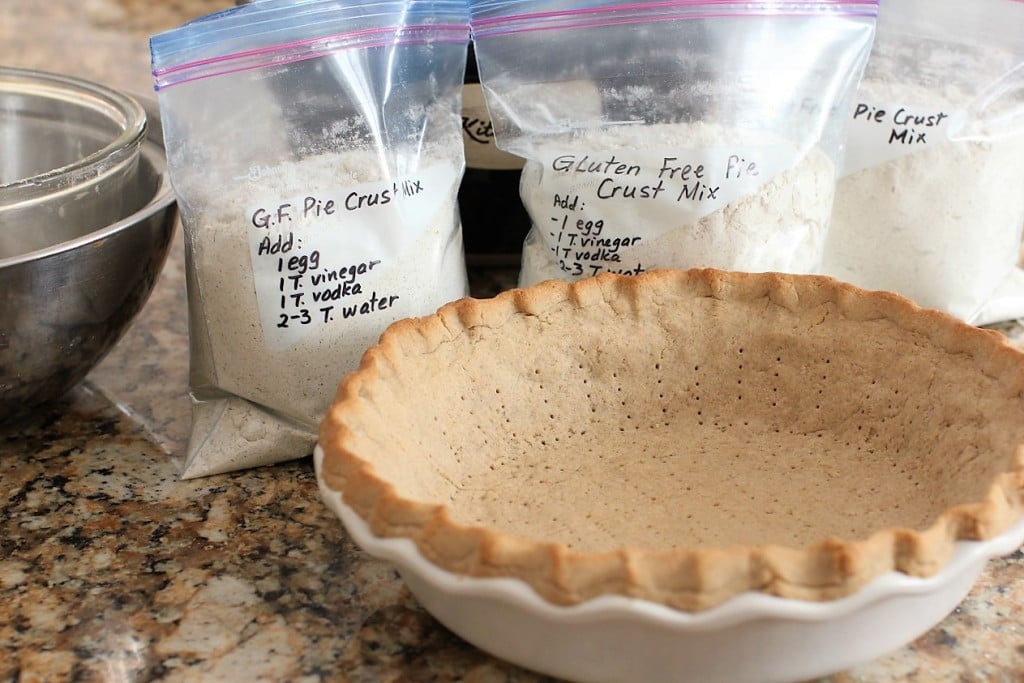 I love eating pie and quiche, but I hate making gluten free pie crust. It's a pain to get out all the flours and fiddle with the lard and shortening. I can usually find ways to talk myself out of making pastry and we sadly go without the delicious pie I've been craving.

When you grow up in a big farm family, everything is prepared in huge batches. Raising our own four kids was no different - monster batches of food to feed the hungry hordes of teenagers and friends. So why didn't I think of making my gluten free pie crust in large batches before? Duh . . .

Now that I've started making big-batch gluten-free pie crust mixes for the freezer, we can have pie any time the urge strikes. This crust turns out wonderfully tender and flaky every time. The dough is easy to work with, and because it contains a high ratio of whole grain flours (oat and sorghum), it adds a good dose of healthy fiber to a dessert or quiche. (I'm good at justifying.)

To make the big batch, I just pull out four mixing bowls and since I've got the bags of flours and ingredients out anyway, it doesn't take much more time to multiply everything by four. 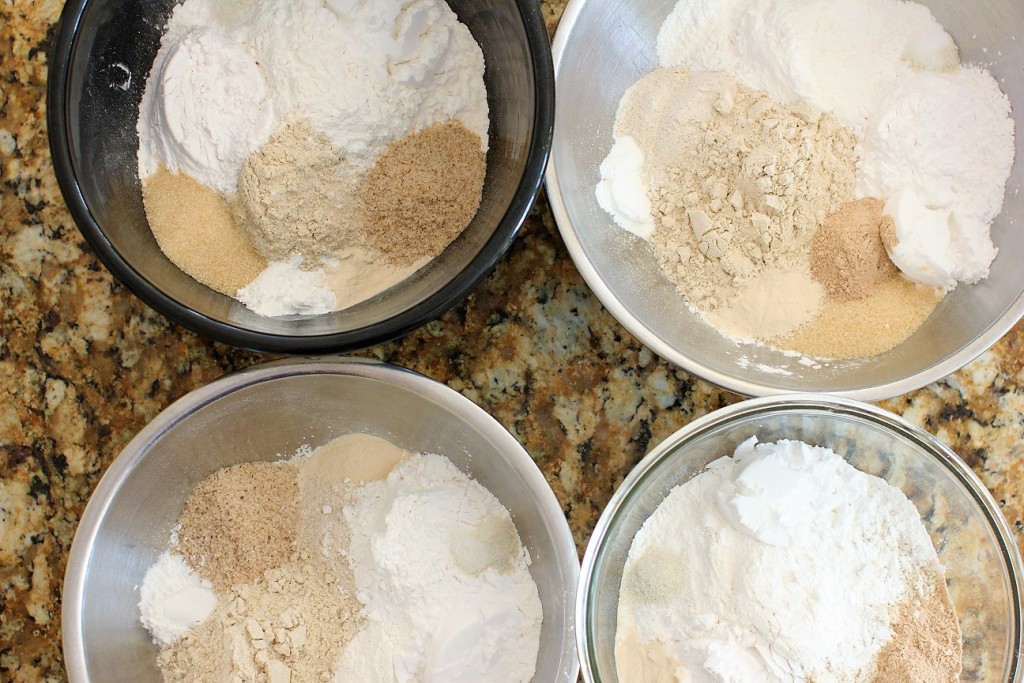 I add the cubed lard and butter, then mix it to coarse lumps with a pastry blender. 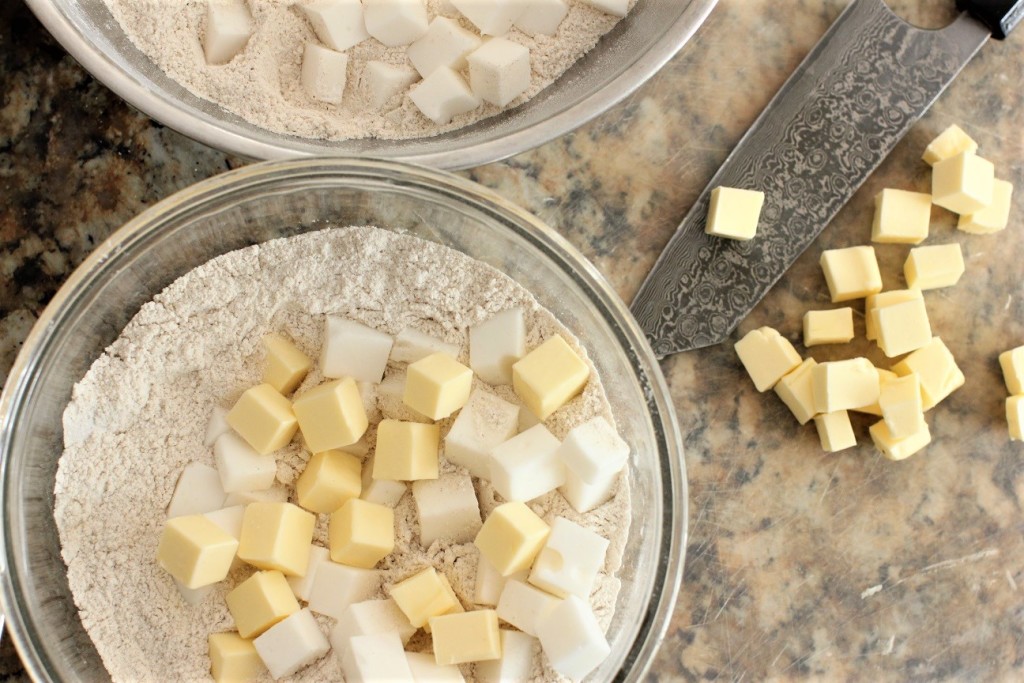 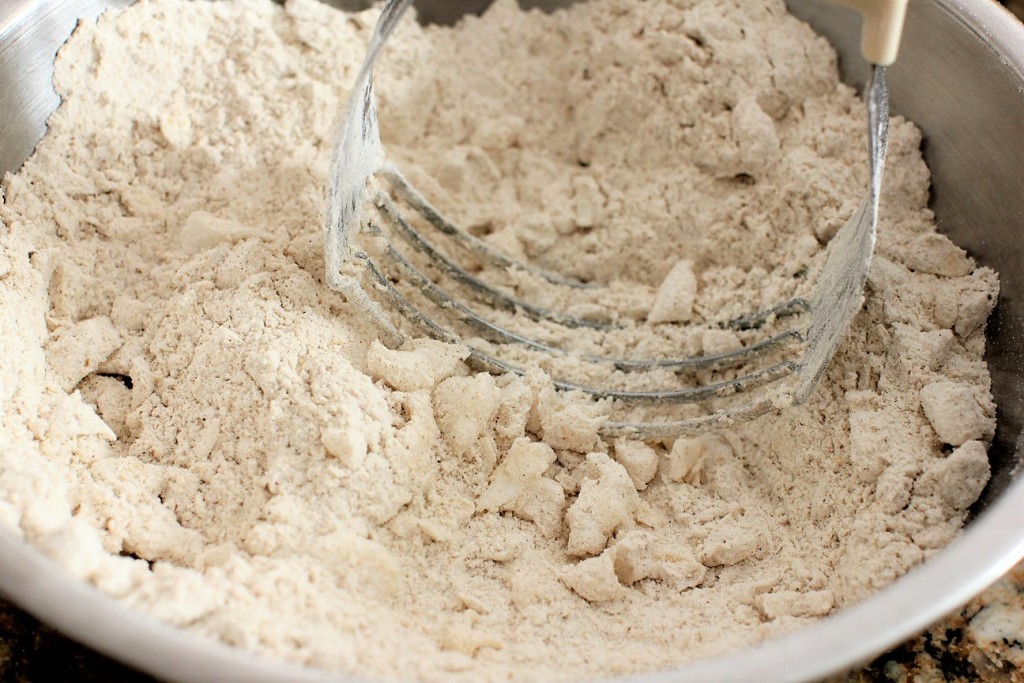 Then I freeze each batch in a ziptop freezer bag, labeled with the ingredients to add when mixing. 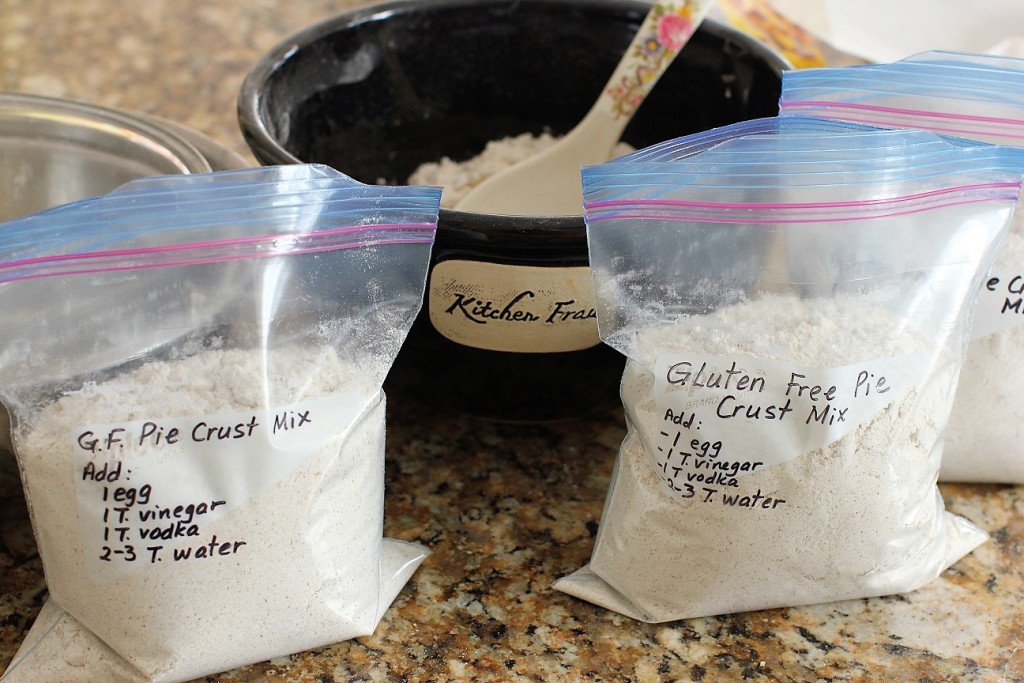 Each bag makes two crusts, either for a double crust pie, or if I only need a single crust I make the two discs of dough - use one and wrap the other one to keep in the fridge for up to two weeks for another pie.

Roll out the pie dough between two sheets of parchment paper. See this post for special tips and photos of how to mix and roll out a gluten free pie crust. 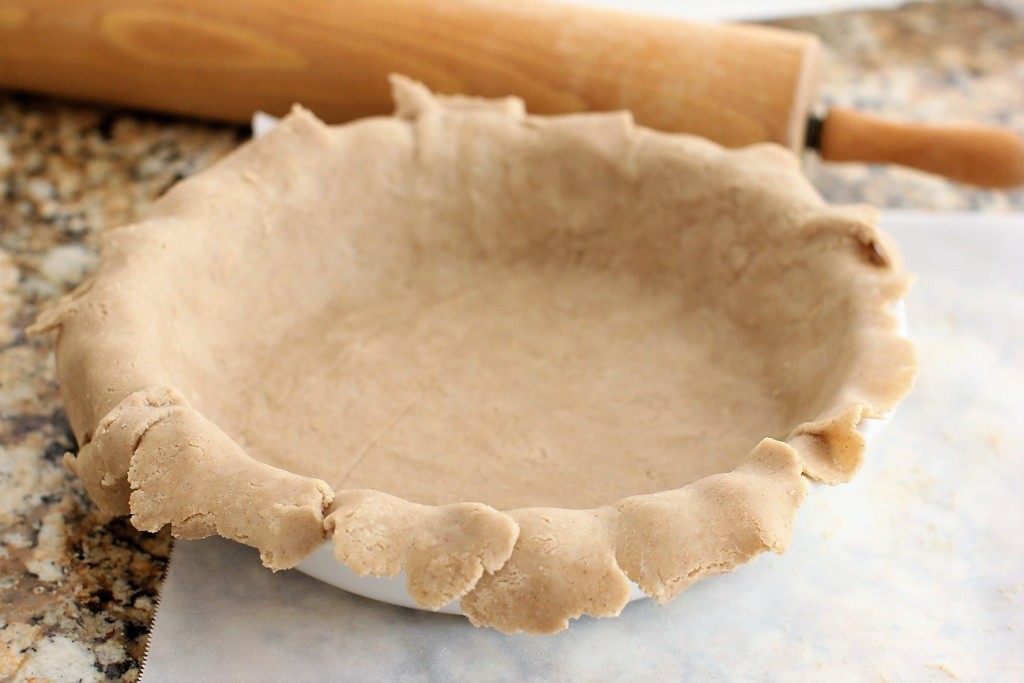 Trim off the edges. 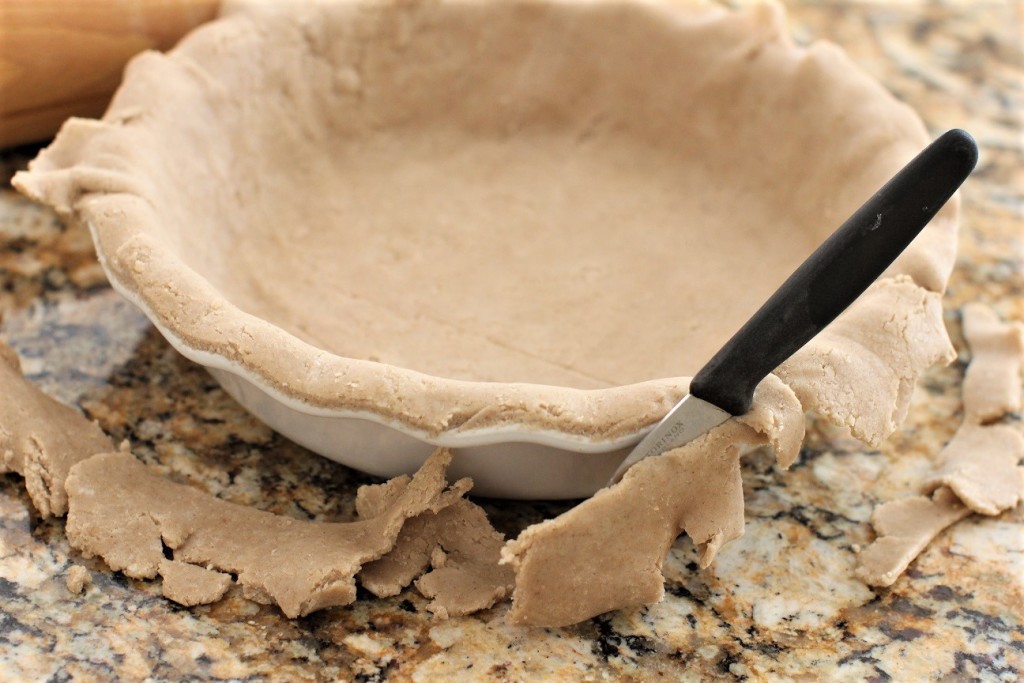 Then fill the pie and roll out the other disc of dough to add the top crust. Or for a single crust pie, crimp the edges. I like to build up the height of the pie a bit by using the scraps to roll into thin ropes, then pressing the ropes onto the crust edge to form a ridge. I then crimp this raised ridge. 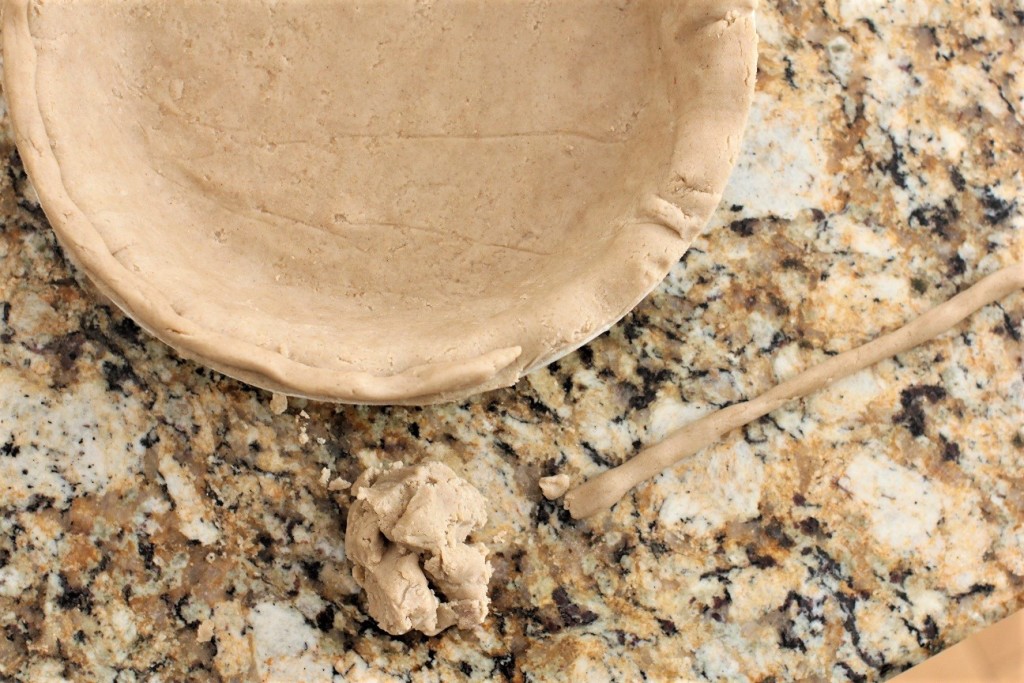 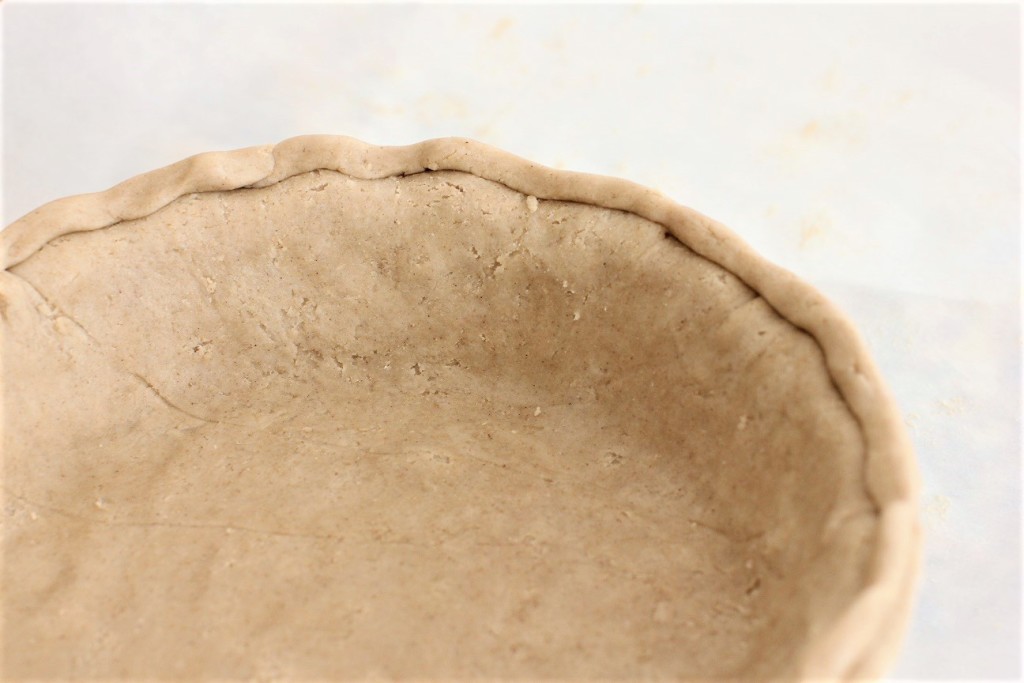 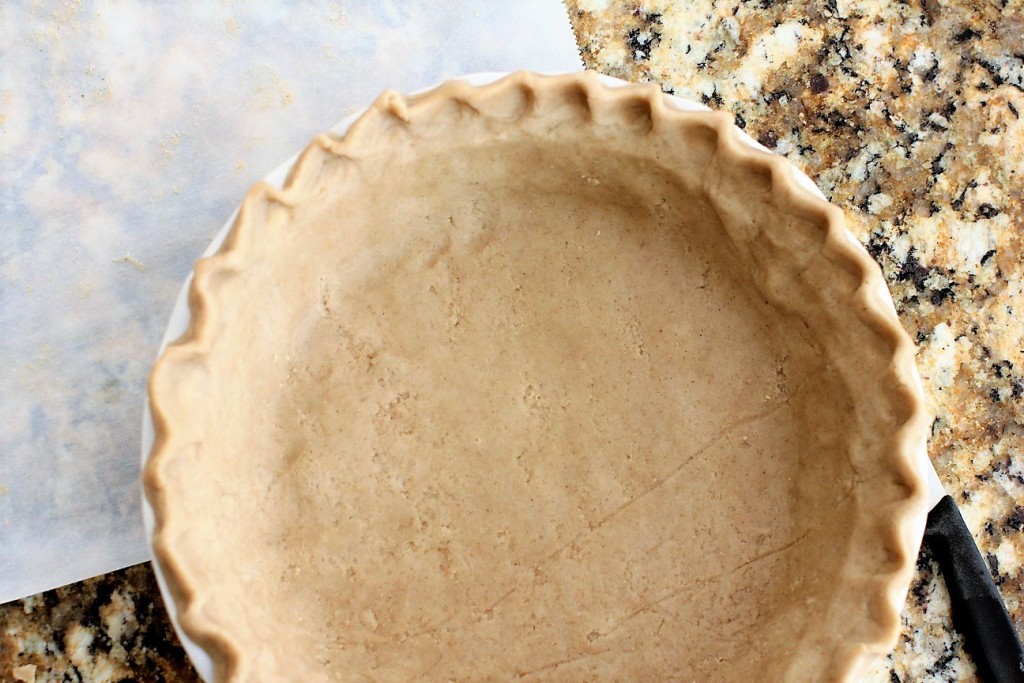 To prebake the pie crust before filling, prick it all over with a fork. 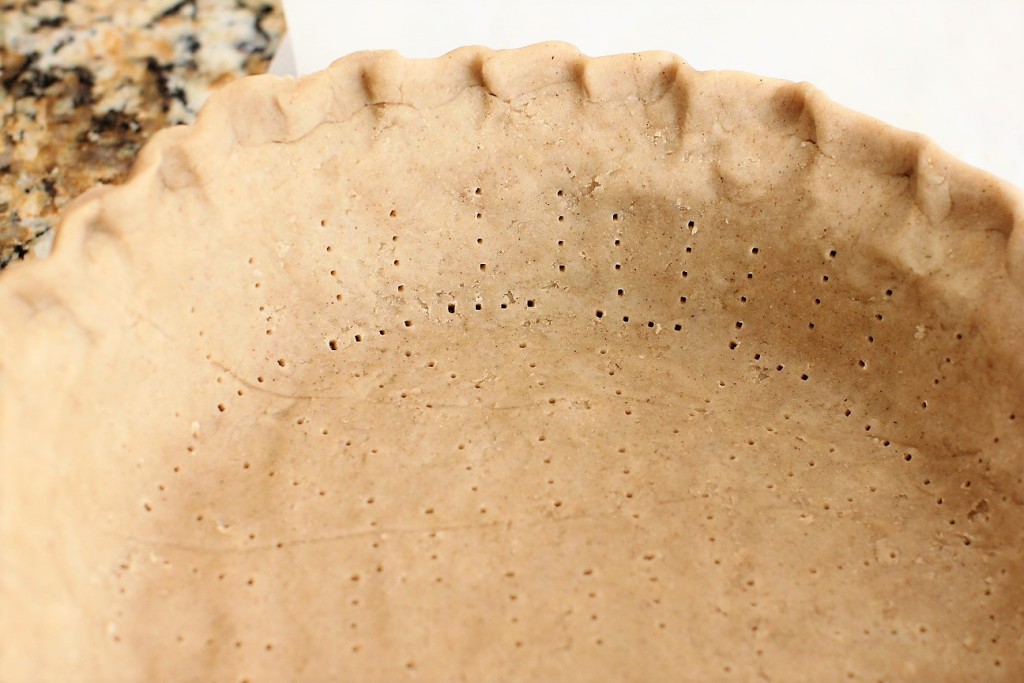 Chill it for 30 minutes, then bake at 425°F for 10 to 12 minutes. This gluten free pie crust sticks to the pan so well it doesn't need to be weighted down with pie weights or dried beans to bake, like regular pie crust does.

Kitchen Frau Notes: To make up this gluten free pie crust mix, I like to use one tablespoon of vodka, as I think it makes a more tender crust, but you can easily leave it out and just use an extra tablespoon of water - change the directions to use 3-4 tablespoons water.

With some batches (I don't know why - flours differ) I end up having to use an extra tablespoon or two of water before the dough comes together and starts clumping.

You can also just use the measurements for a single batch below, if you don't want to make a big quadruple batch. 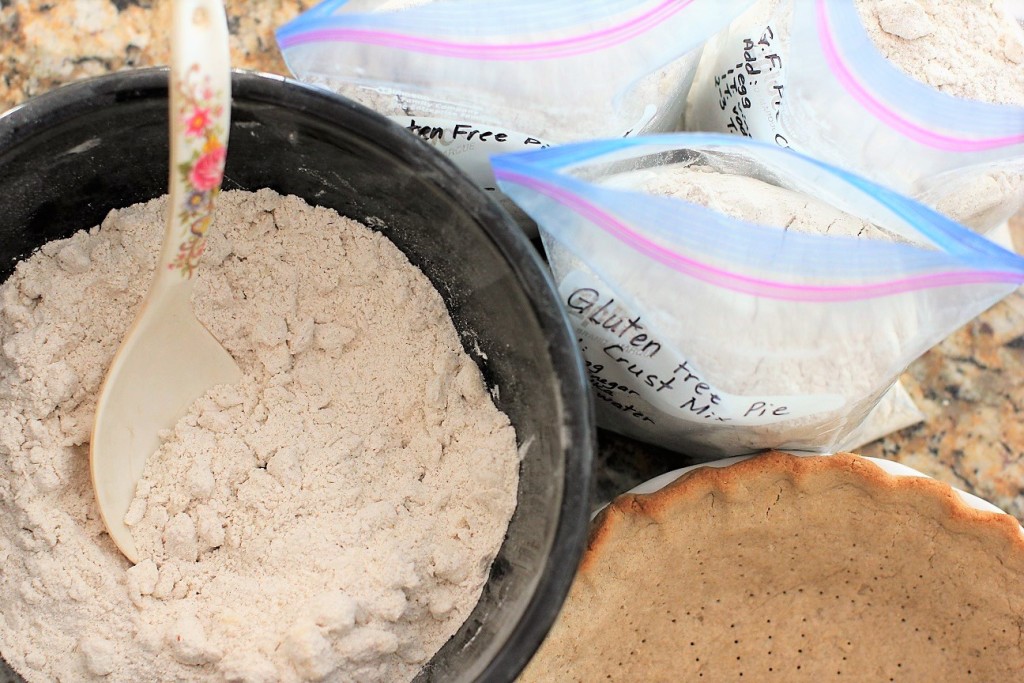 In total you will need these ingredients to make four batches (which make 8 single crust pies or 4 double crust pies):

To make the four (or more) separate batches of gluten free pie crust mix, set out four (or more) mixing bowls (use pots if you don't have enough bowls).

Into each separate bowl, measure:

Whisk these dry ingredients together in each bowl.

Then, into each bowl add:

Use a pastry blender or two butter knives to cut the lard and butter cubes into the flour until they become coarse, pea-sized lumps.

Transfer the contents of each mixing bowl into a separate freezer bag  on which you have labeled:

The dough can be mixed by hand or in the food processor.

Some batches of flour absorb more water than others, so when making up the dough, if you've added the 3 tablespoons of water and your pastry dough still doesn't come together, keep adding water about ½ a tablespoon at a time until the dough just comes together when you squeeze a handful. Knead a few more times until it forms a rough ball.

*To make the pie crust mix dairy-free, use all lard, or use dairy-free margarine instead of butter.

*To make the pie crust mix egg-free, use a chia egg (1 tablespoon ground chia seeds soaked 5 minutes in 3 tablespoons water) instead of a regular egg, when preparing the crust.

Can She Bake a Cherry Pie, Billy Boy?