Serve up a warm, comforting bowl of creamy baked oatmeal, and mornings will never be the same again! You can add in all sorts or variations to customize it, make it ahead and reheat it, or even freeze it. (Skip to recipe.) 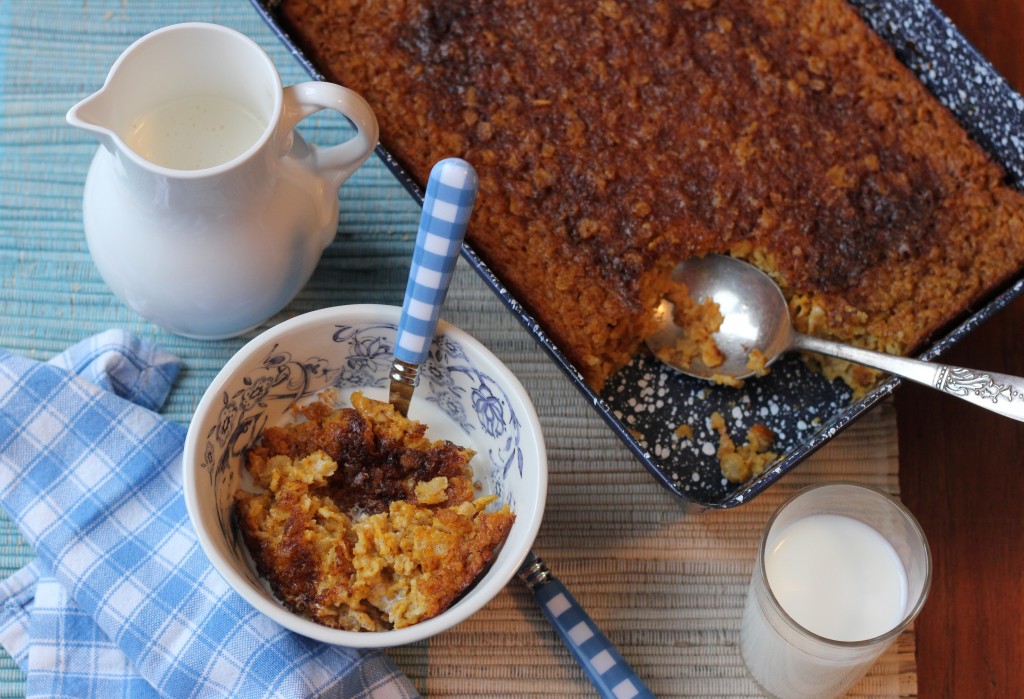 When the icy winds of winter blow - as they are right now here in Alberta - you need a breakfast that sticks to your ribs . . . oatmeal.

Hearty, filling and tasty. (Not to mention full of fiber and nutrients). But maybe you're not in the mood for stirring a pot of long-simmering oats, or don't have the time on busy weekday mornings, and maybe you're tired of those packages of instant, over-sweetened sludge.

Baked oatmeal is the answer you've been looking for. Tasty and full of chewy oat texture, this breakfast dish will change the way you look at your morning oats. It tastes enough like a dense cake or muffin to make you feel like you're indulging but has the comforting warmth of a bowl of creamy porridge to satisfy your winter cravings. It needs no adornment, but a drizzle of maple syrup and a slosh of cream or milk does turn it into something divine.

Countless recipes are floating around on the internet for this way of preparing oats. I first saw it as Amish Baked Oatmeal (but have forgotten the source). Heidi Swanson, in her 'Super Natural Every Day' cookbook adds nuts and fruits, Kath of Kath Eats Real Food gave me the pumpkin idea. There are so many ways to make this dish yours.

Here is my basic recipe - you can add your own variations. On days I have to work, I like to make it the night before, then leave it on the counter, covered with plastic wrap. In the morning everyone scoops out a portion and pops it in the microwave to reheat (if there's any left after the little house elves have got to the pan the night before, thinking it's some kind of dessert or snack. Don't laugh - with a hungry teenager in the house, this is a definite possibility!). Or you can measure out the wet and dry ingredients into separate bowls the night before, then when you first get up, stir them together and pop them in the pan to bake while you get ready. 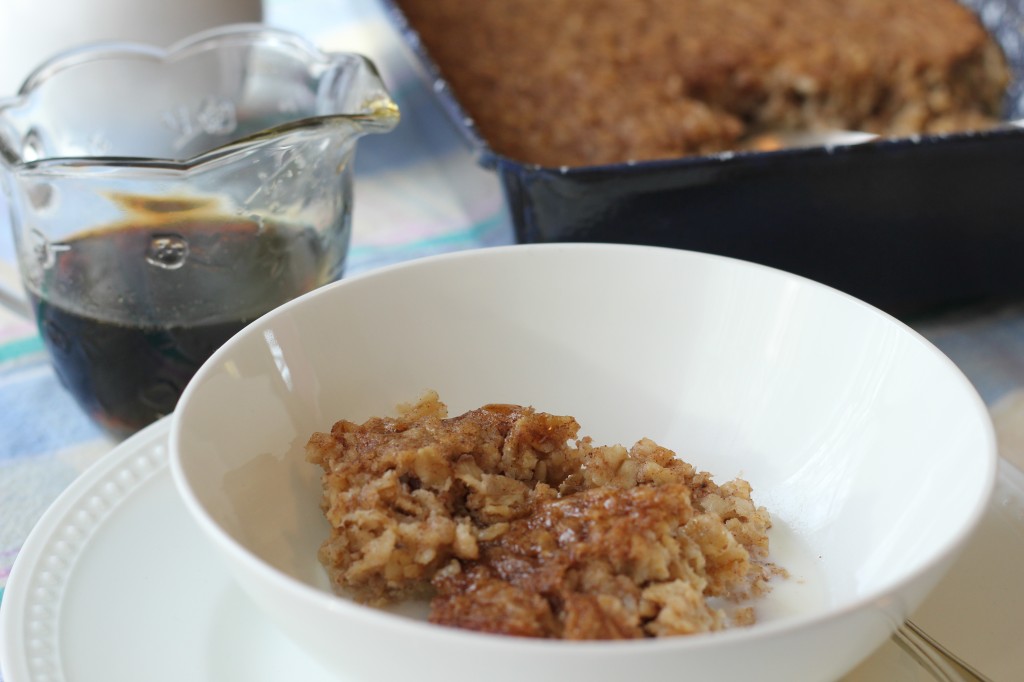 Kitchen Frau Notes: I like to use large-flake (old-fashioned) oats for baked oatmeal because they retain their texture and make for a deliciously chewy dish. Quick-cooking oats may take a little less time to bake, but become much denser and 'stodgy'. I think the extra baking time is worth it.

The 'generous ¾ cup' of pumpkin is equal to half a  14 oz/398ml can of pumpkin puree (not pie filling). If you're feeding a crowd or want this to last for several breakfasts, double the recipe, using the whole can of pumpkin puree, and make it in a 9"x13" pan. Bake for 5 minutes longer.

Our favourite version is the pumpkin one - so creamy and comforting. But the banana one is yummy, too, especially with a spoonful of peanut butter allowed to melt on top of it. I haven't tried it yet, but I imagine a handful of dark chocolate chips thrown in with the banana baked oatmeal wouldn't be too bad at all, either. The applesauce version is milder flavoured but quite sublime with a handful of fresh or frozen blueberries thrown in before baking, or a few raisins and maybe another half teaspoon of cinnamon added.

You can also vary the spices. Try it with some ginger added, or a bit of cardamom, or omit the allspice. I think the cinnamon is necessary, though, for a winter comfort breakfast.

You can serve the baked oatmeal cut into squares or wedges, or scoop it out with a spoon for a more rustic look. 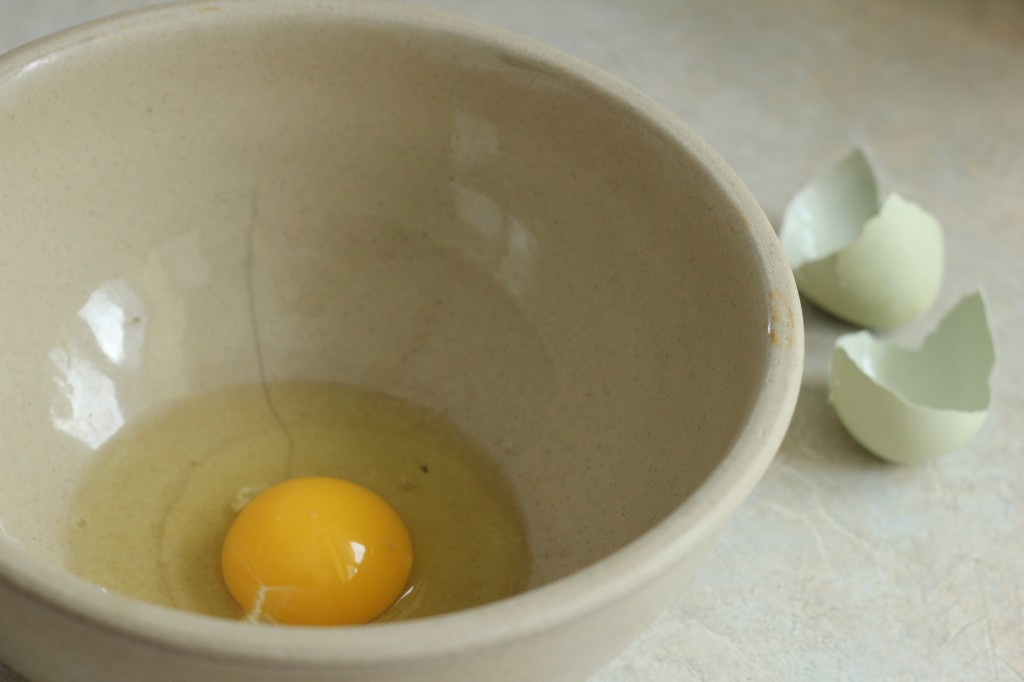 In a medium-sized bowl, beat the egg with a whisk or a wooden spoon, stir in the pumpkin (or mashed banana or applesauce), melted butter or oil, brown sugar, spices and salt.

Sprinkle the baking powder evenly over the top and stir it in.

Add the milk, stir to combine. 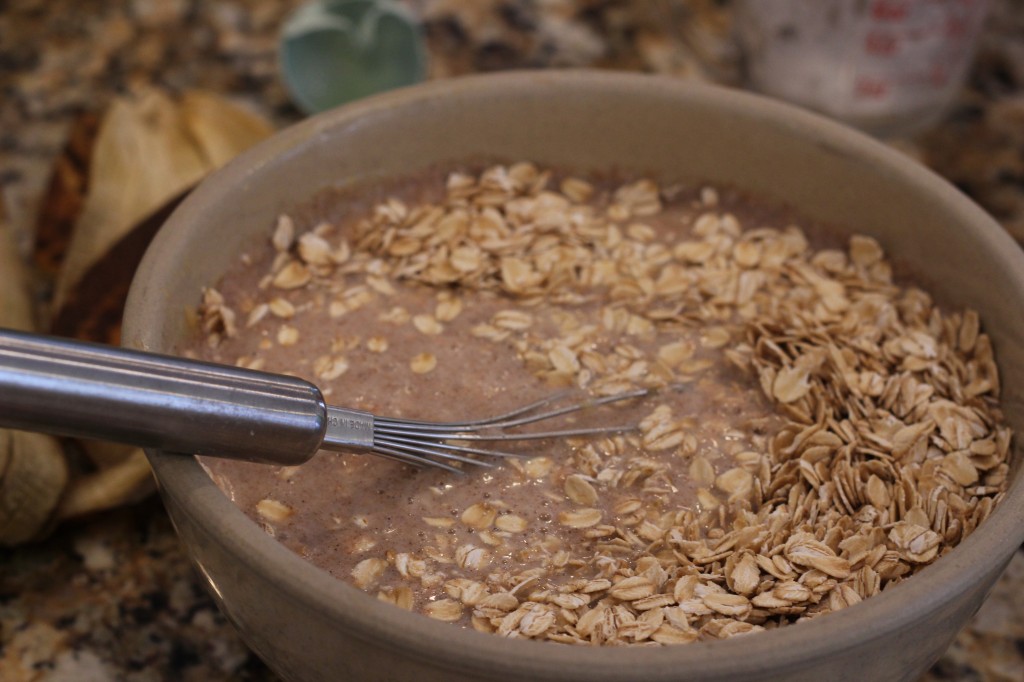 Add the rolled oats, stir to combine. Batter will be quite liquid.

Pour the batter into the prepared pan, and bake for 35 to 40 minutes, until the center is set. (Feels soft-firm to the touch, no longer liquid.)

Serve immediately with a drizzle of maple syrup, a splosh of cream or milk, or whipped cream, or if you want to be decadent - a scoop of ice cream. You could top it with applesauce, or a swirl of chocolate sauce, or chopped nuts, or dried fruit, or fresh fruit, or yogurt, or a spoonful of jam or marmalade.

Or just eat it plain. Mmmmm. 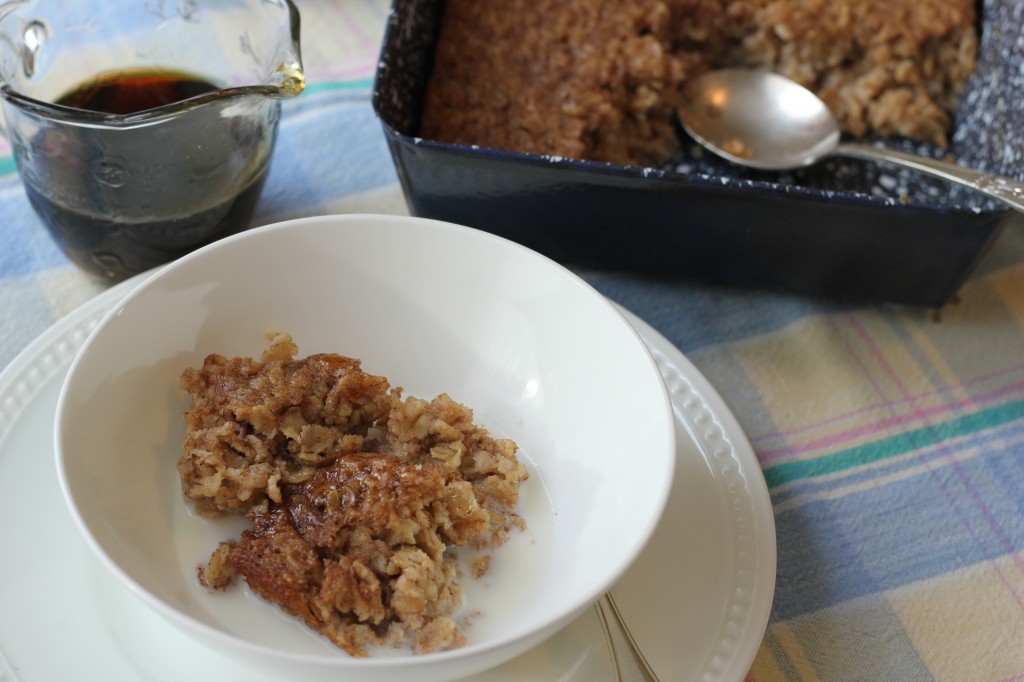 Serves 5 to 6. Baked oatmeal will keep, covered, in the fridge for up to five days. Portions can be reheated as needed. You can also freeze individual portions, well wrapped to take out on busy mornings and quickly reheat in the microwave or toaster oven (or regular oven).

Mangoes and Blueberries in Yogurt Cream