If you've got a chocolate craving or a brownie urge that needs to be filled right now, then you've come to the right place. Wickedly simple and wonderfully satisfying, this brownie in a mug comes together in seconds and cooks in a minute, to have you  in chocolate heaven before you can say Willy Wonka's Whiskers. (Skip to recipe.) 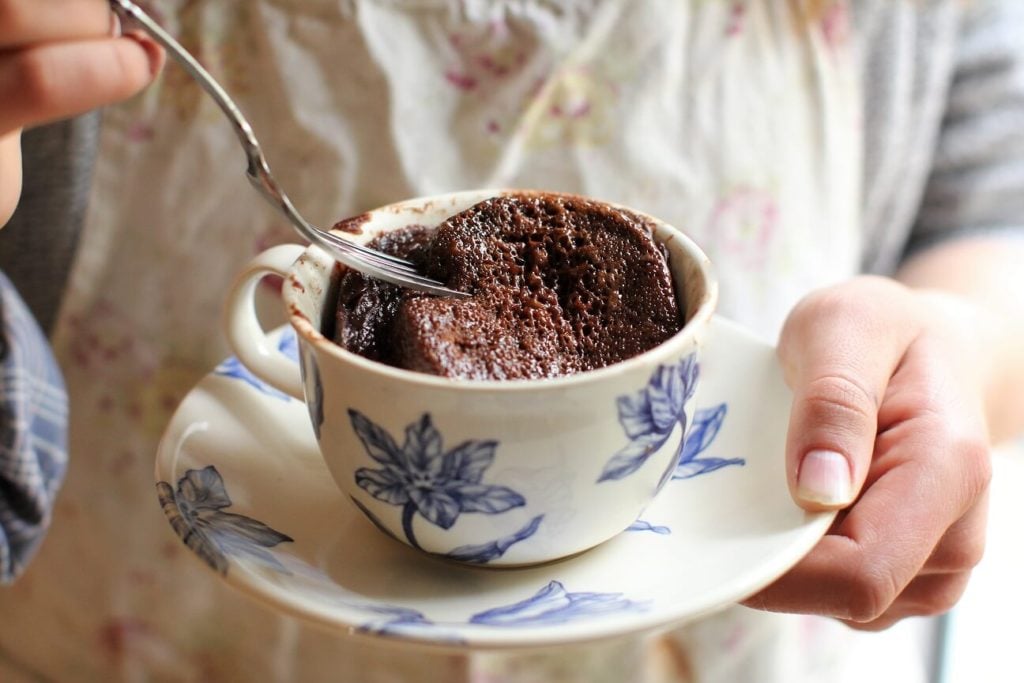 Chocolate magic. That's what this brownie in a mug is. Pure magic.

I mean, how else could one egg and a blob of Nutella be turned into something this scrumptious and moist and decadently chocolatey? There's got to be some wizardry  involved.

I don't understand it, but I sure can enjoy it!

And you can, too - in less than two minutes you can have a spoonful of these delectable brownies heading for your mouth. 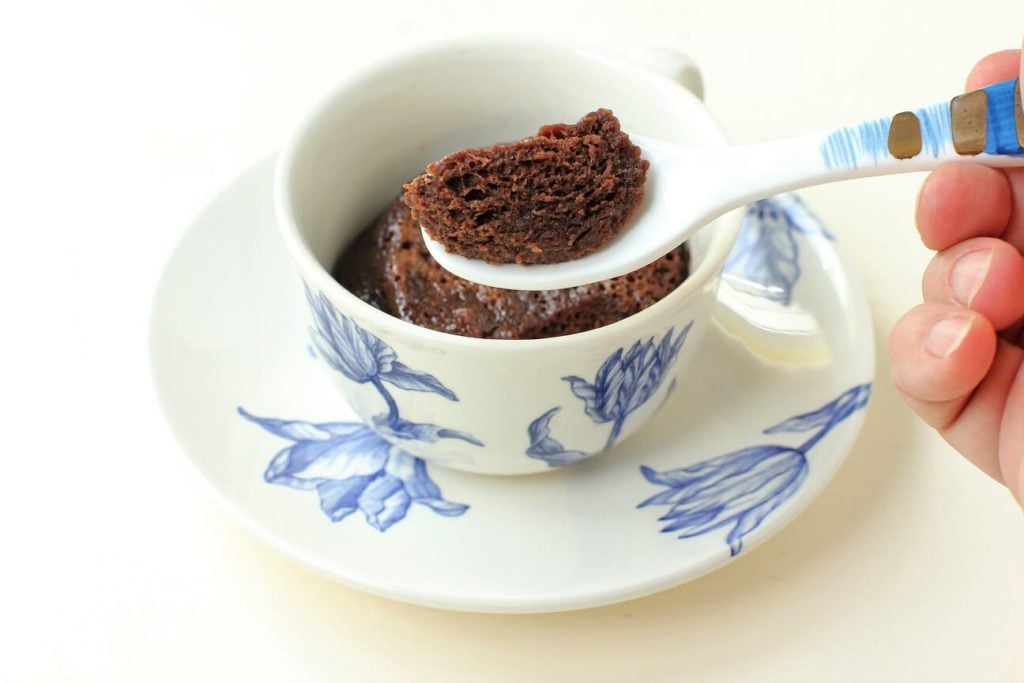 Kids can whip up these brownie in a mug morsels quickly with minimal effort. Adults can, too. (I speak from experience - in the name of research, of course 😉 ).

Beat the egg, add the Nutella, then pour that glossy, chocolatey deliciousness into a mug and pop it into the microwave. 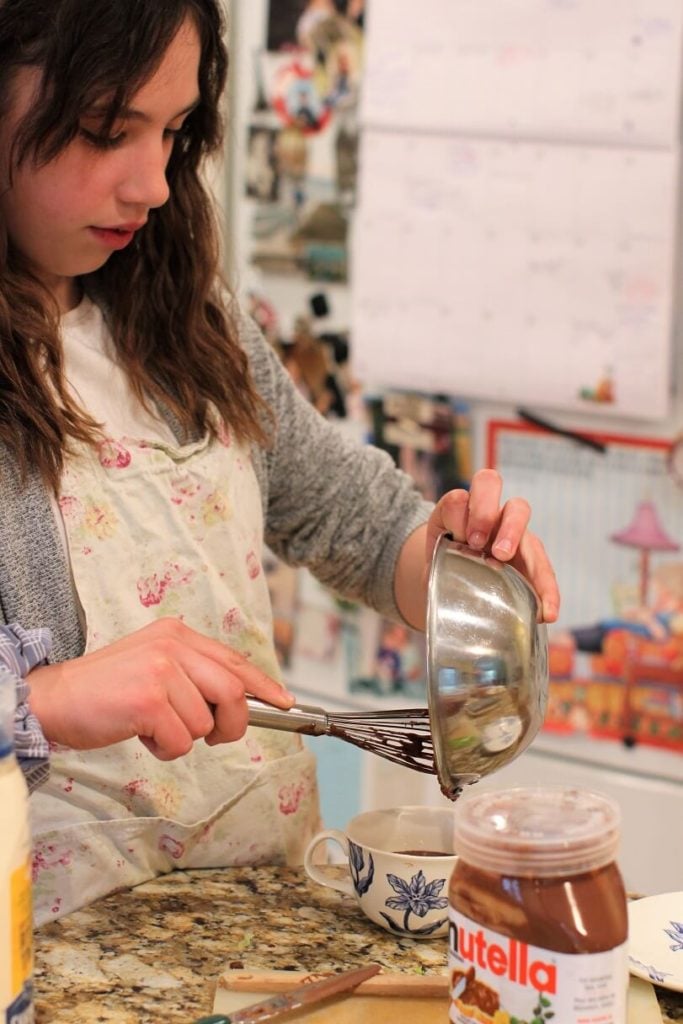 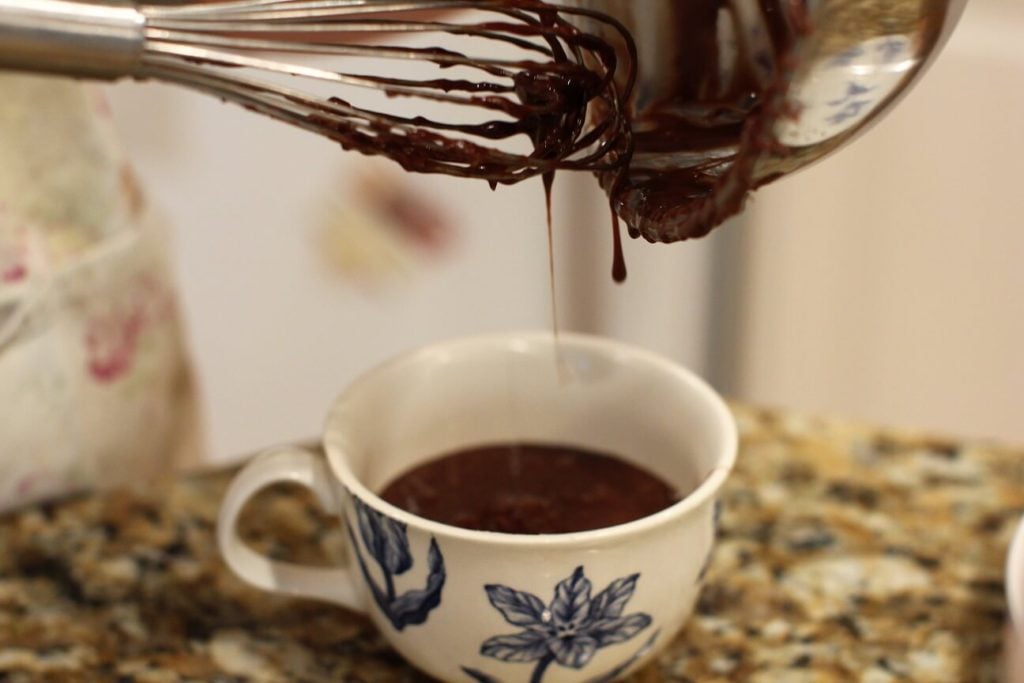 And you're ready to dig in! 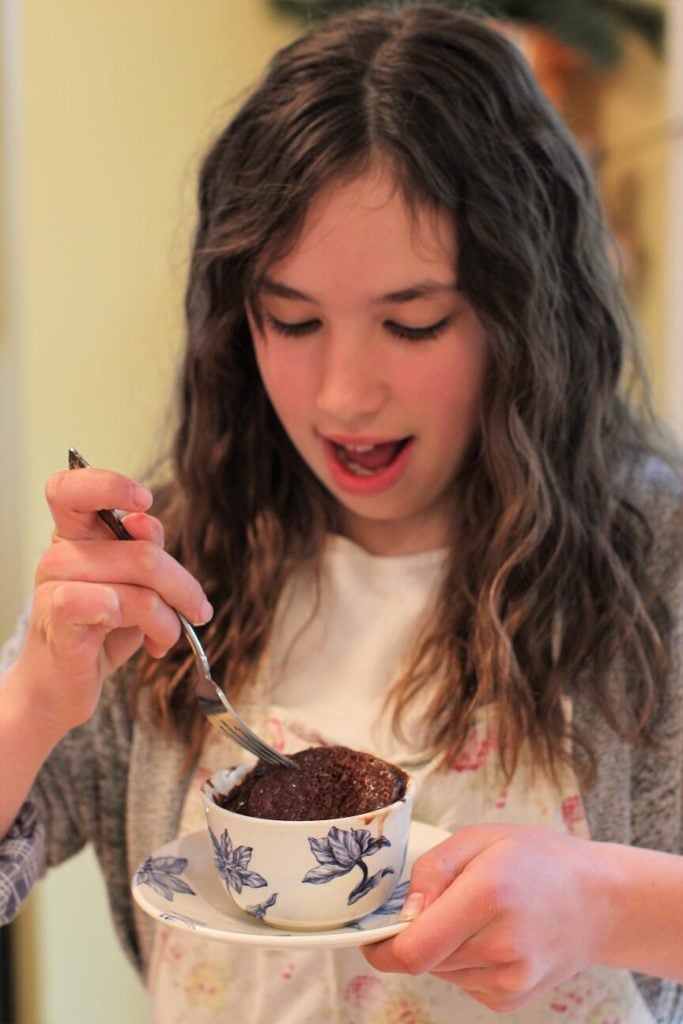 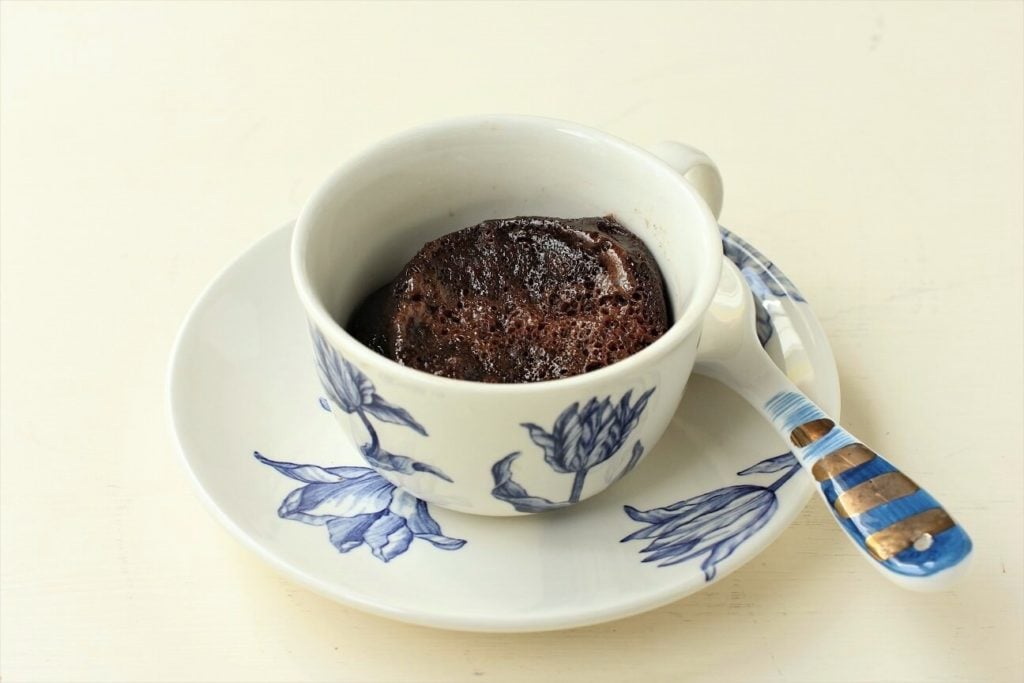 The idea for these brownies came from Nigella Lawson's Nutella Brownies (4 extra large eggs, pinch salt, 1 cup Nutella, 8 inch pan, 17-20 minutes, 350°F oven) in Simply Nigella Feel Good Food. Meredith and I experimented to get the right ratio of egg to Nutella in our mug brownies. (All that experimenting was exquisitely delicious, I must admit, as I lick my lips.) We've done you a favour, because now you won't have a whole pan of brownies staring at you and tempting you to eat them up. You can satisfy yourself with a cup, a spoon, and one perfect brownie.

Kitchen Frau Notes: The only thing you need to make sure is that your mug is big enough. You can measure by pouring water into it before using it - as long as 1 cup (240ml) of water fits into it, your brownie will work in it. Also, make sure there isn't any metallic paint on your mug or it will spark when it is cooking in the microwave.

This recipe was developed using a large egg - if your egg is larger or smaller,  use a bit more or less Nutella accordingly.

Each time you make the Brownie in a Mug, it will be a slightly different shape - sometimes it wedges itself at an angle up the side of your mug, like Meredith's did in the photos above, and sometimes it stays more level in the mug, like the one below. 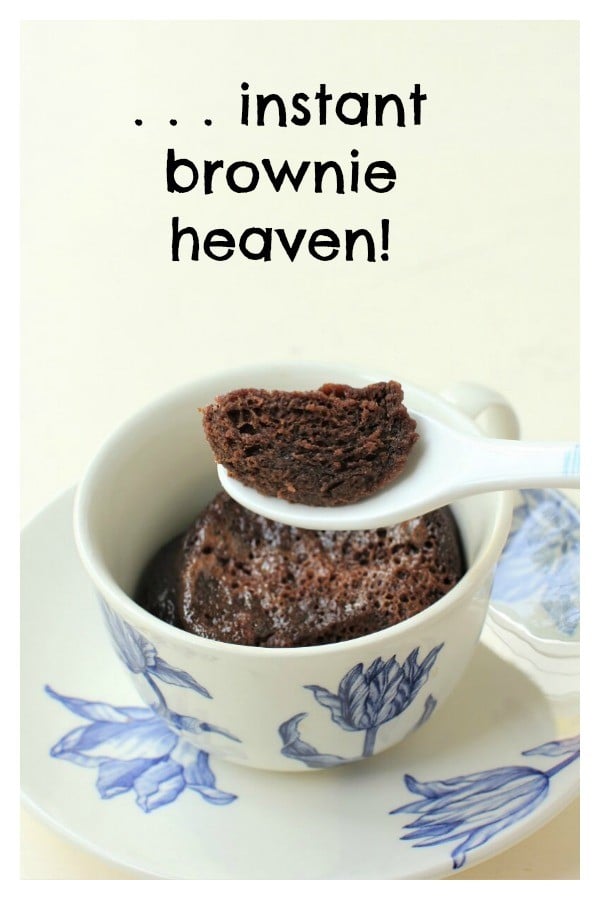 2-Ingredient Brownie in a Mug

In a small bowl, beat the egg with a whisk or fork until it is blended. Add the Nutella and beat some more until it is smooth and glossy.

Choose a mug that can hold at least 8 ounces/1 cup (240mls) of liquid. Grease the inside of the mug with butter, oil, or cooking oil spray. Scrape the brownie batter into the mug, using a spatula to get the last bits out of the bowl.

Microwave on high for one minute. The brownie batter will rise up to about 3 times its height while it's cooking, then sink down again as it cools.

Allow the brownie to cool for several minutes, then dig in with a spoon and enjoy!

Serves 2 (or one person with a big chocolate craving). 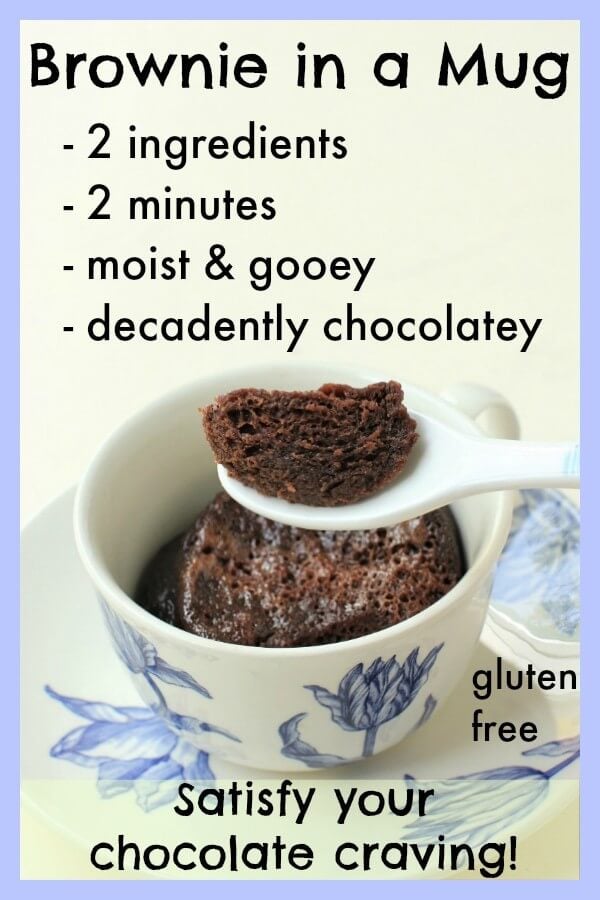 « Noum Kong (Traditional Cambodian Donuts): A Taste of Cambodia
Mushrooms on Toast - a Simple Pleasure (and we've planted the garden!) »