What's crisp and crackly and sweet and chocolatey? Ta-da-da-da! Brownie Brittle! Put a few chunks of it into your lunchbox to help satisfy your sweets cravings, and you won't even feel too bad about it - especially with the delicious and healthy addition of a special ingredient. (Skip to recipe.)

We're finished our second week of school but we're still in that thrilling 'start of the year' stage.

There is so much possibility stamped into the labels on those pristine new notebooks and shiny new pencils. There is the promise of new adventures and the anticipation of new friendships, and secrets, and dramas. 'Getting ready' for school was always the reward that made up for the sad fact that the summer holidays were almost over. It was the heady distraction during all my grade school years.

When I went to university, the beginning of September elicited a whole new level of excitement. Each summer I came home to the farm to work at my summer job in an agricultural research station. It was a great job, but when the four months of work were over, it was time to head off to university in the big city of Edmonton again; time to move back into the excitement of life in the students' residence and apartments. A new school year, new classes, new books, old friends, new roommates and all the fun of setting up in my new lodgings again - those were heady times. 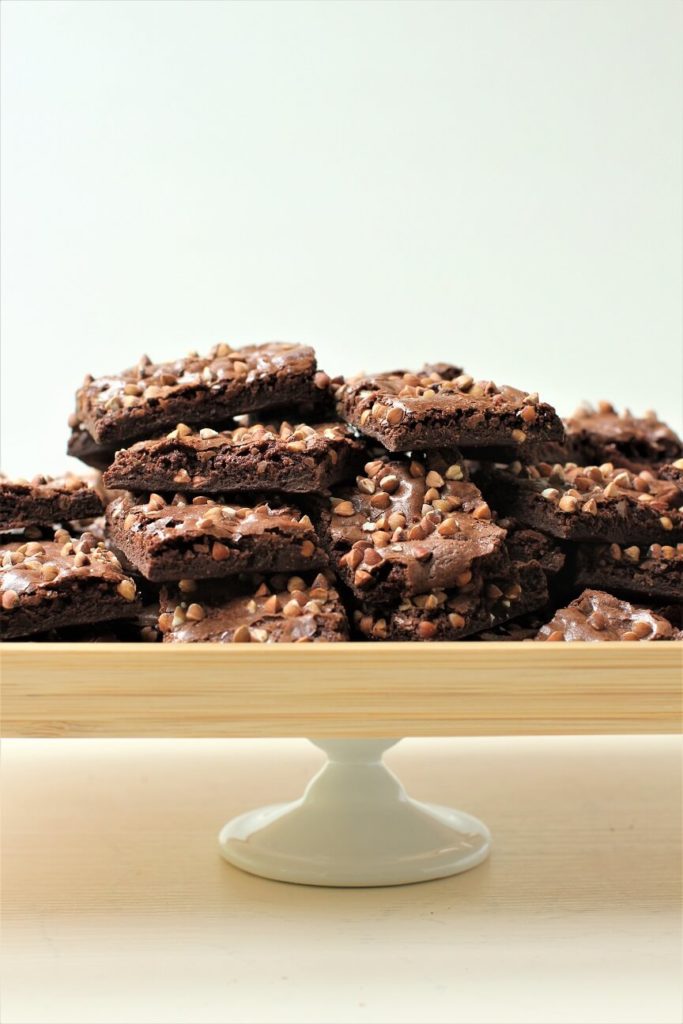 Becoming a teacher was my destiny. Not only did I love the actual work and reward of it, but hey - it was the best kind of life to keep feeding my thrill of new September beginnings. The school year flows to a definite rhythm, starting with that all-encompassing high at the end of the summer, when school supplies start appearing in stores. After having a family and staying home to raise the kids, I missed that autumn thrill for the first few years (but I was knee-deep in diapers, so didn't have time to lament the fact). It wasn't long before the kids started off to school, and I got swept back into the yearly wave of September thrills; buying school supplies, labeling pencils, packing lunches. Oh, I was in heaven. 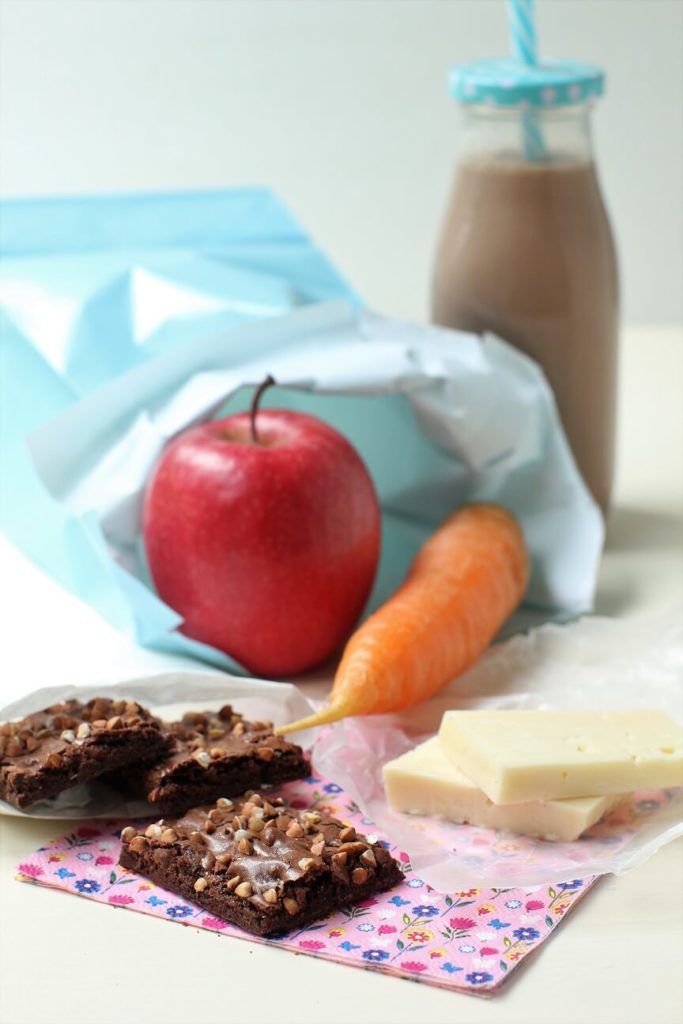 Then I started teaching again, and the September thrills have kept on coming. This year I've had not only the start-up of my German School Kindergarten class but I'm teaching full-time in a regular grade one class for the first few weeks of the school year. I love seeing the excitement on the students' faces as they come into school on that first day with their brand new lunch kits and backpacks. I love watching them as they greet old and new friends and marvel at the wonders in their new classroom. I love their big smiles and shy smiles and excited hugs. I love seeing the ones that blossom and open up after starting the day out anxious and clinging to parents' legs.

And I still love packing bag lunches at this time of year (that thrill only lasts until about October, though). 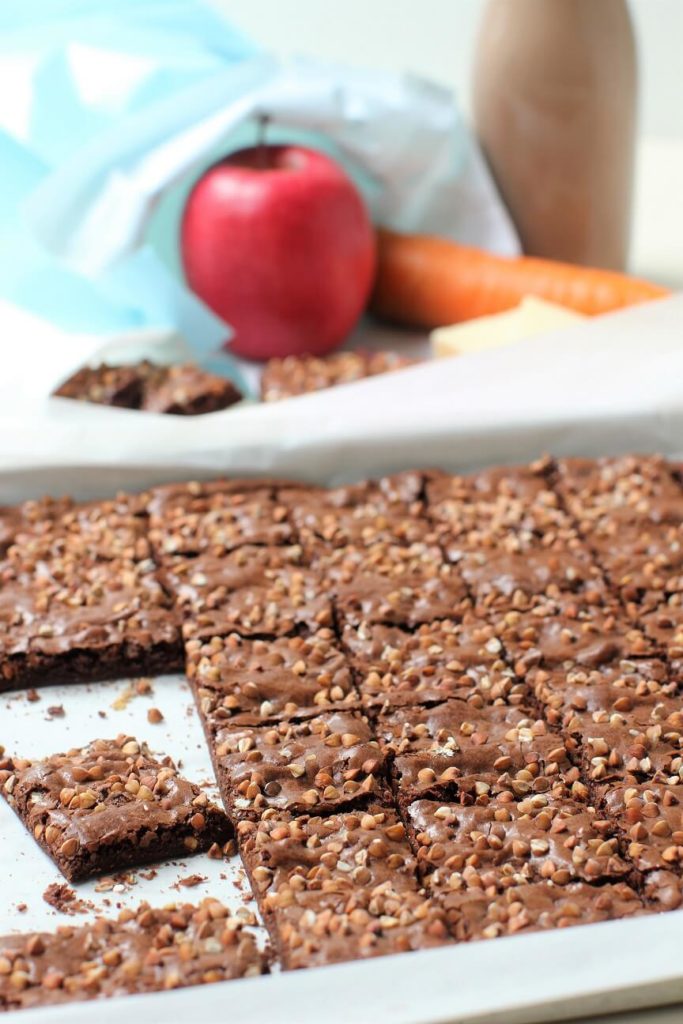 This easy Buckwheat Brownie Brittle is a wonderful lunch bag treat. It also disappears pretty fast if you keep a plate of it on the counter. Crispy, chewy little scraps of brownies are intensely chocolaty to satisfy any cravings. They're nut free and gluten free so you can send them to school without any worries. I've brought containers of them to potlucks and they've been a complete hit - the container always comes home with nothing but a few crumbs in it. They're delicious alternative to overly-sweet, packaged cookie bars. 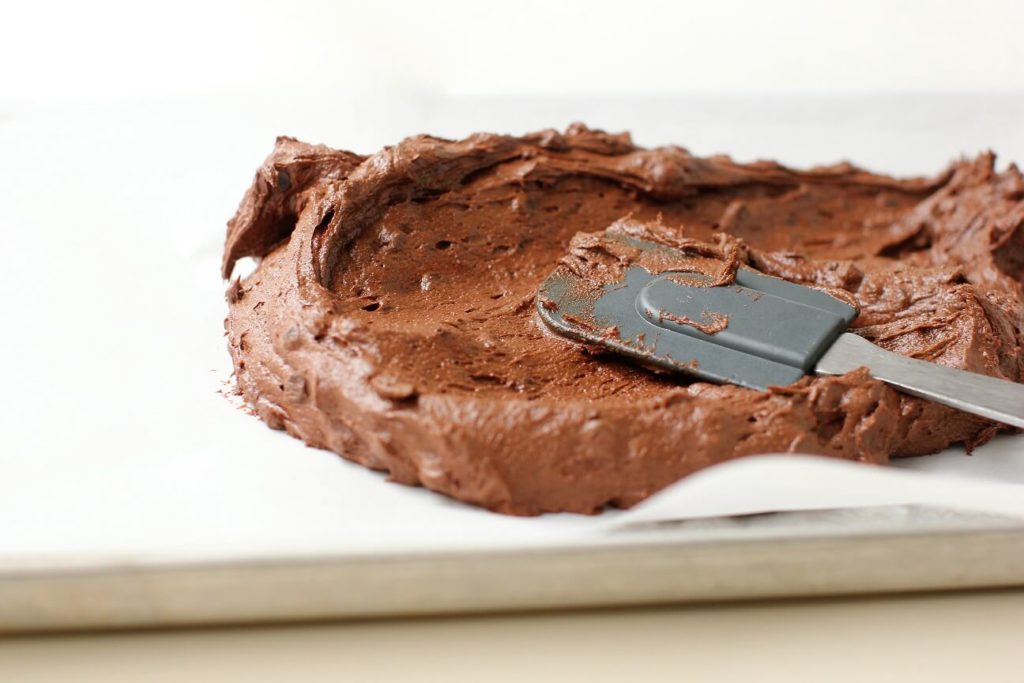 The rich chocolate batter is made with high-fiber buckwheat flour and a triple source of chocolate: melted chocolate, cocoa powder, and chocolate chips. To guild the buckwheat lily, the top of the brittle is strewn with crunchy buckwheat groats, either raw or toasted (the toasted ones are called kasha). These delectable little bites have the unique ability to stay both crunchy and chewy in the center, even when left on the counter, uncovered, for days; I think it's because of the buckwheat flour, but it's hard to do the experiment for longer than a few days, as the test subject keeps disappearing.

Kitchen Frau Notes: I have only made this brownie brittle with buckwheat flour; you should be able to replace it with regular wheat flour if you don't need it to be gluten free, but I don't know how it'll turn out. If you do make it with regular flour, let me know in the comments below so that other readers who wish to, can try it, too.

Melt the butter and chocolate chips or chopped chocolate together in the microwave (45 seconds at high power, then remove and stir to melt the remaining chunks) or in a heatproof bowl set over a small pot of simmering water. Set aside to cool for 5 to 10 minutes.

Line a large, rimmed cookie sheet (10.5 x 15.5 inches/27 x 39 cm or larger) with parchment paper - very important, or the brownie brittle is hard to get out of the pan. Use a piece of parchment that is bigger than the pan so it sticks up a bit on each side. Fold and press the paper into the corners so it stays in place. The size of the cookie sheet can be larger since you'll just spread the batter around and it may not fill the sheet completely.

In the bowl of an electric mixer, beat the egg with the sugar until it is white, creamy, and fluffy. Add the water, vanilla, instant coffee, and salt, and beat until they are smoothly incorporated.

Gradually pour in the melted chocolate and butter while the mixer is beating, scraping all the chocolate in with a spatula.

Add the buckwheat flour and cocoa powder. Beat well until you have a smooth batter. Stir in the mini chocolate chips.

Scrape the batter onto the paper-lined cookie sheet, spreading it with a spatula or spoon so that it is ¼ inch (.6cm) deep and relatively even - it doesn't have to go right to the edges of the pan. This is the trickiest bit of this recipe. You may have to hold on to the paper as you spread it, to keep it from moving around. Sprinkle the top of the batter with the buckwheat groats.

Remove the cookie sheet from the oven and score the brownie brittle with a knife or pizza cutter into approximately 1½ (4cm) squares, cutting almost all the way through, but not quite. Allow to cool, then lift the whole slab of brownie brittle with the parchment paper onto a cutting board and cut or break the brittle along the score lines into squares. Store in an airtight container at room temperature for up to several weeks (I guarantee it won't last that long). 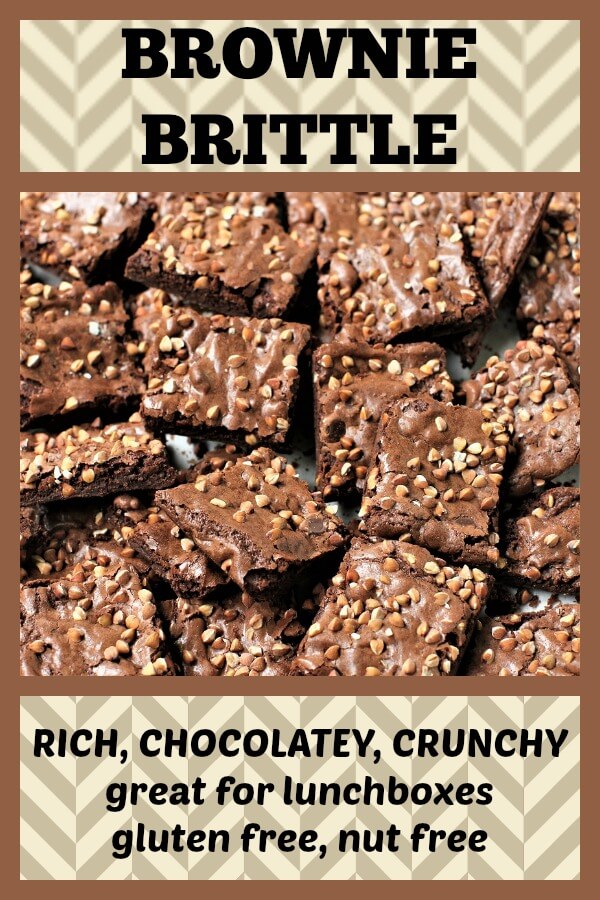