The unusual and exotic addition of vanilla to this rice pilaf adds a subtle complexity that takes it from ordinary to sensational. Sweet golden raisins and toasted almonds make it fancy enough to star as a side dish at any dinner party. (Skip to recipe.) 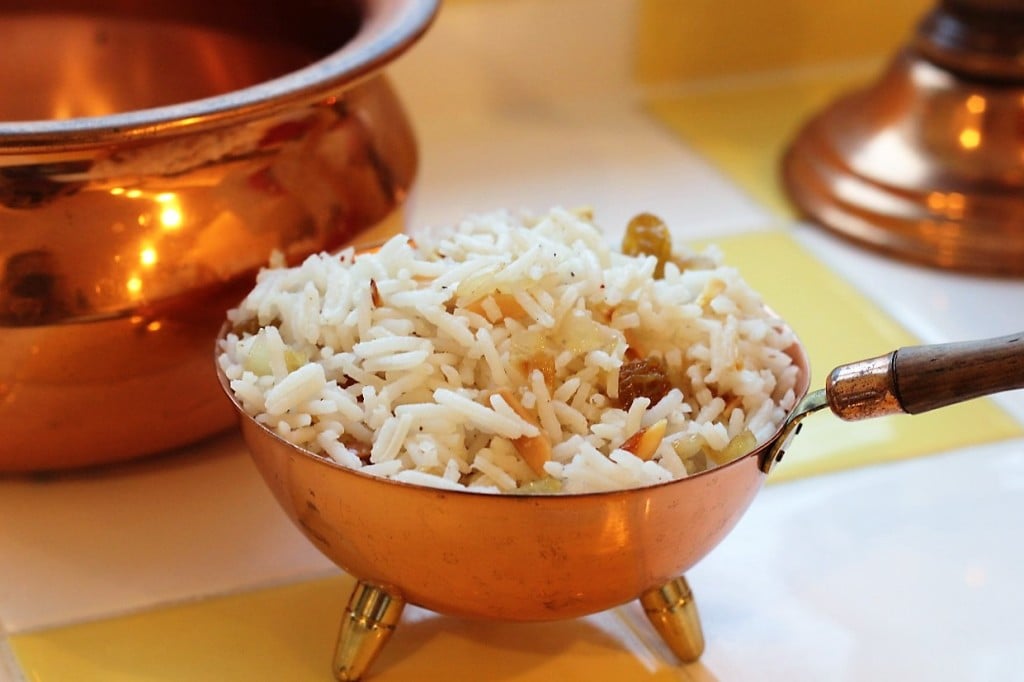 Looking for an elegant side dish for entertaining? This one is a hit.

Light, sophisticated . . . the perfect partner to chicken, fish, or any main dish, really. Its subtle but surprising flavour comes from the vanilla, which melds so smoothly with the sweetness of the golden raisins and caramelized onions and the slight saltiness of the rice. Basmati is the rice of choice here - its long elegant grains keep their shape and stay tidily separate. The toasted almonds add an appealing nutty, crunchy counterpoint to the chewiness of the raisins. This is truly a dish where the whole is so much more than the sum of all its parts.

I had been working on developing a savoury recipe for a contest featuring vanilla, and the chicken dish I came up with was okay (needs some tweaking), but this recipe that I fiddled with to go along with it . . . an absolute winner in our household. There's something about the vanilla in it . . . hard to describe.

I've made it several times since, and it will definitely be on my menu for special meals or just to make ordinary meals seem special - though I loved the leftovers heated up and eaten in a bowl for breakfast. Grain, nuts, raisins - almost like a fancy porridge, right?

Kitchen Frau Notes: Adding the salt after cooking the rice keeps it on the outside of the grains, to give a salty-sweet flavour punch to the rice along with the raisins.

You could make the onion-nut-raisin mixture several hours ahead of time, let sit in the skillet, and reheat it just before serving time. 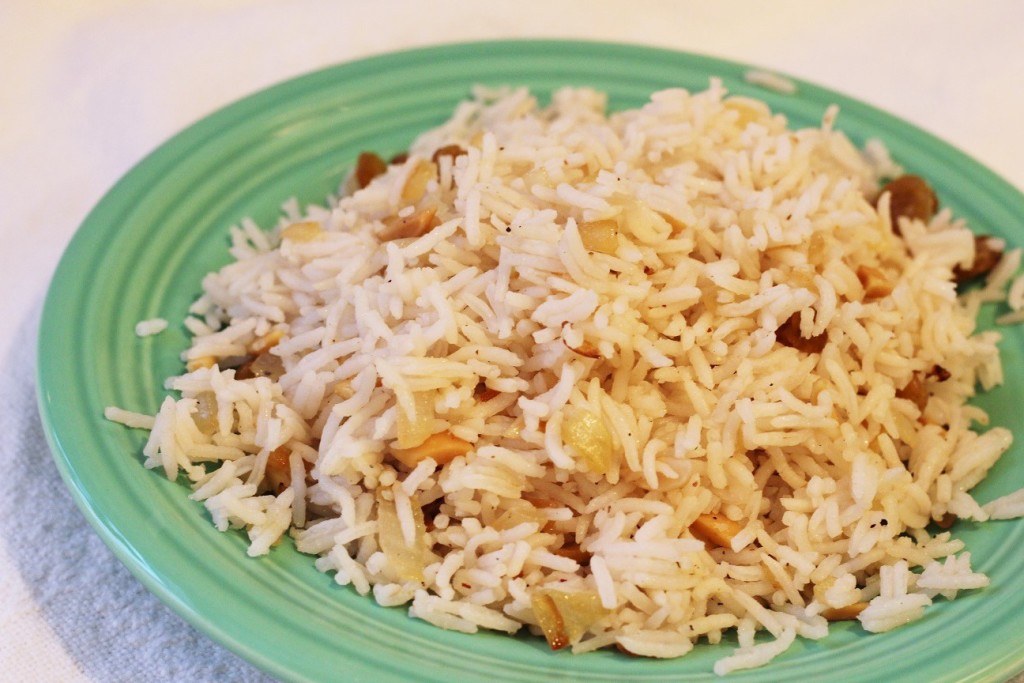 Rinse the rice in a strainer under running water until the water runs clear. (Catch the water in the saucepan and swish the strainer full of rice around in the water, then drain. 3 times usually does it.) This removes the starch off the outside of the rice and keeps the grains from clumping together. 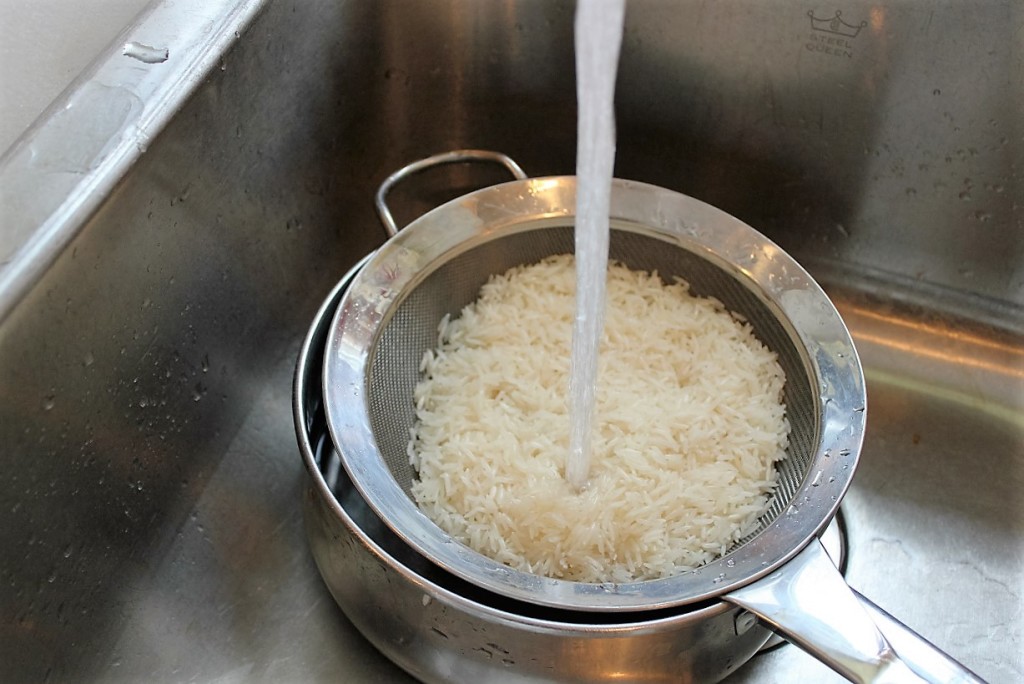 Drain well, then put the rice in a saucepan with the water and vanilla and bring to a boil over high heat, uncovered, stirring several times. Reduce the heat to low, cover the saucepan, and simmer the rice without peeking, for 20 minutes.

While the rice is cooking, toast the slivered almonds in a single layer in a baking pan in the preheated oven for 10 minutes, or until they are fragrant and golden. This really brings out their flavour. Remove from the oven.

In a small skillet, heat the butter until it starts to turn light brown. Add the chopped onion and saute until the onion turns golden brown, with some of the edges turning medium brown. This caramelizes the natural sugars in the onion. 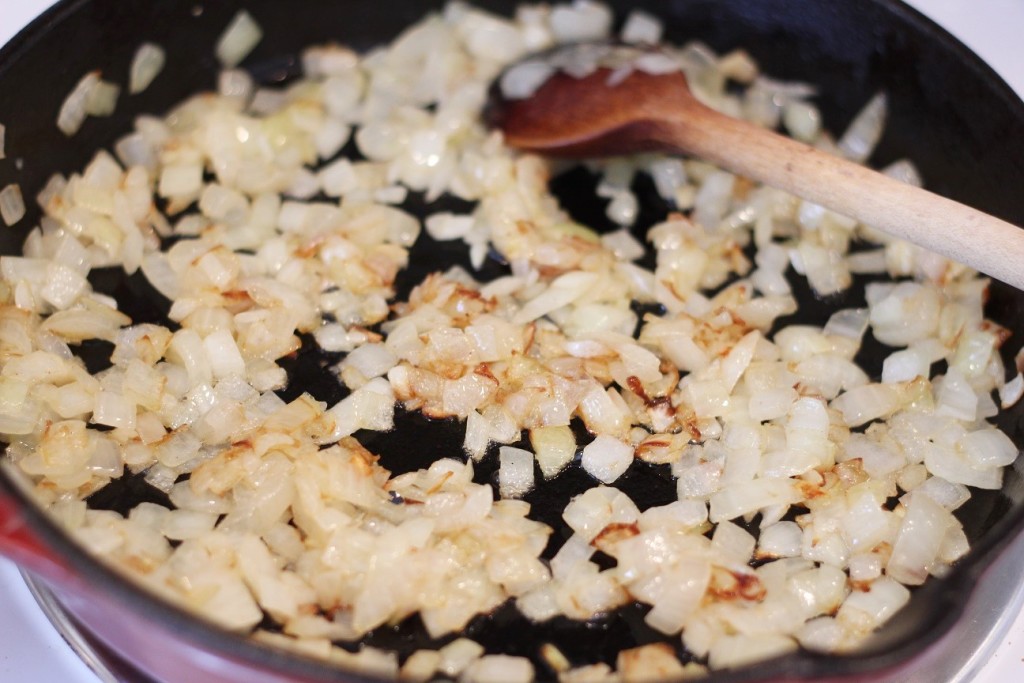 Add the raisins and toasted almonds to the onions. Turn off the heat and let sit in the skillet until the rice is cooked. When the rice is finished, reheat the onion mixture just until warm. 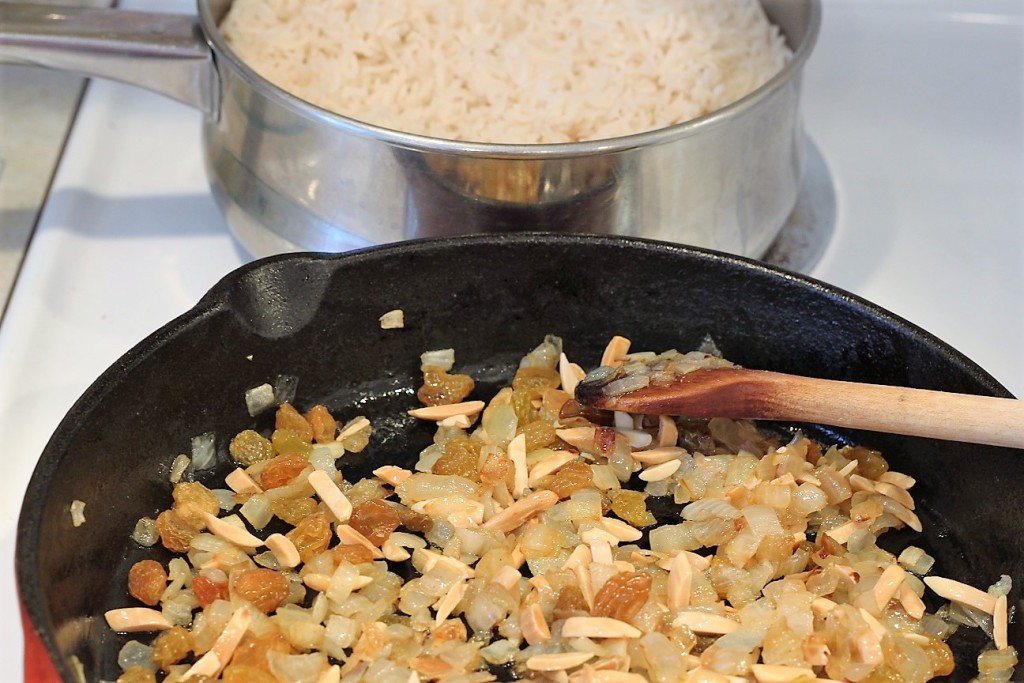 Turn the rice into a large bowl and add the onion-nut-raisin mixture, scraping in every last bit of flavourful browned butter with a spatula.

Sprinkle the salt and and a good grinding of pepper on top, and toss it all together well. 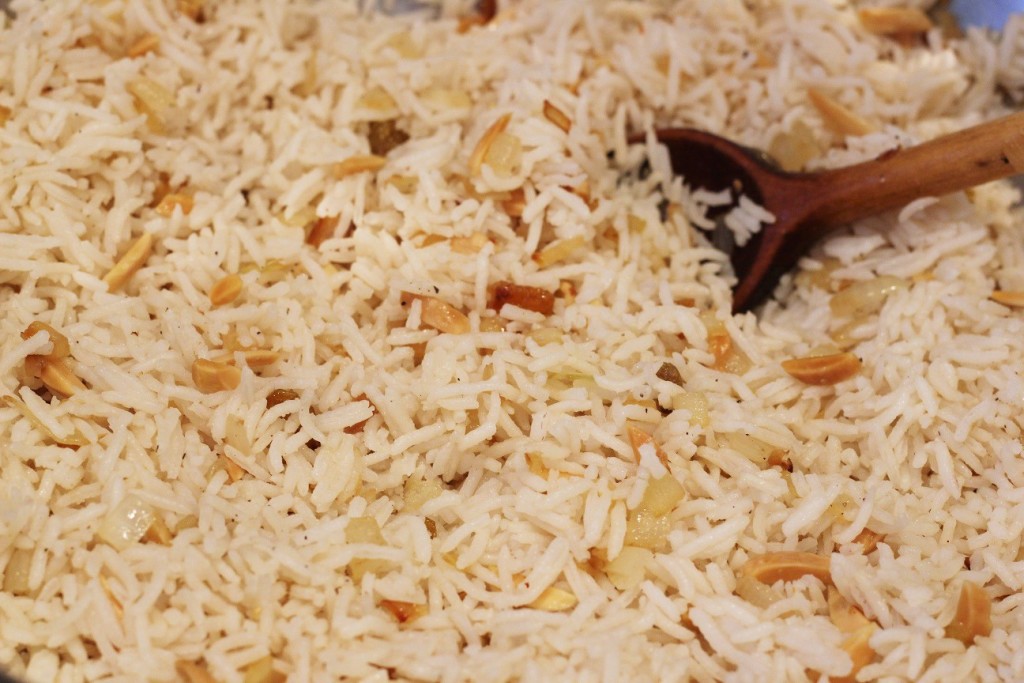 Some other delicious side dishes: