A rich and hearty venison stew is a delicious way to enjoy this lean and healthy meat. Cook it over the campfire for extra smoky flavour, or simmer it on the stove - either way you'll be smacking your lips. Serve the stew with a few cubes of sweet-sour pickled pumpkin for a zesty counterpart that makes it even more memorable. (Skip to recipes.) 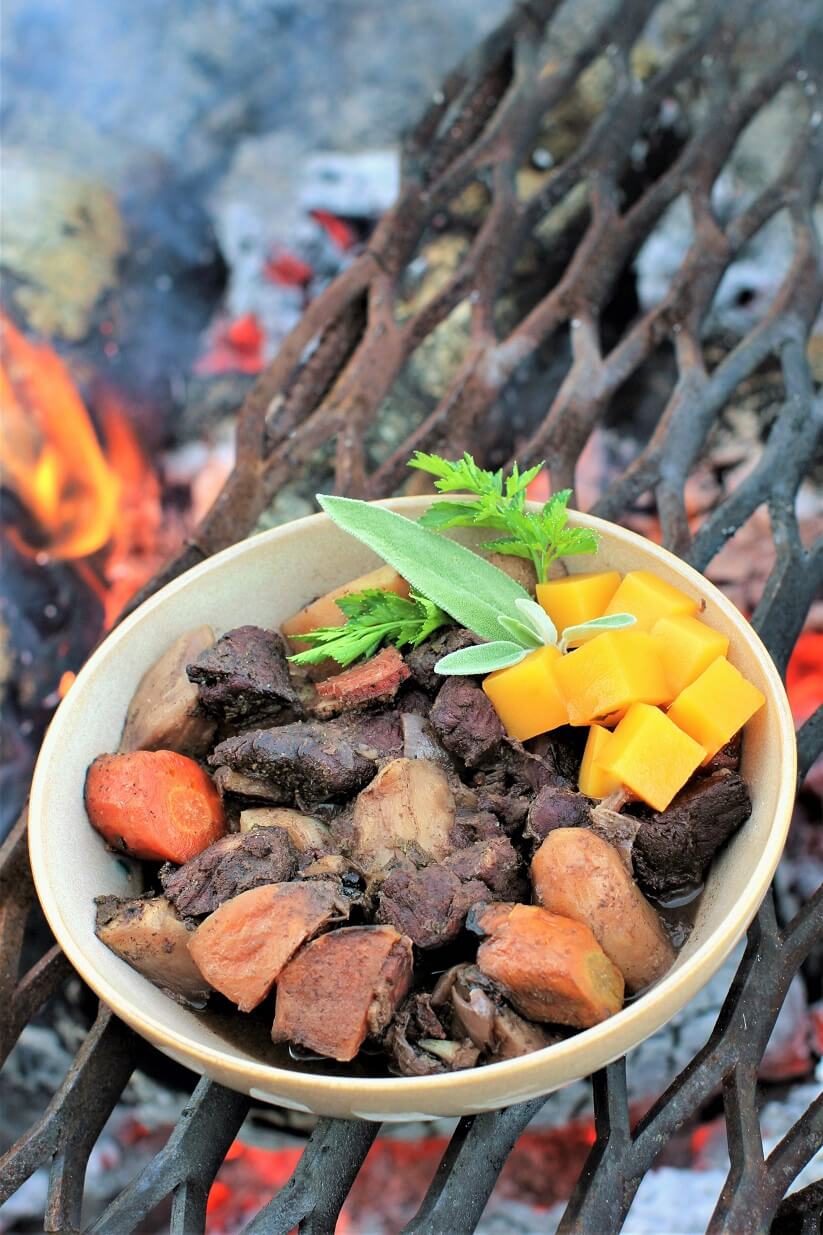 Winter has hit our little corner of the world with a vengeance. One day we were enjoying a lingering late fall, and the next we were shoveling mountains of the white stuff. No nice gentle slide into the season here!

A few weeks ago Sabina and I were cooking another Campfire Dinner on a glorious autumn day. 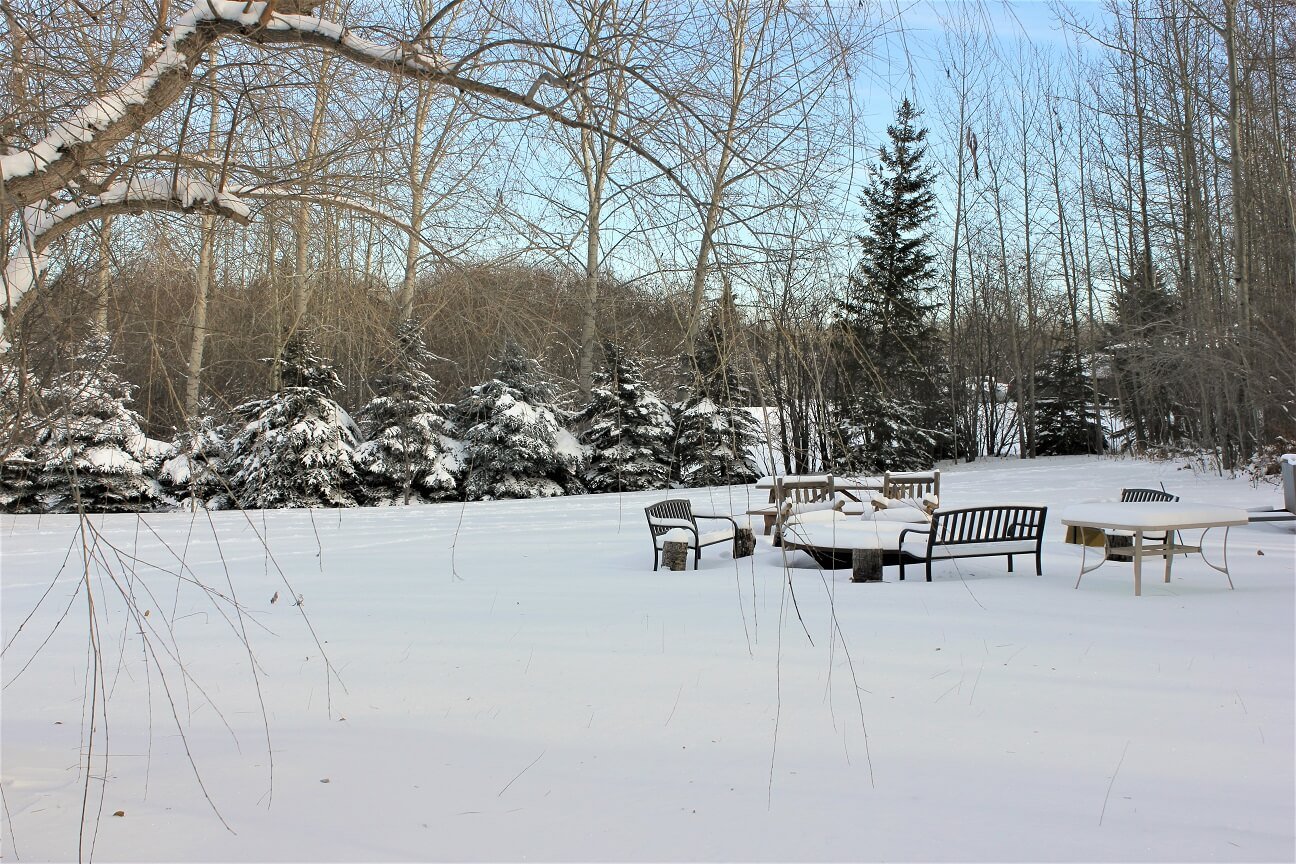 It may be a while before we can do another Campfire Cooking dinner! 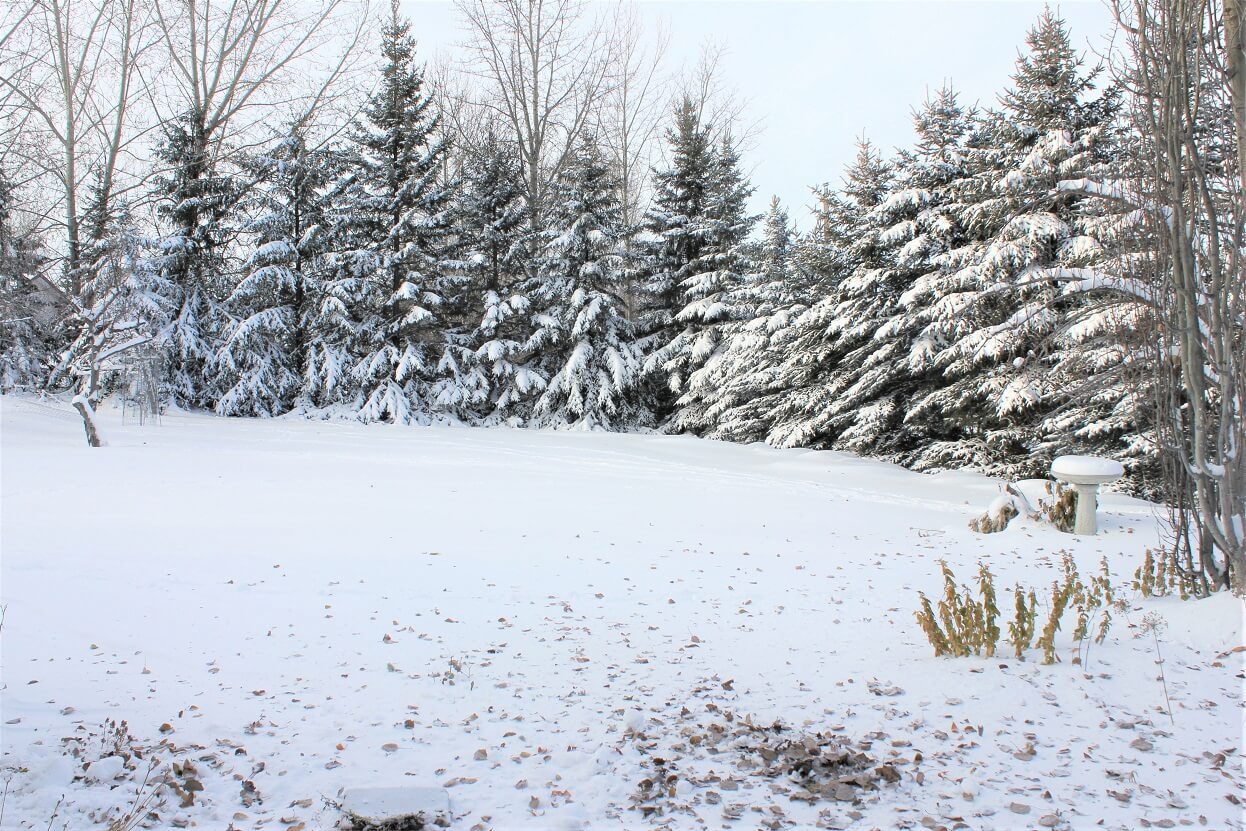 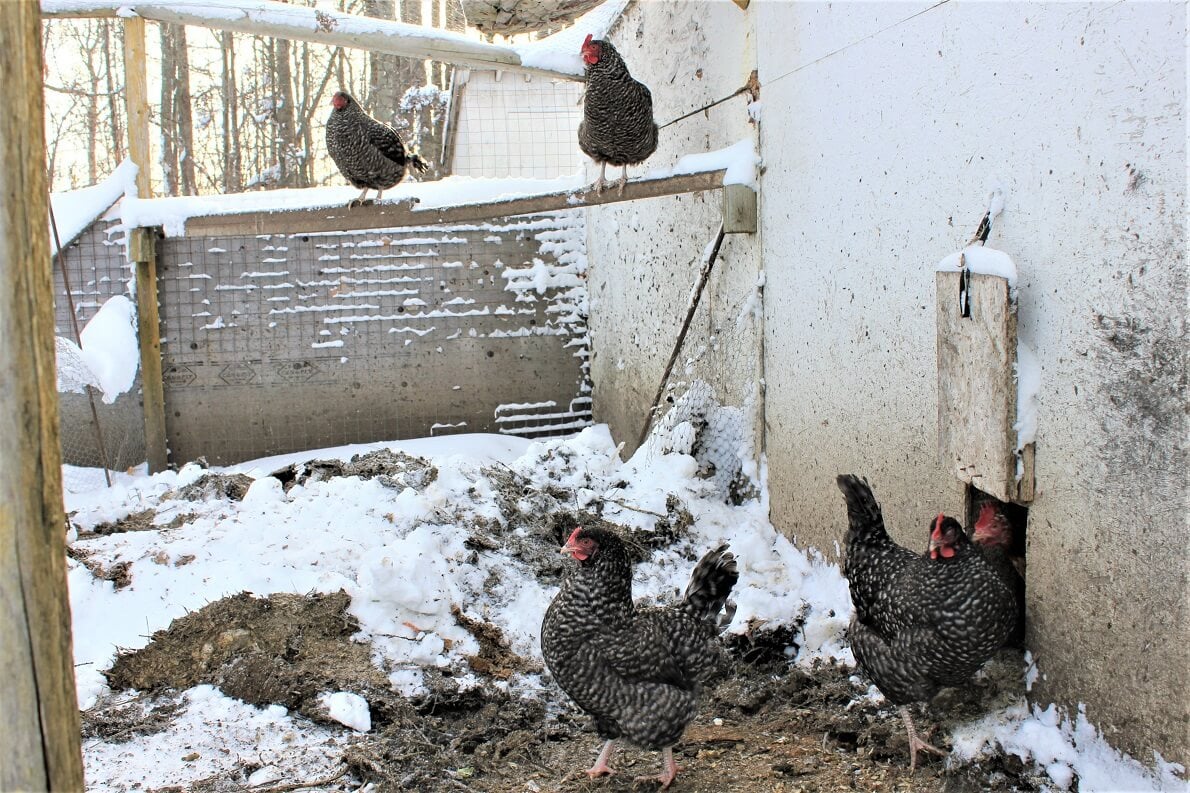 I'll console myself with looking at the photos of our last Campfire Cooking day.

Our October Campfire Cooking menu theme was 'Into the Wild' - a rich and hearty meal that personified autumn's bounty.

Campfire Cooking: 'Into the Wild' Menu

Sabina and I prepared a delicious menu that showcased a selection of fantastic wild and foraged foods.

First Course: Campfire Queso Fundido with fresh Focaccia Bread . . . An absolute winner! The four of us had to really restrain ourselves from gorging on this generous course so we weren't too full for the rest of the meal! We started off the preparations with Sabina baking a loaf of Mark Bittman's Skillet Focaccia with Grapes ('How to Grill Everything' p. 497) in a cast iron bread baker set right into the fire's embers. The bread was light and heavenly with a great springy texture and deliciously holey structure - a campfire success.

For the queso fundido, we based it loosely on this Mexican version (without adding the salsa). We used a big griddle set over the camfire and sautéed onions, wild honey mushrooms, and fiddlehead ferns (frozen from the summer) in a generous dollop of bear fat (supplied by my sister, Ingrid, an avid hunter and trapper). A handful of fresh garden herbs (parsley, chives, thyme, marjoram, and sage) provided bright flavour, and then we tossed in about 8 bulbs of chopped black garlic - wow! What a rich, umami flavour that added.

We topped the whole glorious mess with a mound of grated cheese (havarti, aged cheddar, and gruyère), which melted down amongst the smoky vegetables to form a blanket of deliciousness. A liberal grinding of fresh pepper, and we scooped it all up with that wonderful focaccia, still warm from the campfire.

Entrée: Smoky Venison Stew with Pickled Pumpkin . . . I had a beautiful venison sirloin roast from my sister in the freezer. It was so lean and tender, the meat so dark and rich. Five days before our campfire cookout, I cut the venison into chunks and marinated it with red wine and spices. By the time cooking day arrived, it was deeply flavoured and ready for the stew. We tossed the meat in a bit of bear fat and browned it on a grill rack over the flames, then simmered it in a big pot with the reserved marinade and some more red wine. 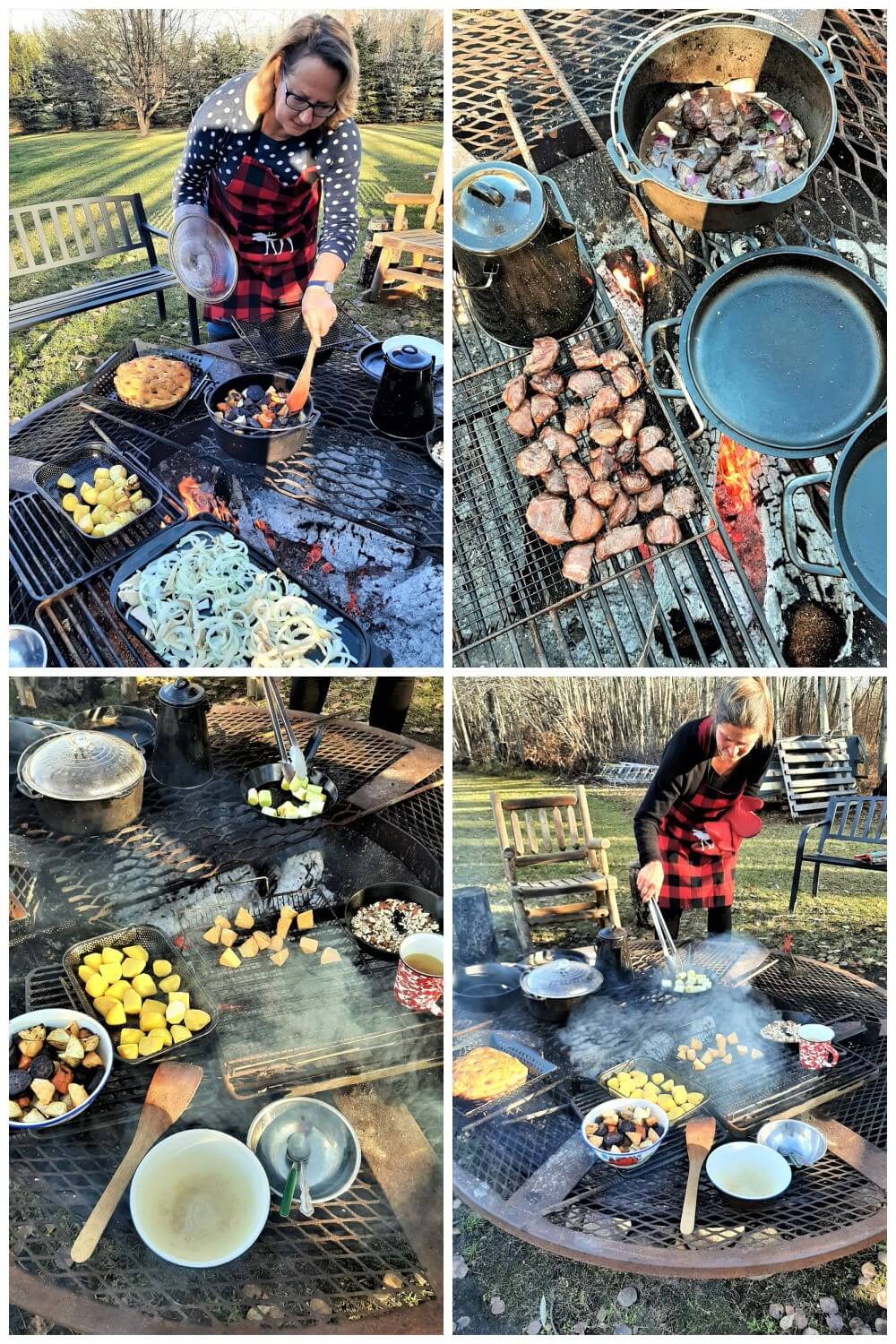 We grilled all the veggies separately (potatoes, celery root, orange and purple carrots, and leeks) to get the maximum smoky flavour into them (but you could skip this step and just add them to the pot without charring them first). Into the pot they went, along with some bacon, fresh sage, and enough water to cover. After a slow simmer over the campfire, that venison stew was rich and aromatic - the meat tender and the flavourful, vegetables and broth a rich explosion of hearty flavour.

The perfect counterpoint was the puckery tang of freshly pickled (that morning) butternut squash in the sweet-sour German style (see recipe below). A handful of those piquant spicy squash cubes finished off each bowl deliciously, brightening up the flavourful stew with punchy pizzazz. Lips were smacked constantly while we enjoyed our venison stew along with a glass of red wine.

Dessert: Grilled Pears with Hazelnuts and Chocolate Sauce . . .  Soft buttery pears peeled, splashed with a bit of hazelnut liqueur, and grilled over the flames to caramelized sweetness. Then covered with a rich chocolate ganache, a cloud of whipped cream, and a scattering of crunchy toasted hazelnuts. A truly luscious combination. It was getting too dark for photos by the time we sat around the fire and ate this decadent dessert, but that didn't change how delightful it tasted.

Afterwards we sat around the camfire warming our fingers cradling mugs of Hot Pear Toddies - my new favourite campfire drink!

How to Make a Hot Pear Toddy

Just pour a shot of Pear Williams (clear pear brandy) into a cup or mug. Add a small spoonful of butter and a small spoonful of honey. (We put a fresh thyme sprig into each mug, too.) A few chunks of fresh peeled pear might be nice here, too. Top up the mug with boiling water and stir. This makes an absolutely warm and comforting hot drink to sip on when the night is chilly and you need to be warmed from the inside out!

Kitchen Frau Notes: The meat and vegetables in this venison stew are grilled before adding to the stew, in order to intensify the smoky flavour of the stew. If you wish to simplify the stew, just brown the meat first, and add the vegetables without grilling them. Add the 2 tablespoons of lard or oil anyway, as venison meat is very lean, and the bit of extra fat adds richness and flavour to the broth of the stew.

This stew could be made with any other lean wild meat, such as moose, elk, bison, etc (or even beef). 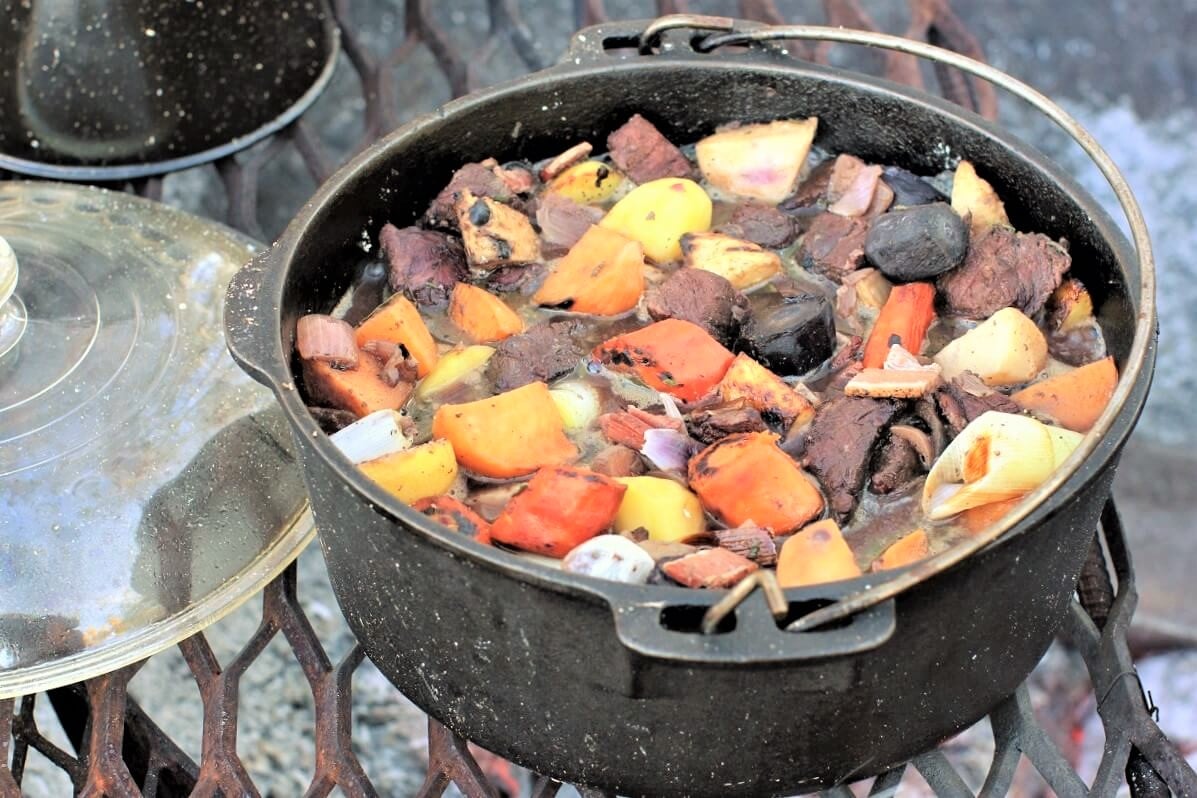 Trim any fat or sinew off the venison meat and cut it into 1½-inch (4cm) cubes. Put the meat into a bowl or heavy duty ziptop plastic bag. Crush the juniper berries by laying them on a cutting board and pressing down on them with the bottom of a glass. Crush the two garlic cloves this way, too. Add the crushed juniper berries, garlic, diced onion, and the the bay leaves to the stew meat. Pour over the red wine. Close the bag, squeezing out any excess air, or if using a bowl, push down all the meat under the liquid and cover the bowl with plastic food wrap or a lid. Leave the venison meat to marinate in the refrigerator for a minimum of 6 hours, or up to 5 days, turning it daily if leaving it longer than 6 hours.

Strain the meat and onions through a colander. Pick out all the meat cubes, return the onions and seasonings to the liquid marinade and  reserve it for later. Put the meat cubes on a plate and pat them dry with paper towel or a clean dish cloth.

Cut the bacon into 1-inch (2.5cm) pieces and fry it in a skillet until it is golden. Scoop out the bacon pieces and set them aside. Drizzle half of the bacon fat over the venison meat chunks and toss to coat the meat in a light film of bacon fat.

Cut the carrots, celery root, potato, rutabaga, and leeks into 1½-inch (4cm) chunks. Put all the cut vegetables into a large bowl and toss with the melted lard or ghee or oil.

Grill the venison meat on a grate set over a campfire, or on a barbecue grill, or brown the pieces in a heavy skillet or in an enameled cast iron Dutch oven on a stovetop. Grill or brown the meat pieces on all sides, then put them into a large stew pot or heavy Dutch oven. Pour over the reserved marinade with the onions and seasonings. Add the sage, salt, and pepper, and enough water to come up just to the top of the stew ingredients.

Set the pot onto a grate over the campfire, onto the barbecue grill, or onto a stovetop burner set to medium. Cover the pot and simmer the meat in the wine for 1½ to 2 hours, until it is tender.

While the venison meat is simmering, grill the cut vegetables the same way as the meat, just until they have some smoky char marks on them. They will only be partially cooked. Set them aside until the meat is tender.

Add the bacon, the remaining bacon fat, and the grilled vegetables to the meat. Top it up with more water to come up just under the top of the stew ingredients. Cover the pot again, and simmer the stew for 45 minutes to 1 hour, until the vegetables are tender. Add more water as needed if the stew gets too dry.

Serve the venison stew in large shallow bowls with the Sweet & Sour Pickled Pumpkin (recipe below) and plenty of crusty bread to sop up the flavourful juices. 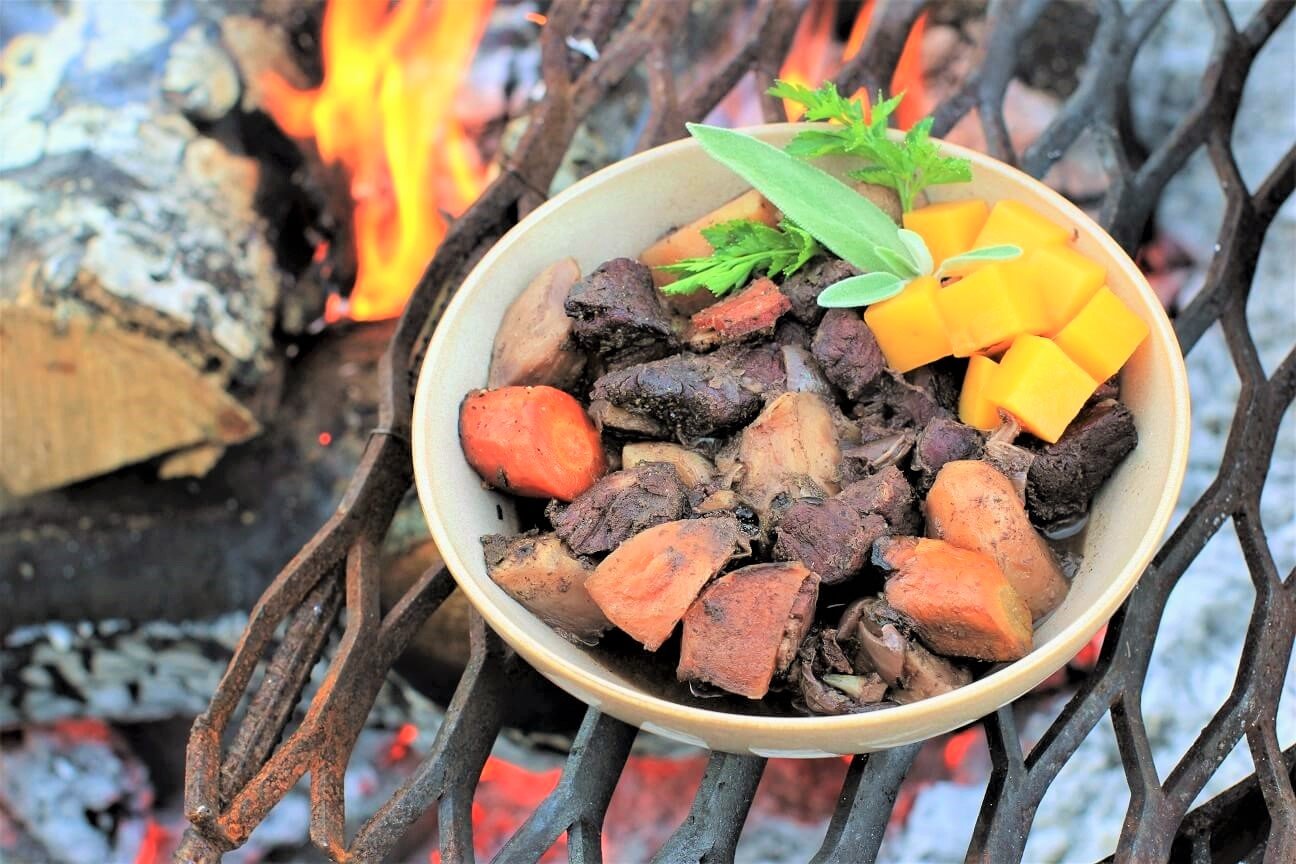 Tie up the pickling spice and peppercorns in a double square of cheesecloth with a piece of cotton kitchen twine or thread to make a little bundle.

Stir together the vinegar, water, honey, and salt in a large saucepan. Add the spice bundle, the cinnamon stick, and the cubed squash. Bring the liquid to a boil, then reduce the heat, cover, and simmer the squash for 30 minutes at low heat. Leave the squash to cool to lukewarm in the liquid, then transfer the squash and liquid to a jar or bowl, cover, and refrigerate for 4 to 5 hours or better yet, for a whole day or two before serving. Remove the cinnamon stick and spice bundle just before serving.

The pickled squash will keep, refrigerated, for 2 months or longer. 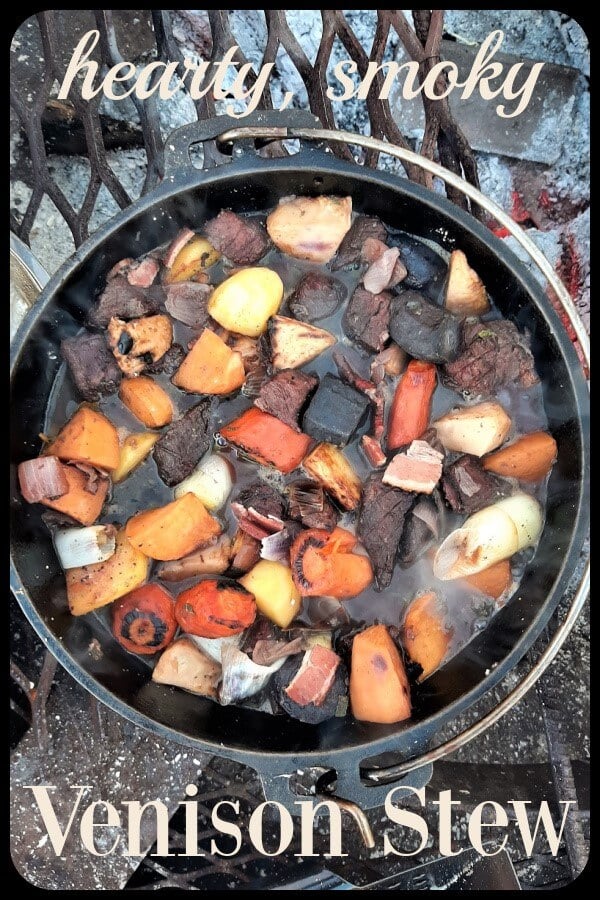 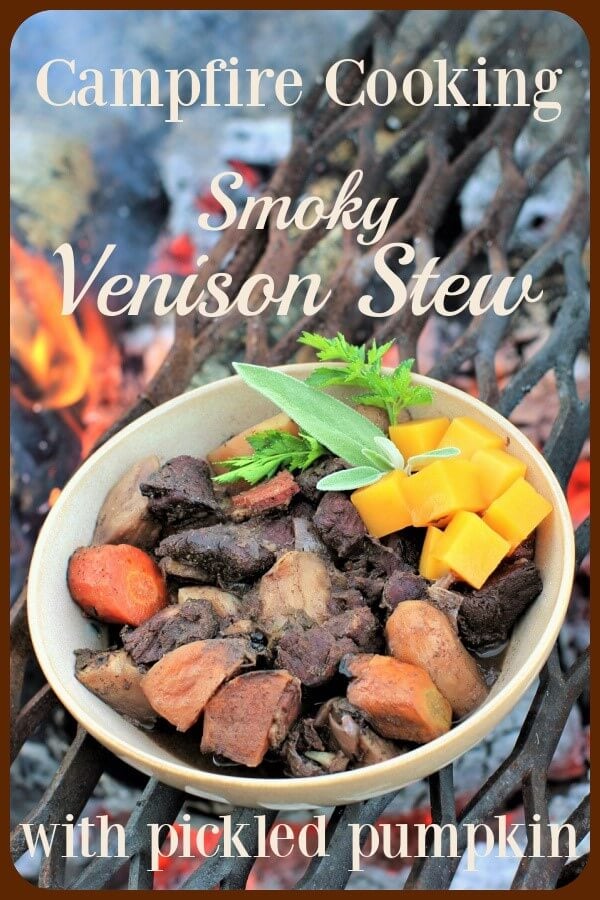