A platter of colourful roasted pepper salad dotted with roasted garlic bits and a sweet-tangy balsamic vinaigrette is a most wonderful side dish for any meal. Keep some roasted peppers and garlic on hand, too, to dress up sandwiches and tuck into casseroles, rice, or stews. (Skip to recipe.) 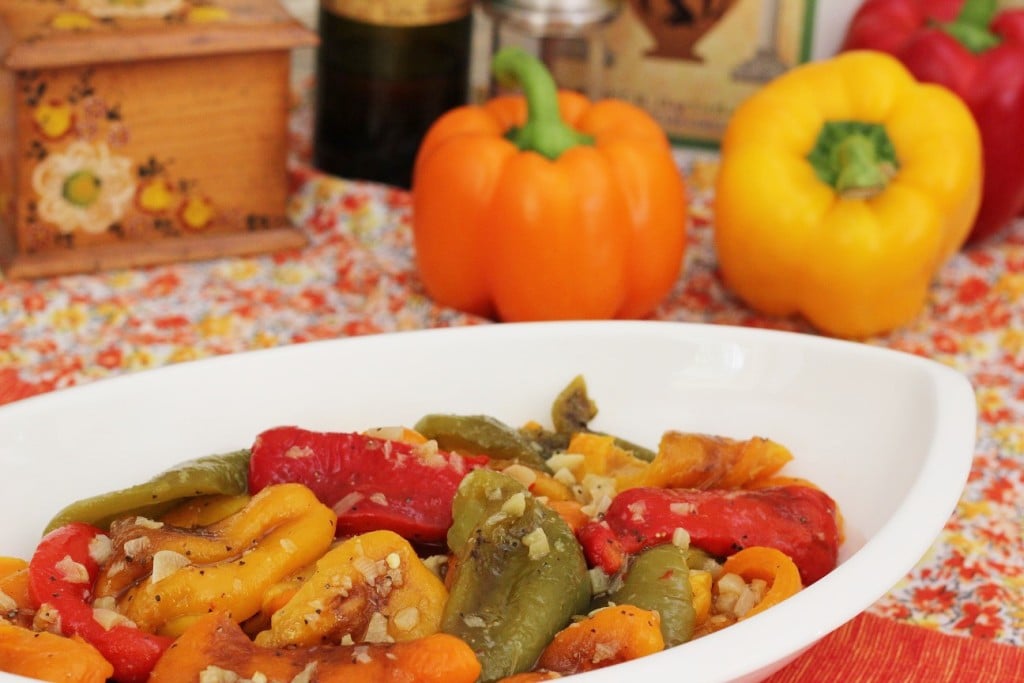 Bell peppers were on sale at the grocery store. So I bought a few bags (or maybe slightly more).

Vivid red, green, orange and yellow ones. I put them in a big blue emamelware bowl on my island and just admired their beautiful colours for a few days. They were shiny, juicy and fleshy. Then we started eating them. We ate them raw, and sauteed, and stuffed. I roasted several pans of peppers for sandwiches and salads.

That was my favourite way to eat them. Their flavour becomes rich and sweet with roasting. I always thought roasting peppers was something complicated, involving an open flame and careful blistering of the skins.

Instead, you oil them, broil them, sweat them and peel them. Easy. Who knew? (Well, you probably did, but I feel like I've discovered something special.) And when you throw a few unpeeled garlic cloves in to roast alongside the peppers, they turn sweet and mellow, complementing the peppers like they were made to be together. Slip in a little sweet white balsamic vinegar and a dash of oil, a shake of salt and pepper, and you have a smooth velvety summer salad. And don't be afraid of the amount of garlic in this salad - roasting it makes it sweet and mild and takes all the punch out of its garlic-breath power. 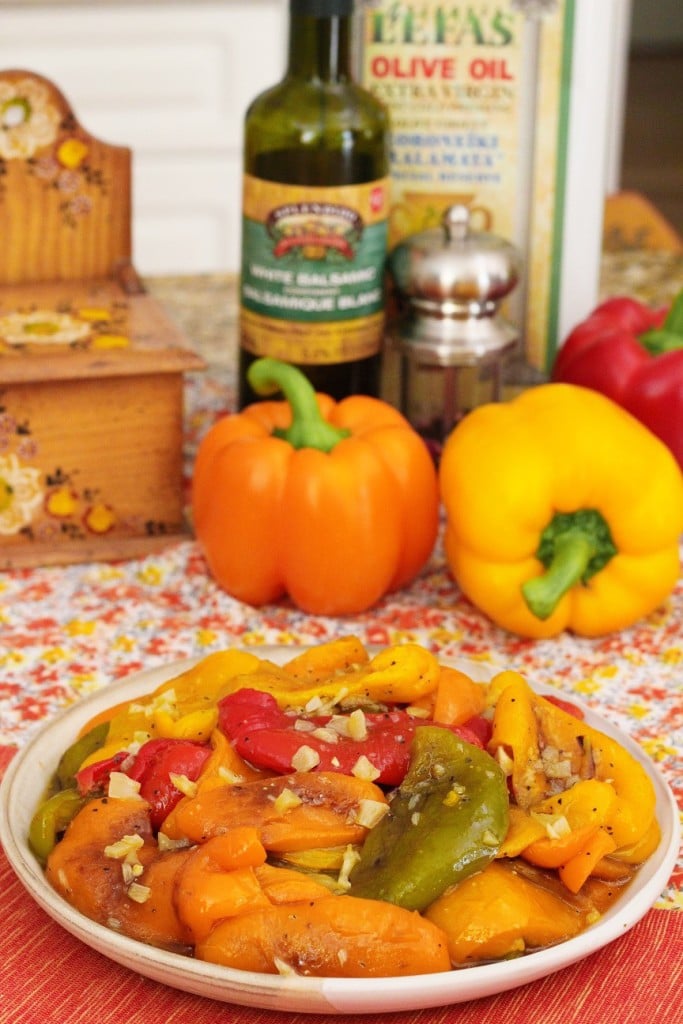 We enjoyed this salad out on our deck, in the sunshine, with the new green leaves gently whispering around us. It was glorious to eat outside for the first time this year, like we could finally let go of the breath we'd been holding so tightly all winter - just let it whoosh out in a gentle exhale, and then breathe in deeply of all the new spring smells.

I love eating outside.

Long, leisurely meals with loved ones, sitting and chatting and picking at the bowls when we are finished and think our bellies can't hold another mouthful.

There's always room for these peppers.

Kitchen Frau Note: Roast a few extra peppers while you're at it. They are handy for so many things - layer them on sandwiches, chop them into scrambled eggs, roll them into wraps, dice them into salads, or pilafs or risotto . . . . . . . . 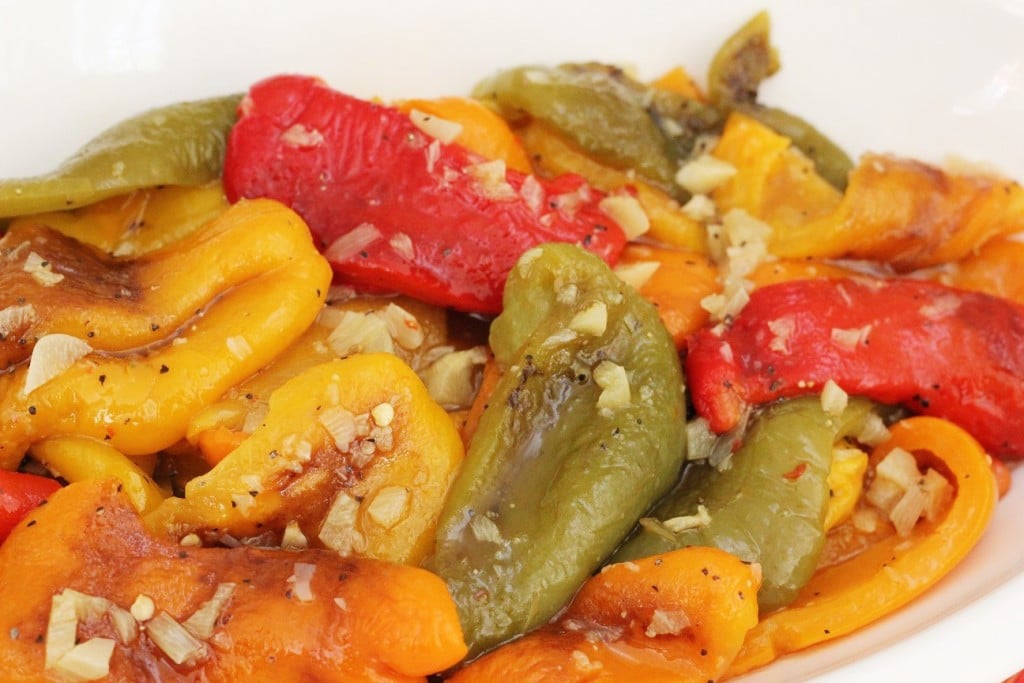 Cut the peppers in half lengthwise and remove the stems, seeds and membranes. Place them, cut-side-down, on a parchment-lined baking sheet. Using a pastry brush, coat the outsides of the peppers with olive oil. You will need a tablespoon (15ml) or a little more. 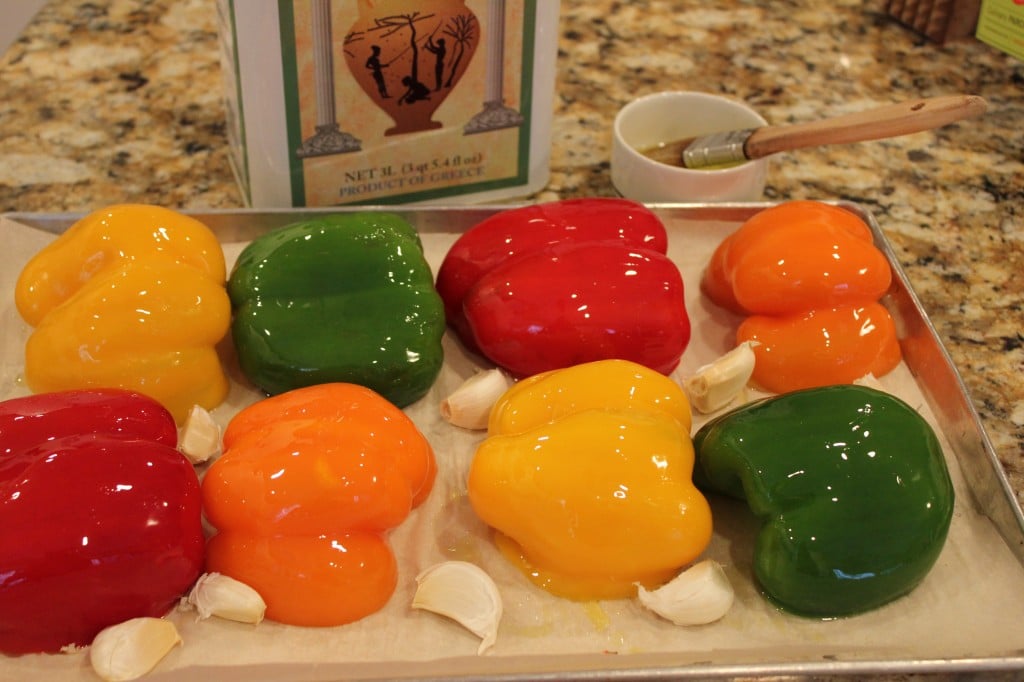 Scatter the unpeeled garlic cloves around the peppers.

Place on the top rack of your oven under a preheated broiler.

Broil for 13 to 15 minutes until the tops of the peppers are charred and blackened. (Don't worry - they look much worse than they really are - they'll be smooth and pretty when peeled.) 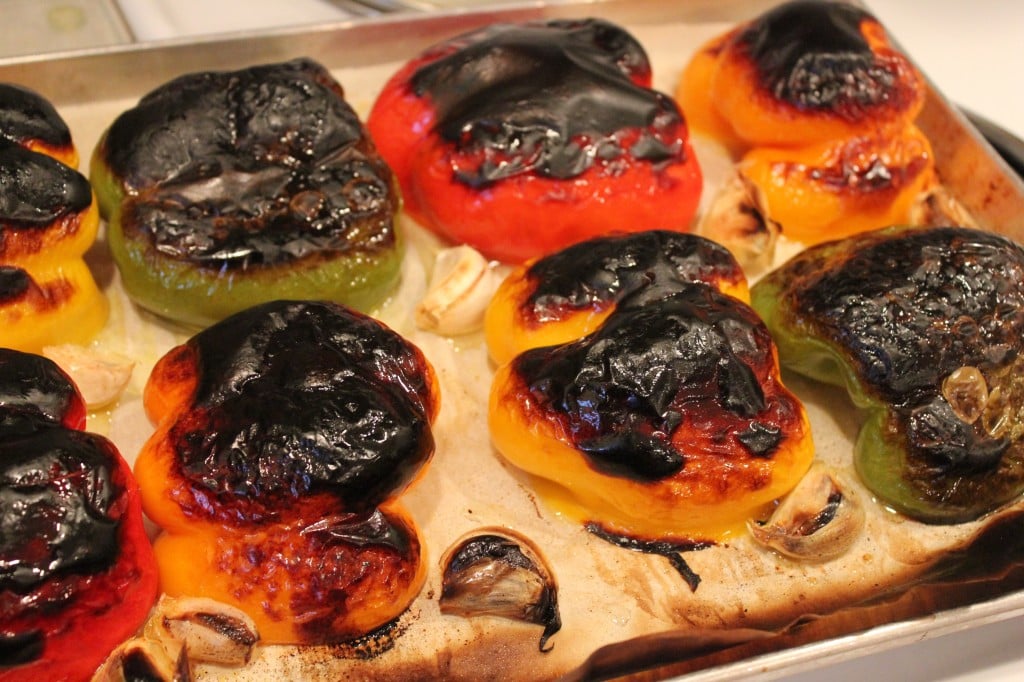 Place the roasted peppers and garlic into a bowl or pot with a tight-fitting lid, seal, and let sweat until cool. 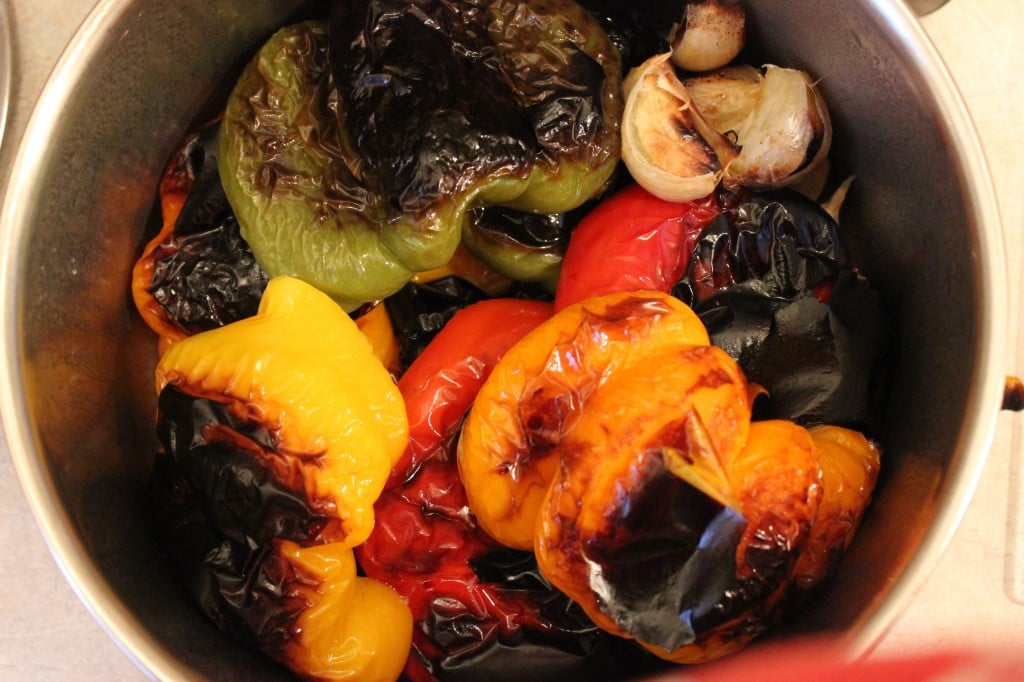 When cool, you will be able to slip off most of the skins with your hands. Use a paring knife to remove any stubborn bits, but don't be too fussy about it if you miss the odd little bit. Discard the juices (or use them in soup or stews). Cut the pepper halves into two or three pieces, along their natural section lines.

Peel the garlic cloves and, with a paring knife, shave off any browned or blackened bits.

Chop the garlic, and whisk it together with the white balsamic vinegar, olive oil, salt and pepper. 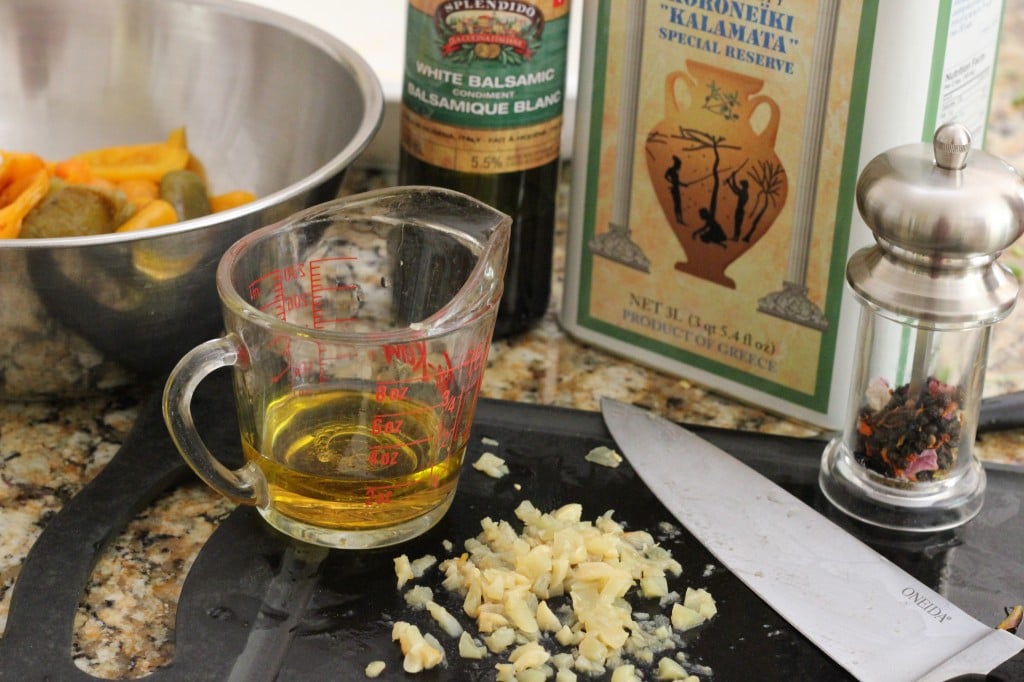 Toss the dressing with the peppers.

Let sit for  as long as you can stand it so the flavours macerate - at least 15 minutes up to several hours. Serve at room temperature.

Even better the next day (if there's any left).