Oh, boy, do these addictive little Chocolate Almond Bars fulfill that chocolate craving! And you don't even have to feel too guilty because they're made with very little refined sugar and have a lot of good-for-you ingredients in them. They've got a chewy bottom and a fudgy top - the perfect little indulgence - and they're crazy-easy to whip up in just a few minutes! Just stir the ingredients together and pat them into the pan. (Skip to recipe.) 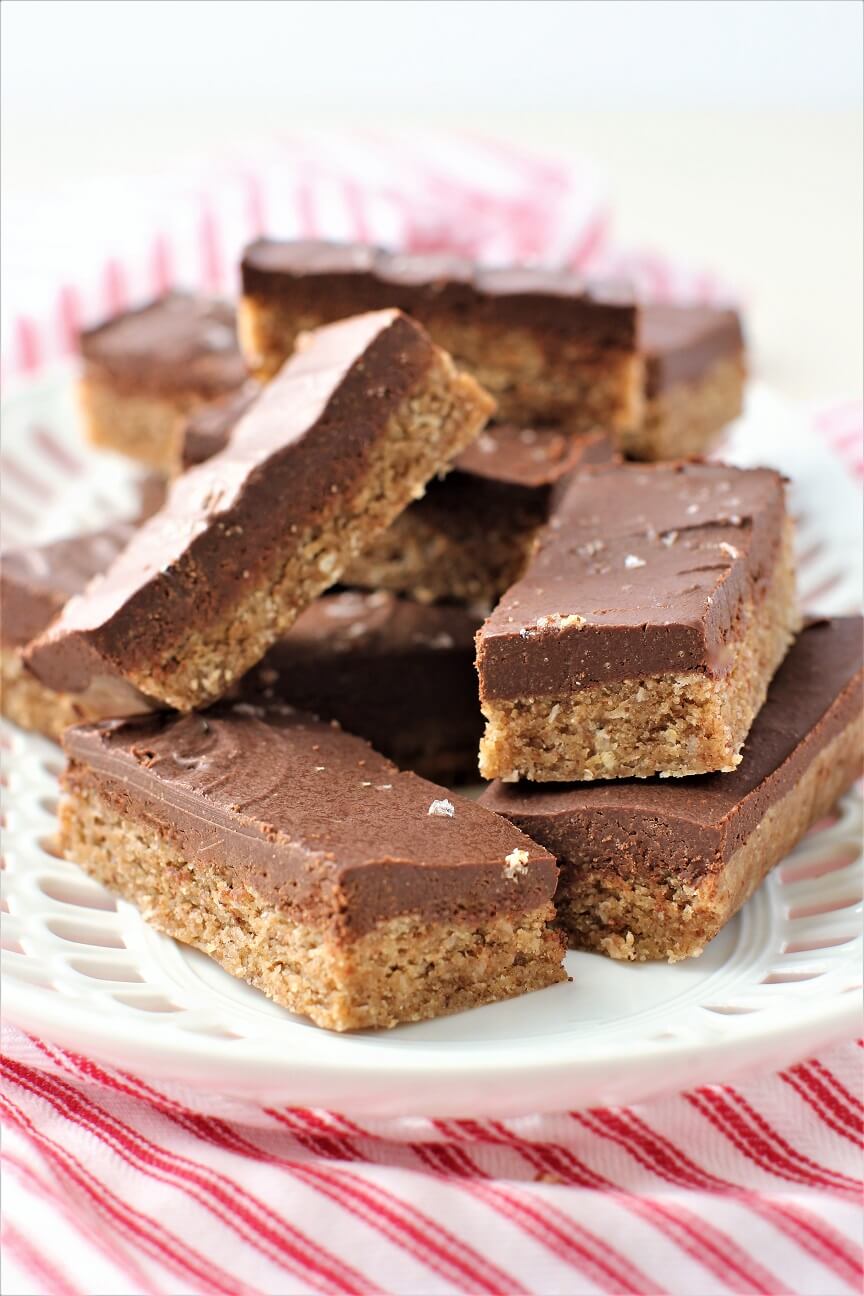 When your husband comes home from work and the first thing he says is, 'You've got to stop making those bars - they're just tooooo addictive,' what do you do? Well, you whip out the ingredients and stir together another batch. Because . . . you know . . . you listen so well (wink, wink).

These Chewy Chocolate Almond Bars are a cinch to make; there's no baking required. You're done in a few minutes with a pan of deliciously rich, fudgy squares chilling in the fridge. And you don't even have to feel guilty about it, because these bars are almost a health food - okay, they've got some chocolate in them, but we're all advocates for the 'chocolate-as-a-separate-food-group' movement, right?

It's amazing how just stirring some coconut flour, oats, and coconut into a mound of almond butter and maple syrup turns the whole mixture into a thick chewy mass that doesn't need to be baked. And then when you top it with a fudge made of more almond butter swirled together with that all-important chocolate, you've got a double layer of deliciousness. 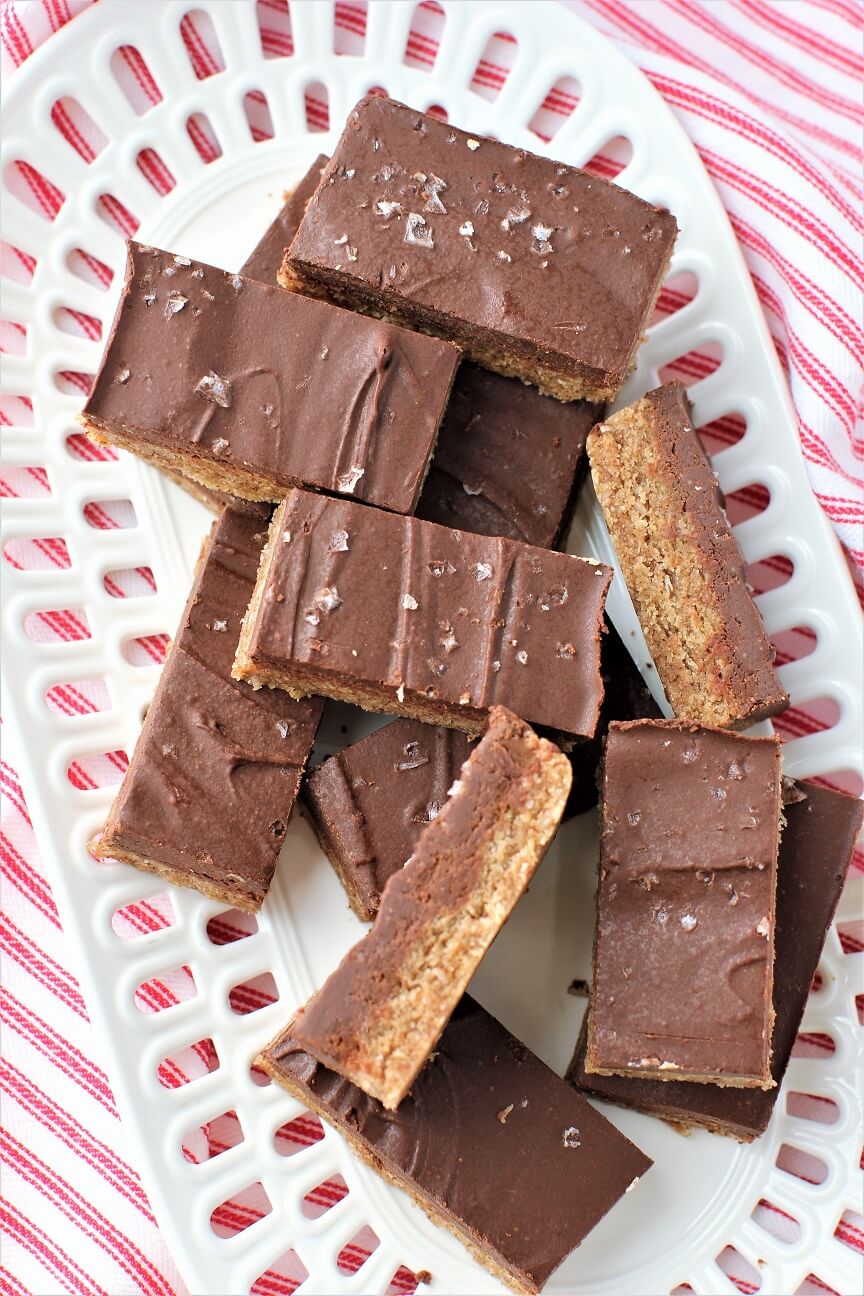 Plus, these bars are loaded with nutrients: protein, fiber, vitamin E, antioxidants (found in the almond skins which are included in almond butter), and minerals. Coconut flour is merely ground dried coconut, so it can be eaten raw. Almonds help you feel full for longer, so really, one of these little Chewy Chocolate Almond Bars as a snack will keep you from reaching for more 'junky' treats. It's a win-win situation, right? Fulfill the craving and stay healthy at the same time (each little bar has the equivalent of only 1 tablespoon of chocolate chips and ½ tablespoon of maple syrup).

If you're a fan of Nanaimo Bars, but reluctant about indulging in their ultra-sweet decadence, you'll be thrilled to know that Chewy Chocolate Almond Bars fulfill all the requirements to address the same craving but without any of the guilt.

This recipe comes from a new Donna Hay (the Australian Martha Stewart) cookbook I recently received and I was entranced with its simplicity. My interest in the recipe was definitely rewarded - the bars are an absolute hit in our house. I couldn't resist adding some almond extract to 'up' the almond flavour and a bit of coconut to the chewy layer to add some crunch and enhance the coconut flavour. And honestly, if you have some flaky salt kicking around in your cupboard - please add it - it makes the bars sing. Those little pops of crunchy salt work magic on chocolate, making it seem so much more intensely chocolatey. 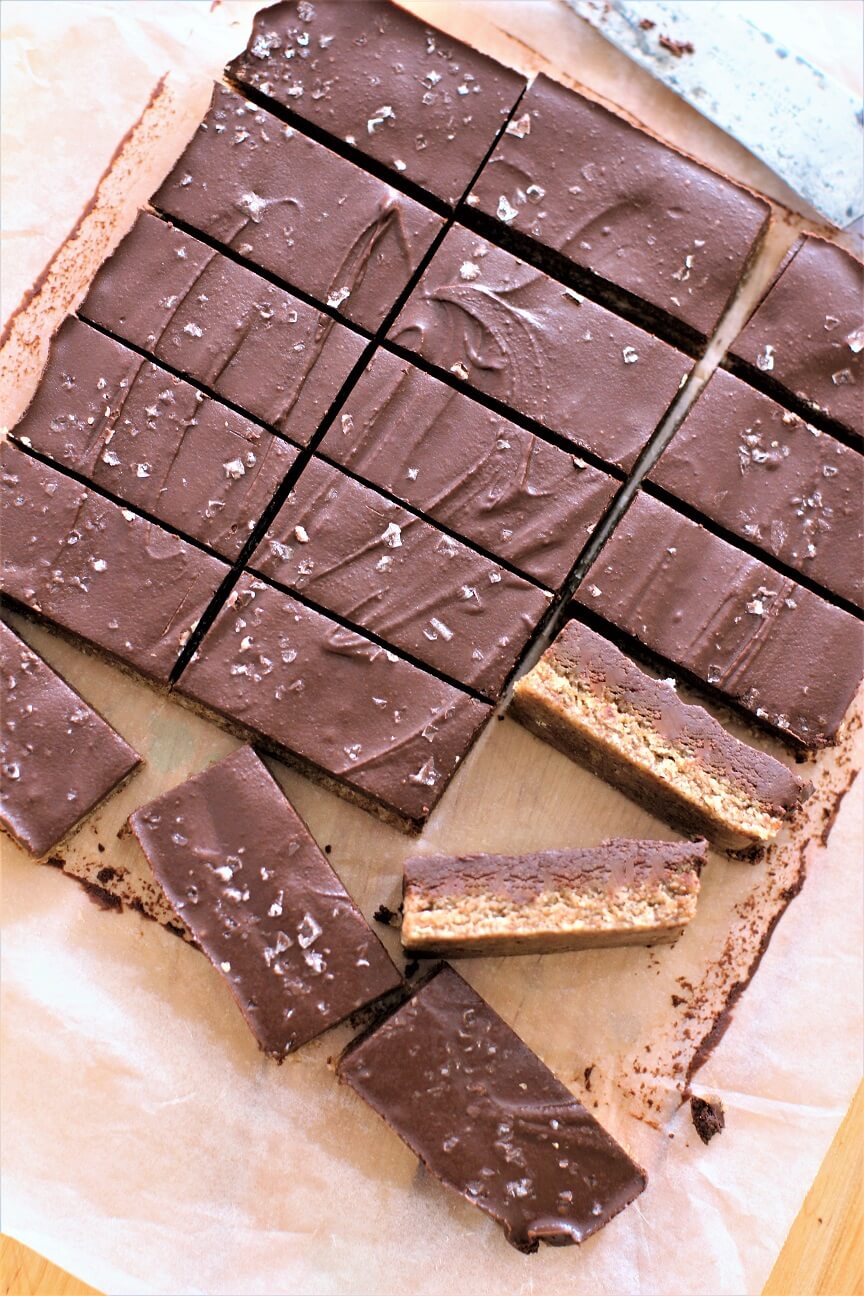 After the third pan of these delectable bars in as many weeks (with just two of us to eat them, mind you!), I know they've passed the taste test, the easy-to-make test, and the almost-healthy snack test.

Kitchen Frau Notes: You could also make these bars with peanut butter, but make sure to use the all-natural kind which is more runny and has the same consistency as almond butter. If using peanut butter, replace the almond extract with more vanilla extract.

Do not replace the coconut flour with another flour - coconut flour has a unique property of absorbing a lot of moisture, and it's what gives these bars their delicious chewiness. Another flour might not firm up the base the same way.

You could use all rolled oats or all shredded coconut if you don't have both in the pantry, or replace the coconut or the oats with finely chopped nuts of your choice.

Do not replace the Maldon flaky salt with regular salt (it will be much too salty). If you have another crunchy type of coarse crystalized finishing salt, you could substitute that. 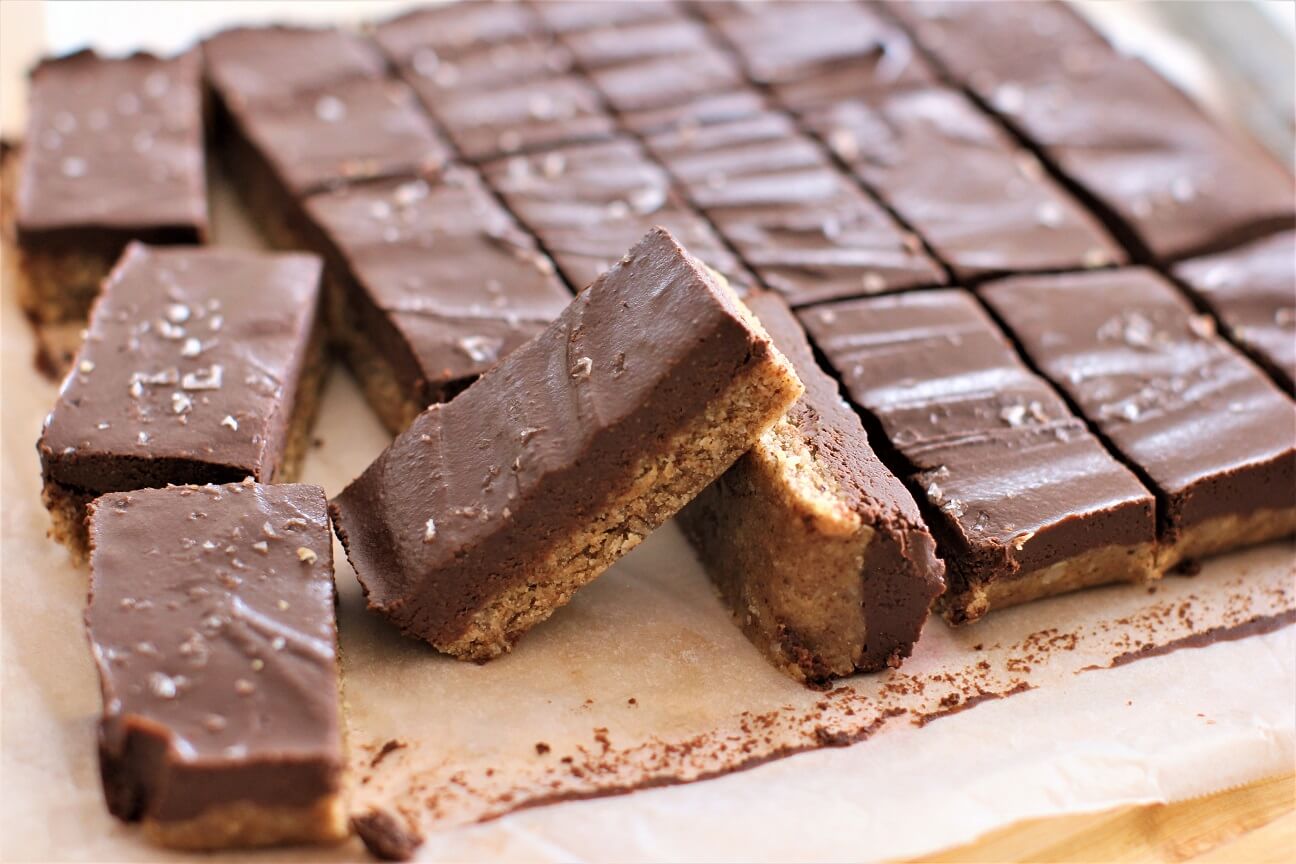 adapted from 'Everyday Fresh, Meals in Minutes' by Donna Hay

for the almond base:

for the chocolate top layer:

Make the base layer: In a large bowl (or in a mixing bowl with a stand mixer) stir together the almond butter, maple syrup, vanilla, and almond extract.

Add the coconut flour, rolled oats, and coconut. Stir to combine. If using a stand mixer, don't overbeat, or the oil will separate from the almond butter (still usable, but a bit more messy).

Pat this mixture into the prepared pan, pressing it down firmly and evenly.

Spread the chocolate evenly over top the almond layer.

Sprinkle with the flaked salt, if using (it really adds such a nice pop of flavour).

Chill for 3 to 4 hours or until the chocolate layer is completely hardened and set.

Store in a covered container in the refrigerator for up to 2 weeks (but I bet you they'll be long gone before then). 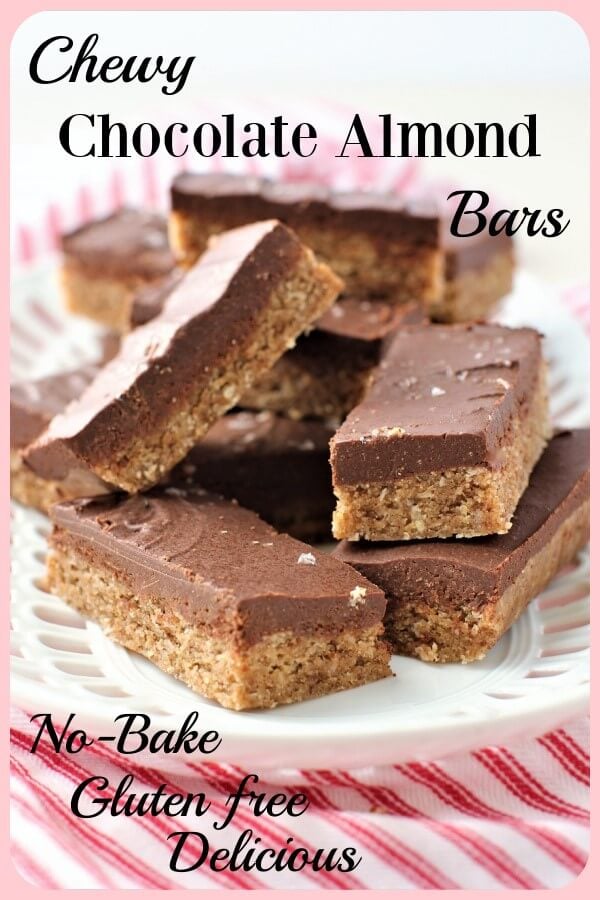