The best snack or teatime treat - a tray of piping hot gluten free popovers! Split them open and slather their steaming inside pocket with butter and jam. Eat them warm for a few mouthfuls of pure delight. (Skip to recipe.) 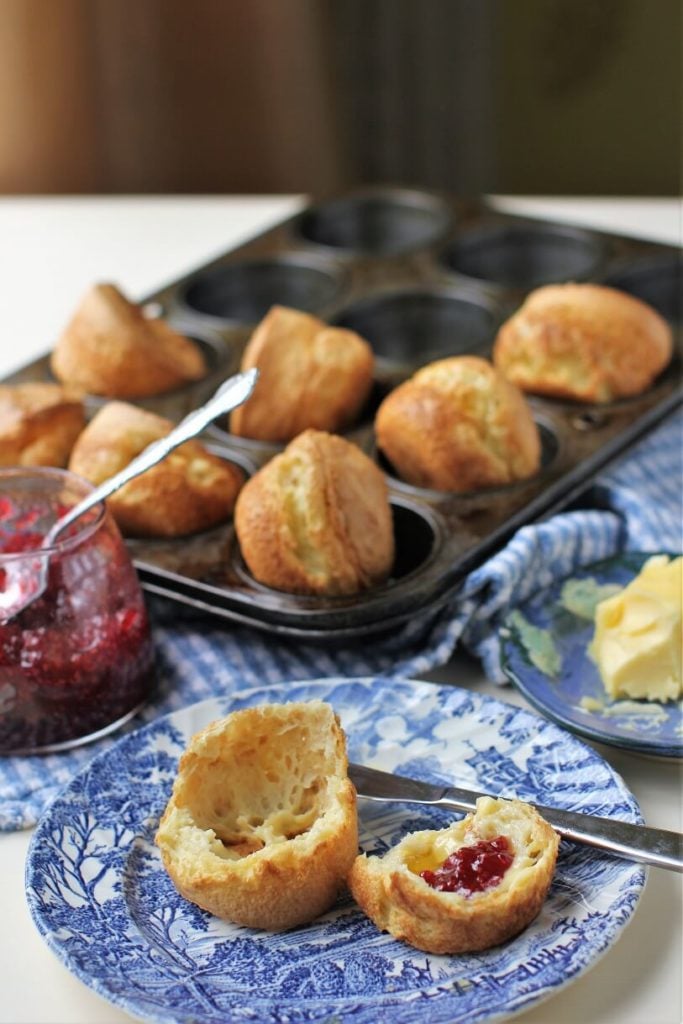 When my sisters and I were young, we always  knew it was the best day when mom baked bread. We'd cross our fingers as we got off the bus and ran up the driveway, lunch kits clanging and banging against our legs. We'd hope fervently that when we opened the door we'd hear the sizzle and smell the aroma of frying rounds of bread dough. Mom called them Flädle (flayd'-leh) and we loved them. She'd reserve a few bun-sized balls of bread dough and heat a shimmering layer of oil in the cast iron frying pan. She'd stretch out a ball of dough to pancake size, then fry it til it was bubbled up and crispy and golden on each side. She'd sprinkle it liberally with sugar and we'd eat the heavenly rounds with grinning faces and sugar-dusted cheeks.

Raymond's mom made the same delicious snacks for him and his six siblings when they were growing up, only they called them dough gods. What a simple but stunning treat: doughnuts' country cousins, really. Fry a piece of yeast dough and sprinkle it with sugar and you've got a universally loved food. (Think about beaver tails and elephant ears and all those other iconic country fair fried-dough favourites.)

I didn't bake bread too often when our kids were growing up, so they were deprived of this special experience except occasionally at their grandparents' houses. But I made another after-school doughy treat for our kids. Popovers. I'd have the popovers in the oven, timed to be hot, golden, and crispy a few minutes after the kids got off the bus.

I'd pull a muffin tin of the puffy golden treats out of the oven and the kids would dive in with cheers, splitting them open, popping in a dab of butter and a spoonful of jam. They'd eat them with butter dripping down their fingers and the same happy grins on their faces that we had eating our Flädle. 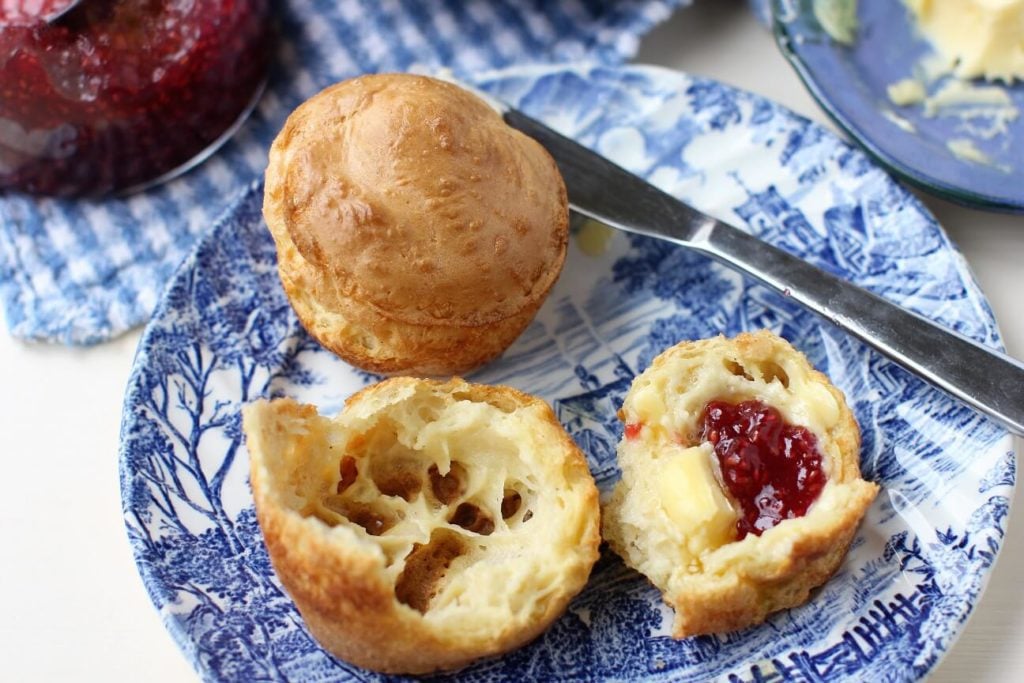 When Meredith and I started cooking together a few years ago, I made them for her one day after she came off the school bus. She loved them. Now they are her most requested after-school snack and she's learned to make them herself. 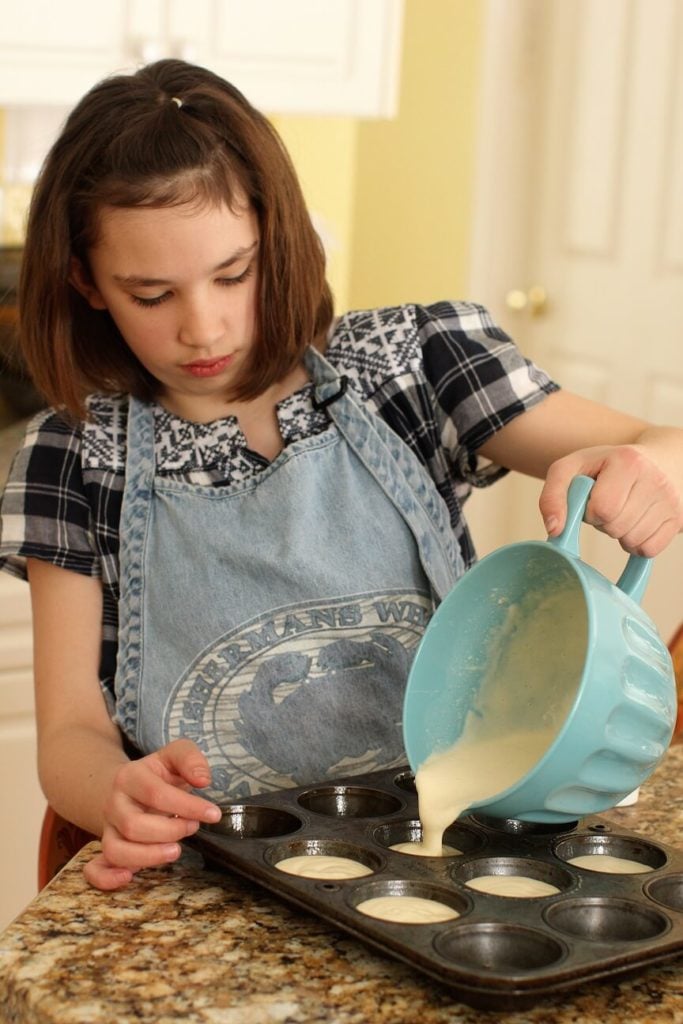 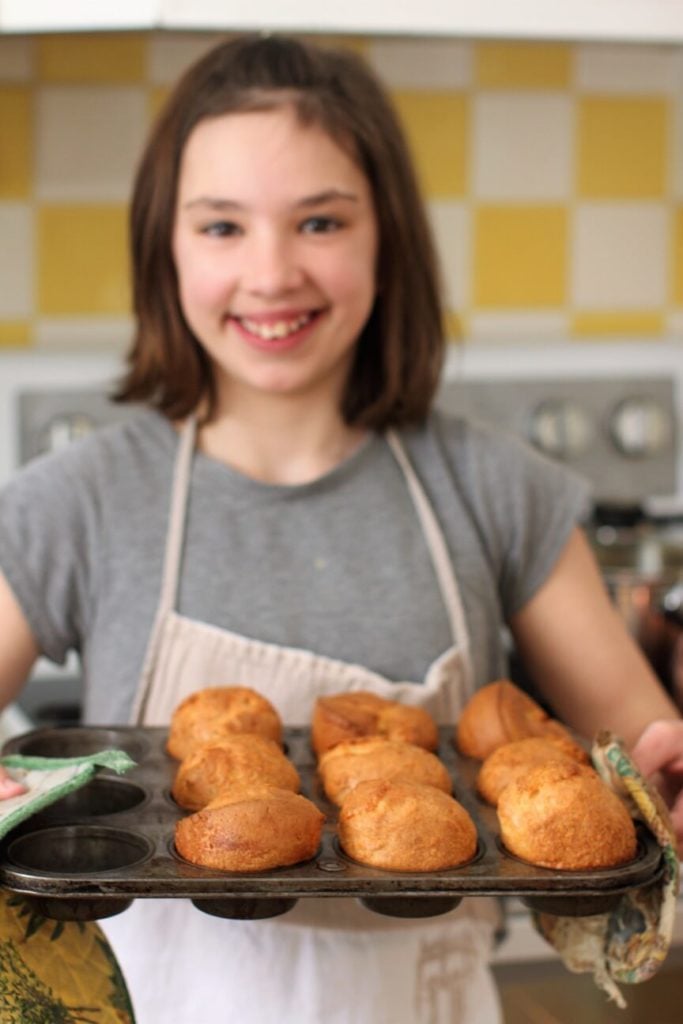 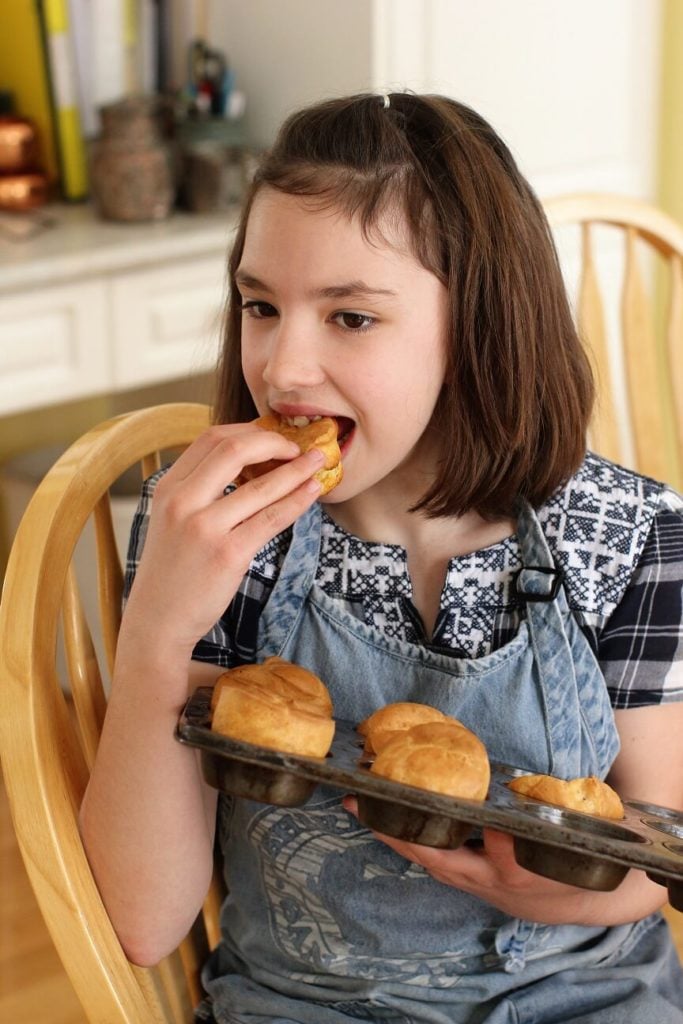 I've been working a long time to make a gluten-free version that worked reliably, and am so thrilled to finally get it right. Even so, popovers can be temperamental. Each batch rises slightly differently, and sometimes (for no reason at all, it seems) they don't rise or 'pop over' much at all, but no matter - they still taste great with butter and jam when split open. They are always comfortingly delicious.

When you've got it right, popovers rise high to more than double their height, with a crispy outside and big open bubbles inside. The bits of dough surrounding the air pockets are moist and creamy. The whole thing is really a big poof of crusty dough that makes a perfect vehicle for melting butter and jam.

Or - you can serve them alongside roast beef and fill them with gravy; popovers are similar to Yorkshire puddings, only made with a thinner batter and a bit more delicate, but they taste much the same.

Their appeal lies in the crispy exterior and insides comprised of bits of soft moist dough supporting big air pockets. Popovers puff up like lumpy funny-shaped balloons while baking, then release hot steam when pulled apart, deflating to make the best vehicle for a blob of butter and spoonful of jam. I like to put the top back on and bite down into a heavenly little sandwich of crispy soft popover  heaven.

You don't have to be a school kid coming off the bus to enjoy these gluten free popovers, but you might feel like one again.

Kitchen Frau Notes: I have only tested these popovers with my gluten free flour blend, and they work fantastically. If using another flour blend you may have different results. The tiny bit of added xanthan gum helps the popovers keep their structure and aids in browning and crisping the outsides.

The trick to making popovers is to start with a very hot oven, then turn it down halfway through without opening the oven door.

Popovers are best eaten warm, immediately after making them. 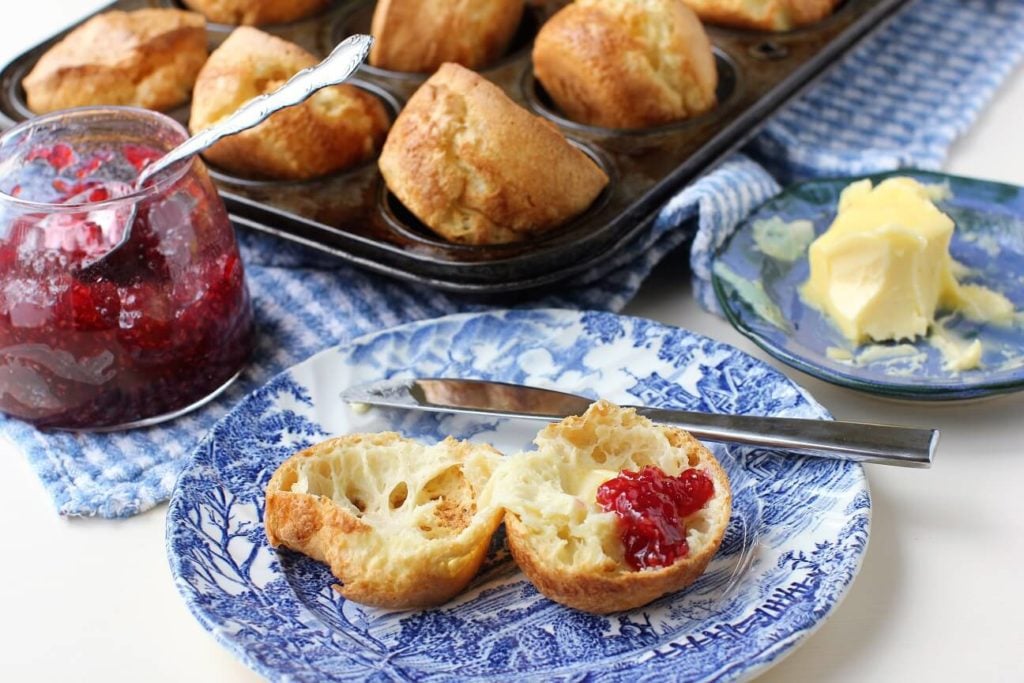 Combine all the ingredients in a blender container or a bowl. Blend until smooth, or use an immersion blender in the bowl to blend everything. You can also whisk the batter by hand or beat it with an electric mixer, just don't overbeat it. Only mix it until the lumps are gone. The batter should be about as thin as heavy cream.

Pour the batter into the 9 muffin cup wells, dividing it evenly between them.

Put the muffin tin into the preheated oven and bake for 15 minutes. Without opening the oven door, reduce the temperature to 350°F (180°C) and bake for 20 minutes more, until the popovers are an even golden brown. If you want to peek at the popovers, only do it by turning on the light and looking through the oven window - don't open the oven door. The popovers need the full time to bake, even if they look golden before that. They need to bake long enough to dry out on the outside so they don't collapse when you remove them from the pan. They should be crispy on the outside and moist and tender on the inside.

(This is the recipe I always made, before we had to go gluten free. I've included it for those of you that don't bake with gluten free flours. See above for the gluten-free version)

Whisk, beat, or blend all the ingredients together until you have a lump-free batter about as thick as heavy cream. Bake as above. 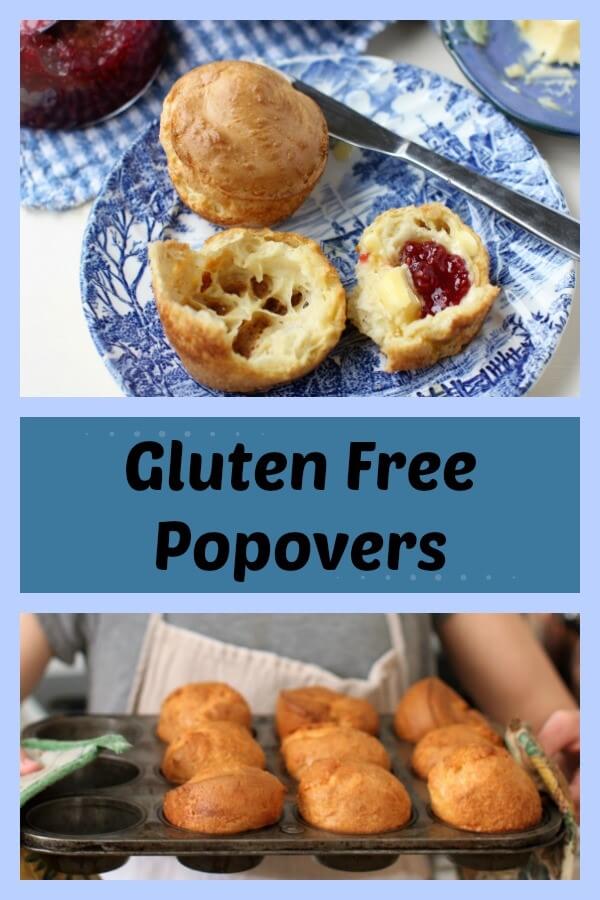 Rollpfannkuchen - is Just Another Name for Crepes

« Shrimp Laksa (Khung): A Taste of Thailand
Gluten Free 'Bran' Muffins - Just as Good as Those 'Other' Ones! »