German Potato Salad - try this different version of a potato salad - it's so simple yet loaded with flavour. Makes you come back for one more helping, and then one more. A great salad to complement summer barbecues and easy to take along for picnics and potlucks. (Skip to recipe.) 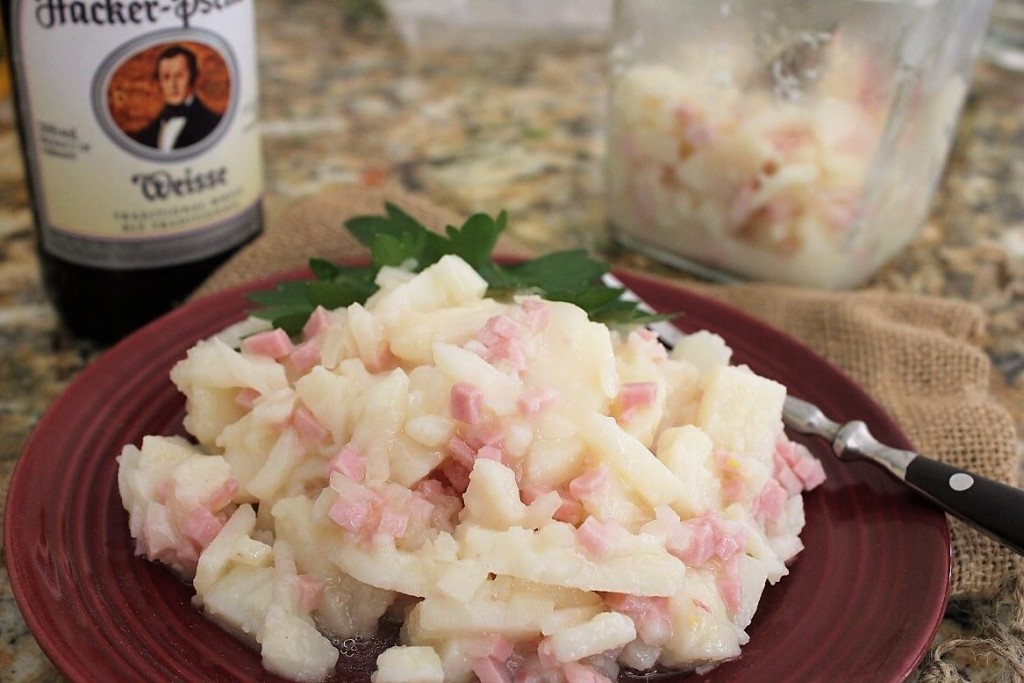 I'm back from our trip to Germany and Eastern Europe and have a recipe for German Potato Salad to share with you.

But first a recap. (Sorry this post is so looooooooong. I wanted to make it brief but I just couldn't do it, so if you just want the recipe, skip to the bottom of this post, with my apologies.)

What a glorious and amazing month July was for us. Maybe a little crazy to do a 4000 kilometer loop in 4 weeks (in Canadian terms that's just a weekend jaunt), but we saw and experienced so much that created memories to last us a lifetime.

We started our trip in Germany with dear friends and a trip to Burg Eltz, the castle Raymond has been itching to visit since me missed it on our last trip there.

After some wonderful visits and meals on the terrace under the grape vines, we headed off in our rental car to visit cousins in a village in the former East Germany. A memorable night visiting until late in the evening in the garden of their 300-year-old home, eating grilled Thüringer bratwurst, drinking weiβ beer and sharing stories and laughs.

Once we left the comfort of Germany, it felt like the adventure really began. Entering the Czech Republic was a whole new world. The villages looked more eastern, with the same red-roofed houses of Germany, but now painted in warm golds and oranges and peaches instead of white, and the church steeples marking each town had curving onion domes topping them. 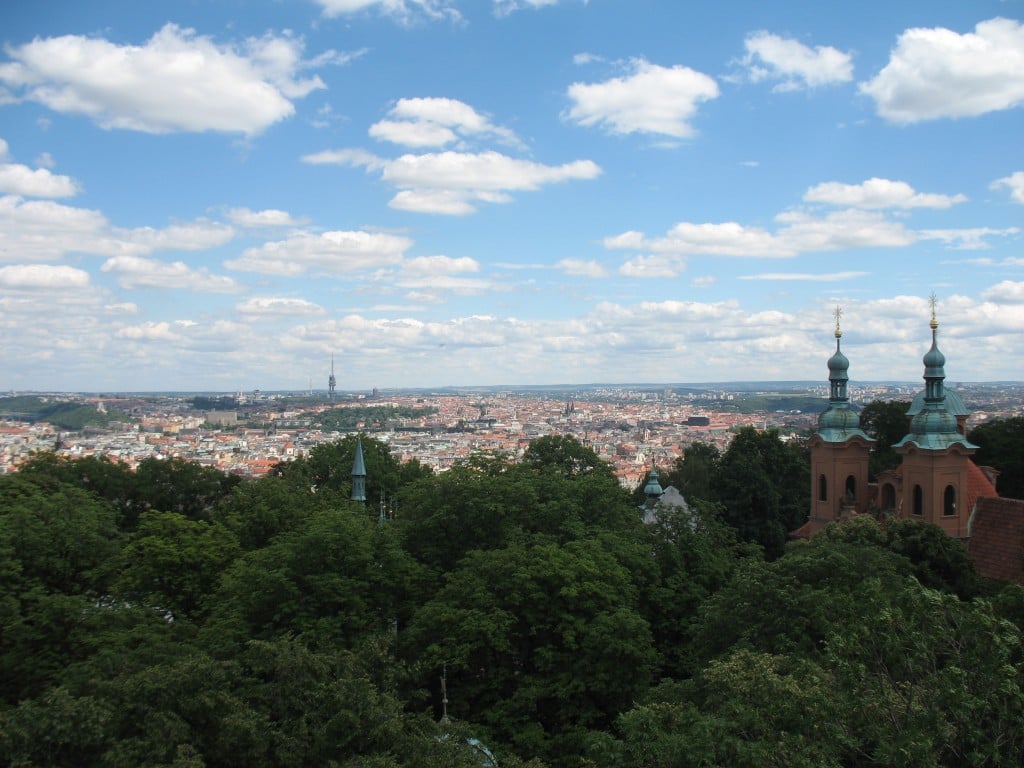 We started this leg of the journey with three major cities in a row, a few days in each. The first one was Prague. We were entranced with the beauty of this city, its river, its castle and its famous Charles Bridge. The view from the top of the Petrin tower was breathtaking, and when the lights started coming on as the evening settled in, it was magic.

Vienna was our next city, and here we gaped in open-mouthed awe at one amazingly beautiful building after another. It's a city of light and opulent old-world elegance. We thoroughly enjoyed a night at the Opera house, even though it was swelteringly hot high up in the nose-bleed section where we sat. And the stories of the Empress Elisabeth that we lapped up from our charismatic guide of the Sisi Museum will always connect that captivating and eccentric lady with the city of Vienna for me.

Next stop - Budapest. The first day there, Andreas and I had our cooking class - a memorable highlight of the trip for me!  If any of you ever visit Budapest, you absolutely must spend a day cooking the amazing food of Hungary with the absolutely lovely Agnes (pronounced Agnesh). She met us in front of the Central Market Hall with two baskets in hand and led us on a personal tour - the sights, sounds, tastes and smells of Hungary are all concentrated in this massive three-story building.

Then it was on to her apartment to cook and eat a traditional three course meal: cold sour cherry soup, chicken paprikash with nokedli dumplings (surprisingly like the German spätzle), cucumber salad, and Hungarian pancakes with apricot jam and cottage cheese filling. Oh my, I was in food heaven! I'm still happily glowing from that wonderful day. 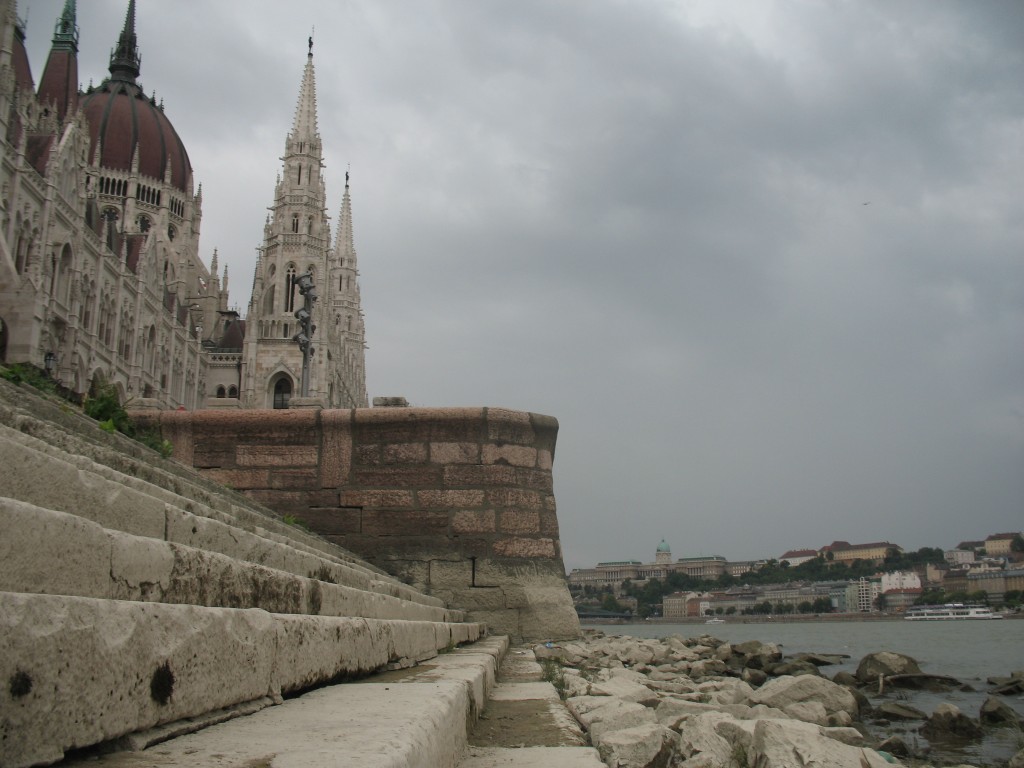 After exploring Budapest for a few days, we drove into Croatia and down the coast. This country is stunningly beautiful.

The villages are all pristine and colourful and the coastline is breathtaking. Dubrovnik is rightly dubbed "the pearl of the Adriatic", a walled city surrounded on three sides by the clear blue-green waters of the sea and lit from above by never-ending sunshine. Andreas had a thrill here doing some cliff jumping off the rocks through an opening in the wall.

Walking around the wall on a hot day, we had wonderful views of all the tiled roof-tops, newly replaced after the city was under siege during the war in the 1990s. Shrapnel damage and and the occasional bombed-out buildings are an emotional reminder of what that part of the world went through. But the joyful spirit of optimism and growth are heartening.

The two days we spent in Bosnia and Herzegovina were a further example of that. Here, in Mostar, the devastation was even more obvious, with many shells of buildings and a cemetary in which all the graves were marked 1992 to 1995.

It was hard to believe this was the place I watched being bombed on the nightly news in my lifetime. But the bridge we crossed to get across the green Neretva River was lovingly rebuilt and is now a Unesco world heritage sight.

Mostar has a real Turkish flavour, with minarets dotting the skyline and street bazaars overflowing with copper and colourful goods.

And the food was wonderful. Bosnians are masters of the grill so we sampled a wide array of smoky grilled meats with simple fresh vegetable side salads. And, oh, their great Turkish-style Bosnian coffee!

After we left Bosnia, we headed up the Dalmatian coast and into Istria, the Italian-influenced peninsula in the north of Croatia, and discovered the hilltown of Motovun, in the heart of truffle country.

Absolutely. . . stunning . . . view! (And most memorable meal of the trip!) We sat at an outdoor table next to the wall of the town and indulged in a three-course  truffle extravaganza: truffled cheese platter to start, veal medallions with truffles (both in the sauce and shaved liberally over all) and panna cotta with honey and truffles for dessert.  All while drinking the wonderful Croatian wine and admiring the spectacular view. Wow.

The next day we went back and had truffle risotto for lunch with a dessert of chocolate cake with truffles. Beyond wow.

(I brought back some truffle oil and preserved truffles and can hardly wait to experiment with them.)

We then journeyed on to Slovenia. Ljubljana (I found out how to pronounce it: Loob-lee-an'-a) is a beautiful city - like a smaller and simpler Vienna. We had two enjoyable days there, bike-riding, people-watching, and of course, eating. 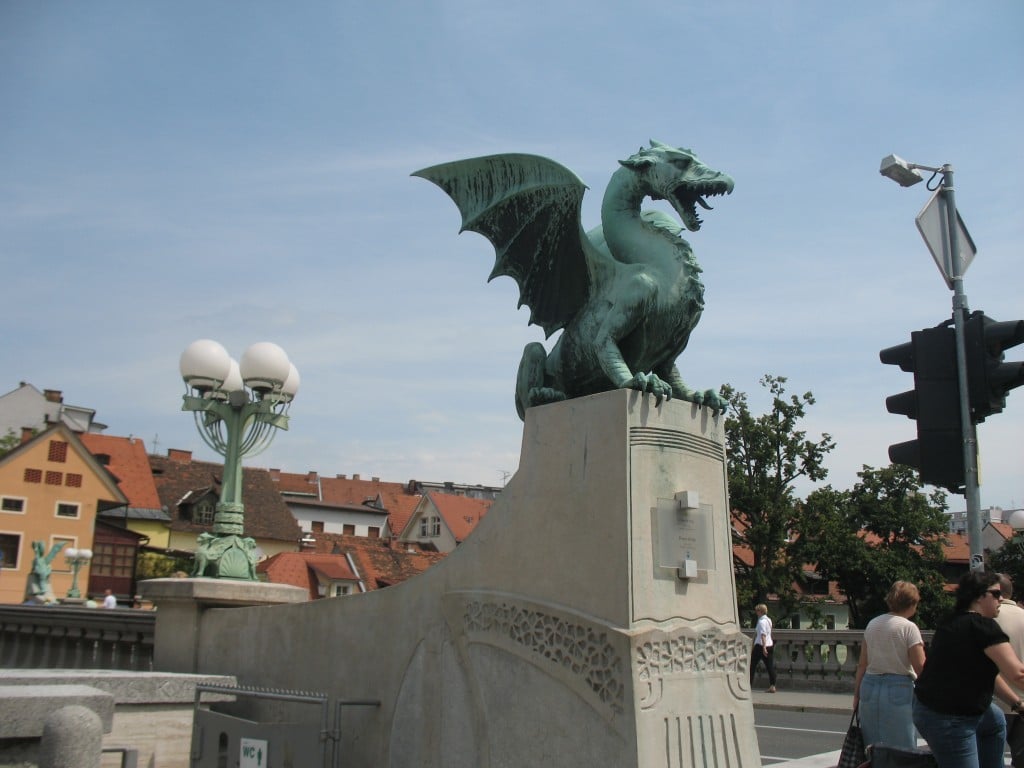 Austria was next, and it stirred my soul. We headed in to the country, past amazing mountains and picturesque villages with balconied, flower-bedecked houses and alpine meadows, to a beautiful small town called Hallstatt. Even though it was softly raining the whole time we were there, the stunning scenery of this town nestled on a hillside right next to a lake was like something out of a fairy tale book.

And the city of Salzburg was magical, too. Plus, being the Sound of Music fans that Andreas and I are, we had to go on a Sound of Music tour which took us around the city and into the lakes district of Austria to see where different scenes were filmed for the movie. Sitting and eating apple strudel at a cafe there was a wonderful dessert to our trip. 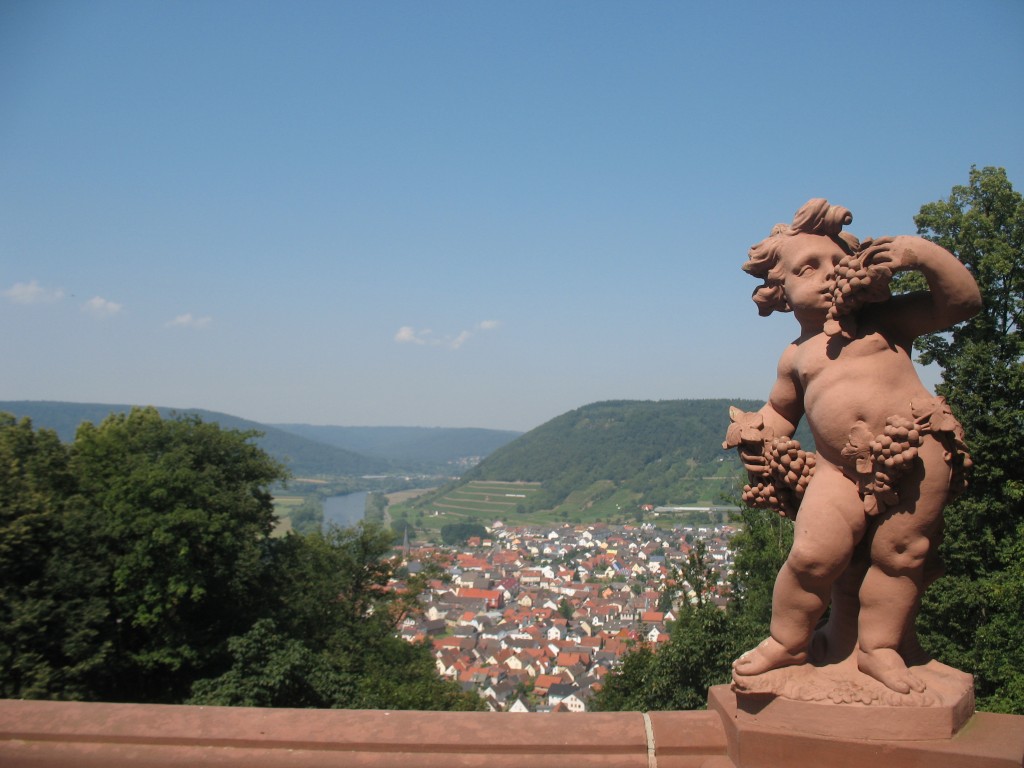 for a last few days with other dear friends, some local touring in the Odenwald, a Schmuckerfest (like a mini Oktoberfest) and this potato salad. The recipe is our friend Detlef's, and he served it with grilled sausages and feta-stuffed grilled pork rouladen, and of course, great mugs of beer. We devoured a huge bowl of the potato salad, taking seconds and thirds when we didn't think we had room for one more bite.

It was a wonderful, wonderful trip, with so many precious memories. I am so sad it's over, but as with all holidays, it is also nice to be home again.

My garden is calling me - the weeds missed me!

Kitchen Frau Notes: Detlef didn't really have a recipe, just told me the ingredients he used, so I tried to figure out specific amounts, and I think I've got it close. (As close as I can get in Canada, without that special German air and oom-pa-pa.) He made it with regular onions and diced ham, but also makes it without ham. I've made it twice in the days since we've been home, once with green onions and no ham, and once with regular onions and the diced ham. (I am a potato salad junky.)

Mmm, if I close my eyes I'm almost back in Germany again. 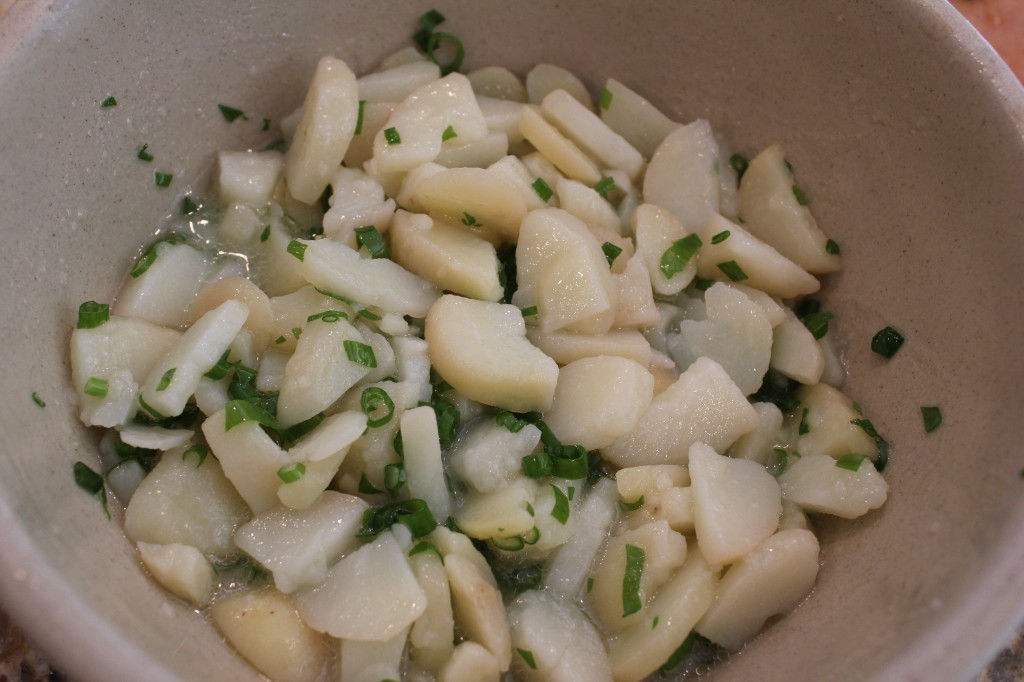 Boil the potatoes whole and in their skins, in about an inch of water, until they are tender when pierced with a knife, about 25 minutes. Drain and reserve the water.

Let the potatoes cool for 10 to 15 minutes so you can handle them, then peel, discarding the skins. Quarter them lengthwise and slice each quarter crosswise into thin slices into a bowl.

While still slightly warm, top them with the vinegar, oil, salt, reserved boiling water and chopped onions. (This allows the potatoes to absorb the flavours better.) Don't worry if there seems to be too much liquid - it will soak in as the potatoes cool. German potato salad is supposed to be moist.

If you are adding the chopped ham, add it when the salad has cooled to room temperature.

This salad is wonderful to make the day ahead, but also tastes great right out of the bowl in secret spoonfuls just after it's made. (Not that I'd know.)