Use your Evans cherries or other sour cherries to make Sour Cherry Brandy – you get the sweet-tart brandy to drink and luscious brandied cherries to eat. They’re perfect for gifting to hosts or friends at Christmas time, or for a grown-up treat all year round. (The Canadian Food Experience Project, September) [Skip to recipe.] 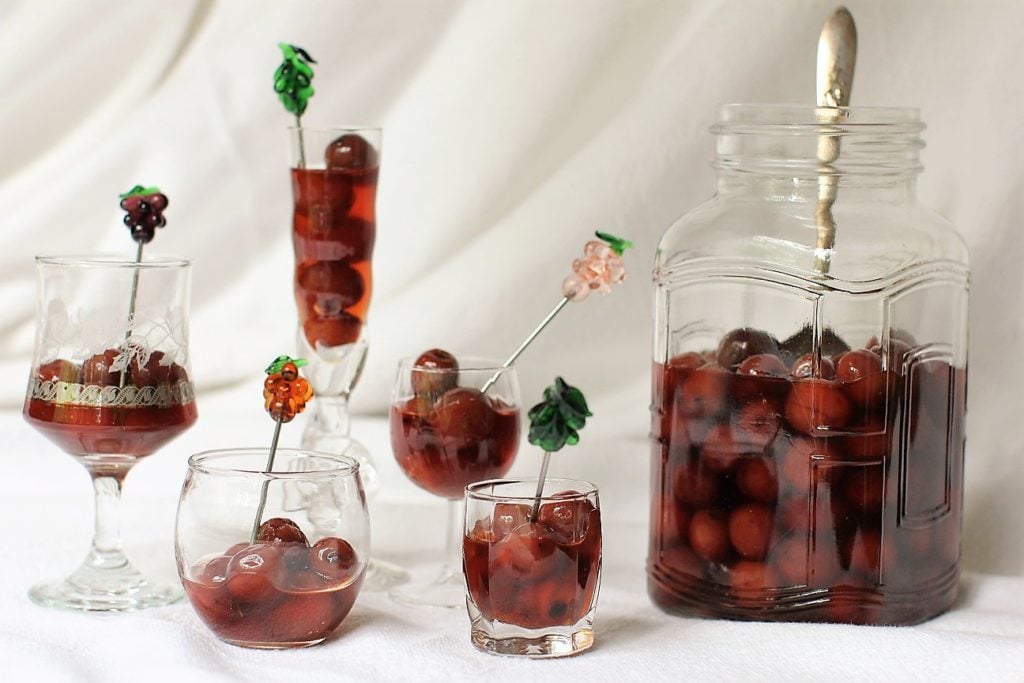 The Canadian Food Experience Project began June 7, 2013. As we, the participants, share our collective stories across the vastness of our Canadian landscape through our regional food experiences, we hope to bring global clarity to our Canadian culinary identity through the cadence of our concerted Canadian voice. Please join us. This month’s topic is: 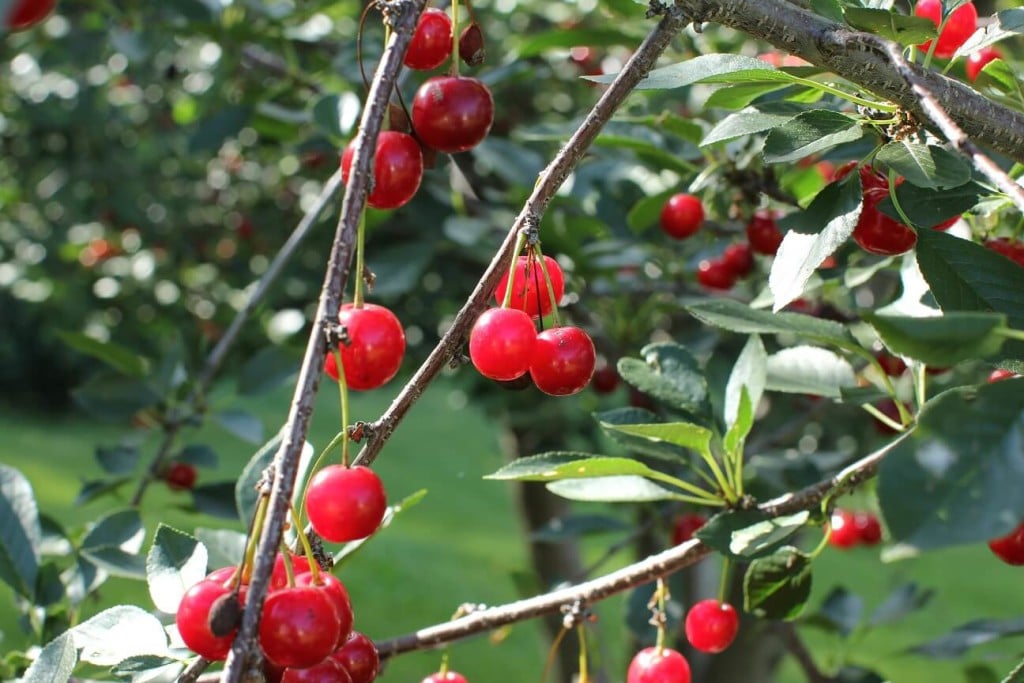 The Evans cherry boughs are hanging heavy with their ruby jewels, and they truly are a Canadian treasure. It is such a thrill to see those fruits ripening and to walk out and pick a handful of the tart, juicy cherries to munch on.

Cherries are relatively new to the Canadian prairies – the Evans has only been available to the public since about 1996. It was developed in practically our own back yard. Alberta horticulturist, Dr. Ieuan Evans, discovered an unknown strain of sour cherry trees growing in an old orchard northeast of Edmonton where they had been producing cherries since 1923. He propogated the suckers and distributed them everywhere, and within years, the Evans cherry exploded in popularity, now being grown all over Canada and into the United States and other cold climate countries in the world. The trees reach 10 to 15 feet tall and are easy to grow. They are reliable producers of heavy sour cherry crops, with large juicy cherries almost an inch across. 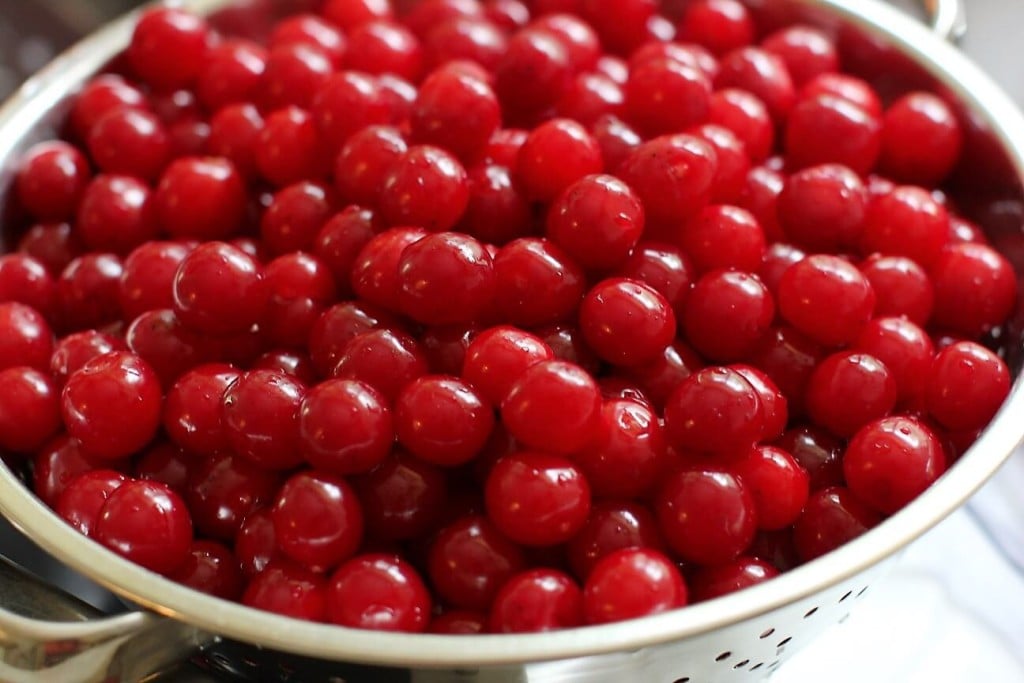 We have three Evans cherry trees in our yard, and in late spring they are a site to behold – masses of fluffy white blossoms make the trees look like big lacy snowballs. Throughout the summer the trees are glossy green, and then by late summer they hang heavy with the shiny red cherries. If you leave the cherries on the trees longer, they get even sweeter. They’re the best in early September. Picking the cherries is a joy, as they hang in large bunches that fill your hands. Pails fill up quickly. This year our crop was less than in some years (and a bit hail-scarred, too), but the cherries were still enchanting – like trees out of a storybook. In the fall the leaves turn a lovely yellowy-orange. 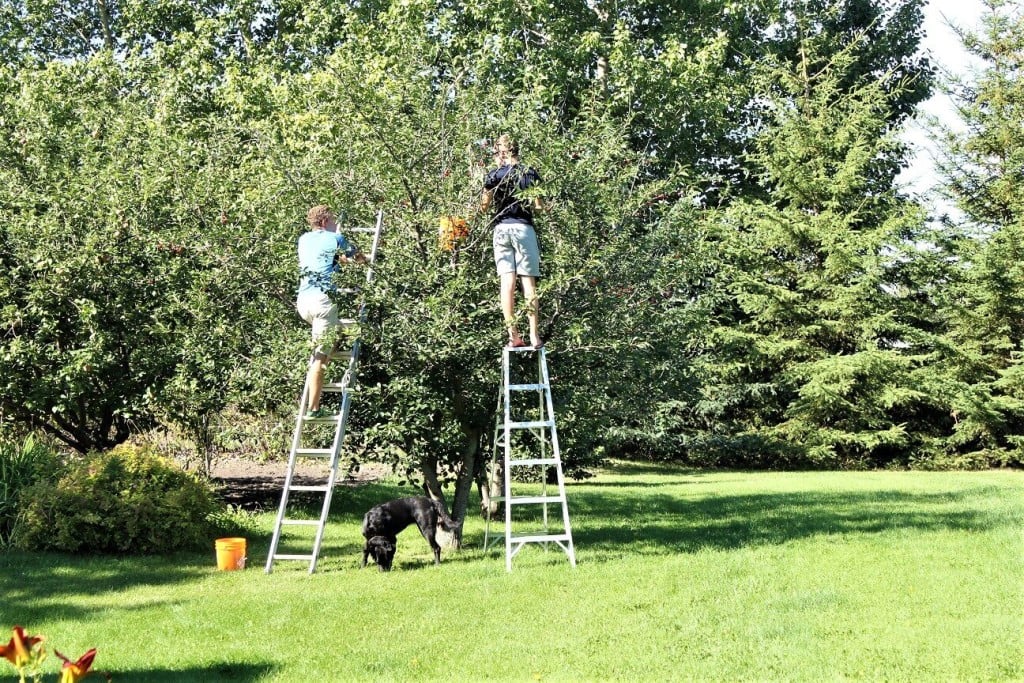 Every year I make gallons of juice concentrate with the fruits – cooking the cherries with the pits lends a subtle spicy almond flavour that causes people to sip, puzzle, and smile as they taste the juice. It’s such an complex flavour.

Some years I do the tedious and messy business of pitting the cherries and freezing them for winter compotes and toppings. Sometimes I make preserves or jam or jelly or sauces. Often I make a sour cherry cordial or a shrub (a vinegar-based concentrate). But I always fill at least 4 or 5 gallon jars with cherries, brandy and sugar to set aside into the basement for a few months. In the dark, while no one’s peeking, something special happens. 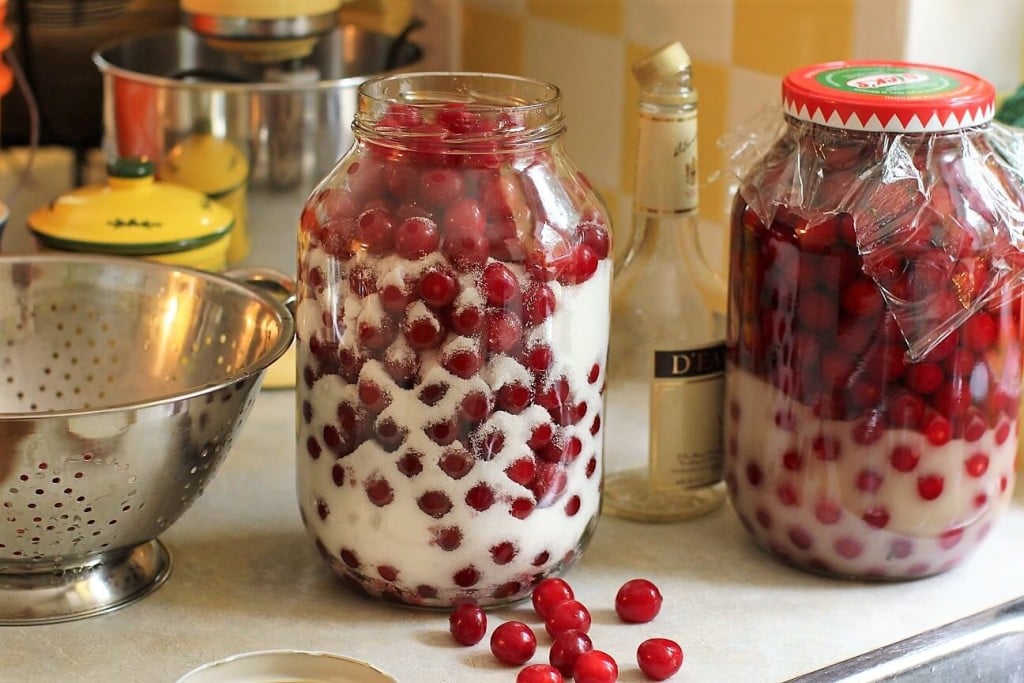 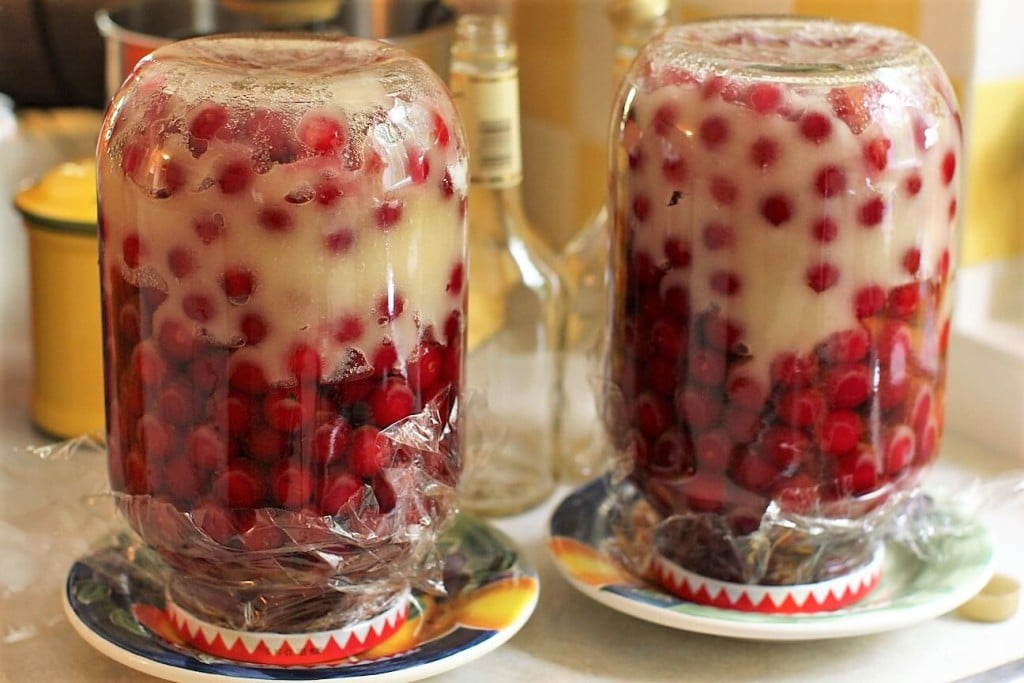 The brandy and sugar work magic on the cherries to create sweet little pearls of flavour. The cherry flavour intensifies and the almond flavour of the pits is even more pronounced than in the juice. The neon red colour of the cherries deepens to become a rich burgundy, and the flesh condenses and firms up beautifully. At Christmas time I bring up the gallons and re-bottle them into smaller jars to give to all our friends for a little taste of summer cheer.

The brandied cherries themselves are wonderful spooned over ice-cream or cheesecake or other desserts with a drizzle of the syrupy cherry brandy. And the brandy is delectable to sip on its own. Sometimes after a large meal, I just give everyone a fancy little liqueur glass with 6 or 7 cherries and a good splosh of the brandy poured over. I stick in a fancy pick to spear the cherries and everyone finishes with a nightcap shooter of the brandy. Simple heaven. 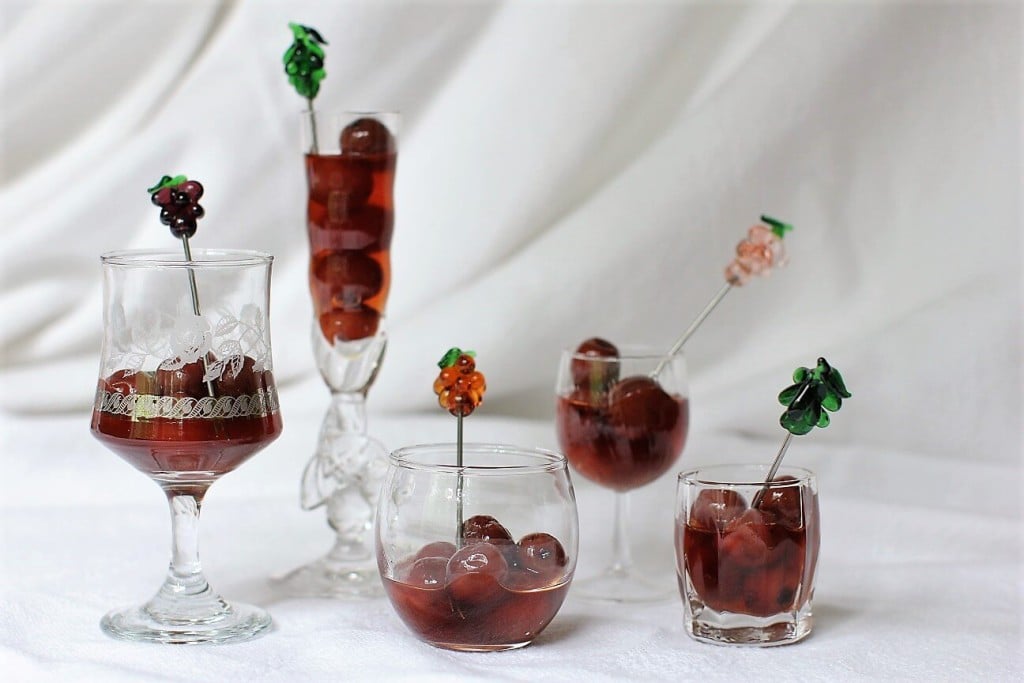 I remember, when I was a young girl, my Opa often buying miniature boot-shaped liqueur glasses filled with a few sour cherries in brandy, at the German delicatessen. He would enjoy them as a treat and sometimes let us grandchildren have a tiny lick of the syrup. I still had one of those little boot-shaped glasses until a few years ago, though now it has disappeared. But no mind, these brandied cherries still remind me of that grown-up treat from childhood. And I have gallons of the cherries to play with.

Now that we have our very own Canadian prairie cherries, we can indulge in all kinds of cherry shenanigans.

This recipe really is a treasured Canadian recipe because it is made with a true Canadian fruit – the Evans cherry – and treasured in our family because it’s a Christmas tradition we enjoy all year round.

Kitchen Frau Notes: for this recipe, there is no need to buy ‘good’ brandy. I always choose the cheapest bottles of brandy I can find in the liquor store. The cherries have such a wonderful intense flavour, that the brandy flavour is totally transformed.

I make this in glass gallon jars, but I think it would work just as easily in quart-sized canning jars. Just use one cup of sugar per quart, and fill up to the top with brandy.

If you can’t find gallon glass jars, buy a gallon jar of pickles at Costco and re-bottle the pickles into quart jars to store in the fridge and use later. Rinse out the big jar, and it’s ready to go! 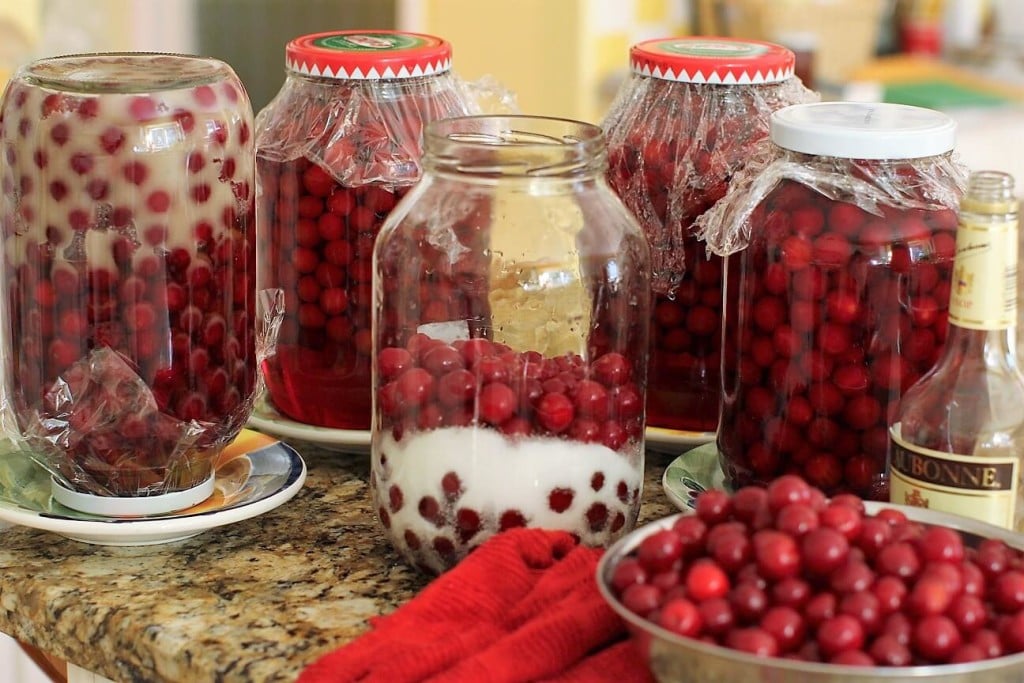 Pack a clean glass gallon jar about ¼ full of cherries. Pour on 1 cup (200gms) of the sugar. Repeat with more cherries and sugar until all the sugar is used up and the jar is full to the top with cherries.

Cover the jar with a piece of plastic wrap and screw on the lid as tightly as you can.

Tip the jar upside-down onto a small plate (in case there are any leaks). After a few hours tip the jar right-side-up again. Continue turning the jar several times a day until the sugar has all disolved. This will take 3 or 4 days.

Set the jar in the sink and rinse off any dried-on sugar syrup leaks that might have dribbled down the outsides of the jar. Dry the jar and set it in a cool dark spot to steep for at least a month and up to 6 months. (The waiting is the hard part!) I set it on the cool cement basement floor in a dark corner.

After a month it’s ready to rebottle – perfect for Christmas giving or fall sipping. Just divide the cherries and brandy (portioning them out so there’s the same ratio of cherries to brandy in each jar) into smaller jars, screw them tightly shut (no need to heat seal them – that would destroy the alcohol content), wipe any sticky drips off the outside, add a nice label, and store in a cool, dark place until ready to use or give away.

Some people like to strain out the cherries and just drink the brandy, but I think the cherries are the best part! (A friend of mine strains the cherries out and keeps them in the freezer for snacking, and serves the cherry brandy separately.) I like to keep the cherries in the brandy to serve over ice cream or cake. I often serve a small glass with the brandy and 5 or 6 cherries in it, along with a decorative pick, as an after-dinner treat when we’ve had dinner guests. It’s a lovely end to a special meal.

The brandied cherries are good for at least a year – if they last that long.

Makes one gallon of brandied cherries.

How to Pit Evans Cherries 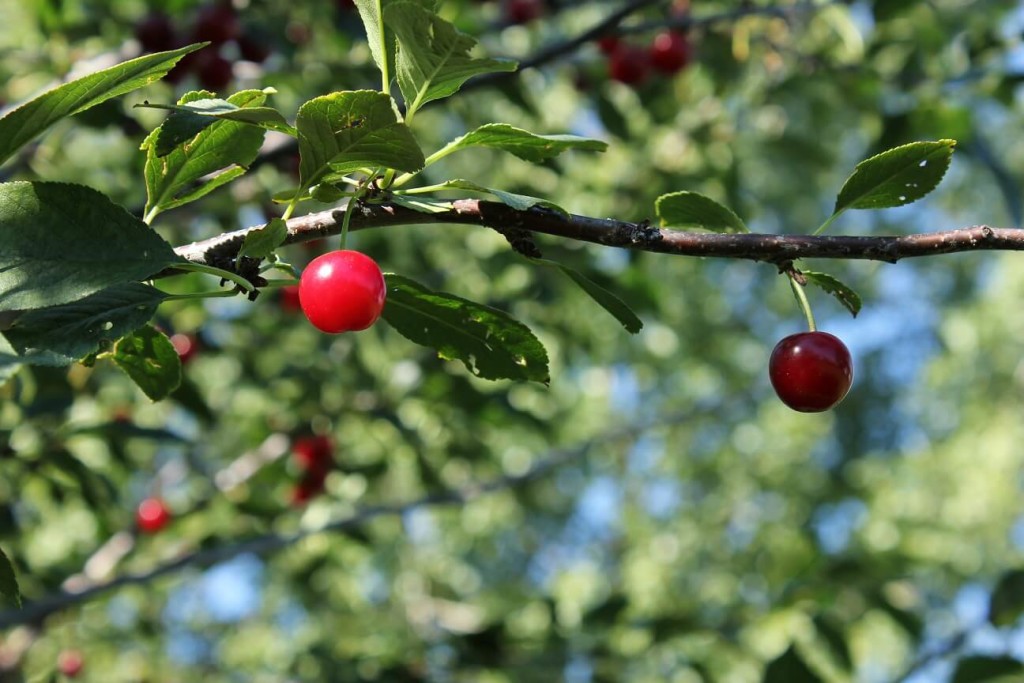