A little bit of heaven; fresh-caught trout, cornmeal-crusted and fried to crunchy crispness just hours after it was swimming in the lake, and a steaming baked potato, buttery and rich with sweet roasted garlic. (Skip to recipes.) 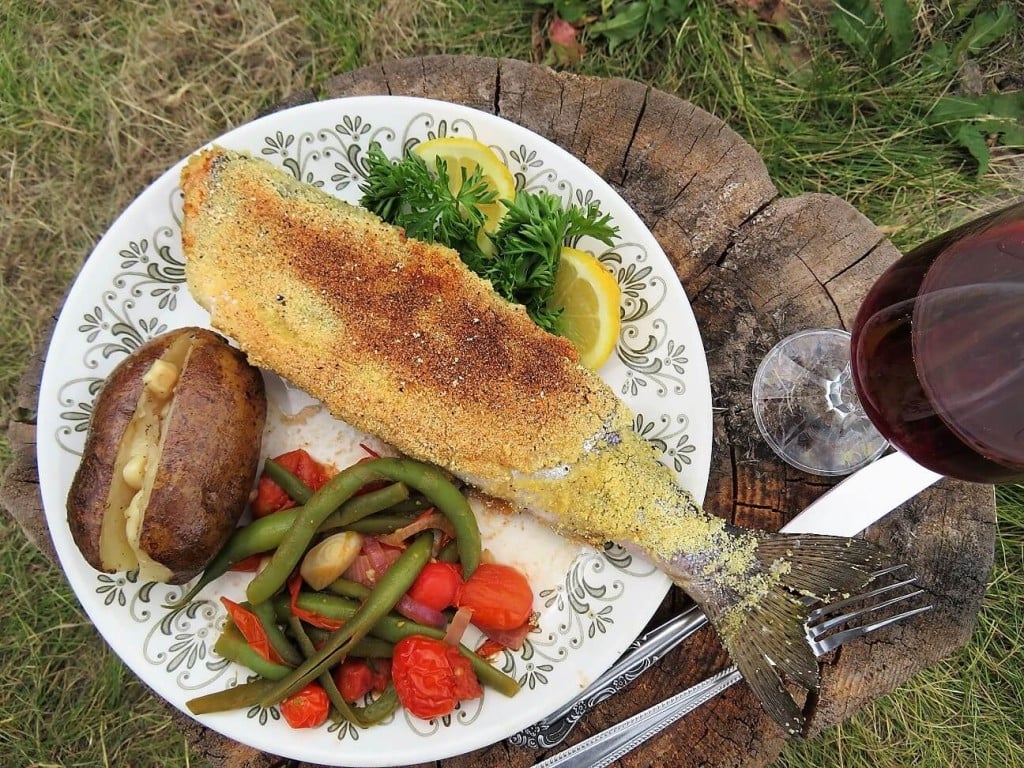 I'm back from the lake. 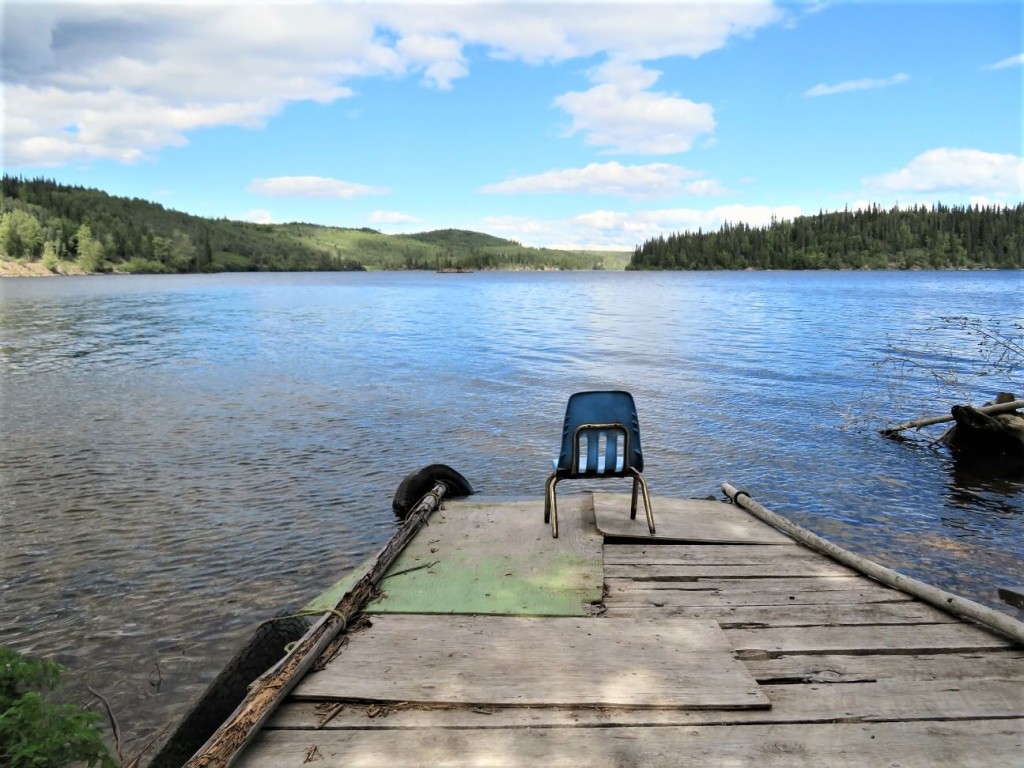 We went to the cabin.

I saw my dad everywhere.

I saw him in the cabin, lovingly built from logs, the place he was happiest at.

I saw him in the dock, now falling apart, that he built with timbers he'd sawn himself  and the metal hardware he'd forged by hand.

I saw him in the sauna stove, welded from iron scraps saved in his yard.

I saw him in his chair in the cabin kitchen, untangling fishing lures and organizing his tackle box before he headed out.

I saw him in the lake, how we'd see the speck of his boat in the distance, hour after hour, trolling for char or casting for trout.

I saw him in his boat, the one he built from scratch, as he came chugging in to shore, grinning proudly with a pail of fresh-caught fish.

I saw him in his workshop, an Aladdin's cave of metal pieces, cans of bolts, bits of motors, oars, and wires.

I saw him in the trees, as the wind blew through the branches. I saw him there, whistling as he walked the mossy trails. 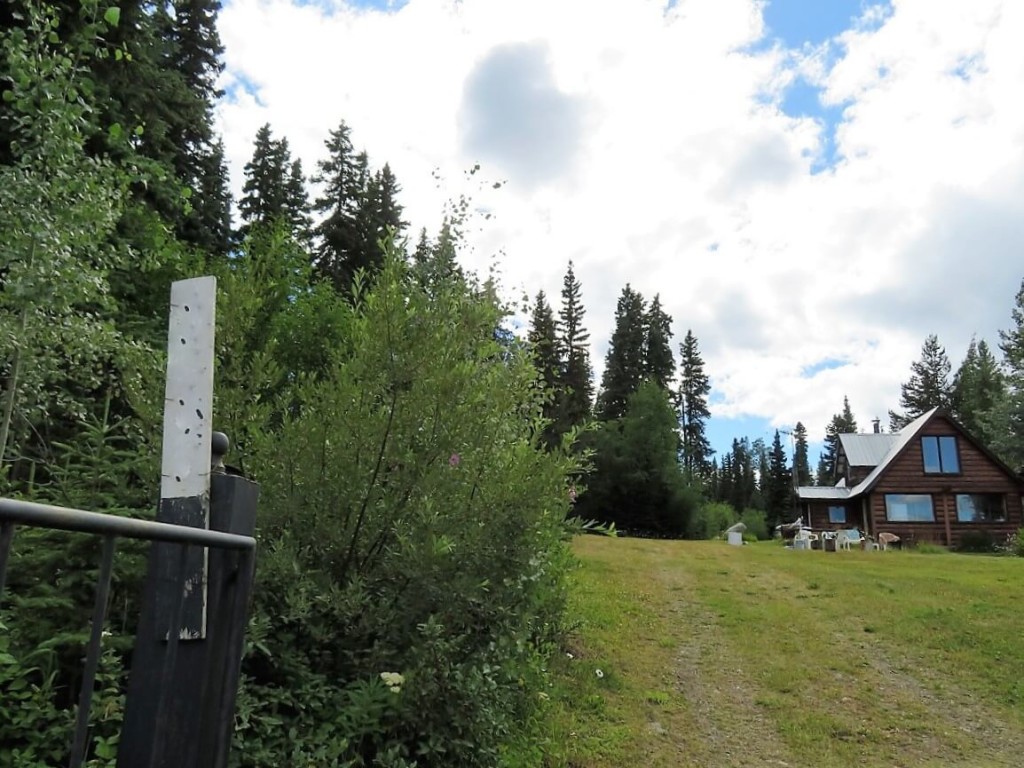 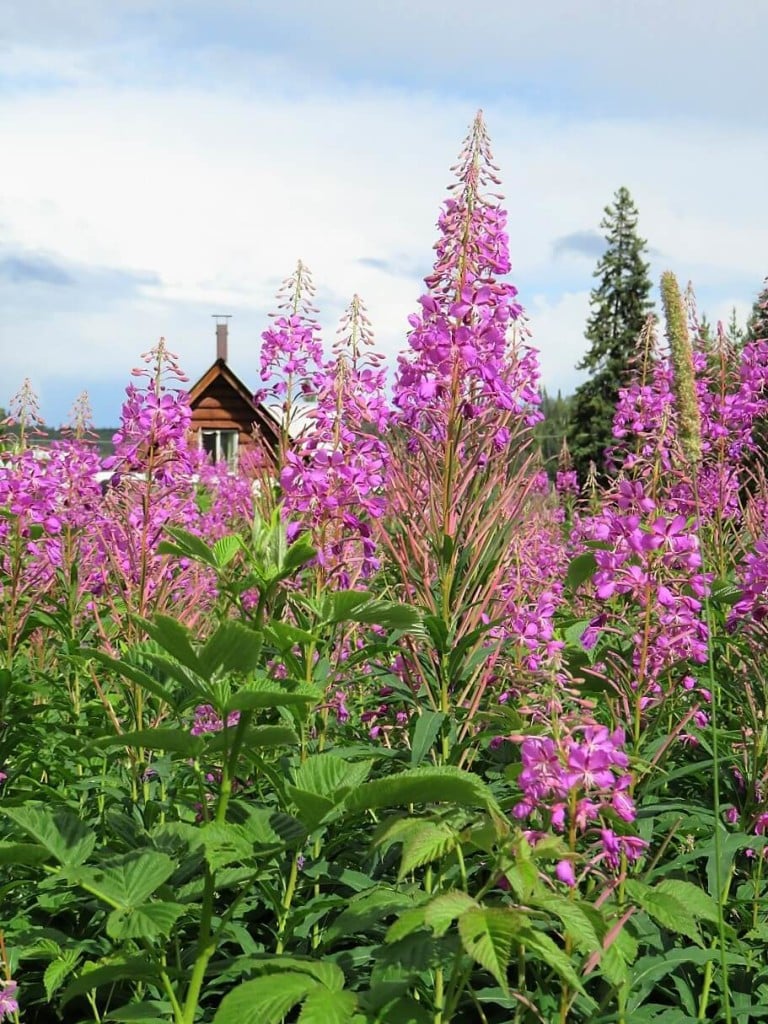 This was a bittersweet trip to our family cabin on the shores of Francois Lake in British Columbia. Wonderful to be in that familiar place, on that beautiful lake, in our cozy cabin, within hugging distance of family that I see so seldom these days. But overhung with a heavy chore . . . heavy in our hearts. We came to spread my dad's ashes at his beloved lake.

My dad passed away six years ago, just shortly after I started this blog. The hole that ripped into my heart then is still there - the edges may be a little less jagged and it may be a tiny bit smaller, but it'll always be open. It's a part of me now. 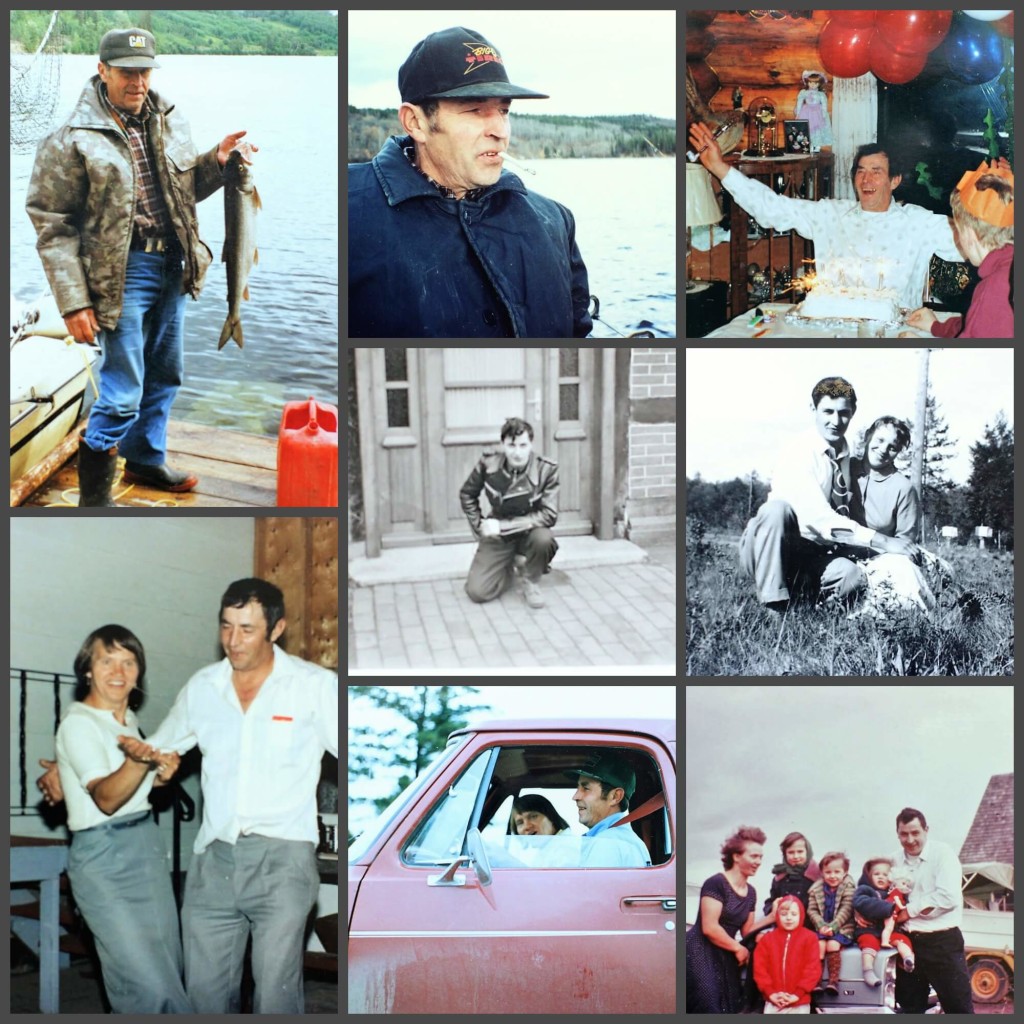 Dad was born in a German community in Russia in 1936, one of ten children in his family. Part of the many Germans displaced and expelled from Eastern Europe during WWII, he grew up fleeing, living in concentration camps, and as a refugee in Western Germany. He left school at age 14 to apprentice as a blacksmith, then emigrated to Canada with his family in 1955 at age 19.

He met my mom in English night classes for immigrants and they fell in love, getting married in the house he built for them in New Westminster, B.C. They went on to have five daughters (including me) and many adventures. My dad was a restless soul, always looking for a place to put down roots. Consequently we moved a lot between B.C. and Alberta. He worked as a metal fabricator in a sawmill at the coast, owned a blacksmith shop in northern Alberta, was a sugar beet farmer in southern Alberta, a grain farmer in northern Alberta, a commercial fisherman on Vancouver Island, and a welder/fabricator in northern B.C., with many other jobs and locations in between. I remember him pounding ploughshares on the anvil in his blacksmith shop when I was a child - I loved watching him dunk the glowing metal into a vat of water, sizzling and spitting, to harden the iron. He taught me how to drive the tractor on our farm in southern Alberta and how to ride a horse. He took me hunting with him when I was a teenager. I remember many camping trips as we were growing up. I loved taking my Nancy Drew book and making a nest out of life jackets in the bow of the boat, laying in the sunshine as the water gently lapped and rocked the boat and my dad steered and fished.

Dad lived life with gusto. He had many interests and talents. He could build anything out of metal or wood. He built river boats from patterns he drew on the back of cigarette packages. He built houses and motors and trailers. He could fashion costume parts for school plays and make kitchen tools and garden implements out of metal scraps. Dad could fix anything that was broken.

He was an avid reader, never without a book in his hand when sitting down. He loved playing cards and watching old Westerns, and was a great dancer. He and mom were a joy to watch as they twirled in elegant unison. He taught all of us girls to dance, and drive, and fish (though I haven't practiced enough to be good at it).

Dad would help out anyone who needed it. He was interested in everything, had strong opinions, and didn't suffer fools. He drank a bit too much in the early years, but quit totally in his later years. Same thing with smoking. He loved my mom and he loved us girls, but was a stern and strict father. Dad mellowed a lot as he got older, tearing up when he saw his grandchildren, telling us he loved us, and proud as punch of all of us, though still displaying flashes of his strong and irascible opinions.

Dad's main passion was fishing - he was a master. He could catch fish when and where no one else could. He was the fish whisperer. Locals around the cabin described the bay in our corner of the lake as the one where 'that guy is always out in his boat fishing'. He bought their property on Francois Lake because my mom loved eating Arctic char and this cold, deep lake was where he could find them.

So in honour of my dad, here is a recipe for fresh fried trout and garlicky potatoes - a meal he would have loved. 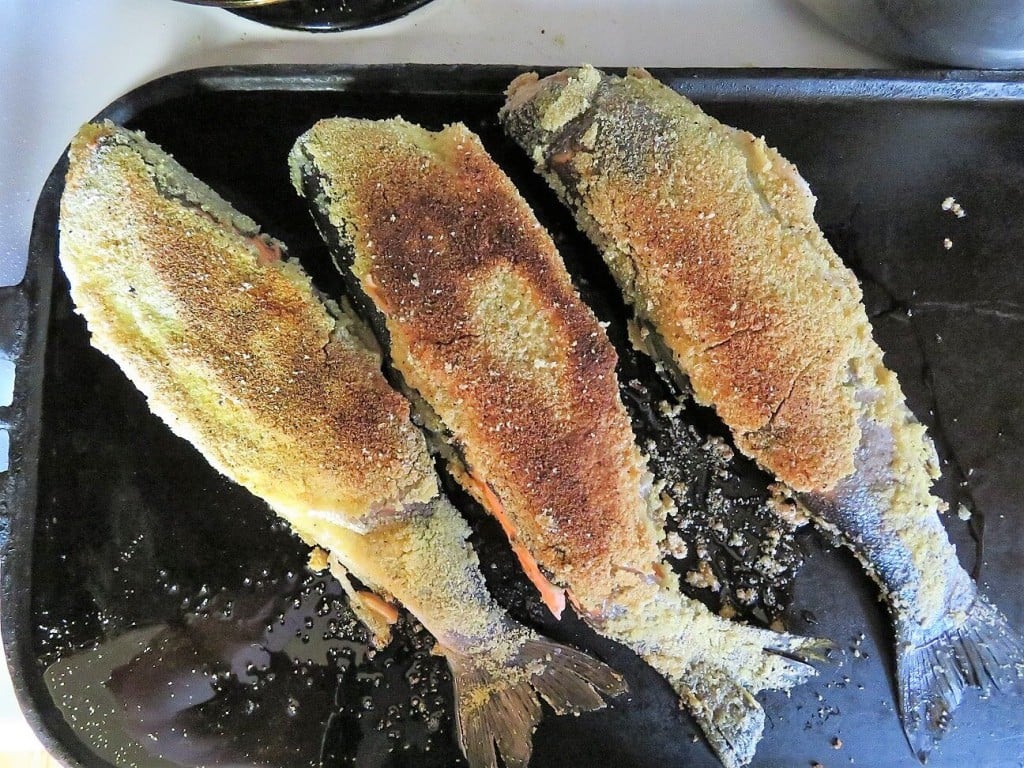 You can leave the heads on the trout, or cut them off if you wish - it may depend on the size of skillet or griddle you have.

Rinse the trout and pat them dry. Sprinkle the inside of the body cavity with salt and pepper.

Put the flour into a bowl, large plate, or small pan.  Put the eggs into a bowl or pie dish and beat them with a fork. Combine the cornmeal, salt, and pepper in a flat dish or pan.

Dip the whole fish into the cornstarch or flour, using your fingers to sprinkle it onto any parts of the outside of the fish not covered.

Then dip the fish into the beaten egg, making sure it is all moistened.

Last, dip the fish into the cornmeal, sprinkling cornmeal on any parts not covered.

Cut the lemon slices in half, and tuck four halves into the belly of each trout, if using them.

Heat a large heavy cast iron skillet or large griddle on medium heat on the stove or on a grill set over a campfire. Add the oil.

Fry the fish, turning them once the bottom side is crusty and browned and the flesh has turned opaque. Depending on the size of your fish, it should take about 4 to 6 minutes per side.

Serves 4 to 6, again, depending on the size of your fish and the size of your appetite. Small fish (about ¾ of a pound, live weight) will serve one person each. Larger fish can serve two. But when I'm out in the fresh air and hungry, I can easily eat a whole large fish myself!

Serve the Trout with these Fantastic Garlic Baked Potatoes 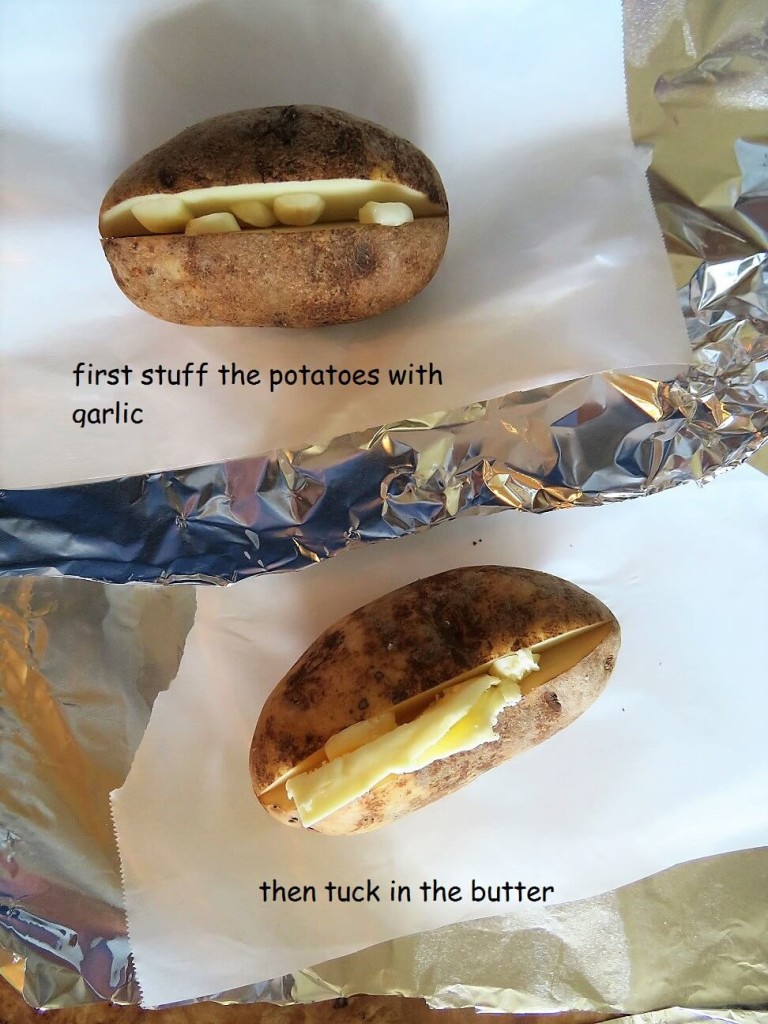 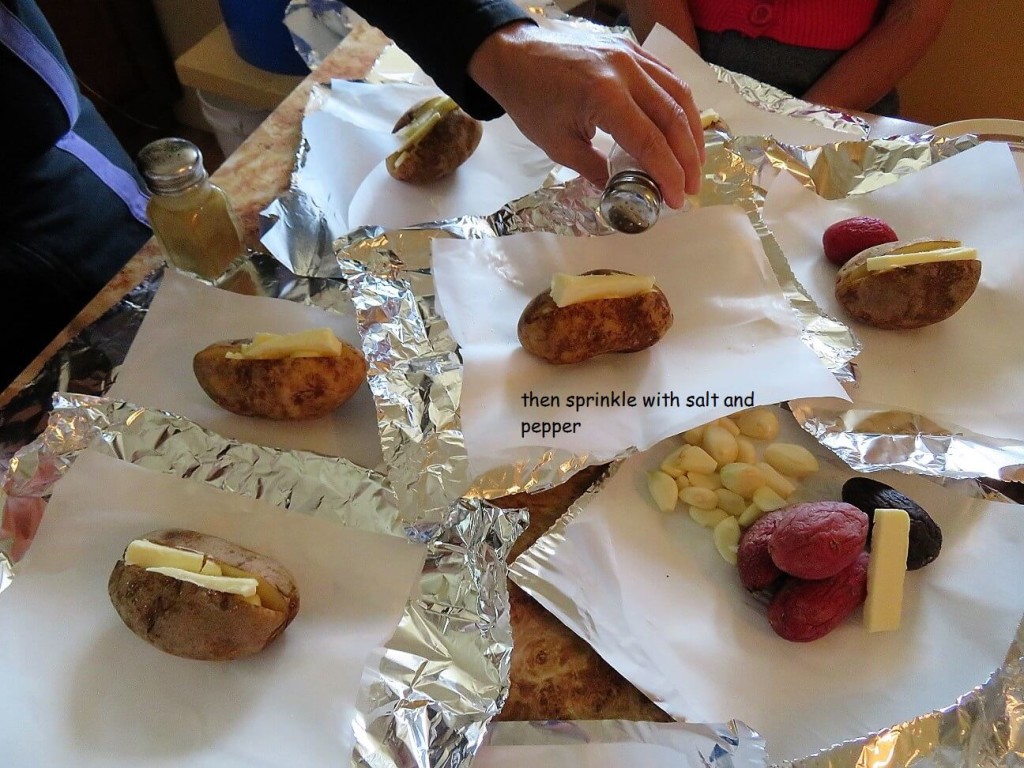 Because of the province-wide fire ban (due to the exorbitant amount of forest fires in British Columbia this year), we baked the potatoes in the woodstove in the sauna hut. Look at those beautifully glowing coals - juuuuussst right. 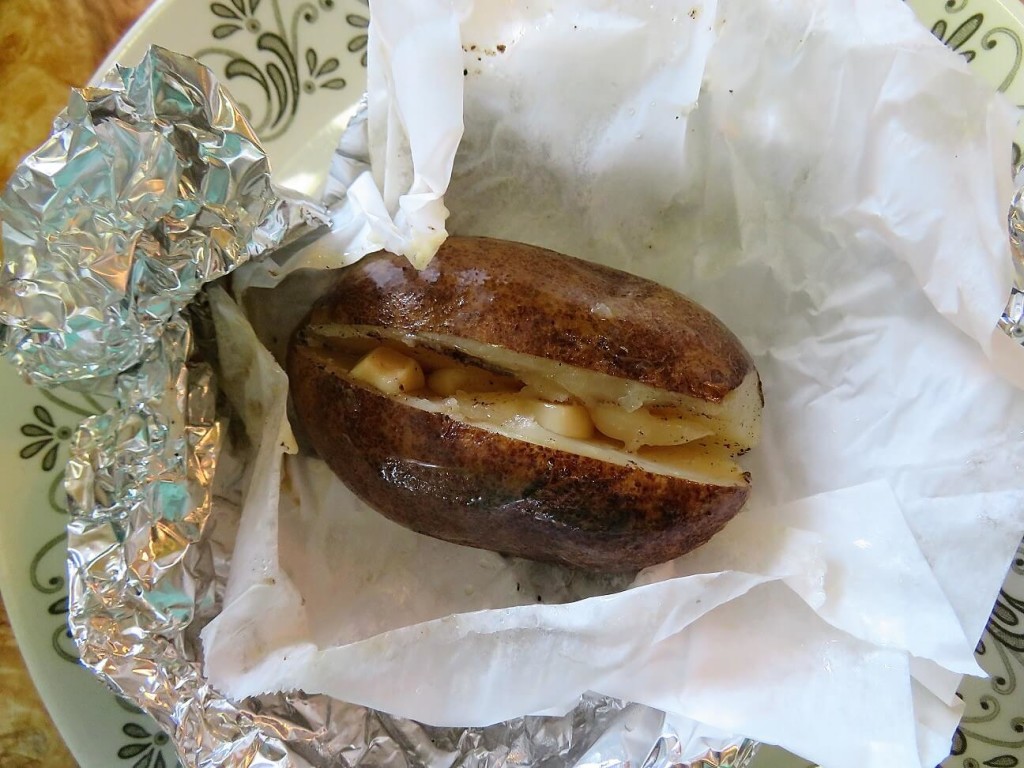 Tear or cut tin foil into squares. Line each square with a smaller square of parchment paper if desired. Wash the potatoes and pat them dry. Place a potato onto each square of tin foil.

Cut a thin wedge lengthwise out of each potato. Cut the garlic cloves into thick slices and if the butter is hard, cut it into long slivers. Stuff the slit with 3 or 4 slices of garlic cloves and fill it with slivers of butter, or if the butter is soft, spread it into the slits. Alternatively, if using oil, drizzle oil liberally over each potato. Sprinkle the potatoes with salt and pepper. Sprinkle with spices, if using them.

Pull the sides of the foil squares up around the potatoes and fold over the long edges several times. Roll up the ends and press the foil firmly up against the potatoes, molding it closely to the potato.

Place the potatoes into the hot embers of a campfire, wood cookstove, or into a hot oven (about 425°F/220°C). If you're using a campfire or wood stove, they're easier to handle if you place the potatoes in a metal barbecue basket, but you can also lay them individually directly into the coals. Bake for about 1 hour, or until the potato feels soft and gives a little when you press on it with a finger (covered in a tea towel). If your potatoes are smallish, check on them at 45 minutes.

End of Summer at the Cabin and Bannock Biscuits - 2013