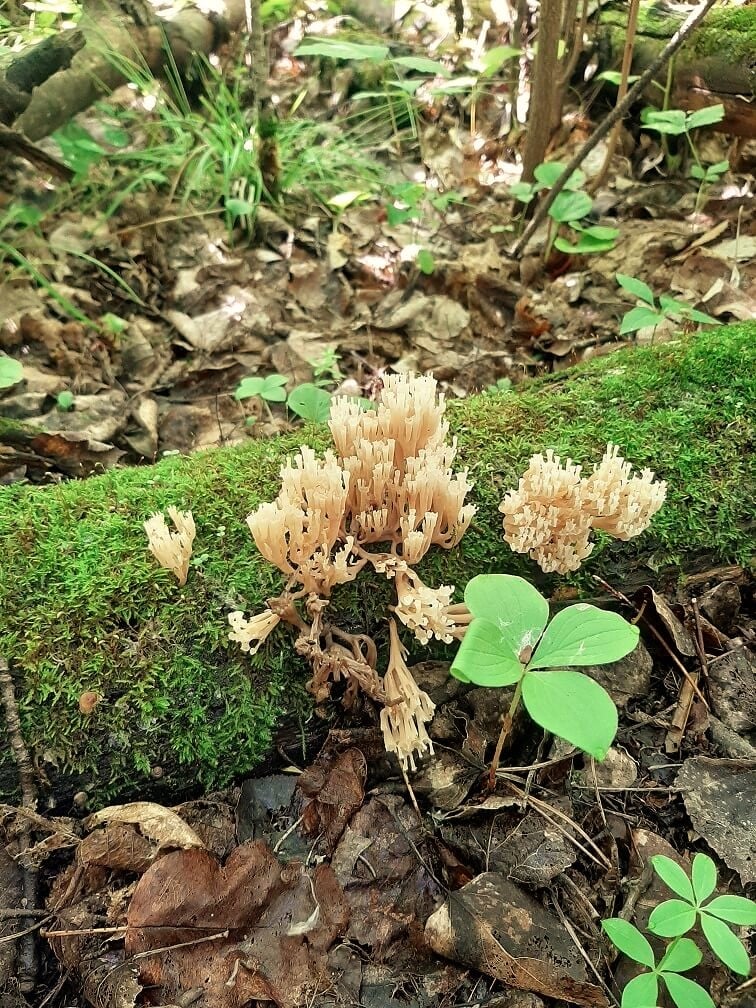 I got the call again. It was Alex, my mushroom-picking friend. Wanna come and pick some coral mushrooms with me?

What in the heck are those?

I'd never heard of them - have you?

My curiosity was piqued. I had to see what those new (to me) mushrooms were about. I pictured large, brain-wrinkly-looking pieces of coral. I donned my ratty old forest-scrounging clothes and we headed off.

Coral mushrooms grow on dead logs of deciduous trees (poplar trees in our area). They pop out in spring and early summer on logs hiding deep in shady spots; usually far into overgrown areas, requiring much ducking and scrambling and hair-caught-in-twigs to get to them. It is an adventure.

I love those kinds of adventures.

Those funny little coral mushrooms look nothing like the brains I'd imagined; instead, they are like delicately branched clumps of tiny coral twigs, bunched together like sea sponges. I would have walked by them a million times and never thought they might be edible.

The variety we found is called Crown Tipped Coral Mushrooms because the tips of each little branch have tiny prongs on them, looking like teeny little crowns. 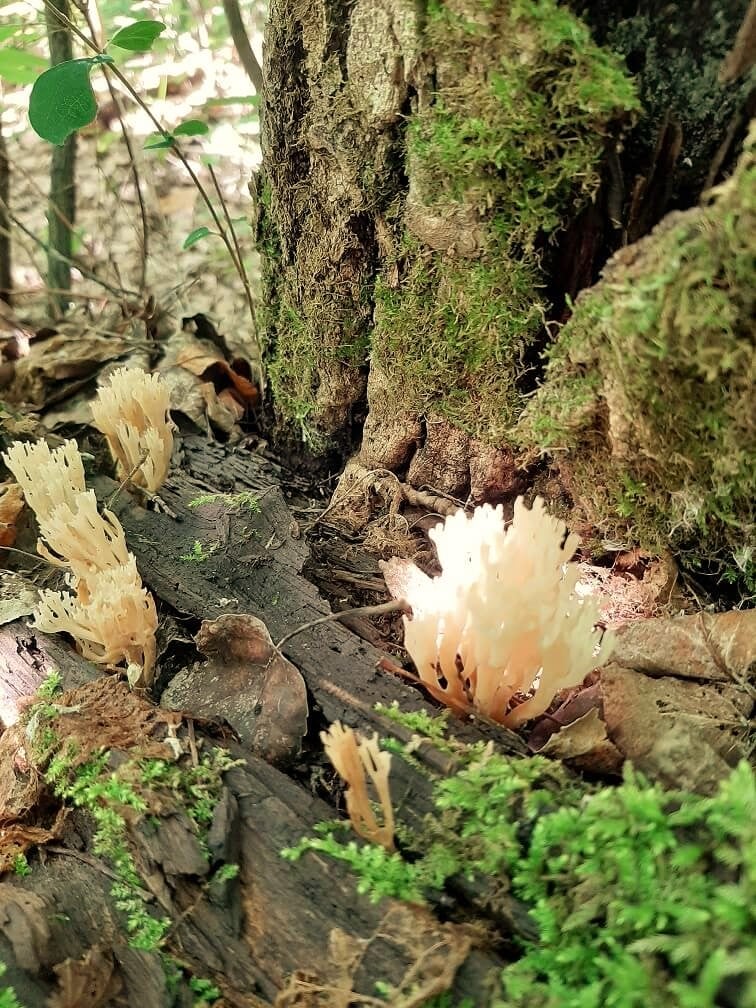 And we even found two mushrooms of a really special variety of coral mushrooms - the hericium - known as a real delicacy. Of course, we were so excited we swooped in on them and forgot to take a photo until they were in the pail.

I don't know much about mushrooms, and always trust the knowledge of my mushroom-expert friend. She knew about these mushrooms and had picked them before. Upon looking them up in her big mushroom book, we read that coral mushrooms don't have any poisonous look-alikes so I felt pretty confident in recognizing them and am excited to check for them in the forest around our place, too.

The hericium is a big, white funny-looking mushroom that really does resemble coral, and it is considered a delicious delicacy, tasting faintly of seafood. It was amazing, indeed. I sautéed it in butter with a shallot and fresh thyme and we doled it out like jewels on top of a bowl of cream soup. I imagine it would be lovely on top of an omelet or as a garnish on a pasta dish or even just on toast.

To collect the coral mushrooms we snipped them off with scissors, leaving the base still attached to the logs where we could.

Cleaning coral mushrooms is a bit fiddly - make sure to get out any bits of forest debris and trim off any tough bottoms that might still have bits of moss or the log attached.

Give them several swishes in clean water to rinse out any sandy bits, then lay them on a towel to dry, dabbing them gently from the top to get off excess moisture. The hericiums need special attention to remove the sandy bits that can get stuck in their shaggy branches. A mushroom brush or soft toothbrush are helpful. 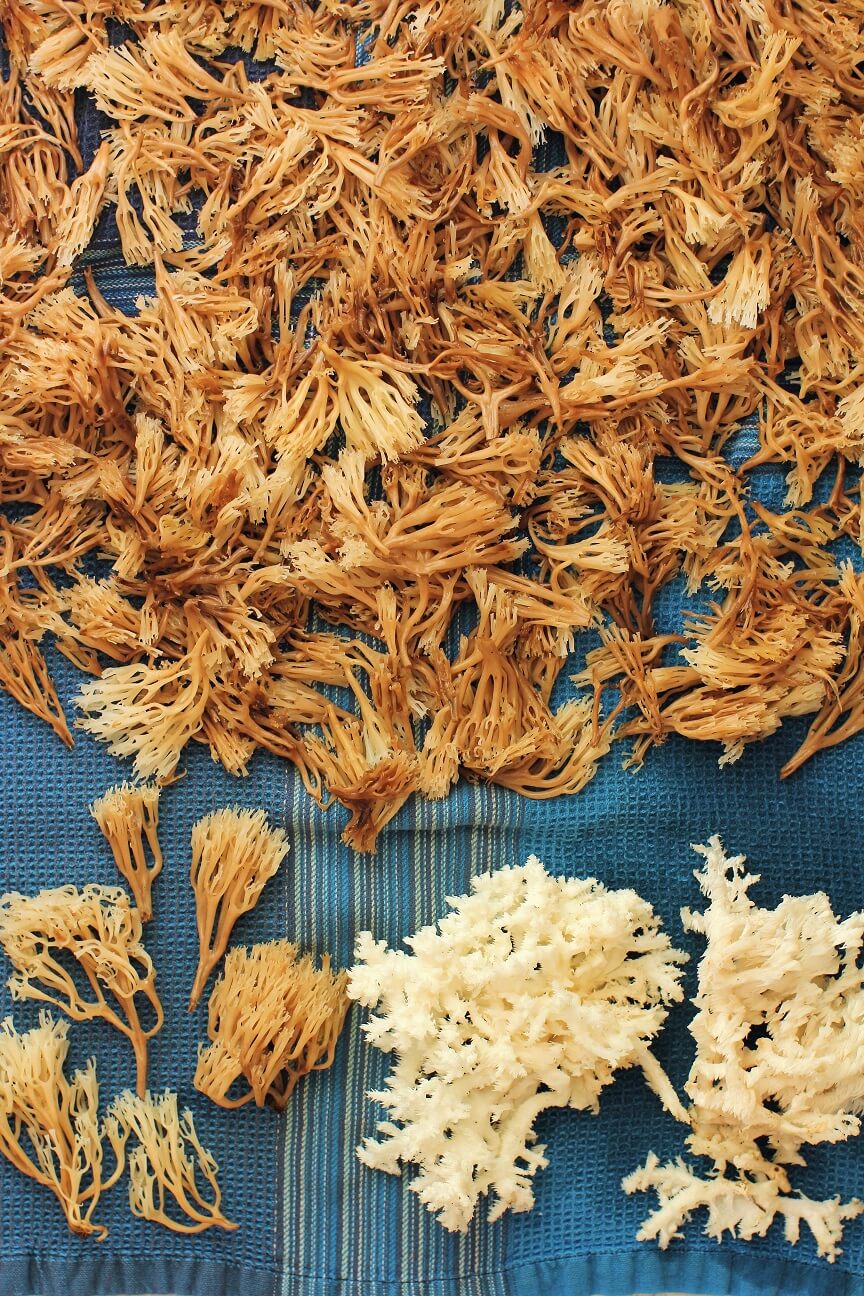 After they were cleaned I was excited to try coming up with a few coral mushroom recipes. It was a fun and delicious experiment.

The Asian-style soup was an absolute winner in our house. I wanted to showcase the mushrooms' cool shapes, so I kept them whole and just added them at the last minute - they really don't take any time to cook. This fantastic soup can be made with any other mushrooms you have (I realize coral mushrooms are a hard-to-find treat). You could even slice regular old button mushrooms very thinly and float them in the soup. It's a savoury clear broth studded with glistening black rice beads (you can substitute brown rice easily), cubes of tender egg, and pops of bright green onion. Fantastically delicate and flavourful. 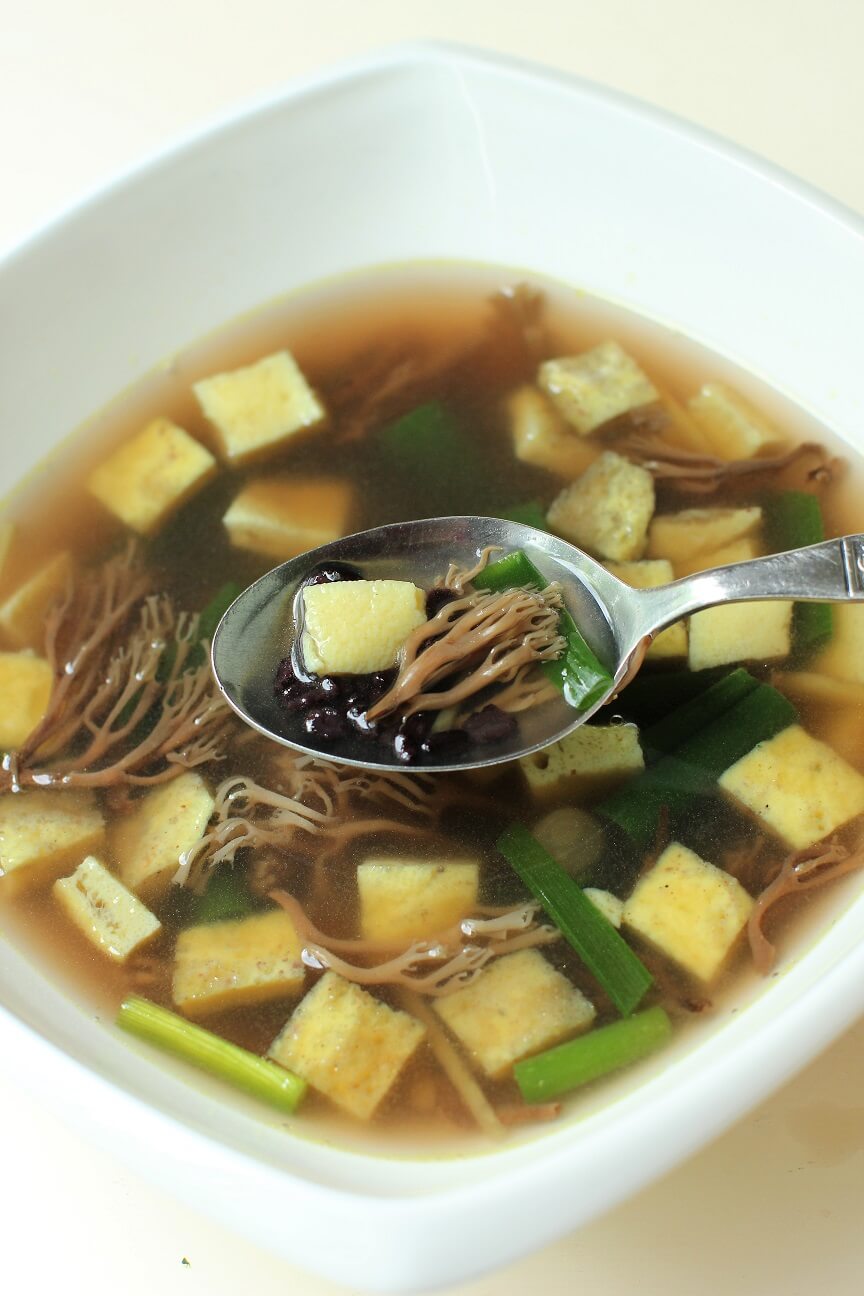 I couldn't use up all the corals we picked, so I wanted to preserve some of these unique mushrooms for future use. I canned them in a mild pickling brine - strong enough to raise the pH to a safe level for canning but not so acidic that the mushrooms became pickles. I wanted them still mild enough that I can use the mushrooms later in recipes (like making the delicious soup again), and to experiment with some new ideas. They'd also make a great garnish for all kinds of dishes. 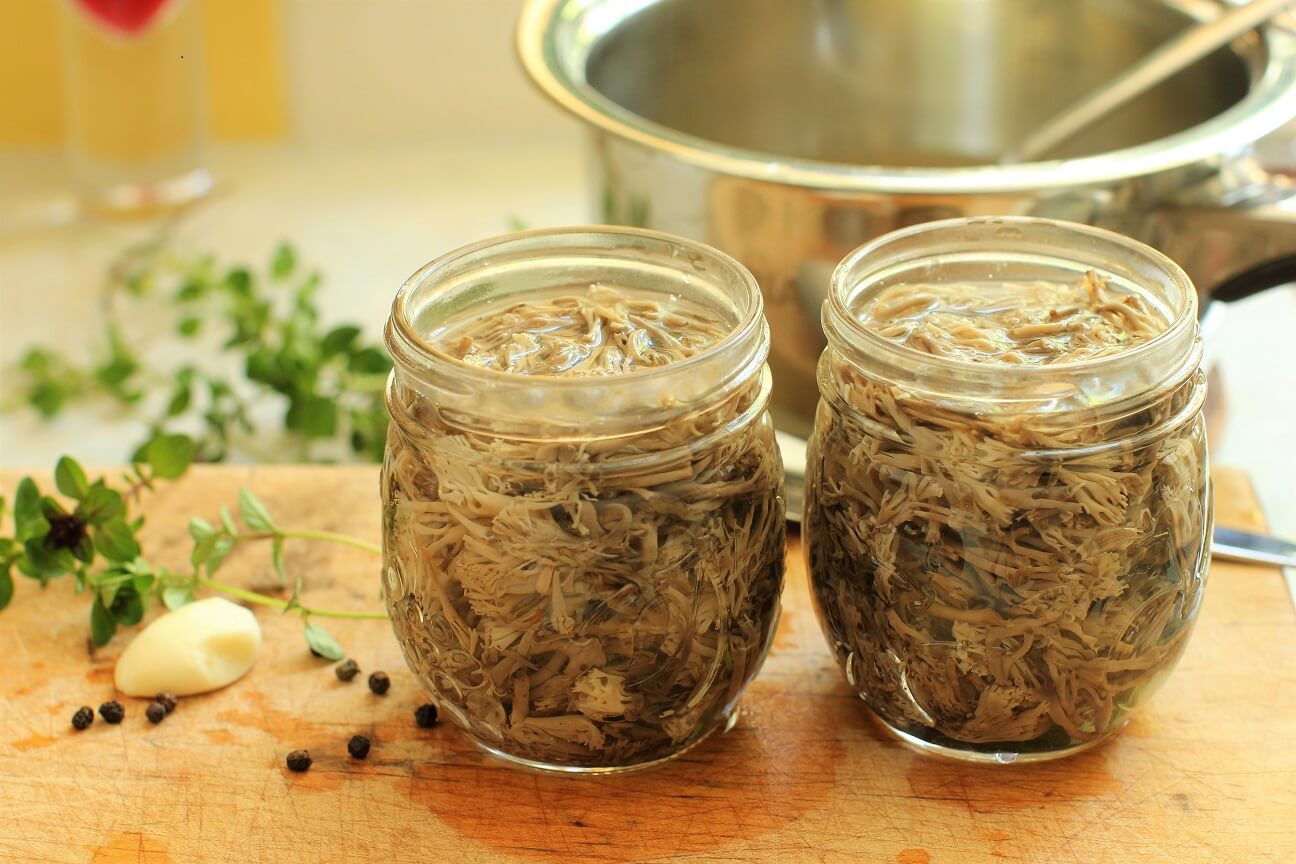 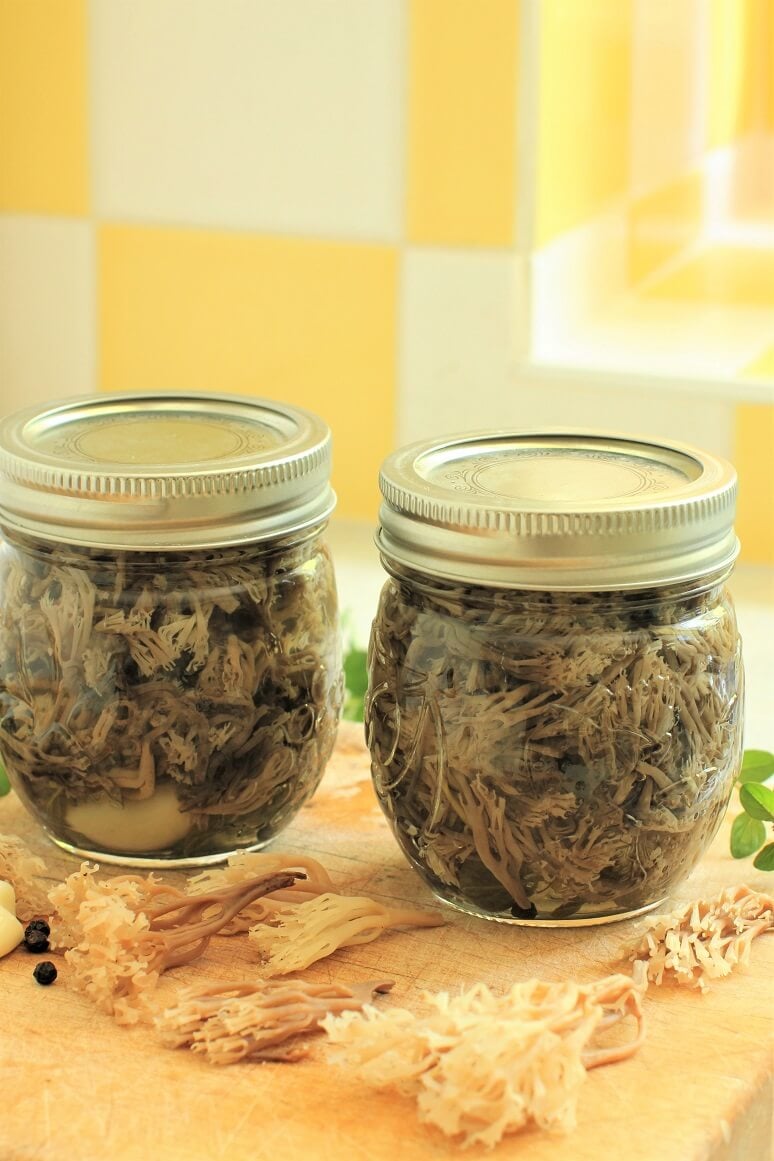 Then with those two beautiful hericiums, I just cleaned them, chopped them, and sautéed them quickly in butter with a shallot and fresh thyme. 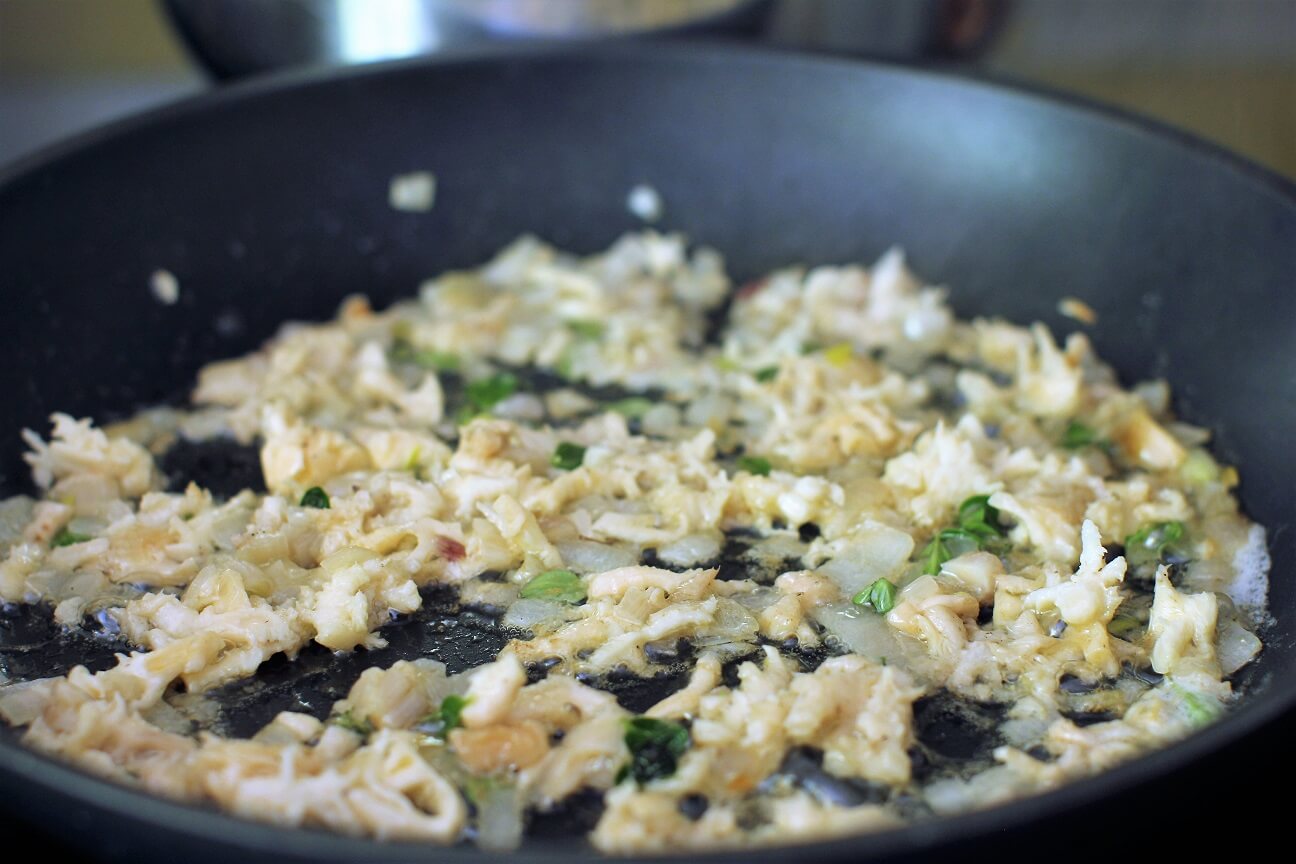 Their flavour is delicate, halfway between a fresh mushroom and sweet crab meat - a wonderful little garnish on top of a light cream soup, pasta, or toast, or an omelet. If you had a bigger amount they'd make a beautiful mushroom dish on their own, but since we only had these two hericiums, I cooked them gently and we savoured them as a garnish.

It was a treasure hunting day - a beautiful forest adventure.

Check out some of our other mushroom hunting journeys:

The Mighty Mushroom Hunters (and Some Giant Puffball Recipes)

Morel Mushroom Picking at the Cabin

Kitchen Frau Notes: Use leftover cooked black rice or brown rice, or cook some, especially for the soup. Put ¼ cup black rice + ½ cup water into a small saucepan. Bring to a boil, stir, then reduce heat to low, cover, and simmer for 25 minutes (40 minutes for brown rice). Black rice will leach its colour into the soup over time and if you reheat leftovers the next day, the broth will darken and the egg cubes will turn purple from the colour of the rice (harmless), so if you prefer your egg dice to stay light yellow, I suggest adding the cooked black rice to the soup just before serving. If you use brown rice, this won't happen, but the stunning colour of the black rice is a beautiful contrast in the soup.

Use a flavourful homemade chicken stock for this soup or a good quality concentrate (I like Better Than Bouillon paste concentrate). 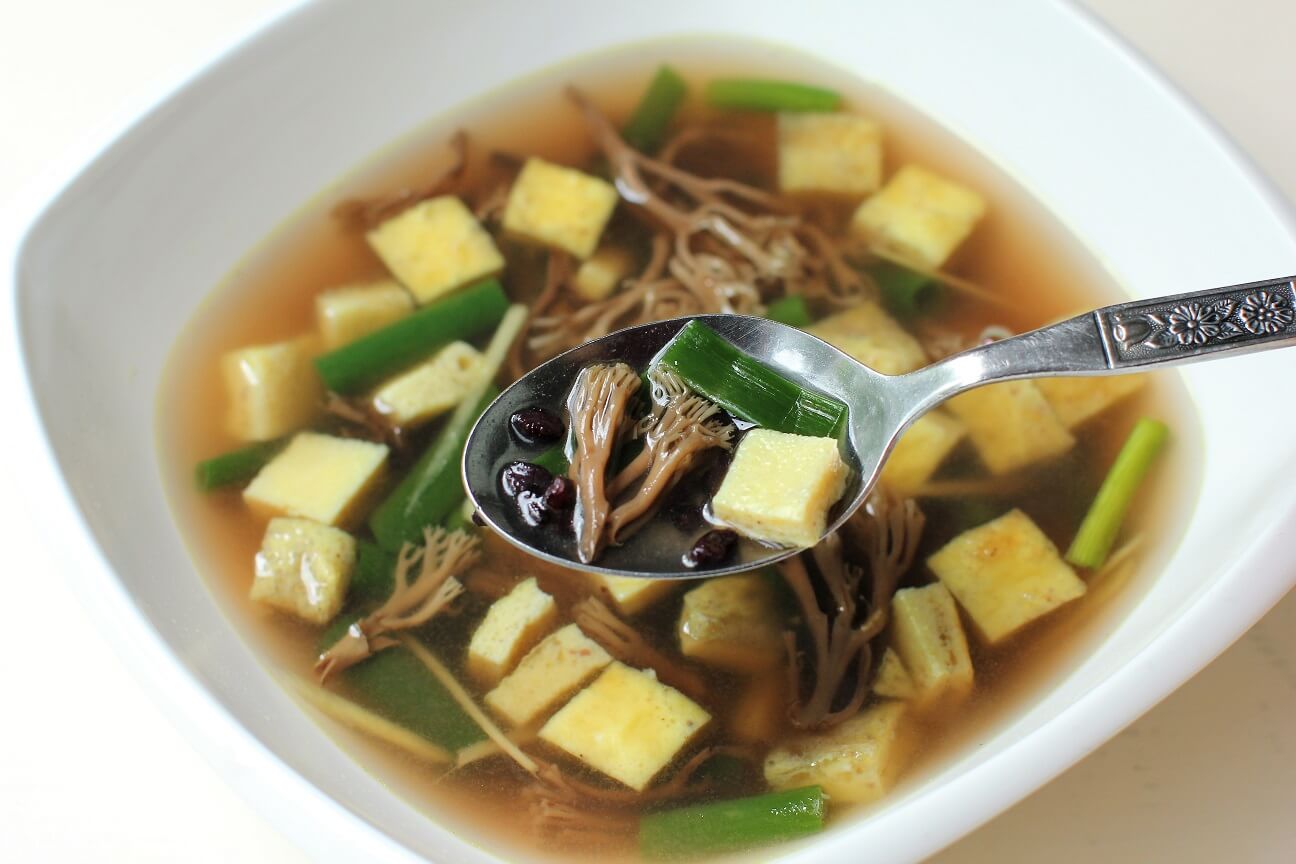 Pour the chicken stock into a large saucepan. Thinly slice the peeled ginger, stack the slices, and cut them into finely julienned slivers. Add the ginger slivers, fish sauce, tamari, and sriracha to the chicken stock and bring it to a boil. Reduce the heat, cover the saucepan, and simmer the stock for 10 minutes.

While the stock is simmering, melt the butter in a 9-inch non-stick skillet over medium-low heat. Beat the eggs with the salt and nutmeg and pour it into the pan. Let the eggs cook without stirring them, until the bottom is set but not browned. Carefully flip the egg pancake to cook the other side (but don't let it brown) or, if your pan is oven-safe, you can cook the top by setting the pan in the oven under a preheated broiler for a minute or two - just until the top is set. Tip the egg pancake out onto a cutting board and cut it into ½-inch (1cm) squares. Set them aside.

To the simmering stock, add the coral mushrooms and green onions. Bring the soup to a boil, then reduce the heat and simmer it for 1 minute. Stir in the egg cubes, cooked black rice, and sesame oil. Remove the soup from the heat and serve immediately. 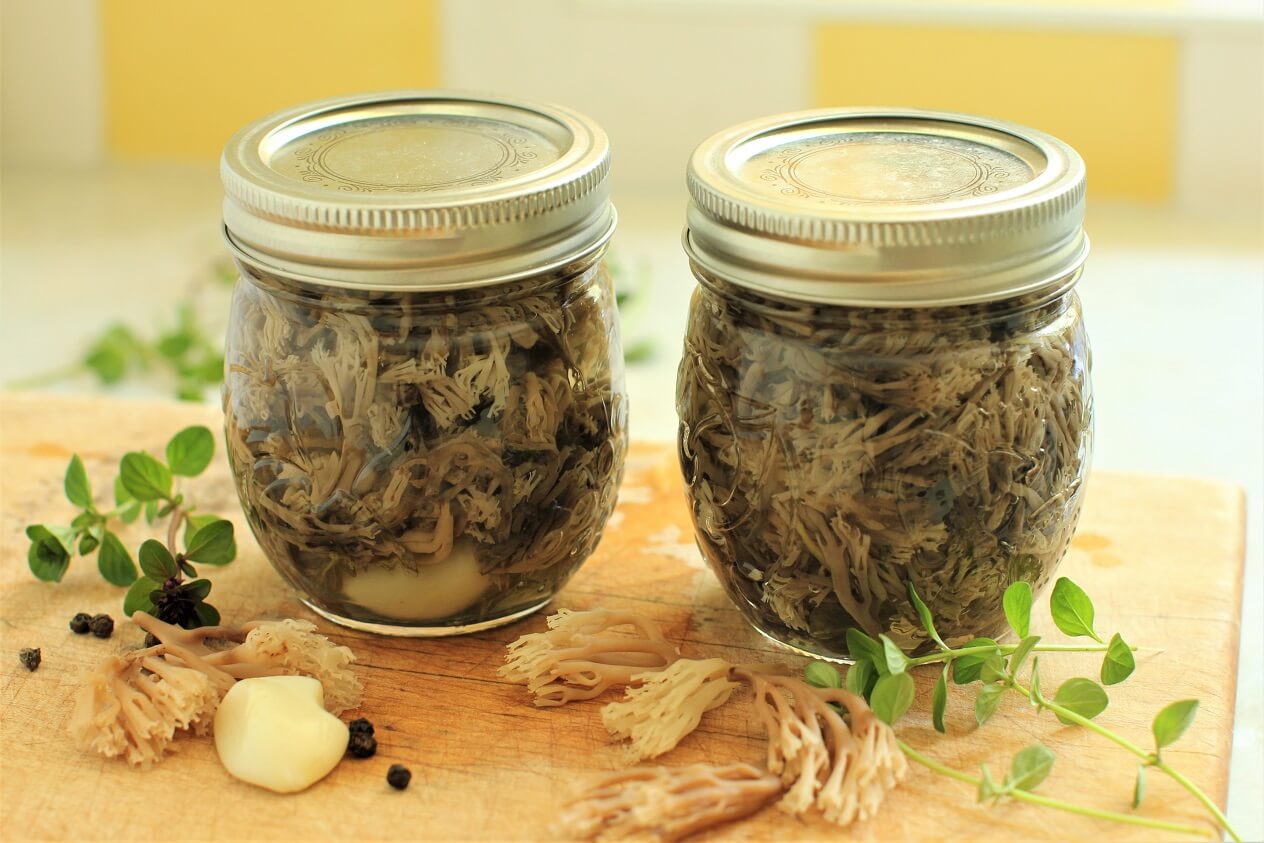 Preserve these delicate mushrooms to use in soups and recipes.

Before starting, make sure the coral mushrooms are well cleaned: rinse and swish them several times in changes of clean water to get out the little bits of forest debris caught between the strands. Snip off any brown bits or roots at the bottoms of the clusters Then drain them well and put them in a single layer onto a clean dish towel and cover with another dish towel. Press down gently to remove any excess water. To make sure they are really dry, spread the mushrooms onto another dry towel and roll them up, then leave them in the fridge for an hour or so to absorb moisture into the towel.

Sterilize the canning jars by boiling them, covered in water, for 5 minutes. Heat the metal snap lids in simmering water.

Heat the water, vinegar, and salt to boiling in a small saucepan. Add the coral mushrooms and bring the brine back to a boil. The mushrooms will shrink down a lot. Remove the saucepan from the heat.

Remove the hot jars from the boiling water, drain them, and into the bottom of each put 1 clove of garlic, 6 peppercorns, and a sprig of fresh thyme.

Scoop the hot mushrooms out of the brine with a slotted spoon and divide them evenly between the two jars. Pour the remaining brine over the mushrooms in the jars until they are filled to within ½ inch from the top. Wipe the rims of the jars clean, put on the metal snap lids, and screw bands, sealing them only finger tight.

Spread a clean dishcloth into a large saucepan that's at least 2 inches taller than the jars. Put the jars into the pot, not touching each other, on top of the dishcloth (to keep them from bouncing around as the water boils). Fill the pot with hot water to cover the jars.

Bring to a boil, then reduce the heat a bit to keep the water at a medium boil. Cover the pot and let the jars boil for 10 minutes. Remove them to a dish towel on the counter to cool. Once they are cool, and you can see the lids have sucked down onto the jars (you should have heard a pop as they sealed and the lid should not be bowed upwards), the jars can be stored in a cool place for up to 1 year. If a jar doesn't seal, keep it in the fridge and use it within 2 weeks.

Use as a garnish or in soups, stews, or stir fries (adding near the end of cooking time). 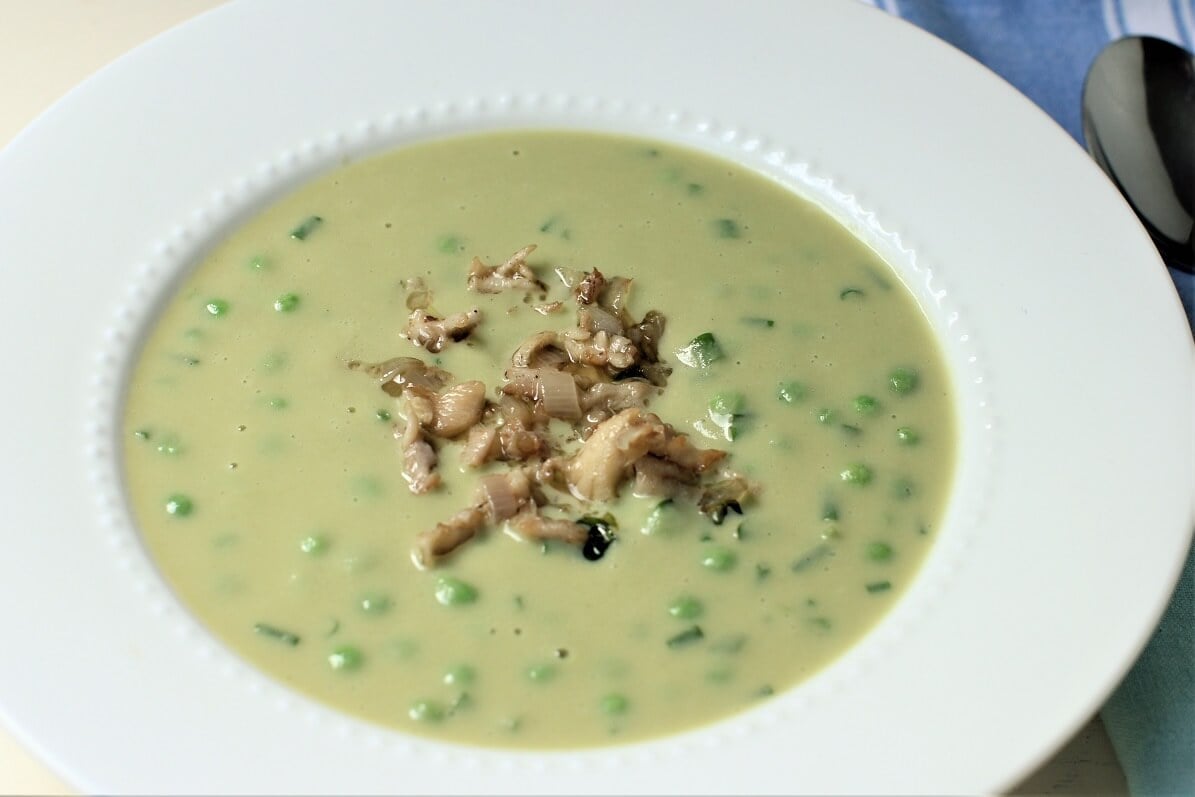 Make sure the hericium coral mushroom is well cleaned and rinsed.

Serve as a garnish on top of cream soups, (the mushroom/seafood flavour complements many varieties of cream soups), on toast, omelets, pasta, or scrambled eggs

Serves 4 as a garnish. 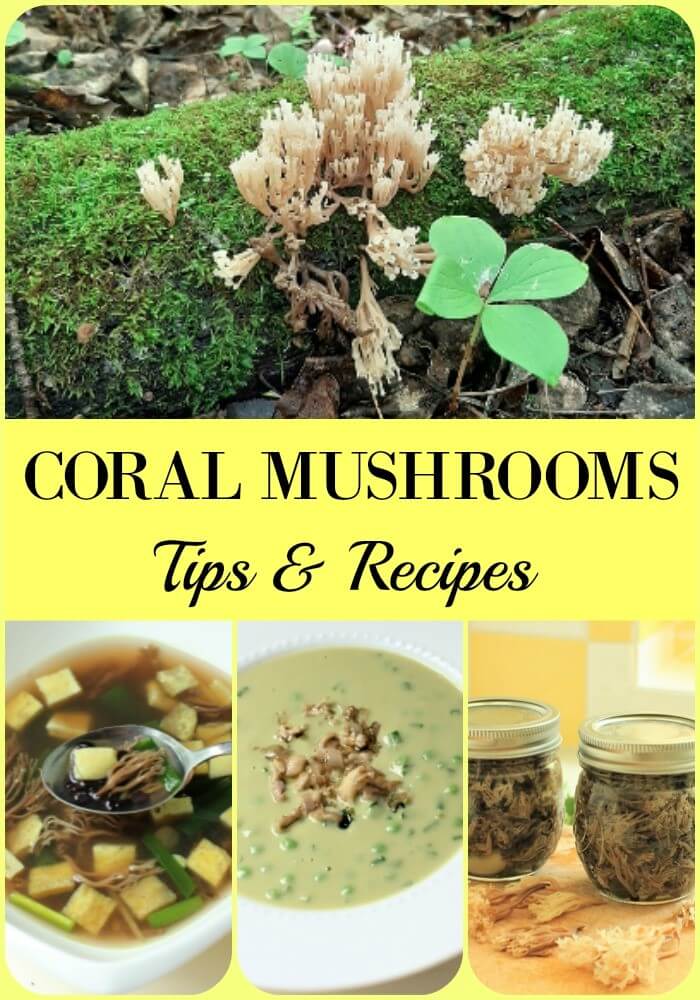 Steak and Mushrooms - a Classic