Gooey, crunchy, nutty, and deliciously chewy, this Caramel Popcorn Cake is a quick and easy way to get a decadent cake onto your table. It’ll be sure to wow guests both young and old alike – and it’s gluten free, too! (Skip to recipe.) 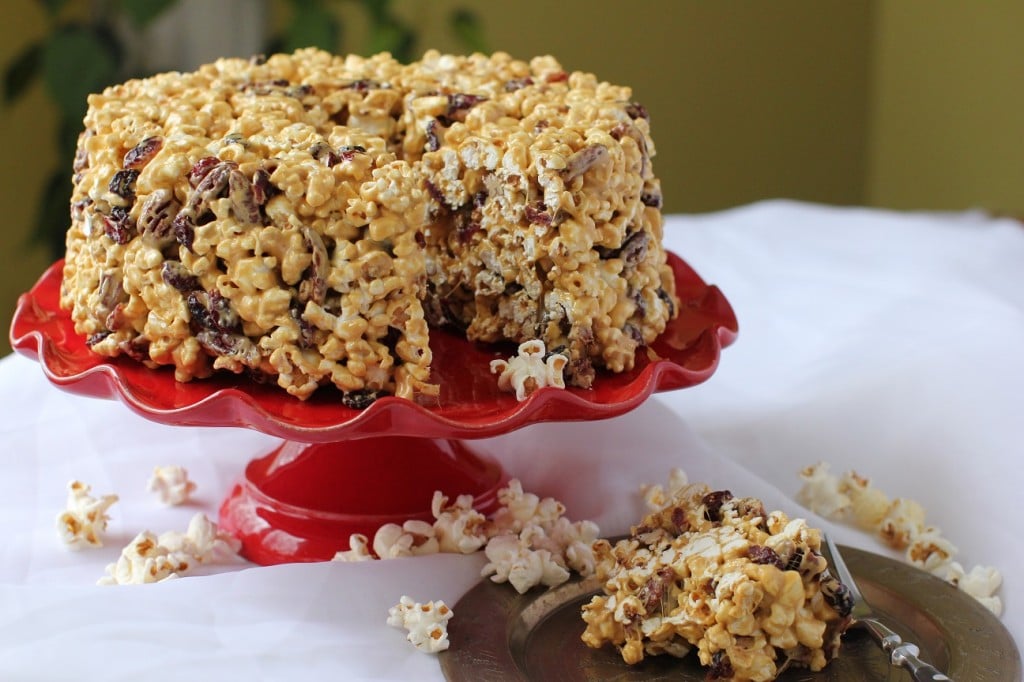 Last week was Meredith‘s birthday. She turned eight. In addition to cooking and getting creative in the kitchen, Meredith loves playing with Lego, spelling big hard words, Ukrainian dancing, and wrestling with her brothers.

To celebrate her birthday, we made a popcorn cake . . . a most delicious and simple way to celebrate any occasion.

And a whole lot of fun to make, too! 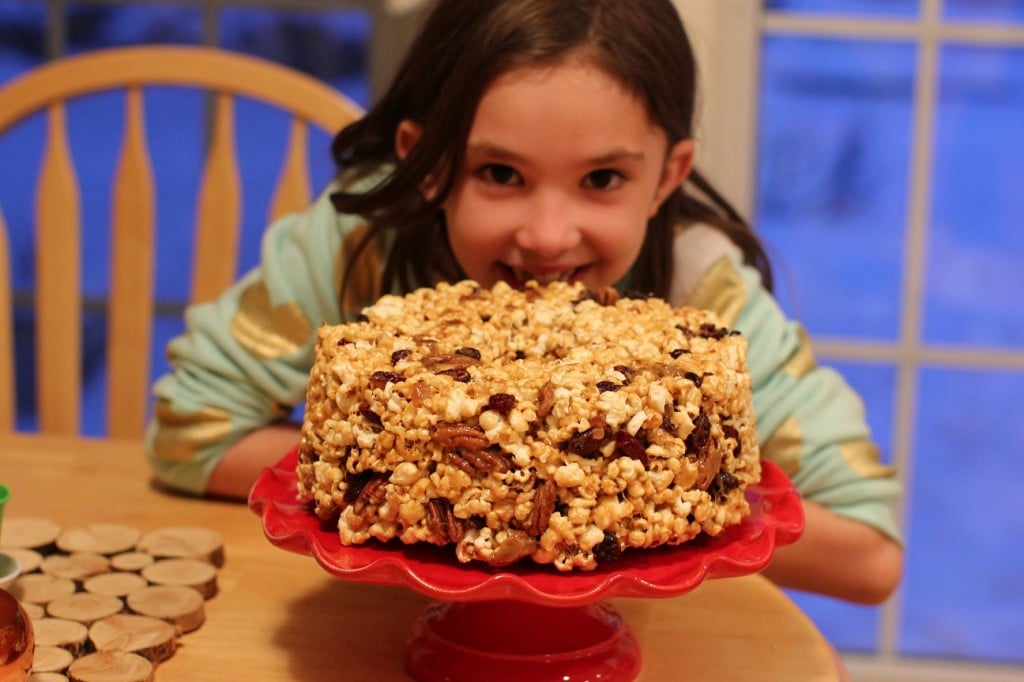 This popcorn cake recipe is based on the simple butter and melted marshmallow base used for rice krispie squares, but we used coconut oil and added molasses to give it a lovely caramel flavour and colour. The molasses keeps the cake soft and a bit ‘gooey’ – just what a birthday cake should be! The pecans and dried cranberries add a nuttiness and tang that take this simple cake into the realm of ‘Wow!’ 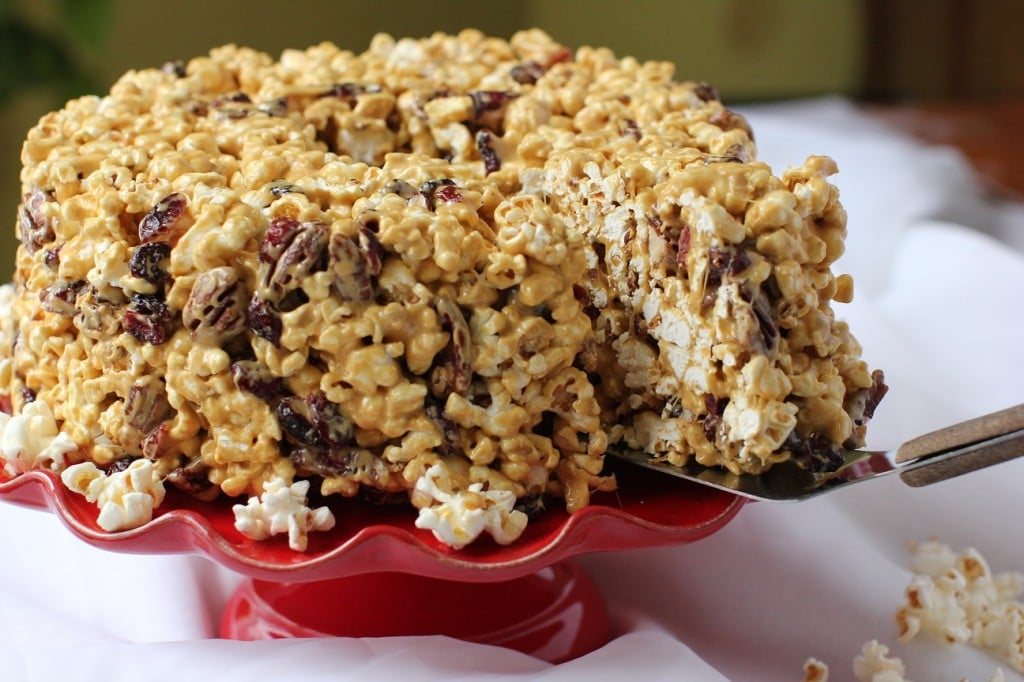 I think I’m going to make one for my next grown-up gathering, too!

Tip: To measure molasses, lightly spray the measuring cup or spoon with cooking oil spray or wipe it with a thin film of coconut oil or butter and the molasses will slide right out. 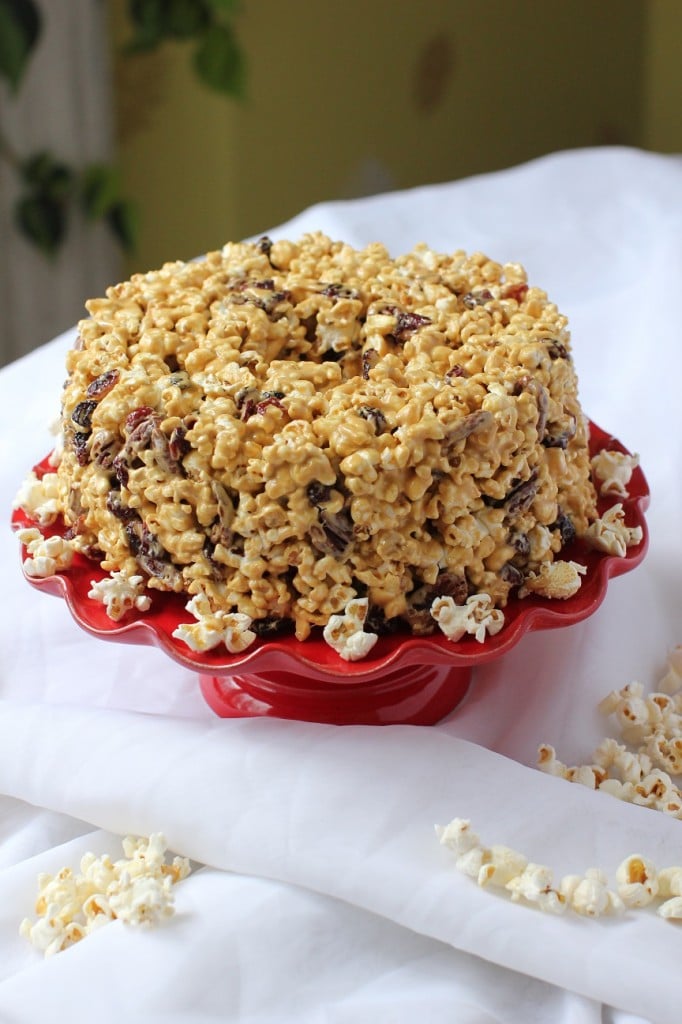 Preheat the oven to 350°F. Toast the pecans on a cookie sheet in the oven for 10 minutes. Let them cool.

Then, pop the popcorn kernels. In a stovetop popcorn popper or a large pot with a handle and lid, melt the coconut oil over medium-high heat. If you don’t have a big enough pot, make the popcorn in two batches.

Once the oil is rippling a little bit in the pot, pour in the popcorn kernels. Put the lid on the pot and as soon as you hear the first kernels pop, start shaking the pot back and forth on the burner, holding the lid down with one hand and a pot holder and shaking with the other hand and a pot holder. If you don’t shake the pot, the popcorn kernels will burn. If you need a break from shaking, lift the pot up for a few seconds so it is held just a half inch (one centimetre) from the burner, then put it back on the burner and keep shaking. If using a stovetop popper you can just hold the pot handle with one hand and turn the stirring crank with the other. 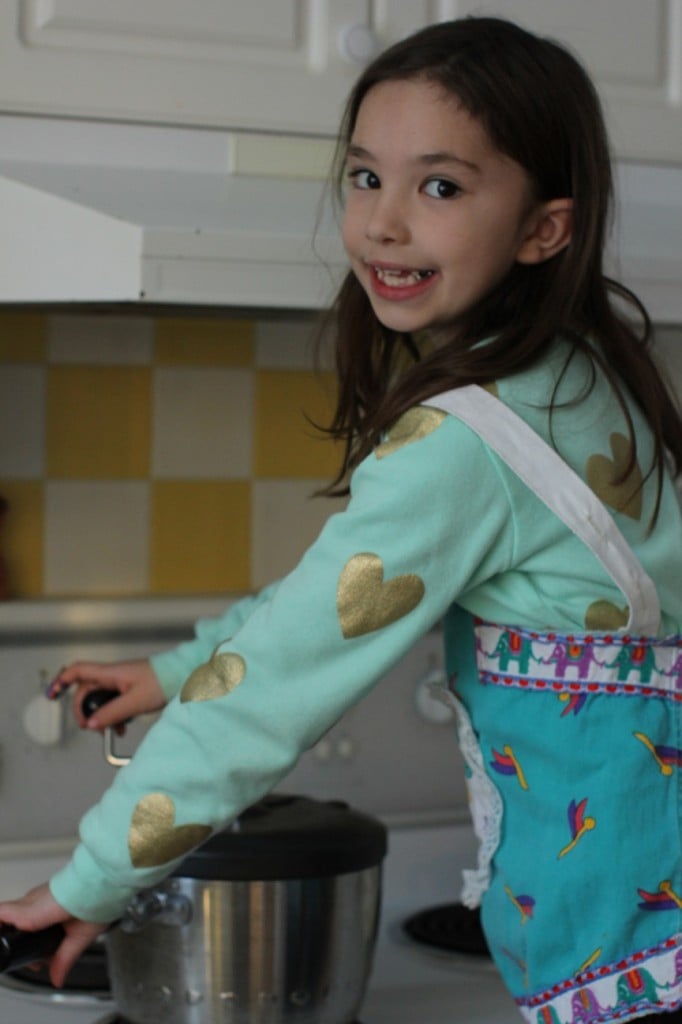 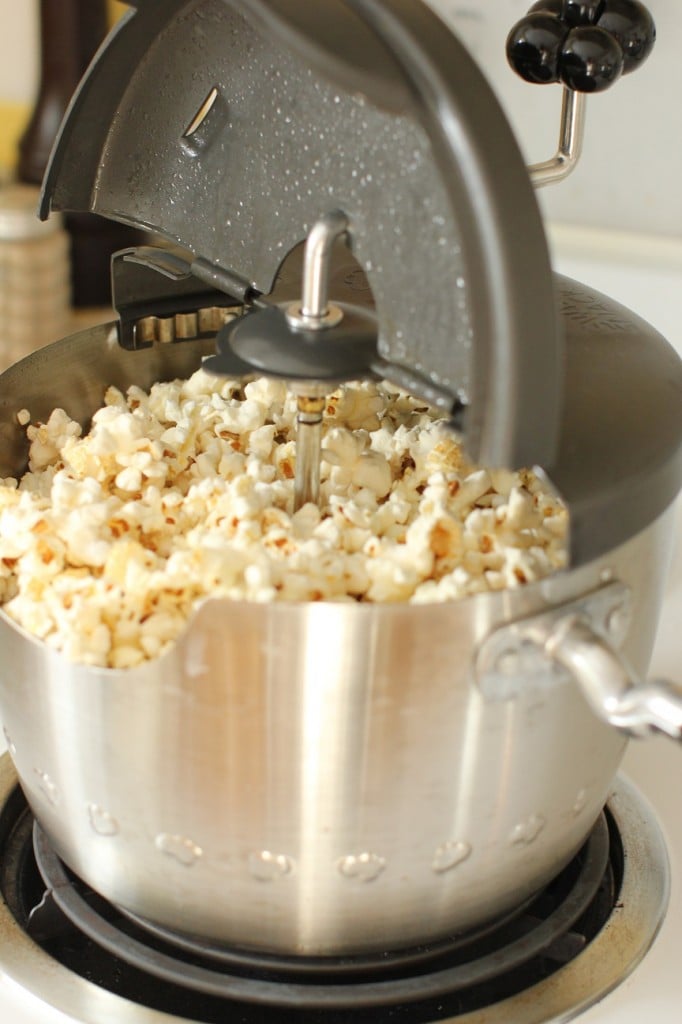 Keep shaking or stirring the pot until the popping slows down and you hear only the occasional pop. Remove the pot from the burner and leave the lid on until you don’t hear any more pops.

Measure 14 cups of the popcorn kernels into the largest bowl you have (or a big roasting pan). Try not to get any unpopped kernels into the bowl. You get to nibble on any popcorn left over.

Add the toasted pecans and the dried cranberries to the bowl. 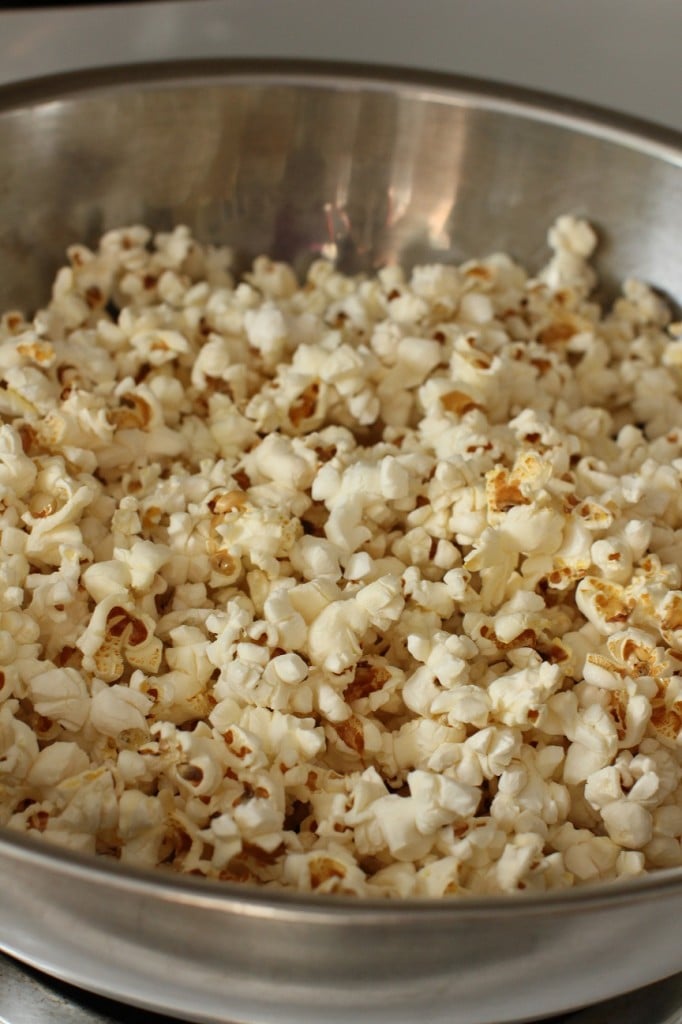 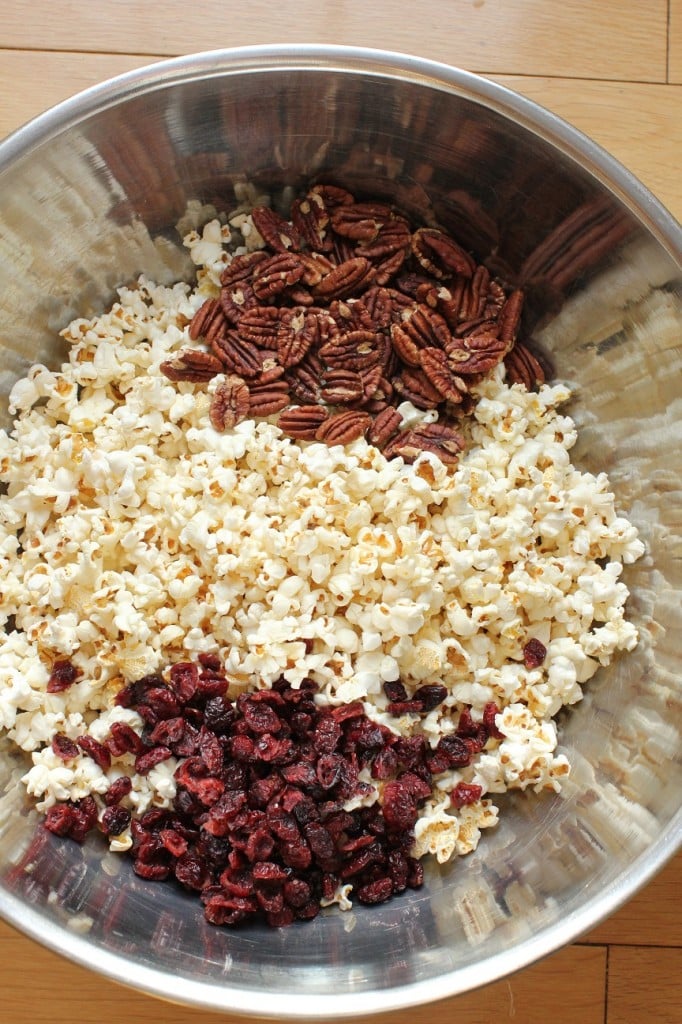 In a large saucepan on the stove, melt the coconut oil or butter over medium heat. Add the marshmallows, molasses, and salt. 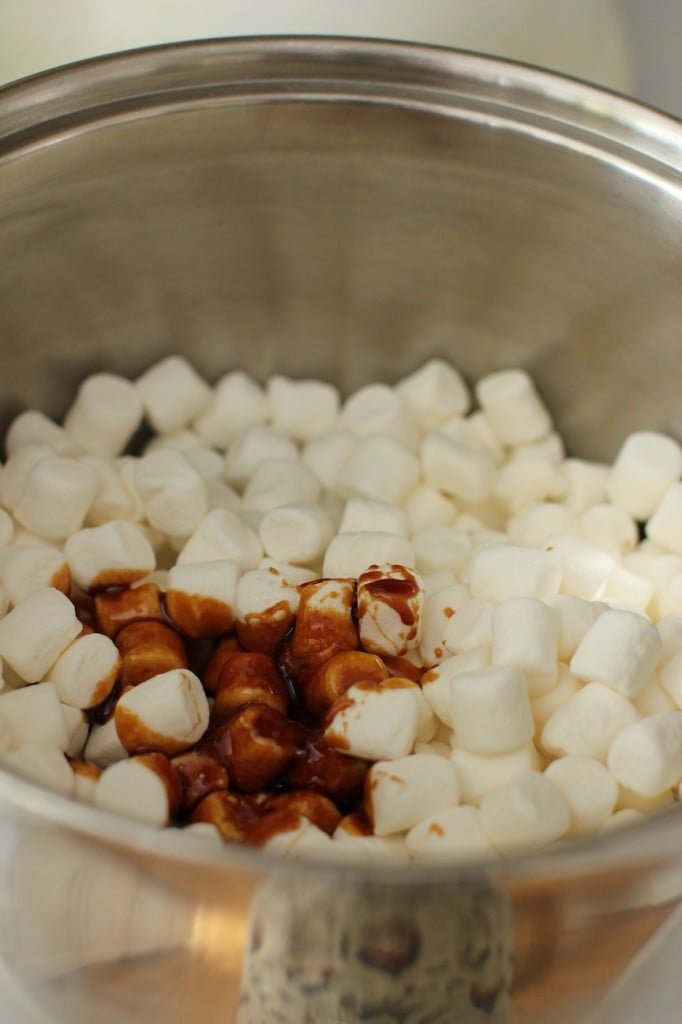 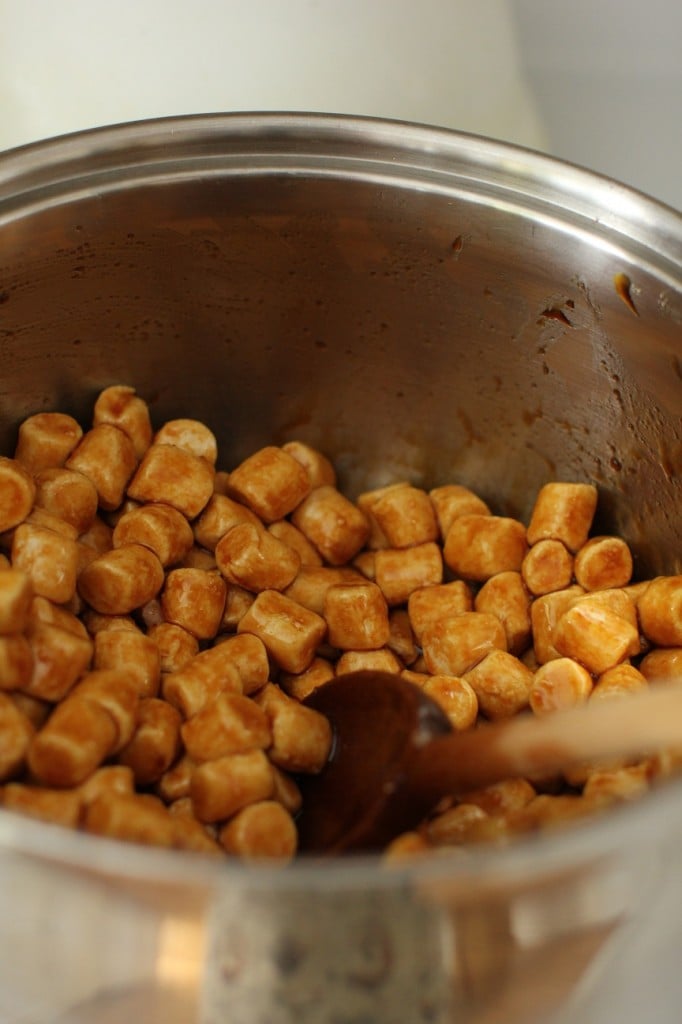 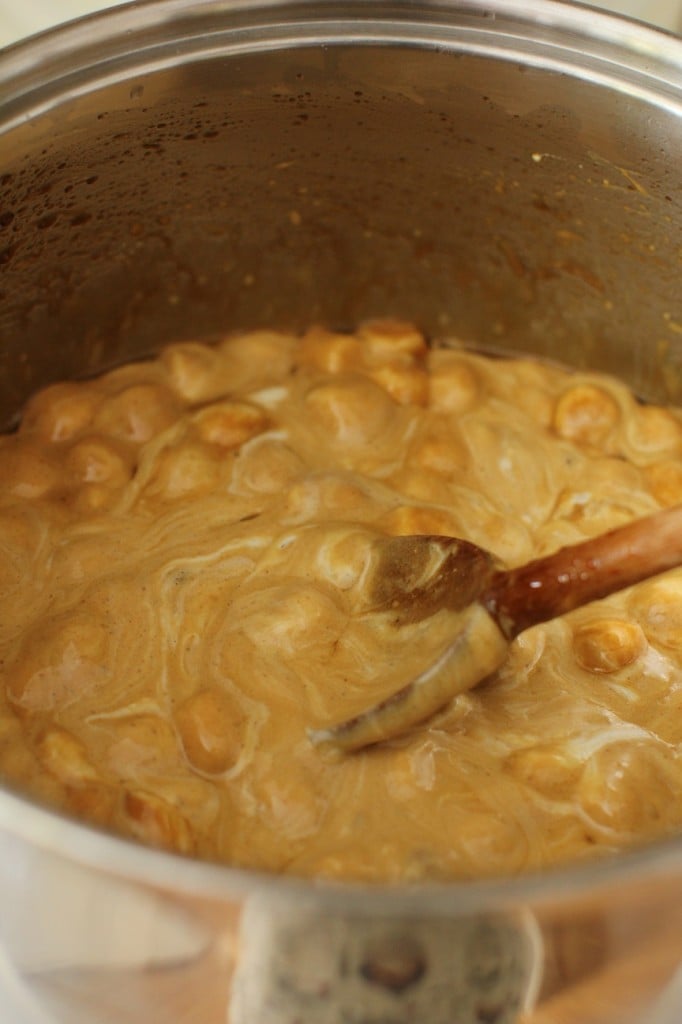 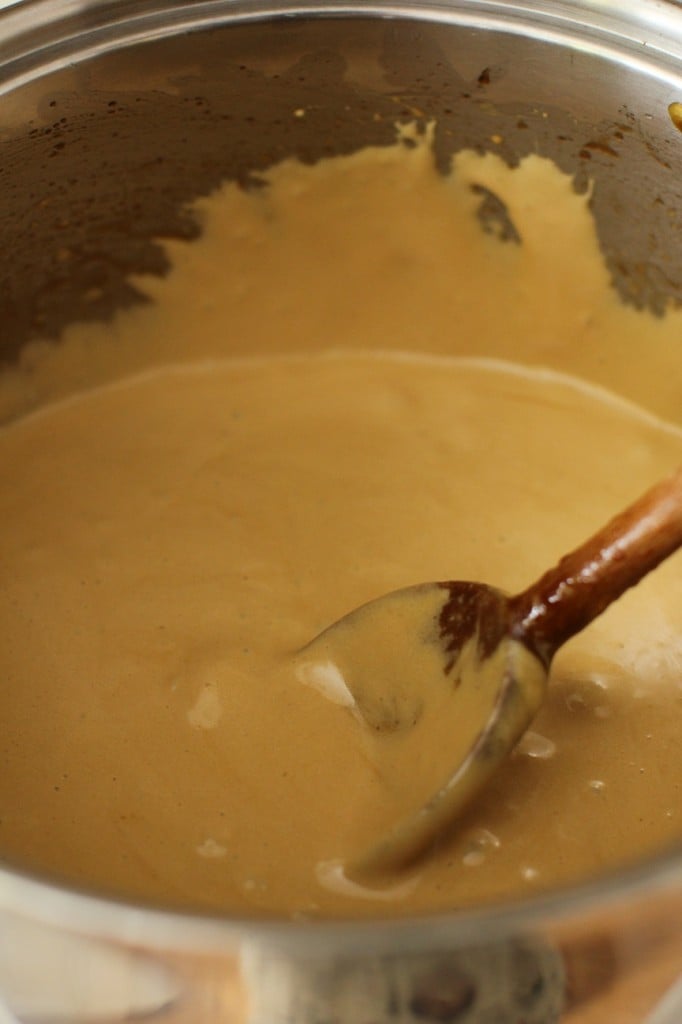 Stir until the marshmallows are completely melted and the the mixture is smooth. You will have to stir it hard at the end to make sure all the melted coconut oil is mixed in. 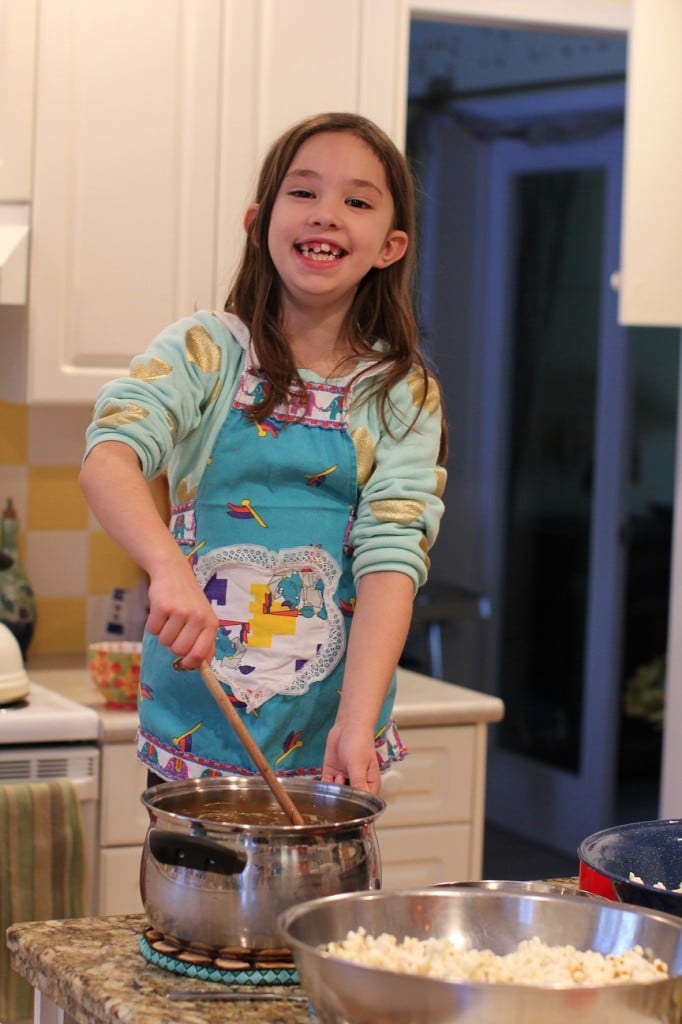 oaky, ready to pour it quickly into the bowl of popcorn

Now you need to WORK QUICKLY to mix everything before the mixture cools. (It is handy to have two people to do this – one to pour the mixture out of the pot and hold it over the bowl while the other one scrapes the pot.) 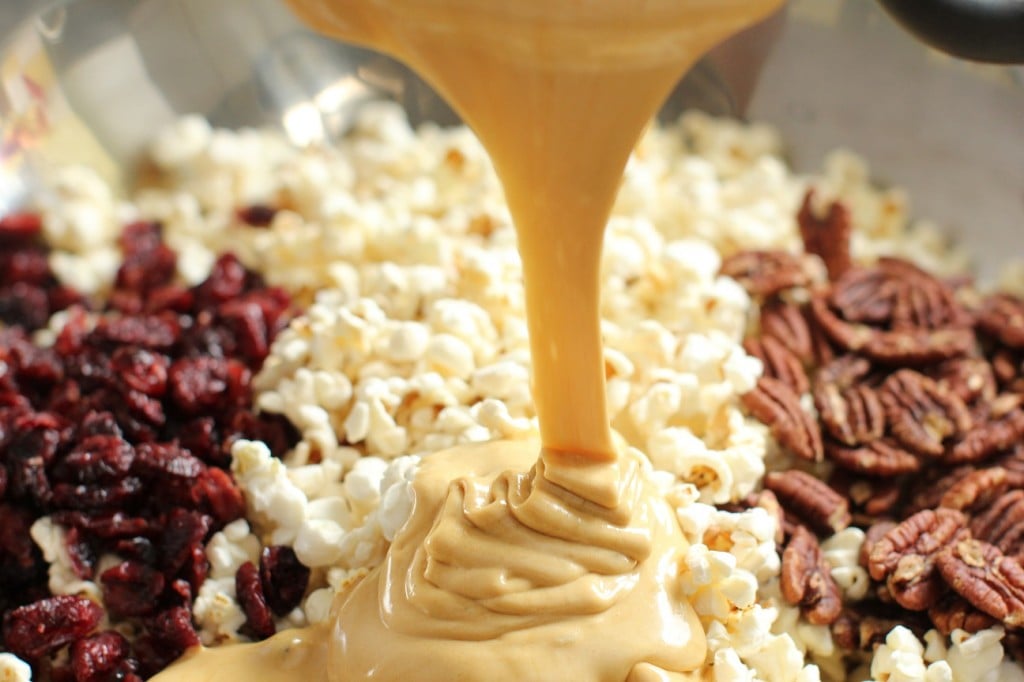 look at that luscious coating 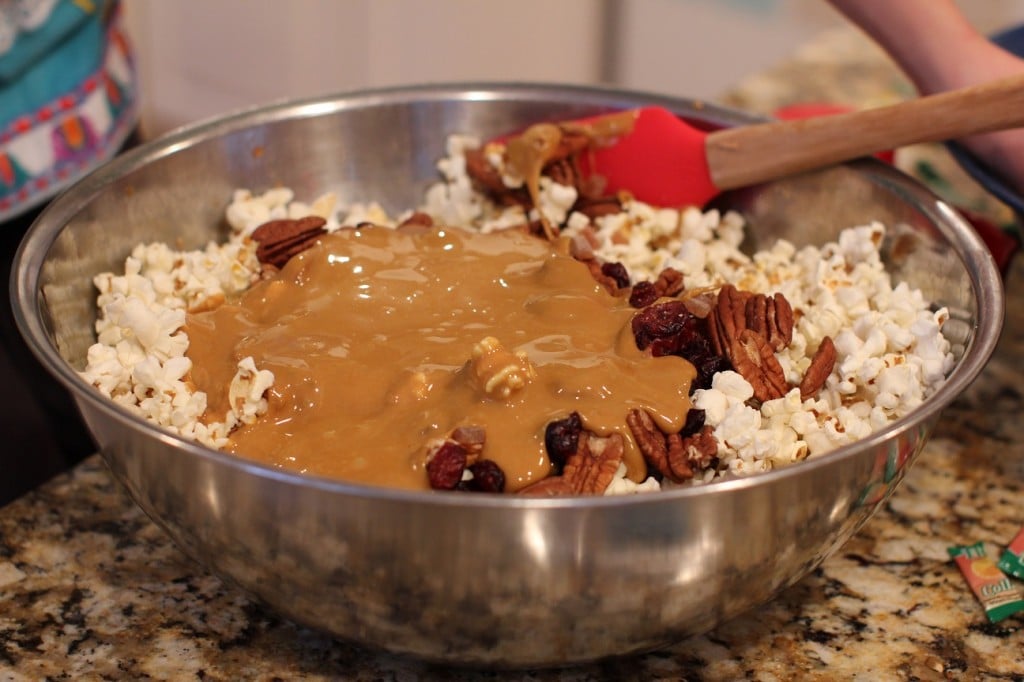 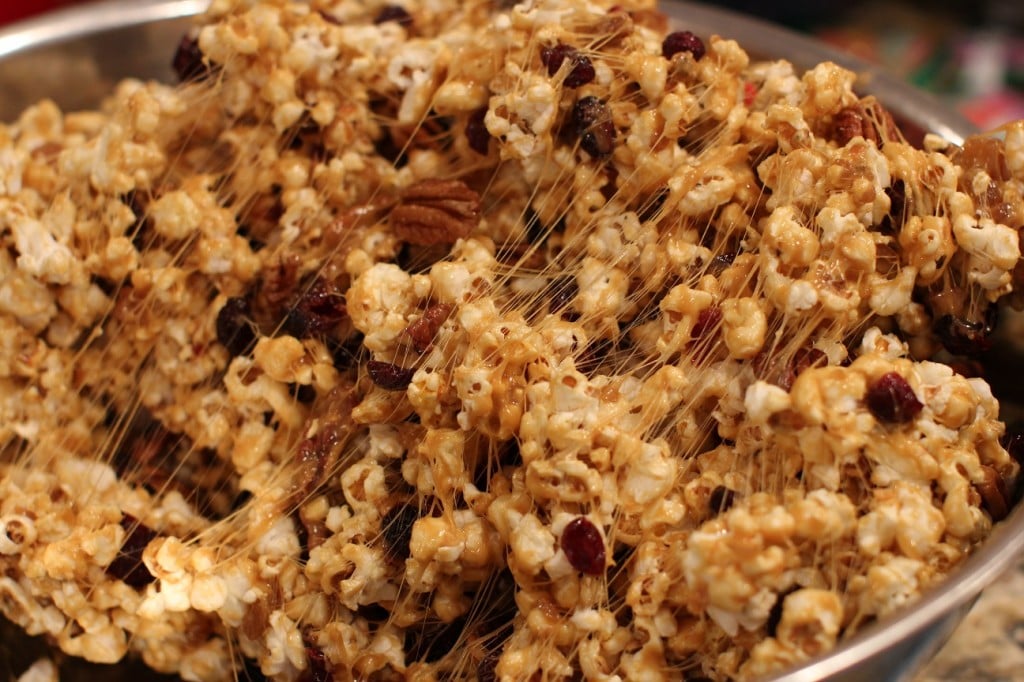 as you stir, you get lots of cool, spiderwebby strings!

Quickly dump the mixture into the greased pan and scrape in the bits of popcorn sticking to the bowl. Grease your palms by rubbing them with a bit of coconut oil or butter, or by spraying them with cooking oil spray. Use your greased palms to press the popcorn down into the pan a bit and to smooth the top. 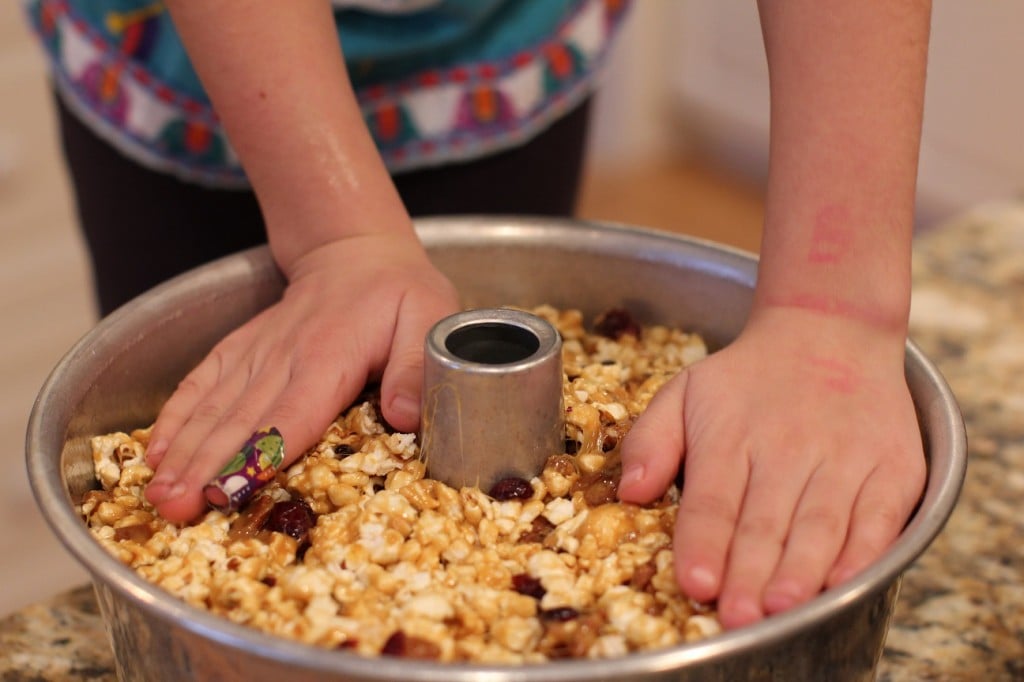 press down, but not too hard

Put into the fridge to cool and harden for about 1 hour. Then turn the cake over and use a butter knife to loosen it onto a plate, or cut it into squares if you made it in the 9×13″ pan. 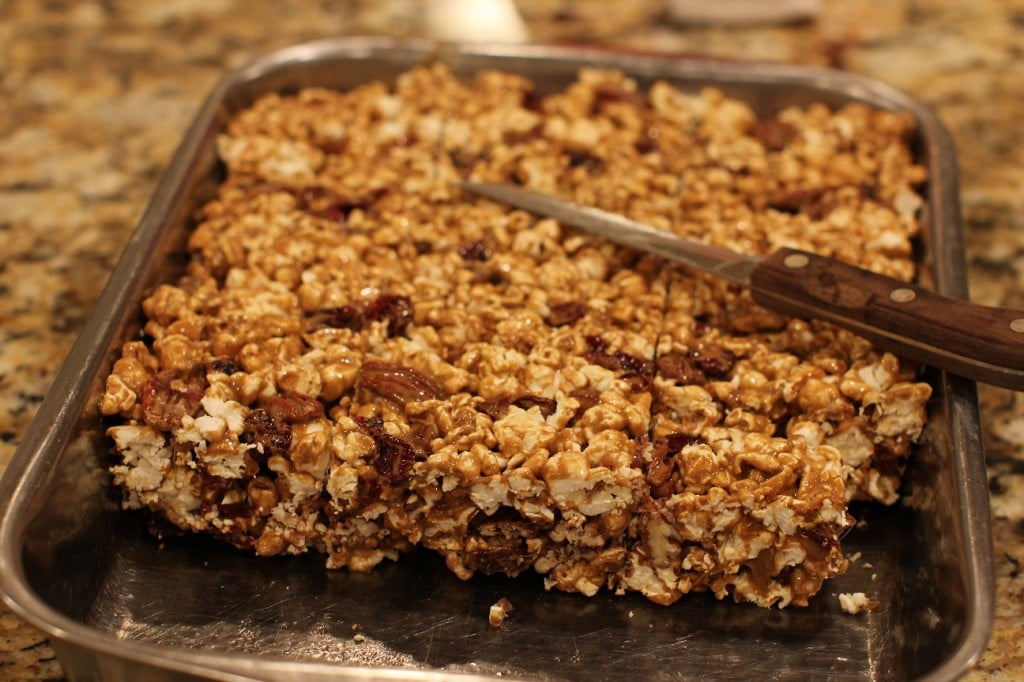 Keeps well at room temperature, uncovered, for up to a week, although it’s never lasted that long in our house! (The molasses keeps it from hardening.)

Choco-Crisps to Feed my Chocolate Addiction

The Un-Cheesecake with Coconut Crust and Berry Sauce 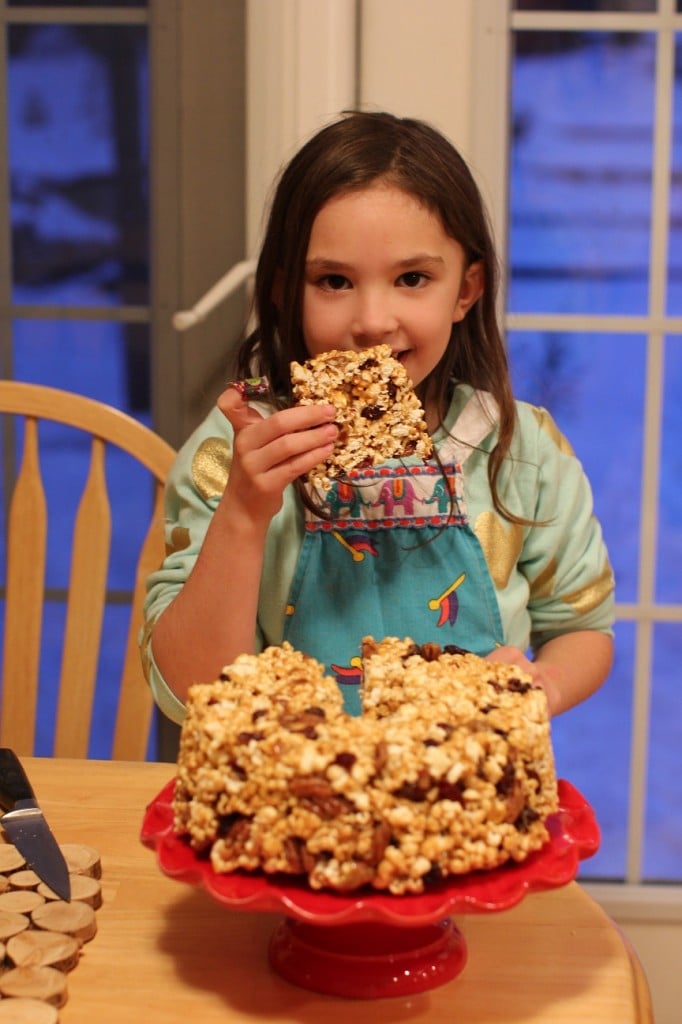