Turn your clump of garden chives into a sparkling culinary jewel. Chive Blossom Vinegar glows with a fantastic rosy hue and adds a gentle onion-flavoured tang to salad dressings and vinaigrettes, or a zesty finishing touch to a variety of recipes. (Skip to recipe.) 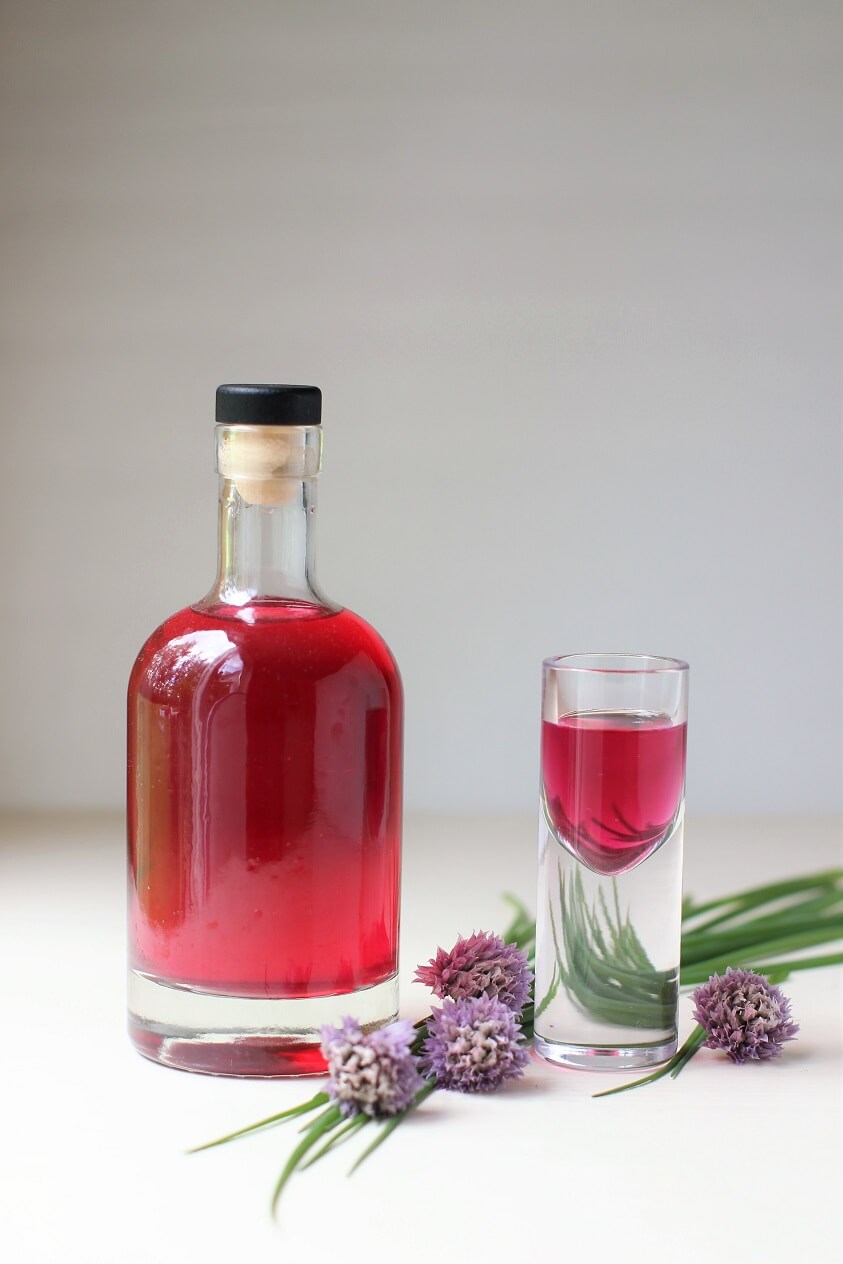 If you've got a clump of chives growing somewhere in your yard, you've got a green and purple gourmet treasure to be enjoyed. Not only do the chopped chives add a lovely mild onion flavour to so many dishes - sprinkled on salads, pasta dishes, added as a garnish to soups, stews, and casseroles. The edible flowers make an eye-catching garnish either used whole or pulled apart into delicate little purple flowerets to scatter across the top of dishes. You can use the whole plant.

I love having a bag of chopped chives in the freezer to use in winter cooking, and I save the tougher stems of the blossoms to put into my veggie scrap bag in the freezer for flavouring homemade stocks.

We have several large clumps of chives in our yard. I like to keep one to snip for daily use, and let the others grow and flower so I can harvest them. Chives regrow after cutting and we can usually get several harvests during the season. 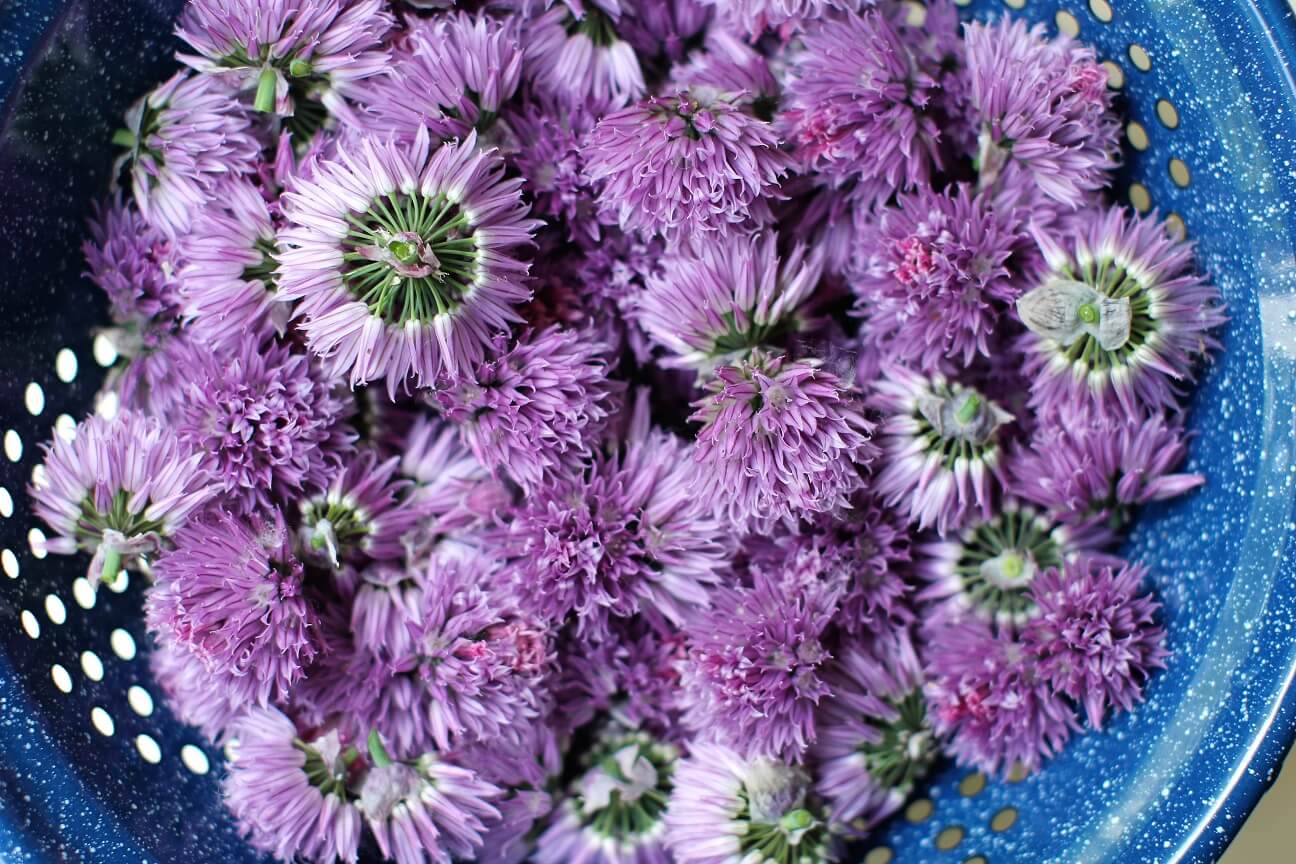 How to Harvest Chives and Make Chive Blossom Vinegar

When the chives are in full bloom, I just cut down the whole clump using scissors, a knife, or garden shears. 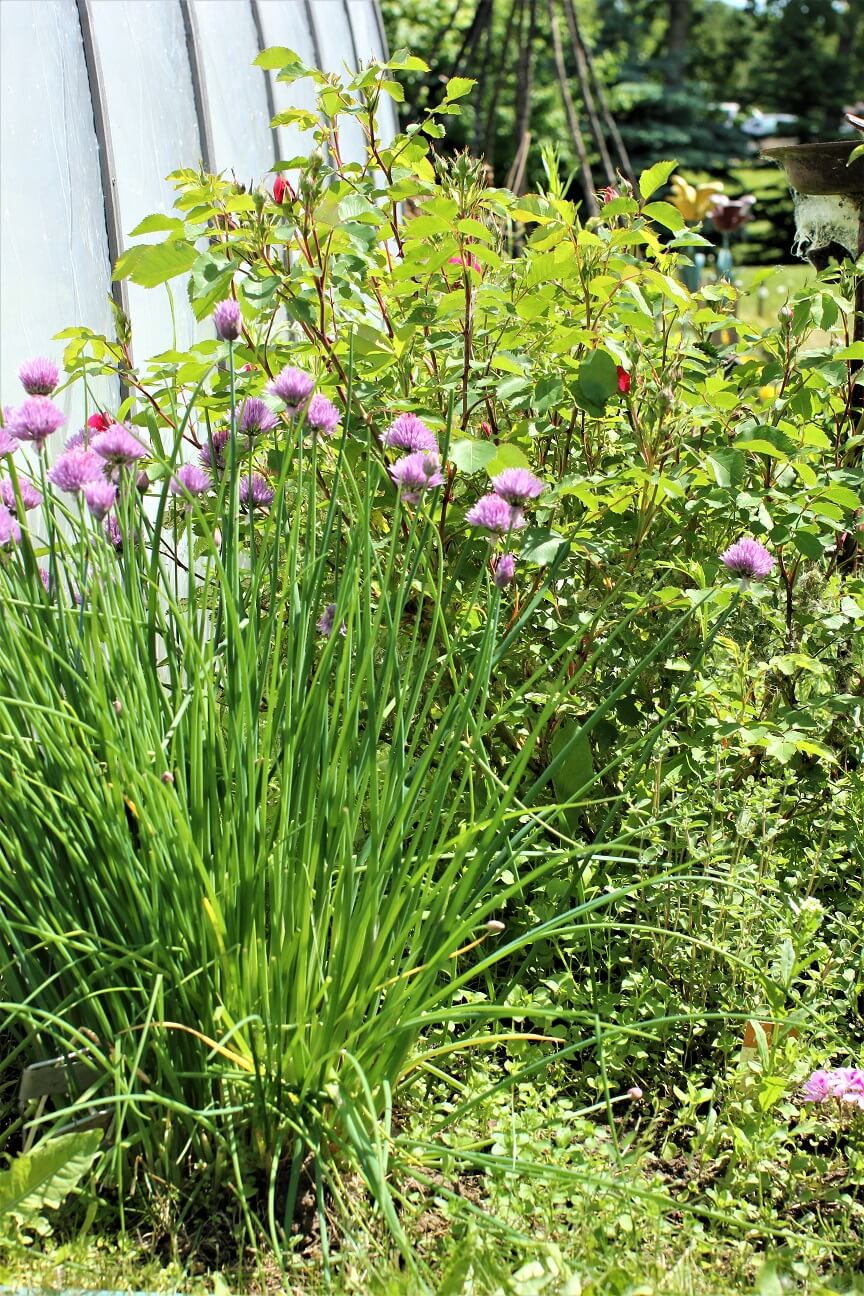 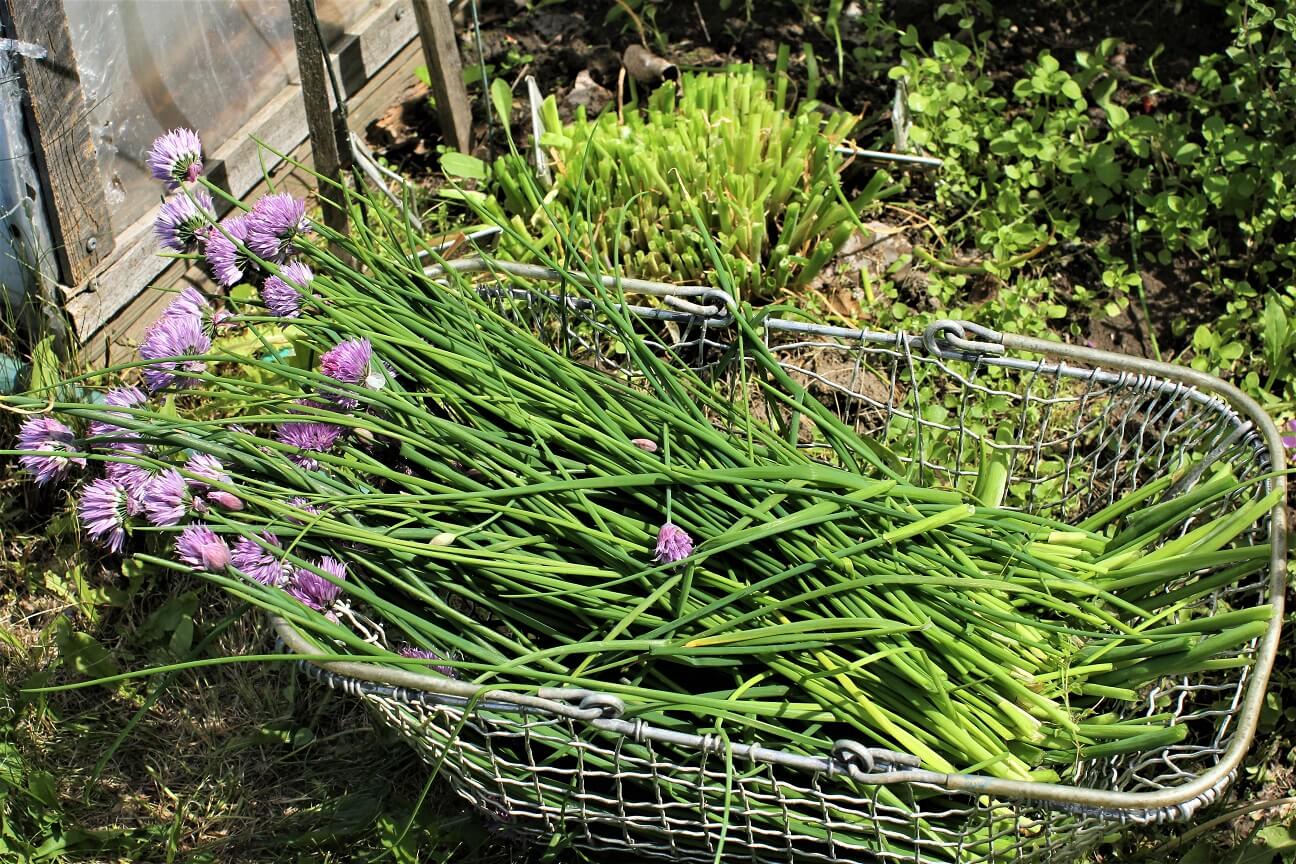 I separate out the stems with blossoms, snip off the blossoms to make vinegar, remove the sheath at the bottom of the stems, and snip the stems into shorter lengths to go into a freezer bag for making soup stocks. Then I finely snip the chives themselves and put them into a freezer bag - I don't even wash them if they are clean. If they're sandy or muddy, I give them a quick rinse. The frozen chopped chives are easy to remove for adding to cooking.

The blossoms get covered in vinegar and are set aside to steep. They just need a quick rinse to get rid of any bugs that might be hiding in there.

Chive blossom vinegar is a cinch to make and a beautiful culinary treasure to use all winter long. A small jar of it makes a lovely gift, too - as nice as any fancy gourmet vinegar, but homemade with love, by you.

The Story of Our Garden

We're already past Midummer's Eve, the longest day of the year, and here in the north it's light until 11 o'clock at night. These long daylight hours make our gardens explode with growth at this time of the year. We usually don't get them planted until some time in late May, but quickly catch up to the rest of the world because of our long daylight hours.

It was early May when our friend Ed came by with his trusty tractor to work the soil for us. You can see that the trees had no leaves yet and the raspberry canes (on the right) were still bare. 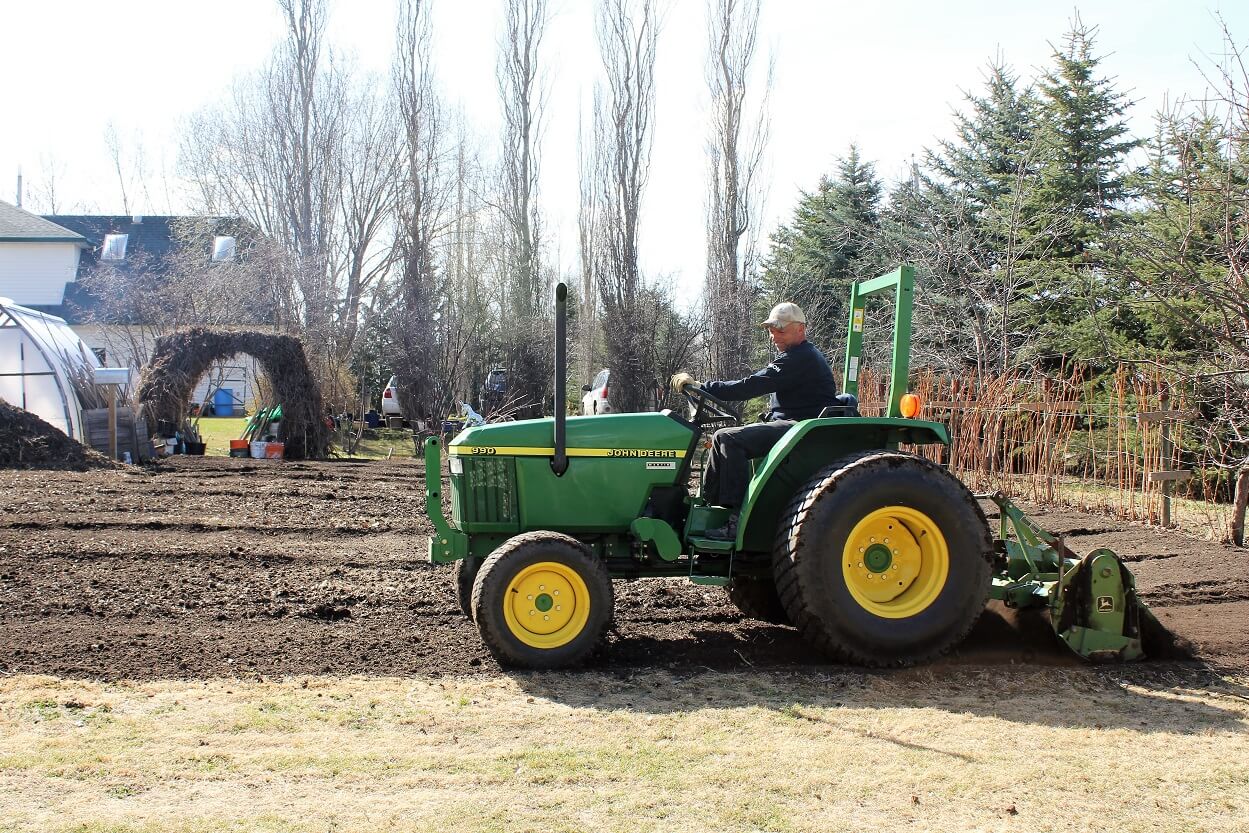 Over the next few weeks we got everything planted - mostly done by the end of May (though a last planting of beans and peas went in the middle of June).

Look at that garden now! It's rained a lot this spring and we've had a few sunny days, but we're sure hoping for more. We've been eating leaf lettuce and spinach already. The potatoes are starting to bloom so hopefully we can enjoy some new baby ones soon. The peas are to the top of the pea fence and blooming. Broad beans are several feet tall already, and the herbs are coming up lush and green.

Notice our new garden shed to the right side of the garden? It's been on my wish list for a long time. We're just waiting for the trim and siding to be finished, then I can start filling it with all my gardening junk. I'm way more excited than I should be over a new shed!

In the garden, I'm trying out using a floating row cover over our broccoli and kale so we don't get those icky green caterpillars in them - but I waited too long before putting it over the plants this year and got caterpillars inside the cover. I've been picking them off (and getting great pleasure drowning them in a bucket of water). I hope I got them all.

The brown you see on the pathway is a mulch made of grass clippings. There's fresh mulch in the bottom right corner around the zucchini plants. It really helps keep the pathways and wider rows from being muddy after all the rain, and tilling in the mulch each year adds lots of great fiber and nutrients to our soil. 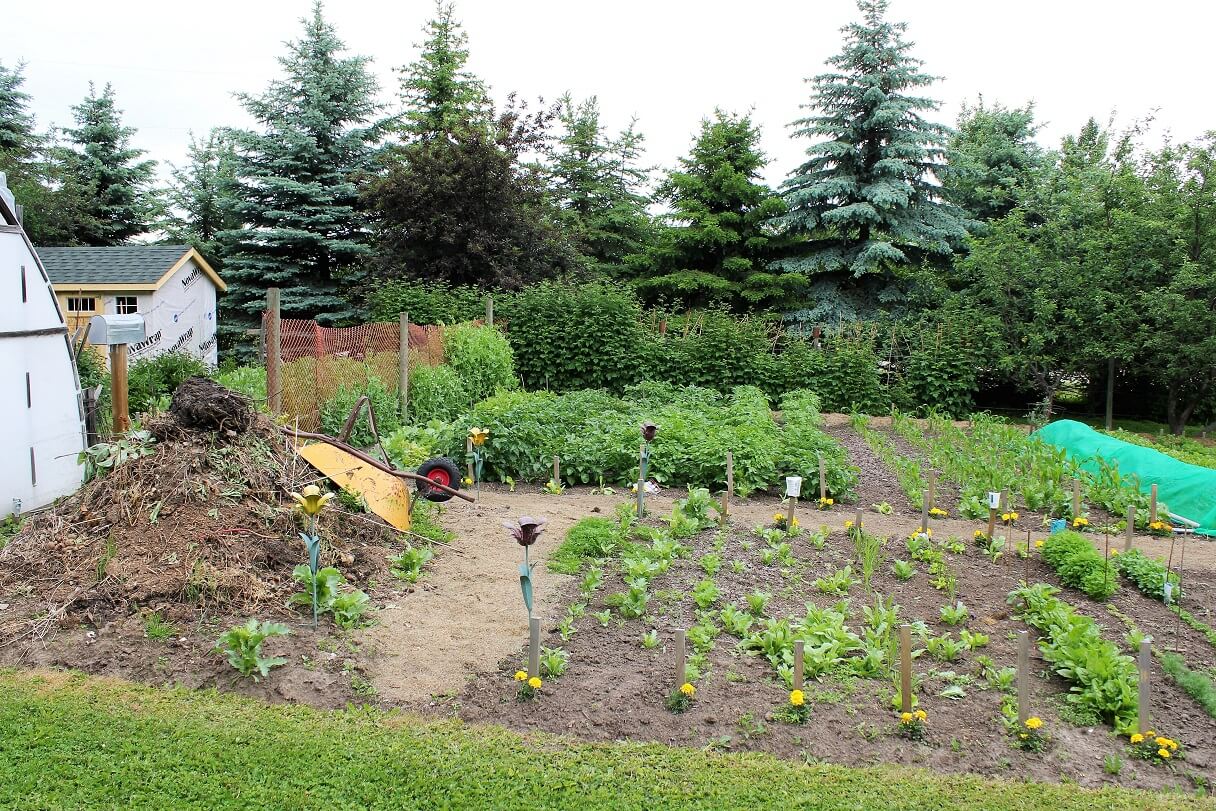 This past winter was a tough one on fruit trees and shrubs. We lost a lot - so sad. Raymond has spent a lot of the spring digging out mature trees and shrubs - like our flowering dogwood, a purple-leafed sandcherry, a Convoy cherry/plum hybrid, a mature apple tree (one we actually cut down last year), and worst of all - the winter killed off most of our large Evans cherry trees. We had three mature trees and two younger ones, and the three mature ones had most of their large branches totally die off - only a few sprouting bits left, which we hope will regrow. Those trees produced hundreds of pounds of sour cherries every year, and this year we'll be lucky if we get to taste a few. It is a tragic and all too common tale of gardening in the north. The winter winds were too harsh for those poor trees. But hopefully they are made of hardy stock, like the old pioneers, and will survive this severe setback to regrow again.

Luckily these ornamental crabapple trees survived and provided us with a stunning floral show earlier this year.

On to Our Chicken Chronicles

These blasted @#%!%!* chickens! We have never had a more skittish bunch! (Now I know where the usage for the word chicken to mean 'scaredy cat' comes from.) They freak out and fly up a the slightest provocation. We've had many new batches of chicks over the years, but never one that acts like this bunch. Half of them got severely crooked feet (we've never had that happen before), and I found out it is from being too active when they are very young - the chicks constantly got spooked and then piled on top of each other in a panic, causing their tender little chick feet to get bent and crooked. Apparently it doesn't impede their life, but it sure looks unsettling.

My mom is the Chicken Whisperer: 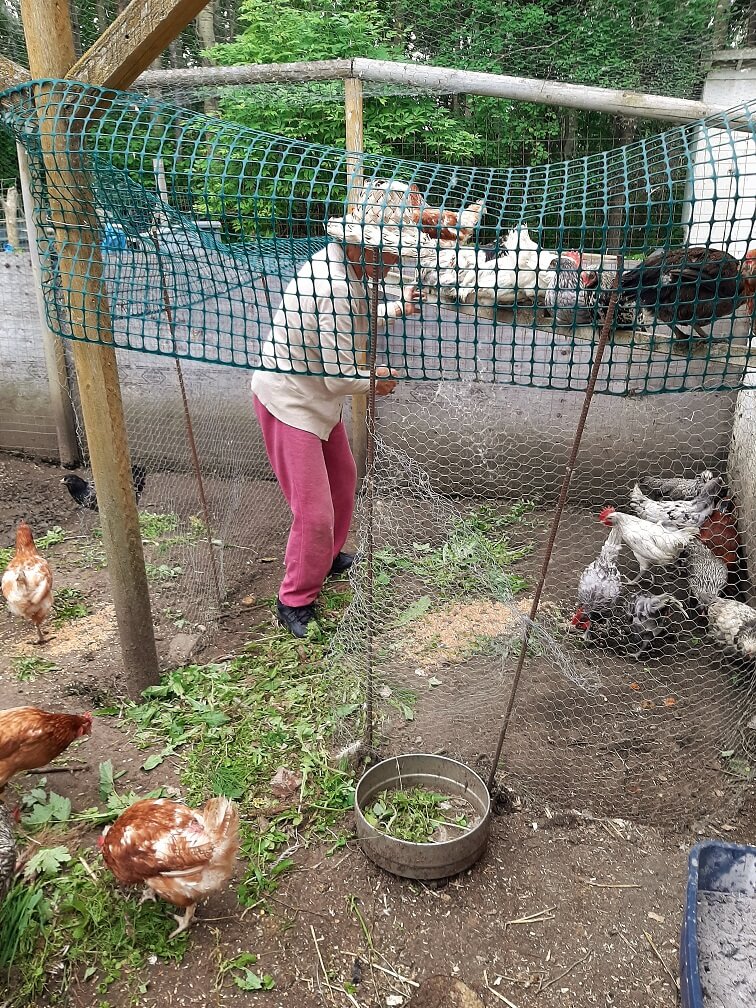 Two weeks ago (at 12 weeks old) we introduced this new batch of young chickens to the older hens, and it has been war ever since. The old biddies won't let the young ones near the food, and won't let them into the coop at night, so we have to do constant chicken surveillance and try to keep skirmishes from breaking out. The young ones, even the roosters, won't stand up for themselves. I think it might be the breed. I ordered two varieties: Ameraucanas and Blue Andalusians. We've often had Ameraucanas before (they lay the blue eggs) and they're quite a calm bird, but we've never had the Blue Andalusians. I think they're the skittish ones and they've got the Ameraucanas following their lead.

I think it's going to be an interesting summer in the chicken coop. Who needs to go on a holiday? We've got our own entertainment here. 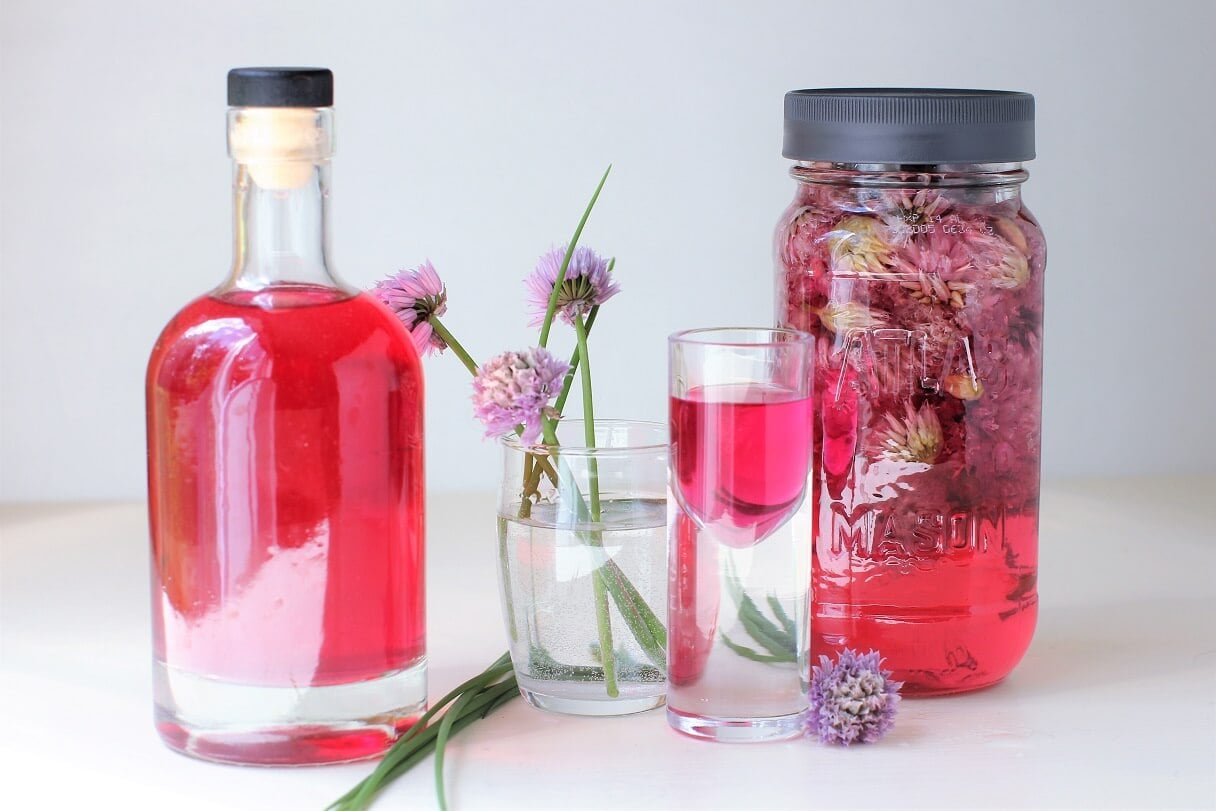 Back to the Chive Blossom Vinegar - it is a great way to preserve the chive harvest. That magenta pink colour is magnificent and the onion flavour adds a delicious extra layer of flavour to any dish you use it in. You can use it to replace regular vinegar or wine vinegar in any savoury recipe - it's especially tasty in vinaigrettes and salad dressings.

Kitchen Frau Notes: The amount of chive blossoms you use isn't really important - the more you stuff into the jar, the more deeply pink your vinegar will be (but if you pack them in too tightly, you won't have as much space for vinegar, so packing them loosely is the best middle ground). 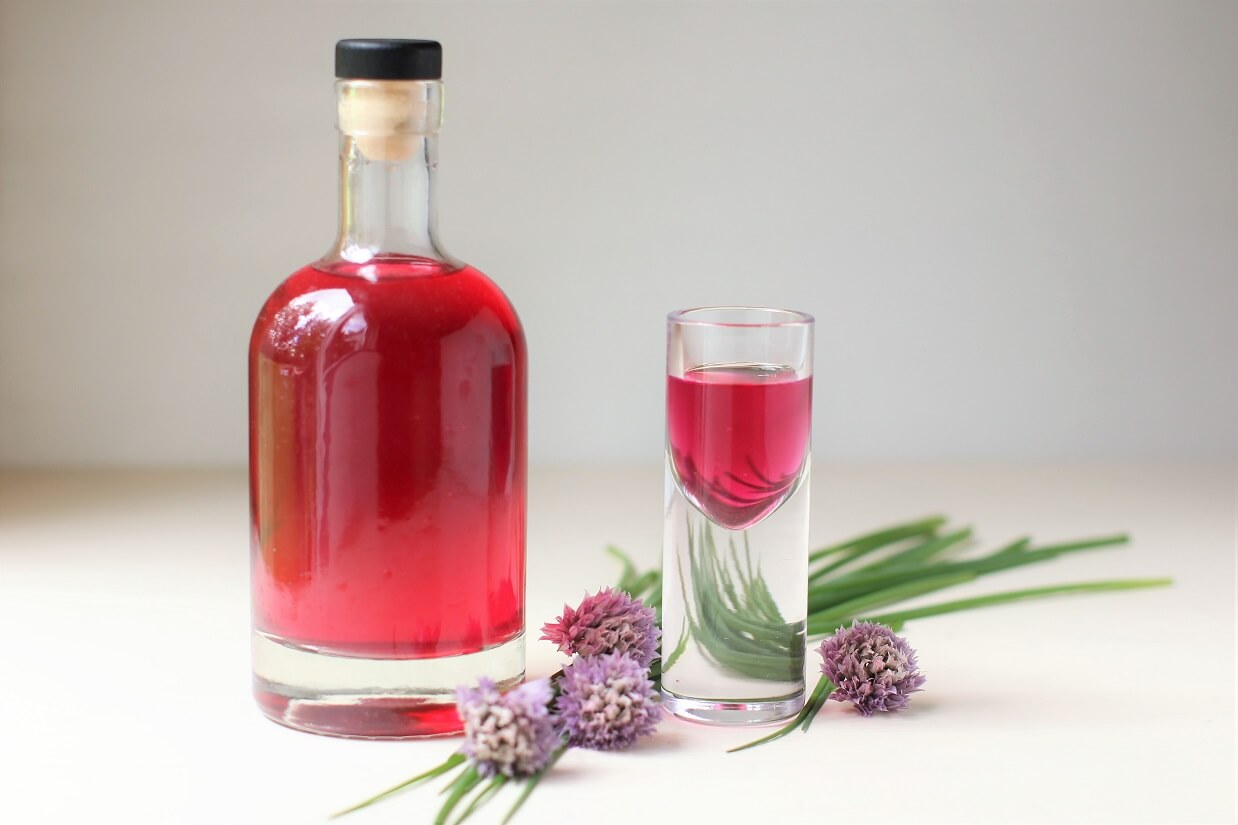 Snip the stems off the chive blossoms. Rinse the blossoms in water to remove any bugs, then drain them well. Lay them in a single layer on a tea towel and cover with another tea towel, pressing down gently to remove any remaining water.

Put the chive blossoms into a clean pint jar and pack them down gently just a bit, to get in as many blossoms as possible.

Leave in a cool dark place for 2 to 4 weeks to steep. Then strain the blossoms out and discard them. Decant the vinegar into a pretty jar. The beautiful pink chive blossom vinegar will keep for several months at room temperature, and up to a year in a sealed bottle in the refrigerator. Use it in savoury dishes wherever vinegar is called for to add an extra layer of flavour. The vinegar is especially tasty in salad dressings and vinaigrettes. 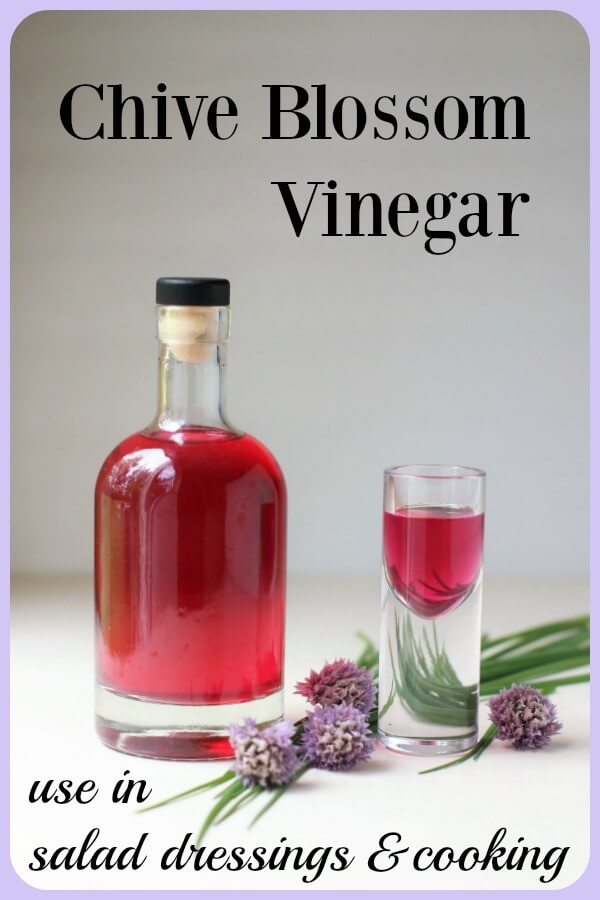