Caponata, a Sicilian eggplant and vegetable dish that's a bit sweet, a bit tangy, and full of rich flavour, makes the best appetizer. A bowl of this in your fridge is like a stash of gourmet gold. (Skip to recipe.)

When we were in Sicily, I discovered the amazing CAPONATA - a rich vegetable stew/relish/side-dish. It's like ratatouille but with an attitude; an in-your-face, 'I'm gonna make you an offer you can't refuse' ballsy attitude.

The first town we stopped at, once we'd disembarked from the ferry and driven about an hour along the autostrada, was the seaside town of Cefalù. We dropped off our bags at  our B&B (well, we tried to, but it was quite an ordeal maneuvering the car down the narrow street of the old town, trying to stop long enough to unload, lugging the bags up the narrow staircase, finding a place to park a couple kilometres away at the public harbour, then hiking all the way back - uphill - and finallyyyyyy . . . ) then we walked along the charming old cobbled street to find a place to eat. 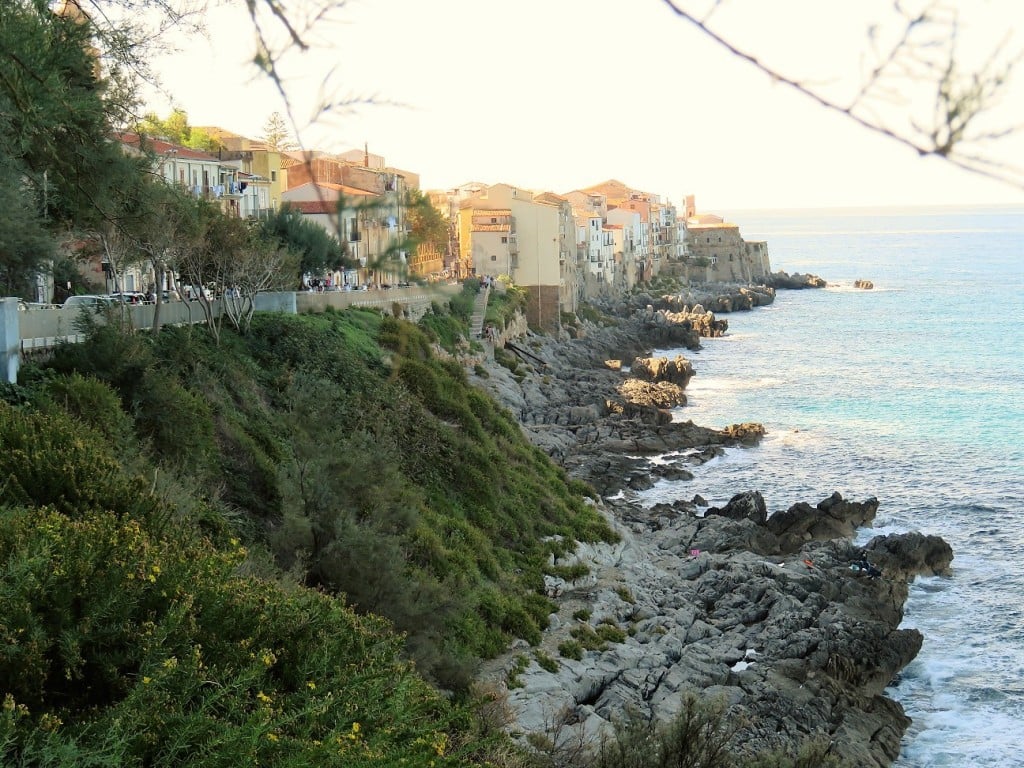 We were hungry (hangry), but restaurants were mostly closed until dinnertime. We ducked into a dimly-lit little place that looked like a cross between a disco lounge and a motorcycle showroom (not sure what made us choose that one), and asked the owner if we could get something to eat. He was most accommodating. We were the only people in the place and he directed us to a teeny-tiny balcony out the back side of the building. It was only big enough to hold one small table and two chairs, but oh my - the ocean was right there, just past a rocky strip of shore. 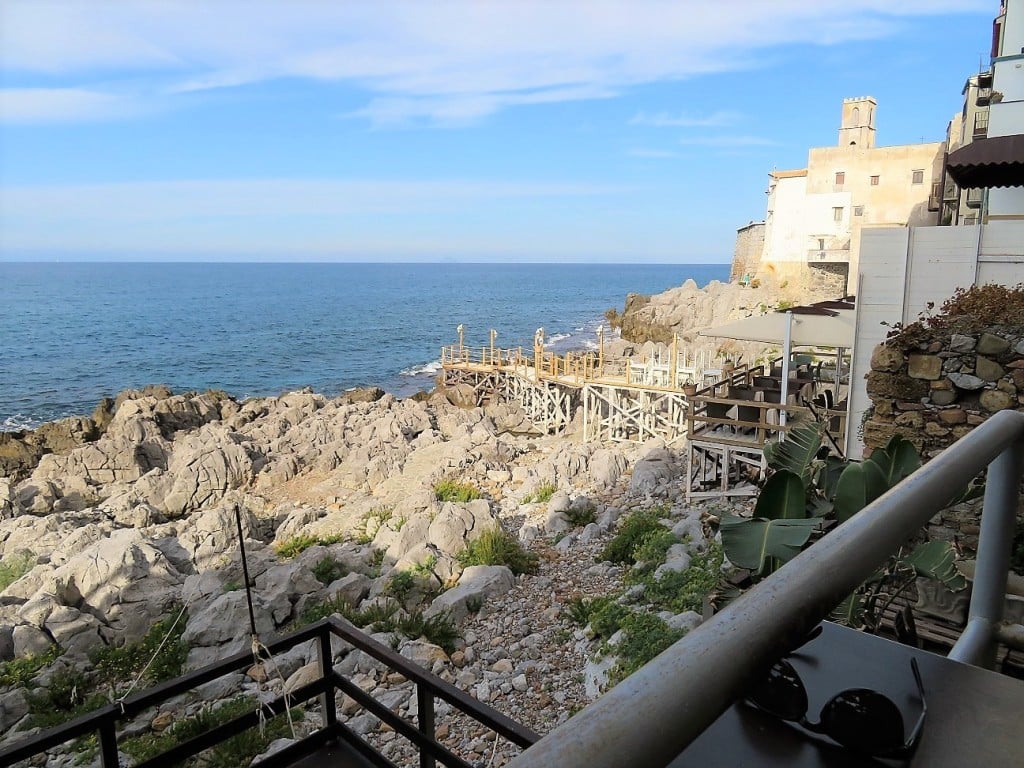 We settled into those chairs, ordered a cold glass of wine, and happiness slowly trickled back into my veins. I ordered a dish of caponata and Raymond ordered the Pasta Norma (one of Sicily's signature pasta dishes). I was smitten with my first forkful. 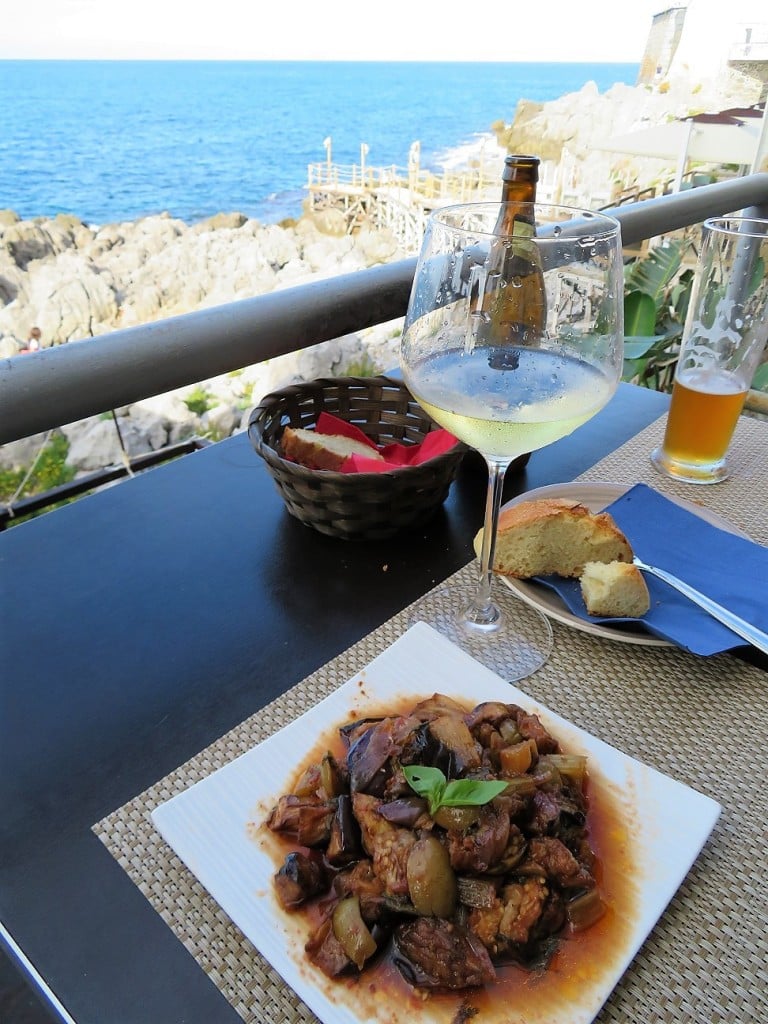 I don't know if it was just that I was so hungry, or that it was the first dish I ate in Sicily, or the wonderful ocean breeze cooling my sweating brow, (or that delicious cold glass of wine), but that caponata hit me in the forehead, picked me up, and dropped me back into my chair.

It was soooooo good.

It looked kind of like a dark ratatouille, but I wasn't prepared for the zing of the vinegar, or the sweetness singing through the creamy eggplant, or the depth of flavour from the olives and pools of tomato-red oil. I lapped up every bit of that caponata (grudgingly offering Raymond a taste). It was an act of restraint not to lick the plate clean, but I wiped off the last bits of flavour with a swish of bread.

After that I was on 'Mission Caponata', ordering it whenever I could. And there were as many different versions of this sweet-sour eggplant dish as there are good cooks on the sunny Sicilian island (only about a zillion). Some, like that first one, were basically eggplant, onions, celery, and olives. Several included carrots, red pepper or both. Some had raisins or pine nuts, some didn't. One was quite spicy. Some had the vegetables in large chunks, some had them cut smaller. The unifying factor was eggplant and olives, with a sweet and sour base and lots of lovely olive oil.

So, as you can see, in the world of caponata, almost anything goes.

The beauty for us home cooks is that we can customize this dish to our tastes.

Most recipes say to deep-fry the eggplants separately, cook the vegetables separately, and combine it all at the end. One of my little souvenir cookbooks gives an oven-baked version (though you needed to fry the eggplant separately here, too). I've made several batches of caponata since I've returned from my holiday, tweaking them until I've come up with the flavour profile we love the most and which reminds me of the best caponatas I tasted in Sicily.

So . . . I've figured out a lazy way to make caponata. No deep-frying of the eggplant. Sauté it all together, plunk it in the oven, and bake it. My version of caponata is not quite as dark in colour as the true Sicilian ones, but the taste is just as I remember it from our glorious meals in Sicily. 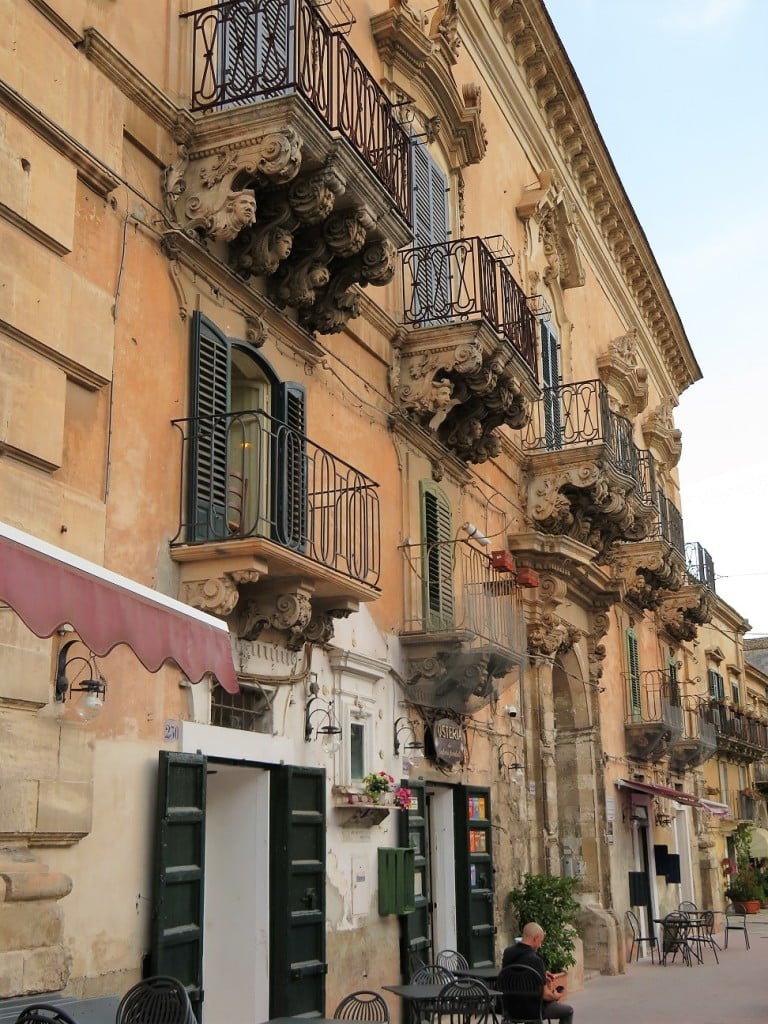 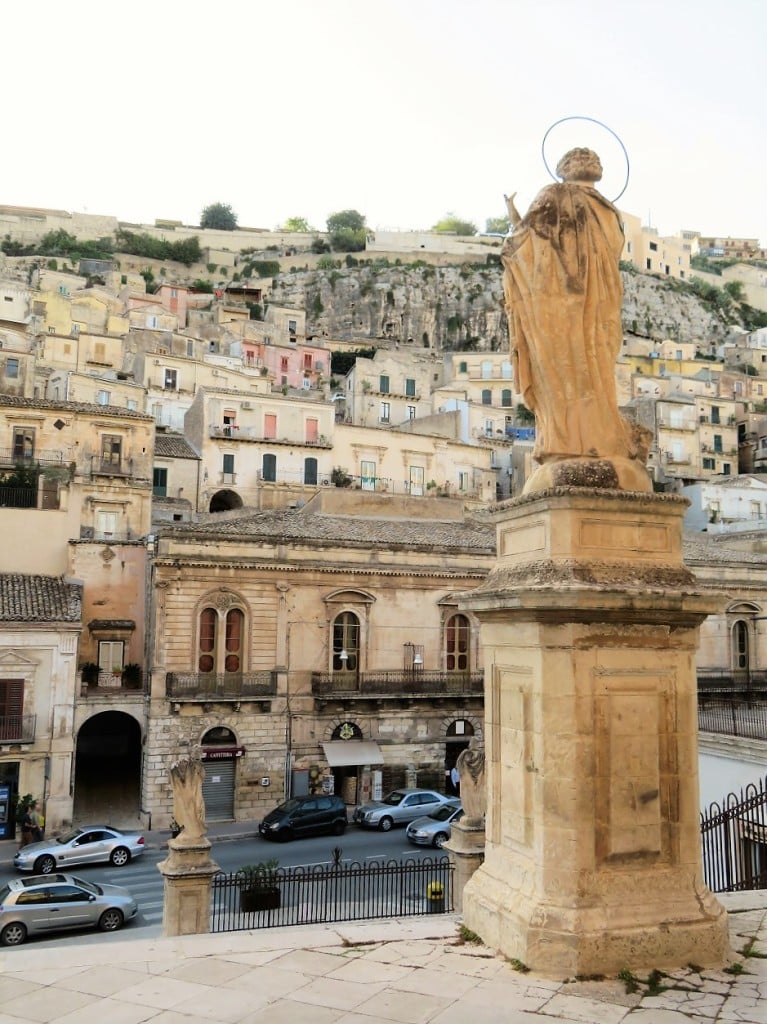 Make yourself a batch of caponata just before the Christmas festivities start, and you'll have a secret weapon to pull out of the fridge whenever guests arrive. It can be the star of an antipasti platter, lovely to just eat with a fork, or to pile onto crackers or chewy Italian or French bread, or serve it as a side dish for a light sandwich lunch or full course meal. 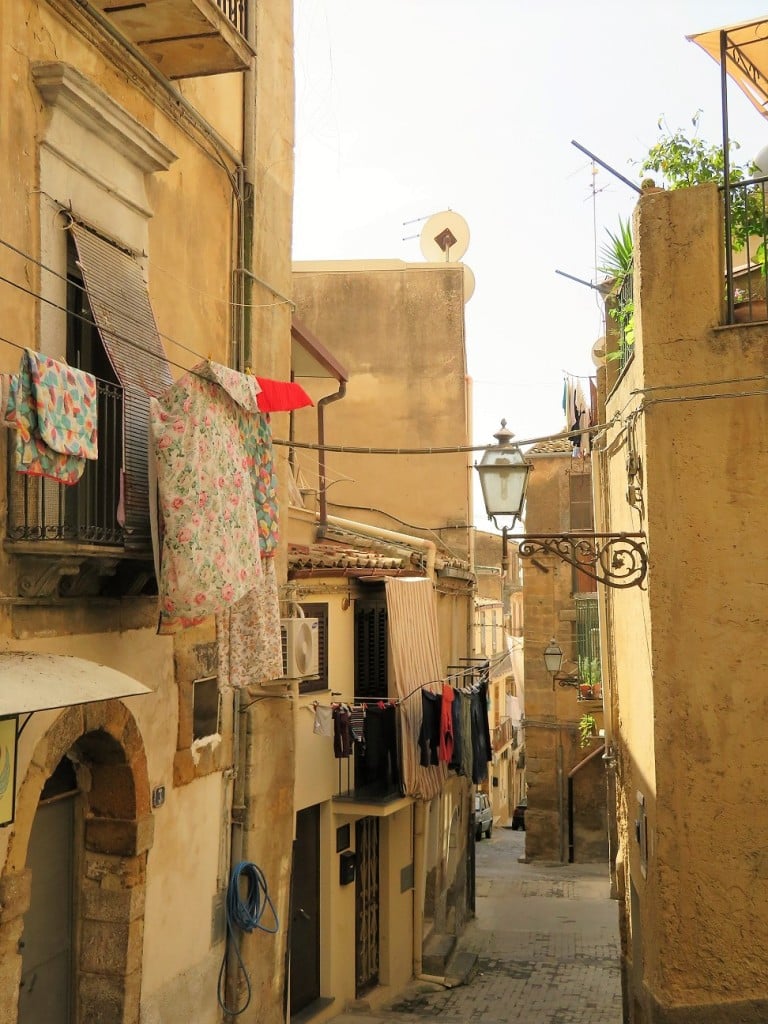 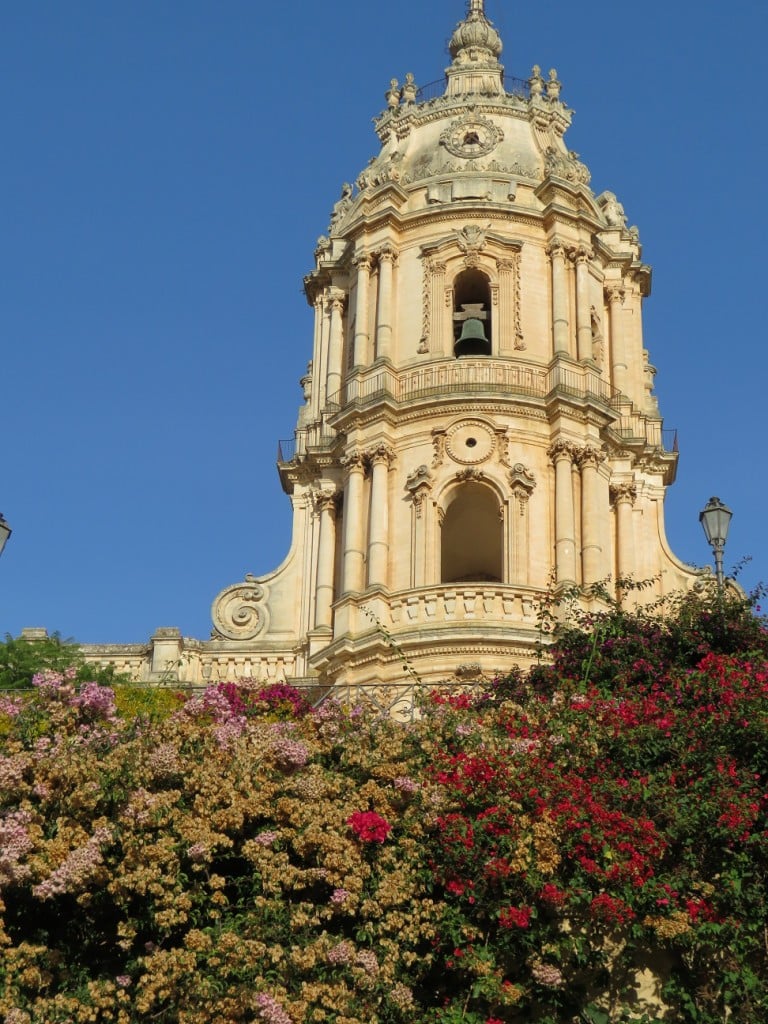 We had a group of friends for dinner last weekend, and here's a photo of our antipasti tray. (A little dish of honey to drizzle onto your cheese cubes or salami slices is a tasty Italian trick.)

Nicoletta, who grew up in Rome and writes the lovely blog SugarLoveSpices with her husband Loreto, said the caponata tastes just like the ones she's had in Italy, so I think I'm on the right track.

Kitchen Frau Notes: Caponata lends itself easily to freewheeling. Adjust the ingredients to your tastes and to what you have in your fridge. Capers can be omitted, as can the nuts or the raisins (although the bits of crunch provided by the nuts is a nice contrast). Amounts of vegetables don't need to be exact. Add a pinch of chili flakes if you'd like it spicy. As long as you have a nice balance of sweet and sour, and a good dose of olive oil to make it silky and luxurious, your caponata will still be delicious. 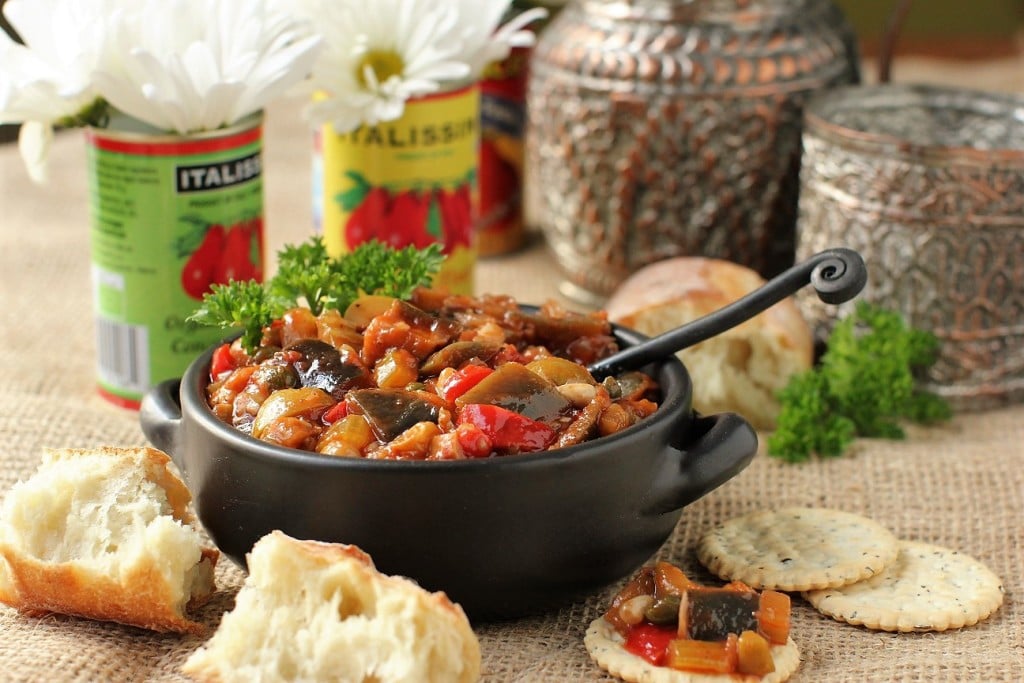 Dice the eggplant into ¾ inch (1.5cm) cubes and add them to the vegetables. Sauté for 5 more minutes.

Add the canned tomatoes and their juices, breaking the tomatoes up with your hands into small bits. Add the olives, raisins, pine nuts, capers, vinegar, and sugar. Stir gently to combine everything, being careful not to break up the eggplant chunks.

Allow to cool partially. Stir gently to distribute the oil throughout. Serve warm or at room temperature with bread or crackers, as a part of an antipasti platter, or as a side dish to a meal.

Caponata will keep refrigerated for up to two weeks. Bring to room temperature before serving.

Chicken in Orange Sauce and a Cooking Class in Rome