Everyone needs a recipe for a simple, flavourful marinara sauce in their repertoire. Serve it with these fun spaghetti spiders and kids will love to help cook it and eat it! (Skip to recipe.) 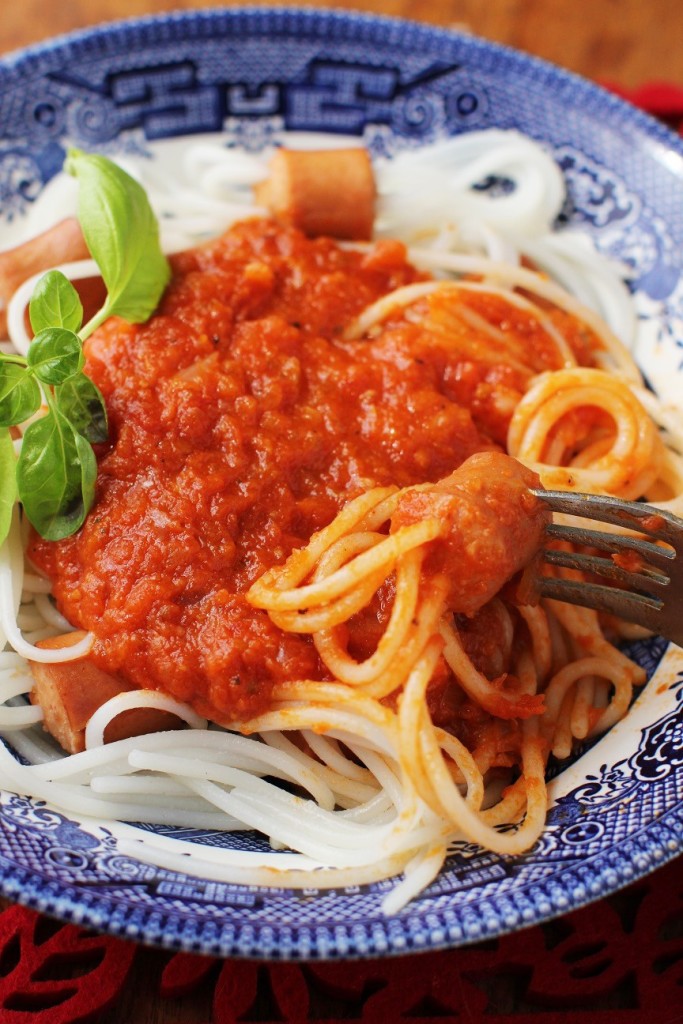 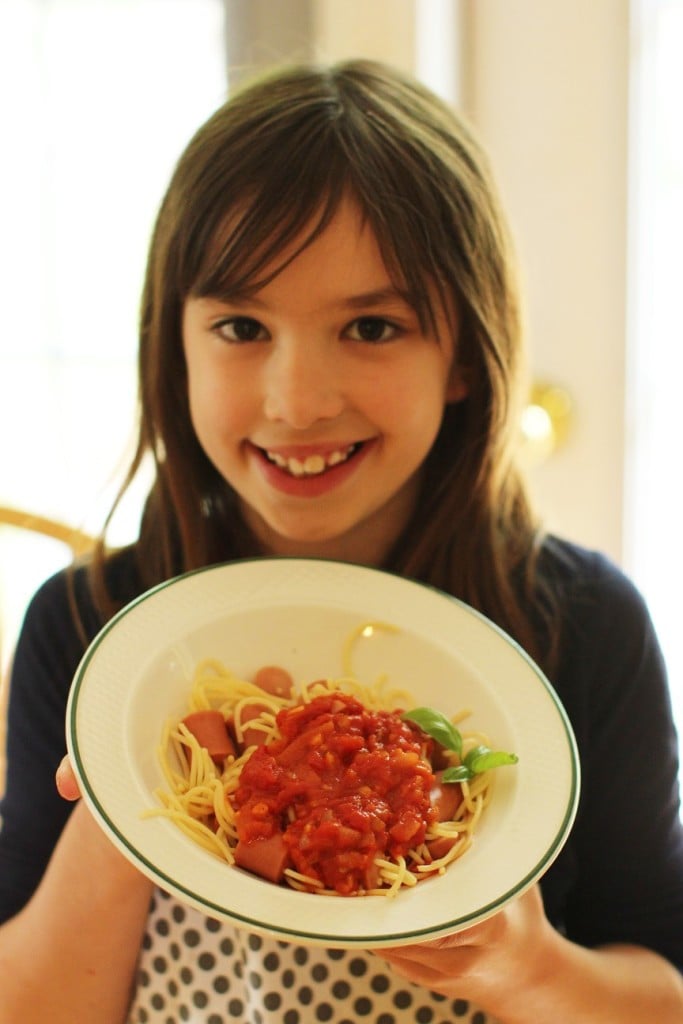 It's usually just called 'tomato sauce' but if you want to be Italian about it, then this classic sauce needs to be called Marinara Sauce. It's a quick and delicious meal when served over pasta, but is also used as the base for many other dishes. Once you taste how flavourful homemade marinara sauce is and see how easy it is to make, you'll never want to buy the canned stuff again. Every cook needs to know how to make it.

Marinara sauce is believed to get its name from the 'mariners' or sea-going folk of southern Italy around Naples. Classic marinara sauce is made with canned tomatoes, olive oil, onions, garlic, and herbs. Some purists say it shouldn't even have onions in it, but I like the sweetness the onions add (and I like the richness a bit of butter adds, too).

And then to have a little fun with our spaghetti, Miss Marinara and I turned the noodles into 'spaghetti spiders', or spaghetti 'whiskers', if you want to be artistically correct. 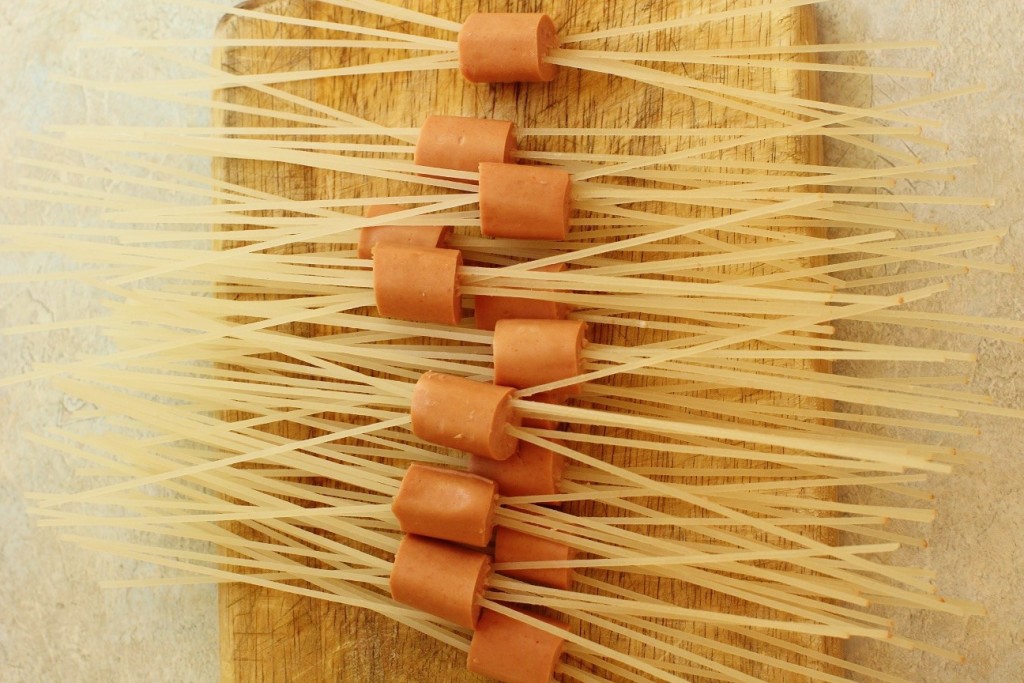 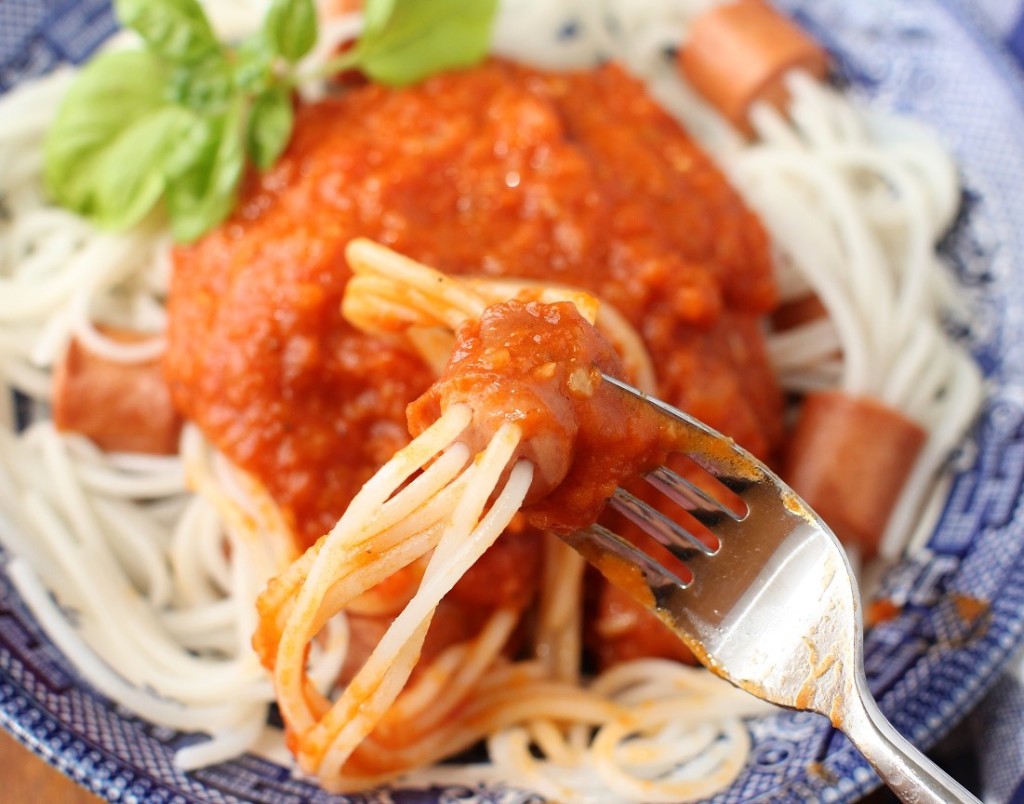 Instead of meatballs in your marinara sauce, try wieners in your spaghetti! It's a quick way to fancy up your noodles and make mealtime a bit on the wild side!

Kitchen Frau Notes: The brand of tomatoes you use for the marinara sauce can make a world of difference. Make sure to use a good quality whole canned plum tomato. If you can get San Marzano tomatoes, those are the best and will make a rich, red, fresh tasting sauce. More watery brands may have to be cooked a little longer to get the sauce thick enough.

You can leave the marinara sauce chunky, or puree it a bit with an immersion blender, or even puree it until it is completely smooth, whatever your preference. 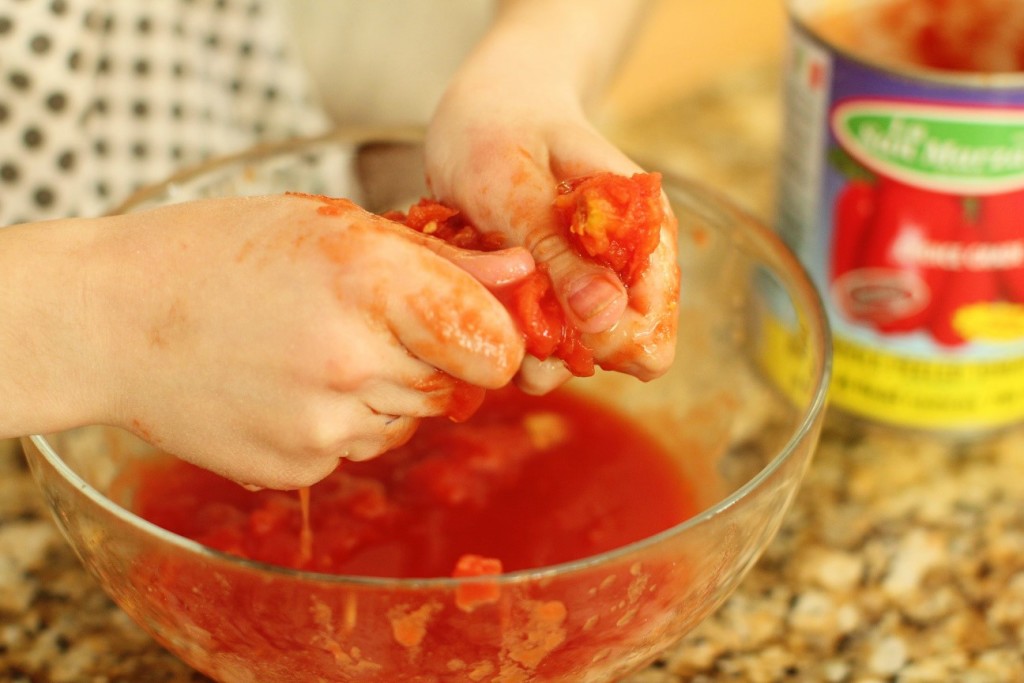 Wieners are a rare addition to the menu in our house - mostly just for roasting over a campfire, but when I do buy them, I make sure to get the 'naturals' brands that are made without any added nitrates, and are gluten free. 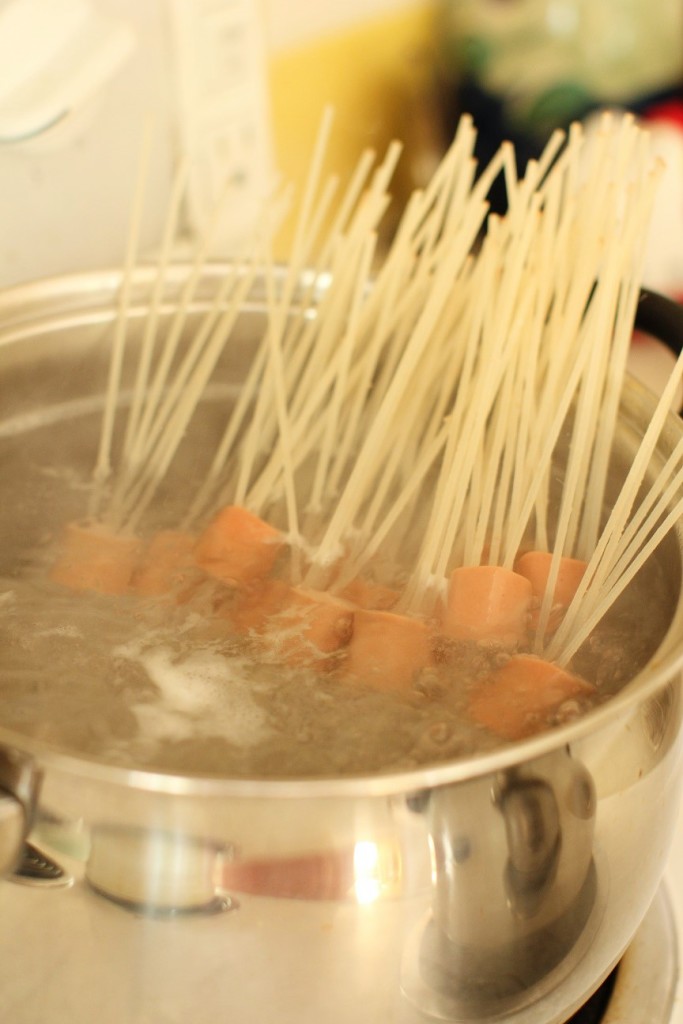 If using gluten free spaghetti to make the spaghetti spiders, make sure to use a brand that has noodles which are as thick as regular spaghetti. Some gluten free brands have thinner noodles (more like spaghettini) which tend to break off during cooking. I found the Tinkyada rice spaghetti works well here. 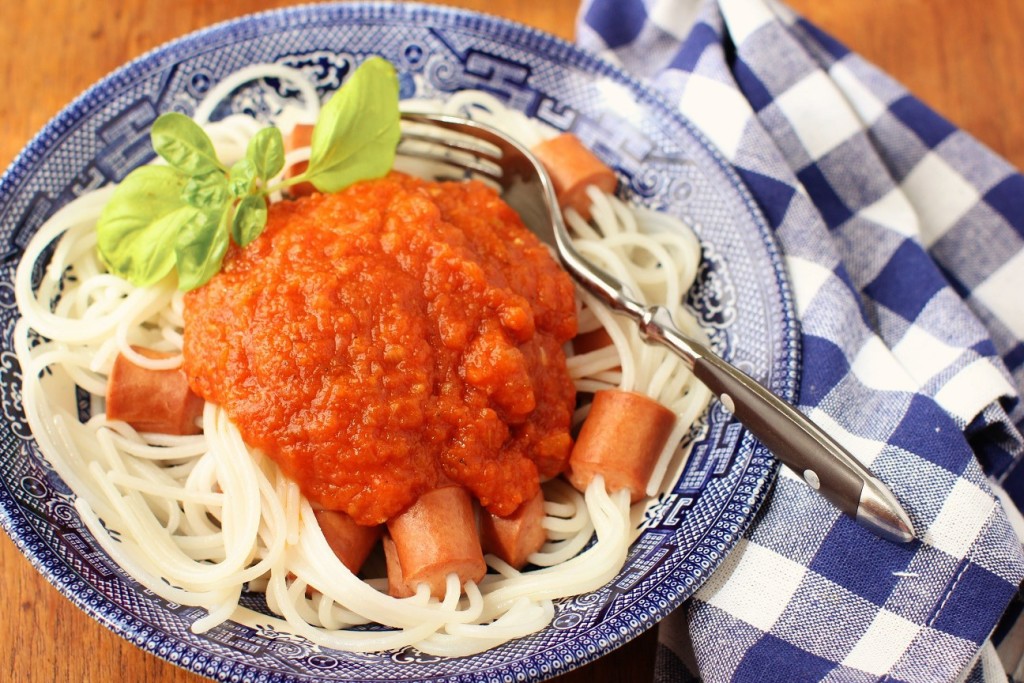 In a wide deep skillet (a wide pot is best so the sauce evaporates more quickly while cooking), heat the olive oil and butter (if using) over medium heat. Chop the onion finely and mince the garlic or put it through a garlic press. Add the onions to the oil and cook for two minutes, stirring occasionally. Add the garlic, salt, pepper, and herbs, and cook for two more minutes.

Squish the tomatoes with your hands into a bowl, being careful so the juices don't squirt. Add the tomatoes to the skillet. Pour 1 cup of water into the tomato can and swish it around to get all the juices. Pour the water into the skillet. Once the tomatoes come to a boil, turn the heat down a bit so the sauce is steadily bubbling. Cook and stir for about 20 minutes, or until the sauce is as thick as you like it. If you slide a wooden spoon through it, you should be able to see the bottom of the pan for a few seconds before the sauce runs back.

Use the sauce chunky, or use an immersion blender to puree it a bit or a lot to make it smoother.

While the marinara sauce is cooking, put a large pot of water on to boil.

Cut about ¼-inch (.5cm) off the end of each wiener. Cut each wiener into five 1-inch pieces. Carefully poke 6 or 7 strands of uncooked spaghetti through the cut ends of each wiener piece, pushing them through so an equal amount of noodle sticks out on each side.

For more fun kitchen projects to make with kids, see the ‘Cooking With Kids’ series.

Pasta Sauce with Sardines and Capers

« Strawberry Rhubarb Pavlova Cake and It's Been Five Years (Five Years!)
Homemade Gluten Free Pancake Mix (Because Camping Season is Upon Us) »