Here's a simple method and some handy tips for how to freeze corn, so you can enjoy this sweet vegetable all year long. (Skip to recipe.) 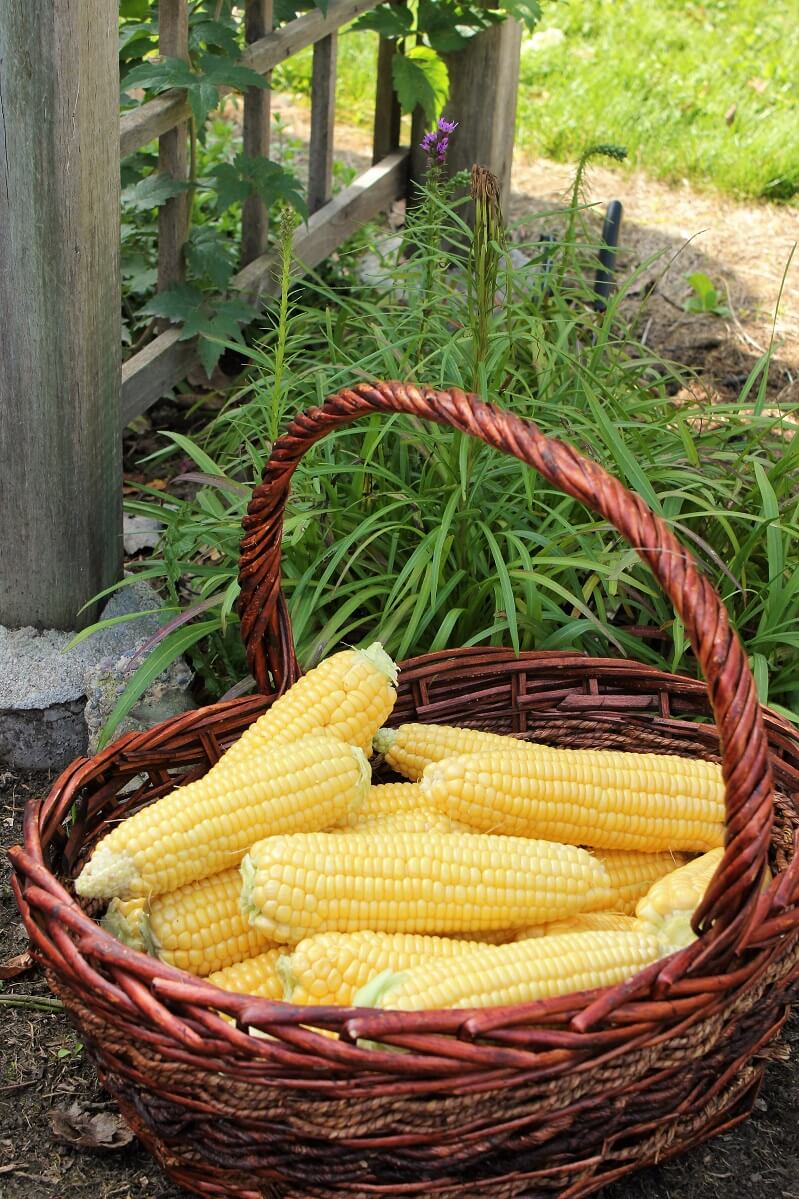 We're into the thick of harvest season, and if you're enjoying the bounty of fruits and vegetables from your garden or the farmers' markets right now you may want to 'put up' some of that abundant produce. I'm busy canning and freezing, drying, jamming, and jellying like crazy. Our kitchen is a hive of preserving activity, with stacks of jars both full and empty piled up on counters, baskets of produce waiting in corners, sticky floors, and bubbling pots crowding the stove. One of my favourite foods to preserve is corn.

I'm not sure if that's because of the fun of picking it in the garden, the satisfaction of slicing those kernels cleanly off the cob, or scraping the milky bits off, or if it's just the delicious pleasure of grabbing a blanched cob of sweet corn out of the pile whenever I get the urge to nibble. I'm not usually hungry for dinner when I've been freezing corn.

When I was growing up, my mom mostly froze our corn whole, on the cobs. It is not quite as crisp as when it is cooked and served fresh, but is still very tasty. We loved having corn on the cob in the winter time. Nowadays, I usually cut my corn off the cobs, though, because I don't have the freezer space to freeze the cobs whole. Growing up, we had two huuuuuge chest freezers: one just for meat and one for fruits and vegetables. I don't have a big hungry farm family to feed, so don't have nearly as much freezer space - even though with one small chest freezer, one upright freezer, and two top-of-fridge freezers, you'd think I should have lots of room. But they always seem to be full, no matter how much I try to get their contents used up. (There are little freezer gremlins at work, I swear, adding stuff whenever I'm not looking.)

Corn is amazingly sweet if you cook it right after picking - the old saying is that you should have the water boiling in the pot before you go to pick the corn for supper. The sugars in corn start converting to starch as soon as it is picked - that's why you don't want to have it laying around for days. It's still tasty, but just won't be as sweet. You need to blanch corn (a quick trip in boiling water) before freezing, in order to deactivate the enzyme that turns those sugars into starch. 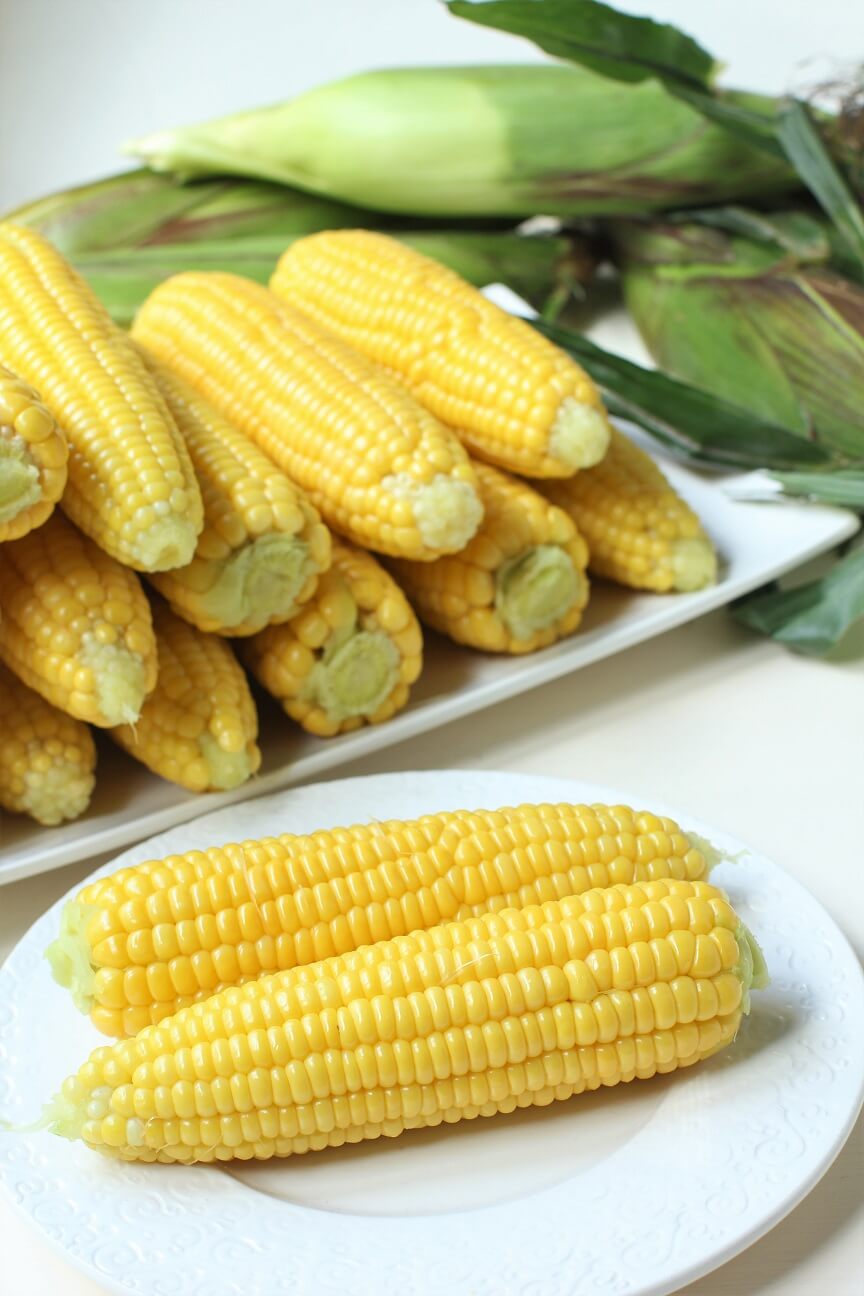 Some tasty ways to use your fresh or frozen corn:

Corn is a vegetable that freezes well, retaining a good texture when frozen. Some years we freeze the corn all in one go - a wheelbarrow piled high full of cobs we've picked, and both Raymond and I doing a work bee to get it done. But this year I've been doing a few dozen cobs every day, and that's working well.

How to Freeze Corn

Shuck the corn: peel off all the husks and get out as much of the silk as you can. Break or cut off any piece of stem that remains.

Fill a large pot about two thirds full of water and bring it to a boil.

Add as many corn cobs as will fit without the water getting too high and that they can mostly be submerged under the water. Keep the temperature on high. 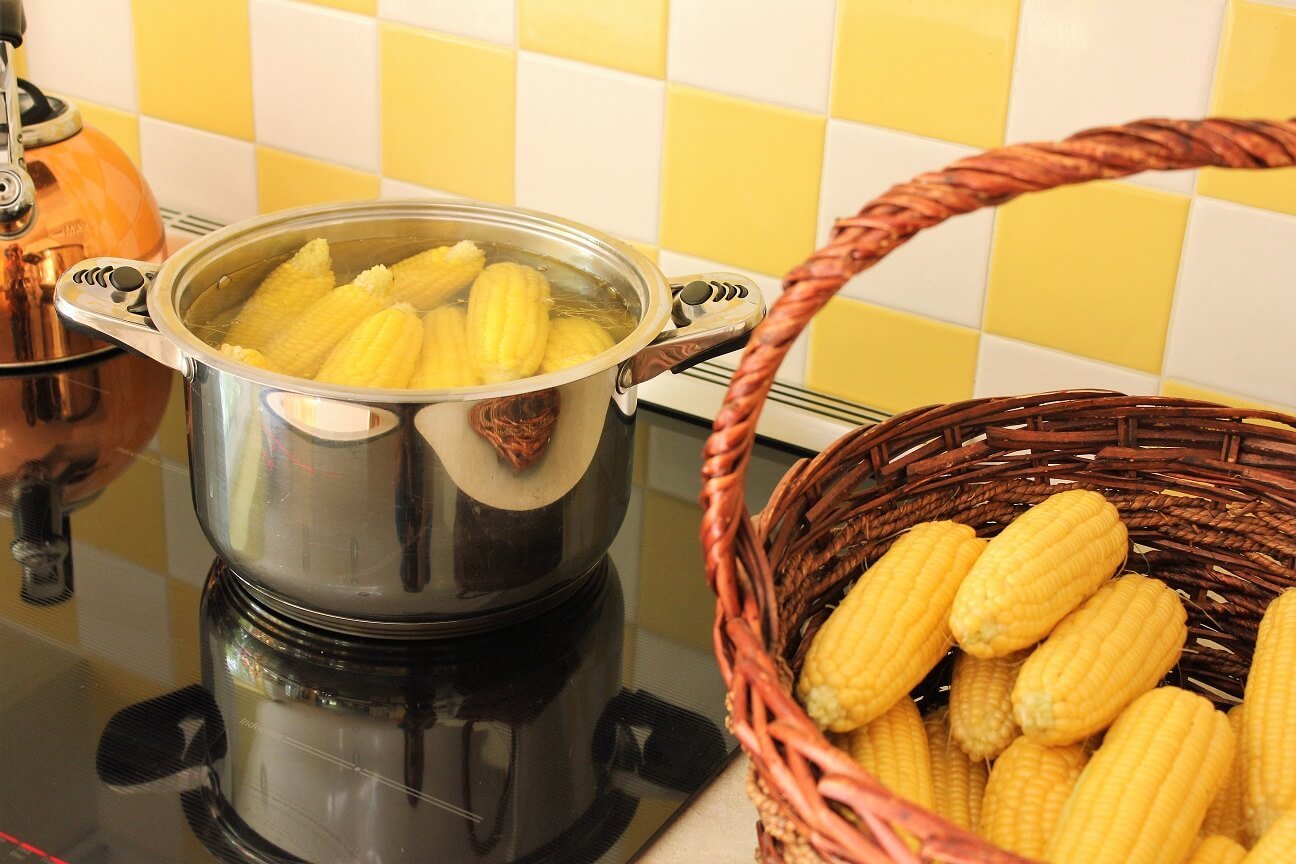 Bring the water back to a boil, then keep it boiling for two minutes.

Prepare a large bowl or pot or a clean sink with cold water. Remove the corn cobs from the boiling water with tongs and immediately put them into the cold water. Leave them in there until cooled, refreshing the water if it gets too warm.

Add your next batch of cobs to the boiling water in the pot and repeat the steps.

Remove the cooled cobs to a bowl or baking sheet to drain. If you plan to freeze some of the cobs whole, they are ready to bag at this point (*see below).

If you are freezing the corn as kernels, continue as follows.

Prepare the cutting area by setting a cutting board inside a shallow rimmed baking sheet. (I know there are nifty tips out there to set the cob onto the center of a bundt pan and cut downwards, letting the kernels fall into the pan, but I don't like to damage my knives by having them occasionally hit down onto the metal of the pan when I get too much in a rush and don't watch what I'm doing.) 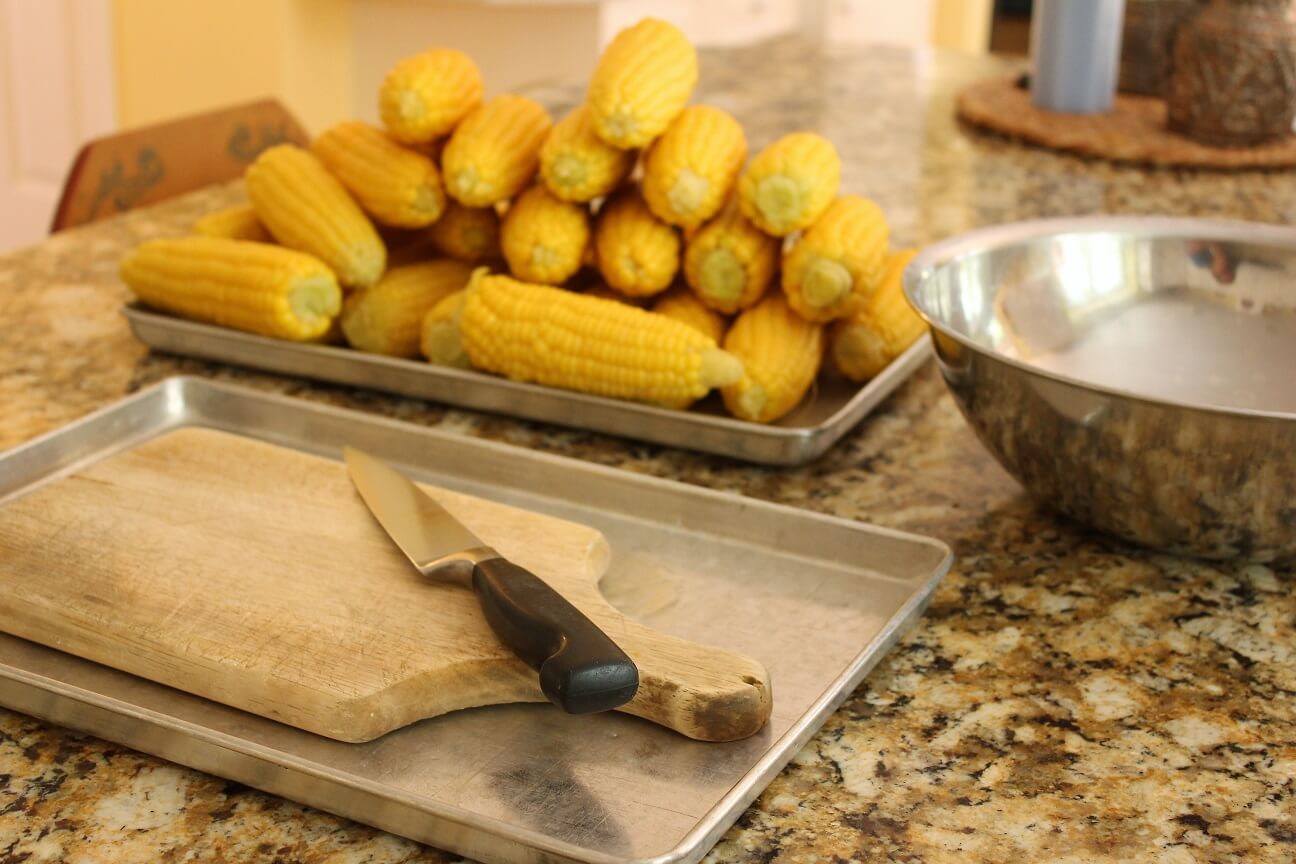 To remove the kernels, hold a cob upright (thick end down) on the cutting board and with your other hand, slice downwards cutting off the kernels as close to the cob as you can. Let the kernels fall onto the cutting board and into the pan. Keep rotating the cob and cutting off the kernels until you have them all cut off. The baking sheet will catch most of the loose kernels (though, without fail, you'll have a few errant bad boys flying around the kitchen and sticking in places where they have no business being). 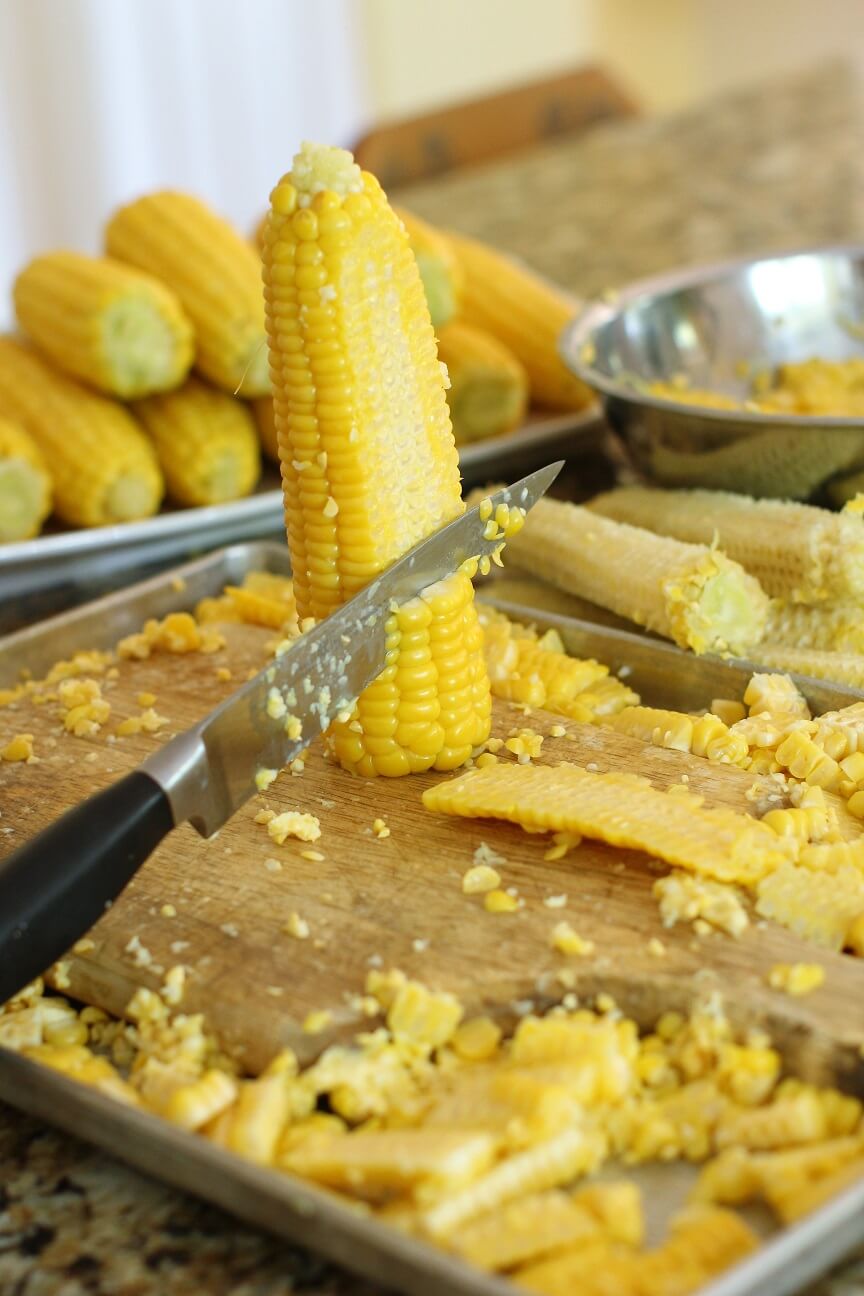 Then, turn your knife around, and using the back (dull) side of the blade, scrape the cobs clean to get all the sweet milky pulp and little hearts of the kernels - the best part of the corn! (Some people call this 'milking the cobs'). 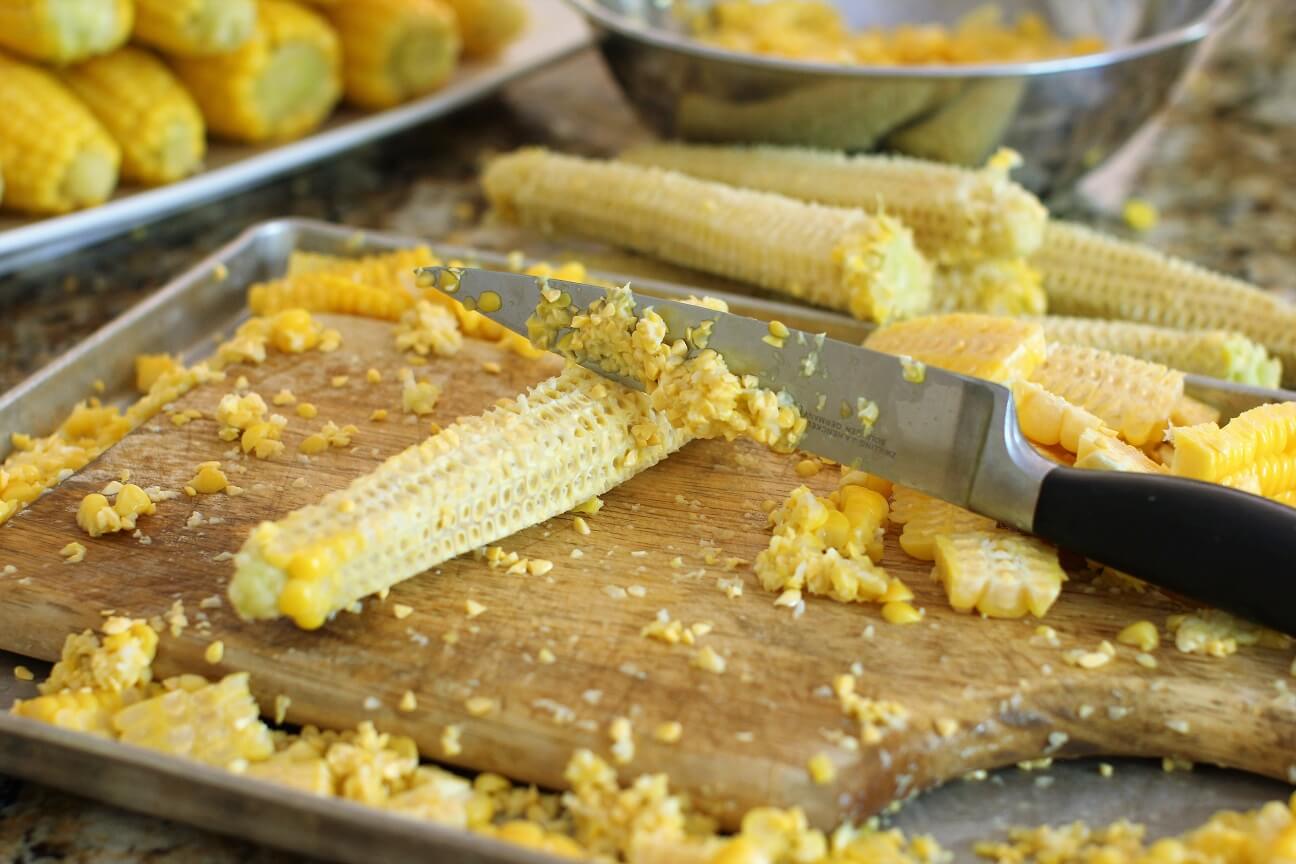 As the pan fills up, scoop the cut corn and pulp into a large bowl.

Continue until all the corn is cut. Use your hands to gently squeeze the corn kernels in the bowl and break up any large chunks of kernels that are still stuck together. 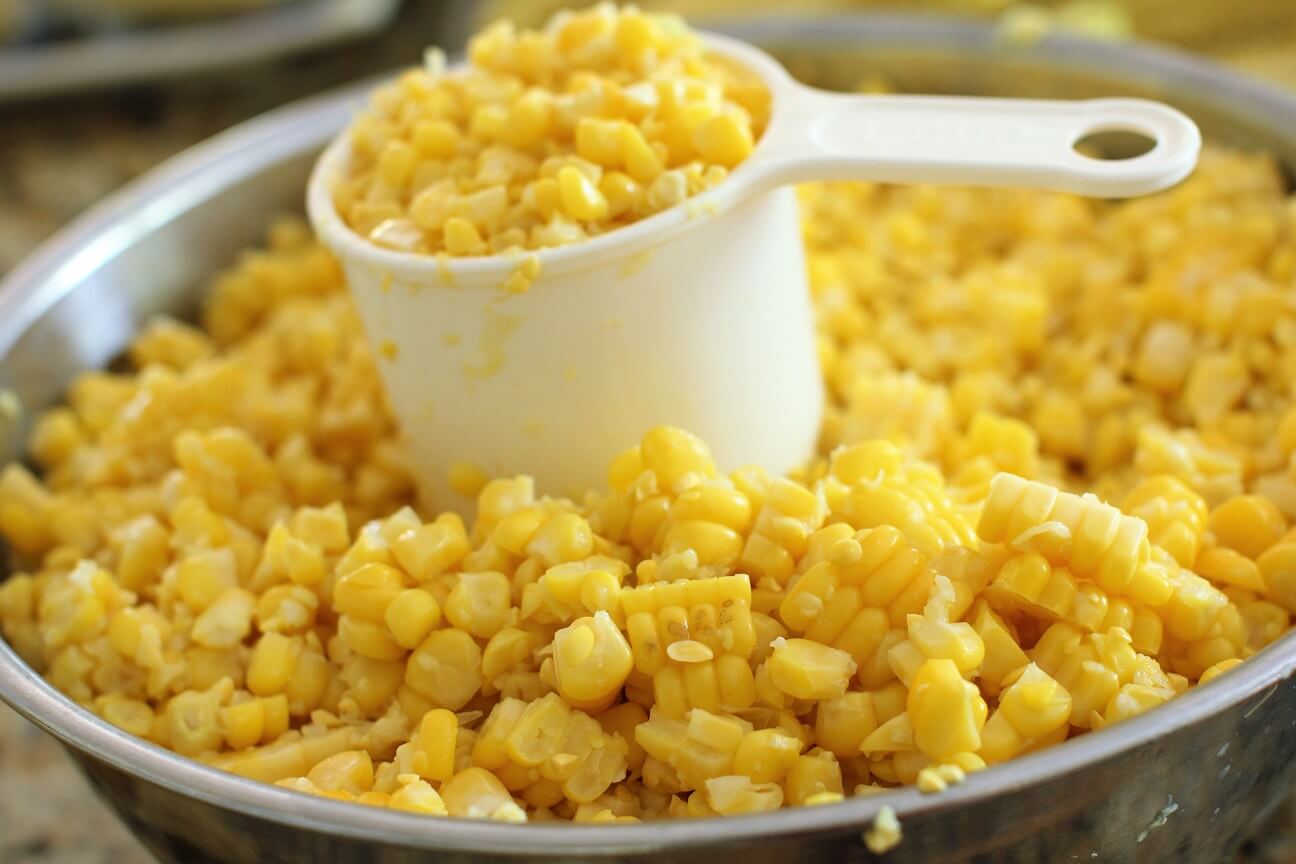 Scoop out the amount of corn that is right for your family using a measuring cup, and put it into plastic freezer bags. Try to get as little corn on the inside tops of the bags as possible, as the cut corn is quite sticky with natural sugars. Shake the corn to the bottoms of the bags, squeeze out excess air, and seal them (close the zip top or use twist ties if there's no zip top). 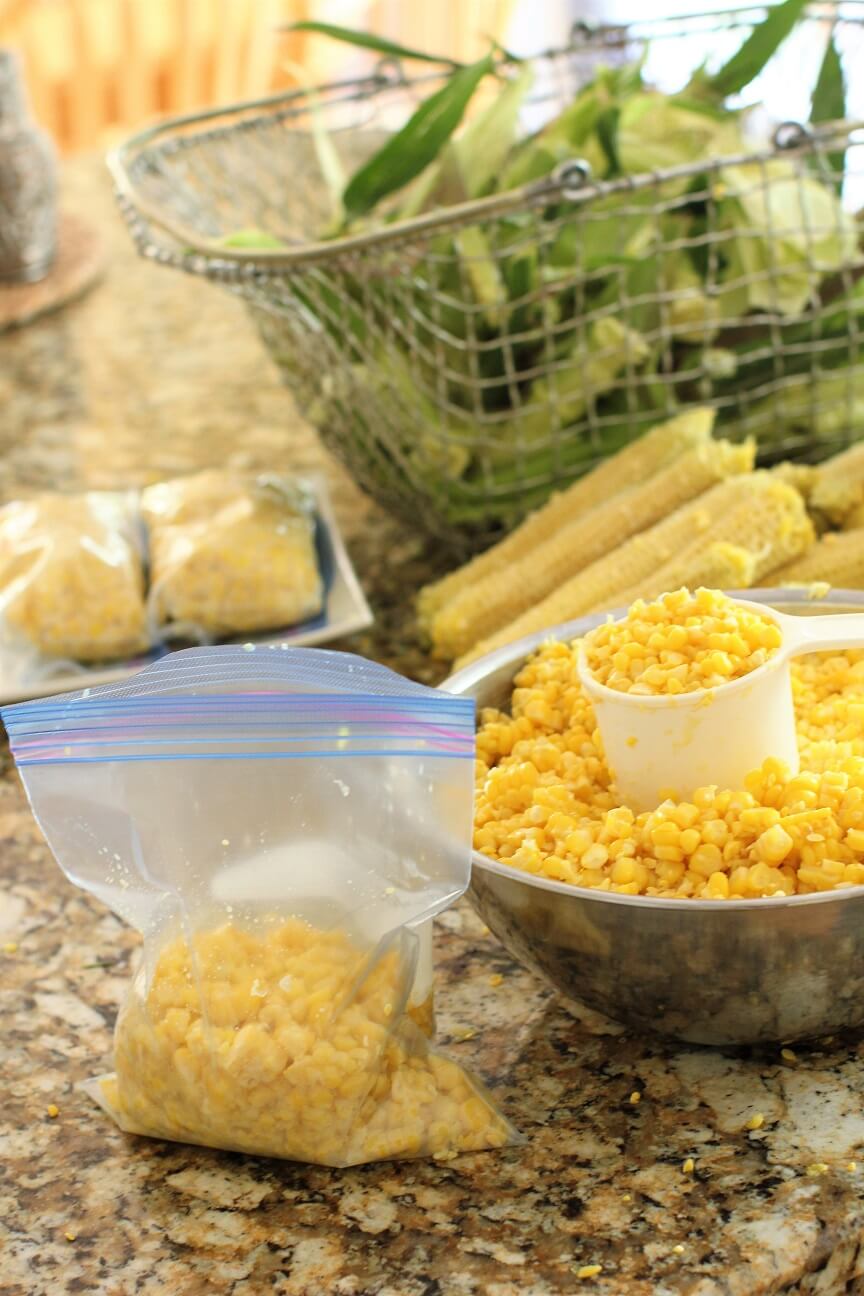 Freeze the bags. If you've done a good job of removing excess air, the corn will be good in the freezer for up to a year.

Alternately, if you have a small amount of corn and wish to freeze the kernels loose so you can remove the desired amount when needed, you can spread the corn kernels in a thin layer onto parchment paper lined baking sheets (with rimmed sides). Set the baking sheets into the freezer and stir the kernels every hour until they are frozen solid. Put the frozen kernels into a heavy duty zip top freezer bag and keep frozen. Remove portions of kernels as you need them. Loose kernels will keep in the freezer for up to 6 months.

To Freeze Whole Corn on the Cob

Corn can also be frozen as whole cobs. Trim the ends off the blanched and cooled corn cobs so there are no pointy bits to puncture the bag when they're frozen. Then just pop the blanched, cooled, and drained corn cobs into freezer bags (as many as needed for your family), squeeze out as much air as possible (or suck it out with a straw), seal the bags, and freeze.

To serve the corn, drop the frozen cobs into a large pot of boiling water, return to a boil, and cook for two minutes. Drain and serve (delicious served with chili butter). 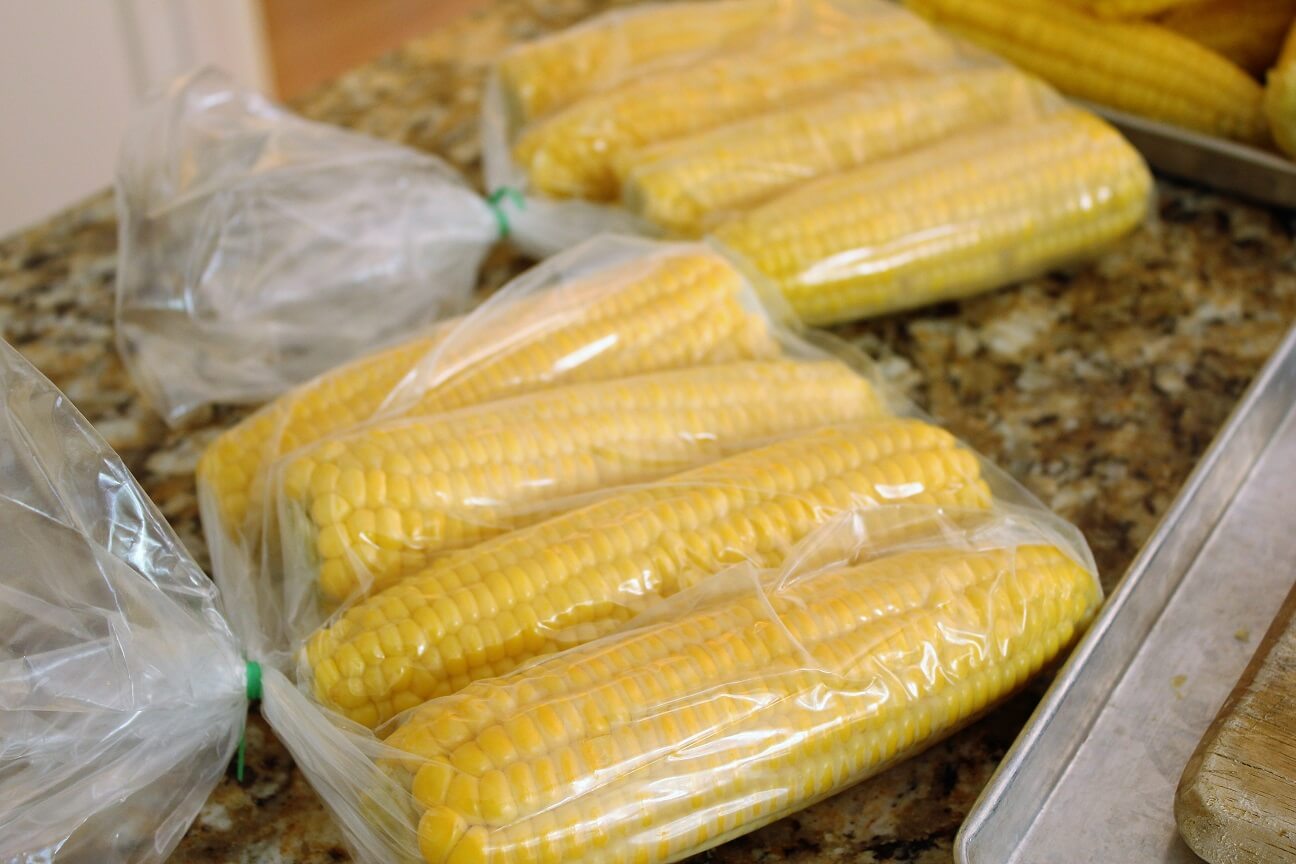 A bounty of corn ready to go into the freezer.

Guten Appetit! Enjoy the fruits of your labours this winter! 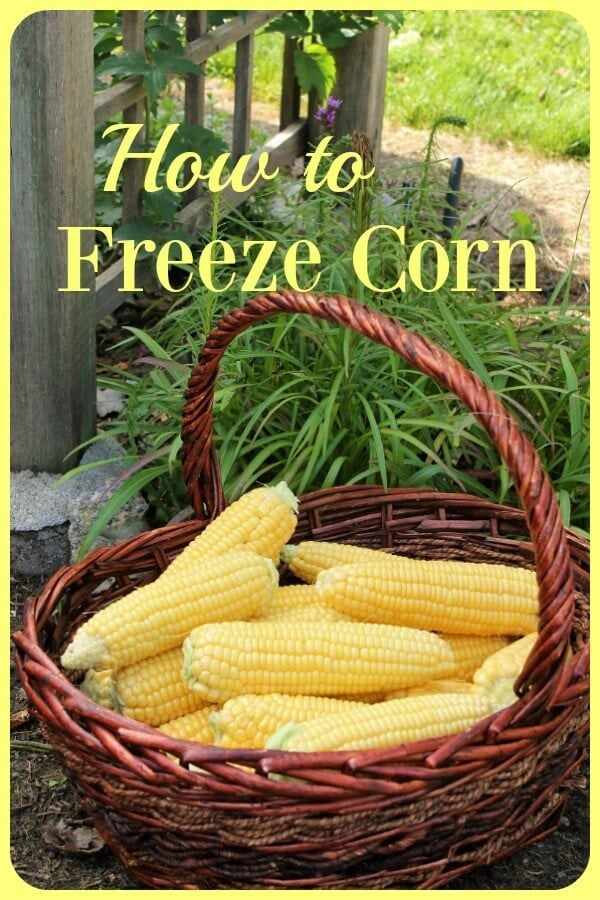 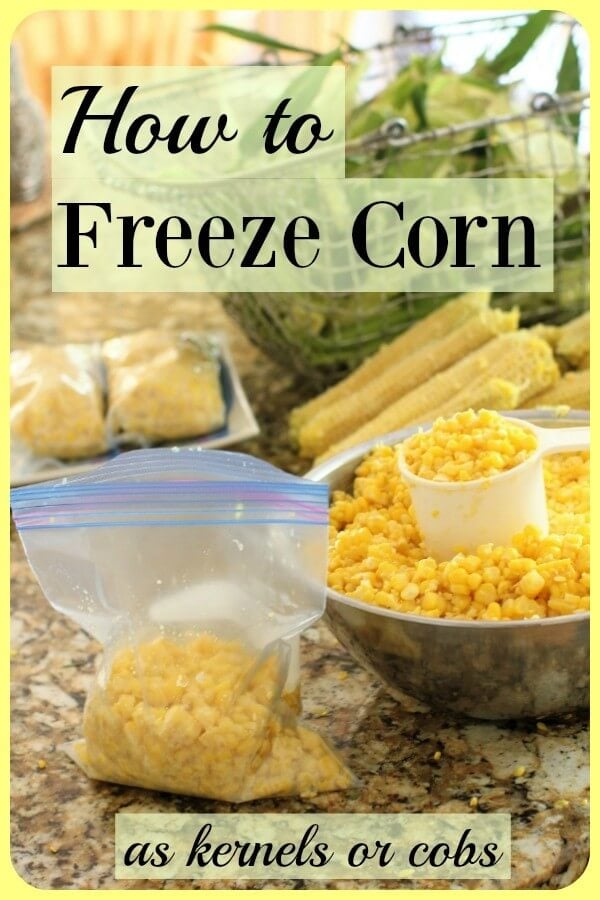