Make a batch of these irresistible ham balls ahead of time for your next party or gathering. Perfect little mouthfuls of tangy-sweetness that will be gobbled up with gusto. (Skip to recipe.) 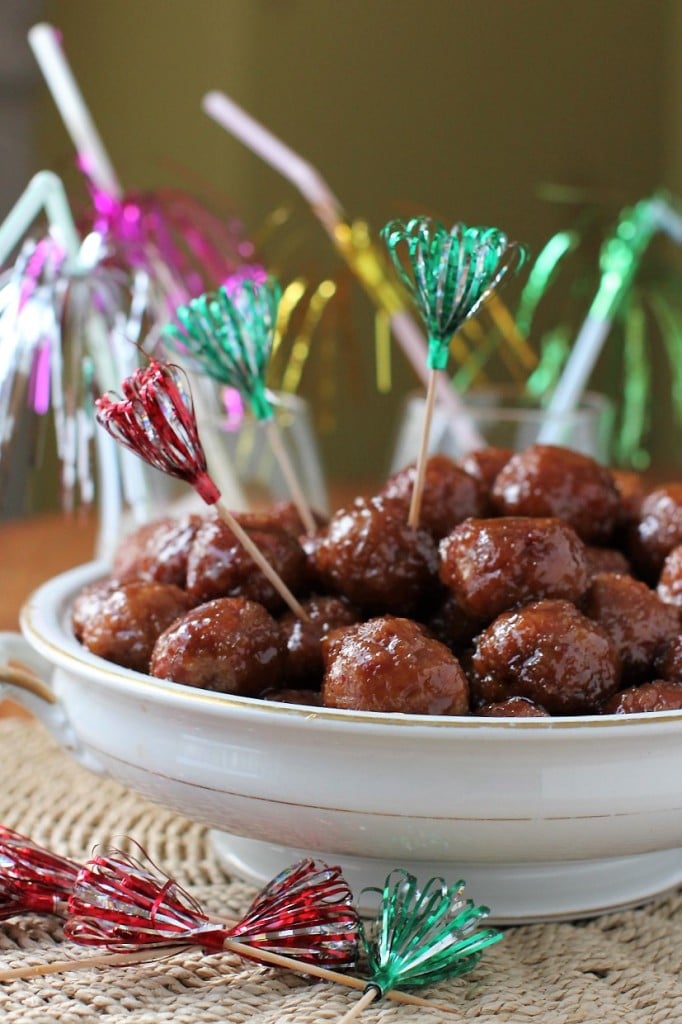 The sun is turning the snow into a field of sparkling winter crystals, the tree still glows in the living room window, and everyone is lounging in drowsy comfort in new Christmas pajamas, reading the new books Santa stuffed into stockings. It's that lovely time between the joyous festivities of Christmas and the anticipated celebration for New Year's Eve - time to take stock, count our blessings, and recharge for whatever adventures the upcoming year will bring.

Today I've been busy making a double batch of a family favourite appetizer recipe; Sweet and Sour Ham Balls. As soon as they're cooled, I'll tuck the container of ham balls into the fridge downstairs and pull them out on New Year's Eve. They freeze equally well, so if I had been more organized, I could be reading my own new books today, and just have pulled out a container of these to defrost when we needed them. 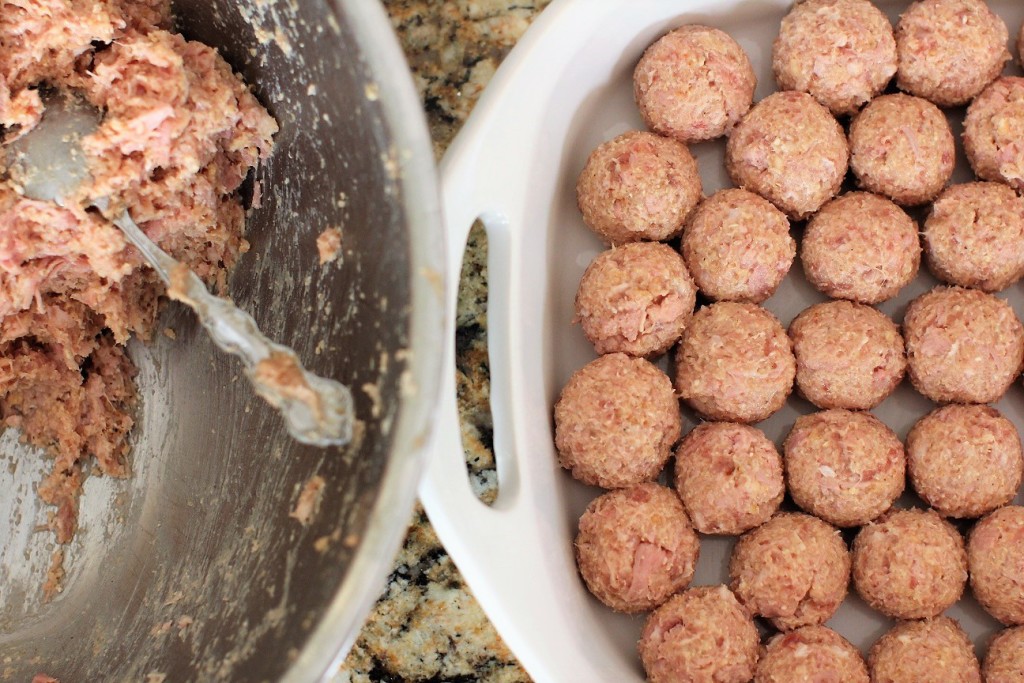 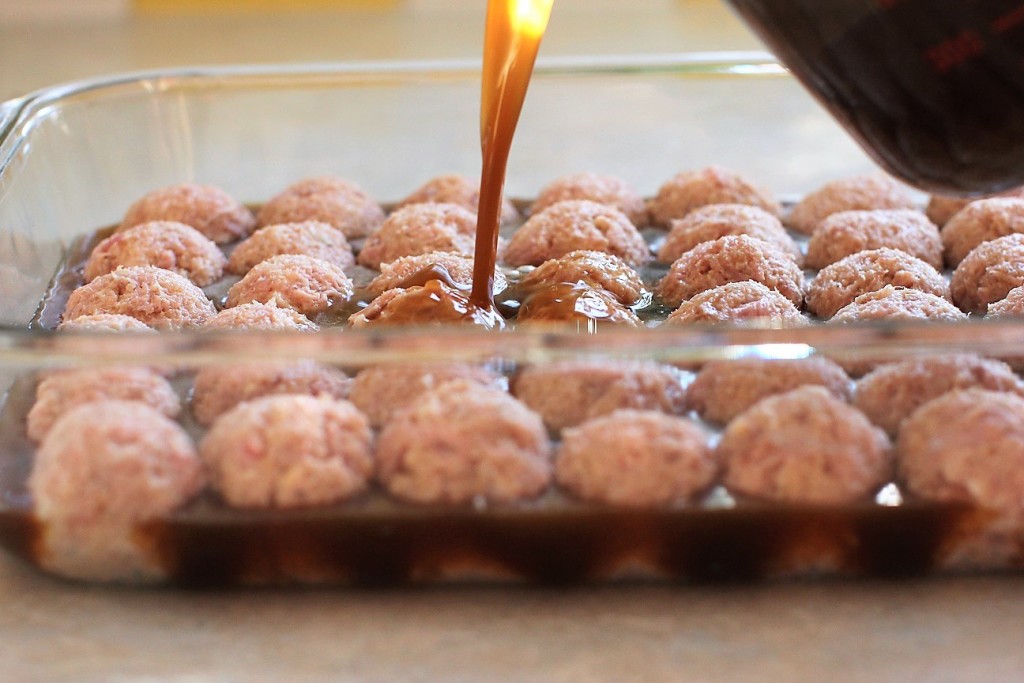 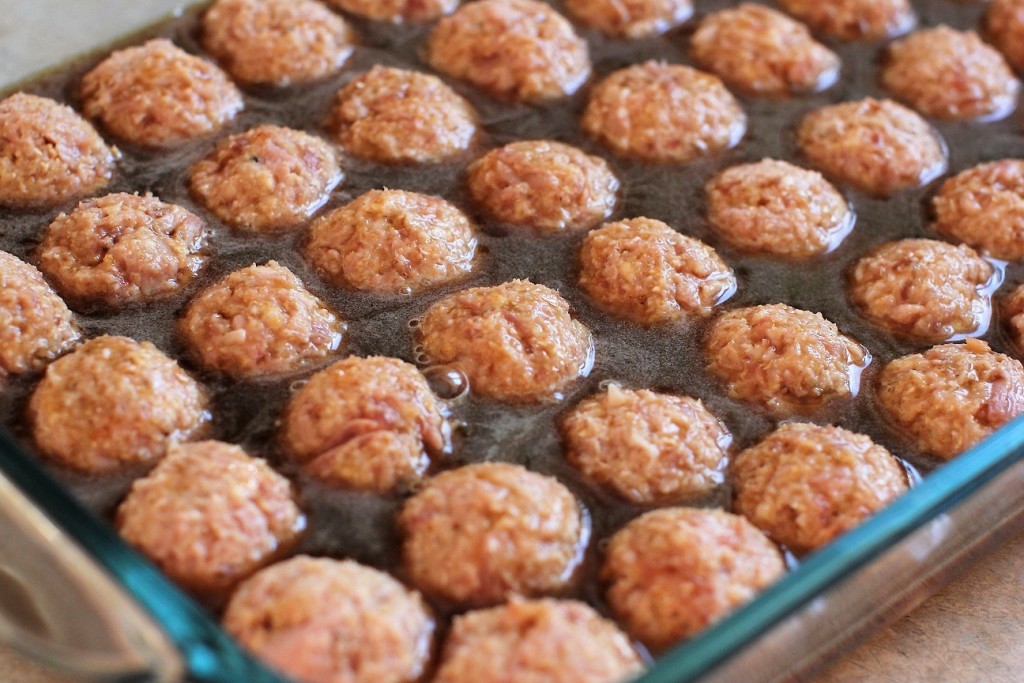 This is one of those deliciously retro recipes that has stood the test of time and is now begging for a come-back. It's from my best friend Judy's mom - from when we were still in high school (a few decades ago!). Judy's dad was the commanding officer of the army base outside our small northern town (Beaverlodge, Alberta) and I used to think it was such a treat to stay at her house. Judy's mom hosted glamourous cocktail parties, and her home and lifestyle seemed so elegant compared to our large, sometimes chaotic, sometimes messy, and very busy home on a working farm. I loved going to Judy's house to get a glimpse into such a different world than mine. 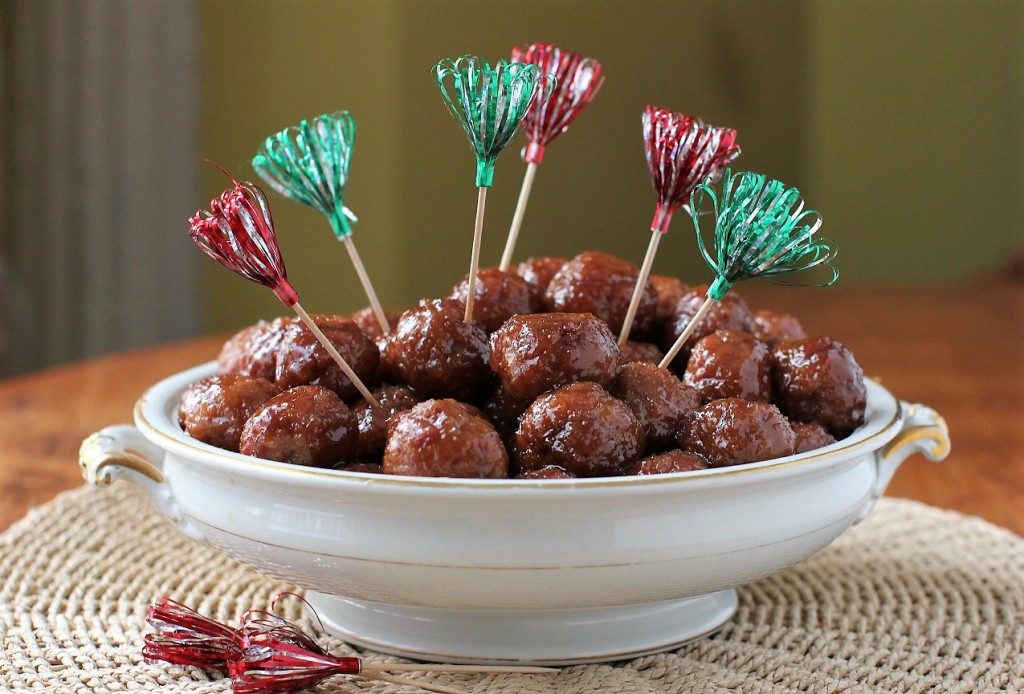 I remember being for a sleepover once, on the day after her parents had hosted one of their fancy parties. Judy and I raided the kitchen, scarfing down the leftover ham balls her mom had served. To me, those little sweet and sour morsels seemed so sophisticated and elegant, nothing like I'd ever eaten at home (hearty and delicious German fare wasn't appreciated by my teenage self as much as it is now). I requested the recipe and went right home to make those little bite-sized balls. (Appetizers were one of those foods we knew were particularly fancy-schmancy.) My mom thought they were wonderful, and ham balls became a regular part of our 'special food' repertoire. I took the recipe with me when I left home and made them often over the years. In my handwritten recipe book they are titled 'Mrs. Slater's Ham Balls". 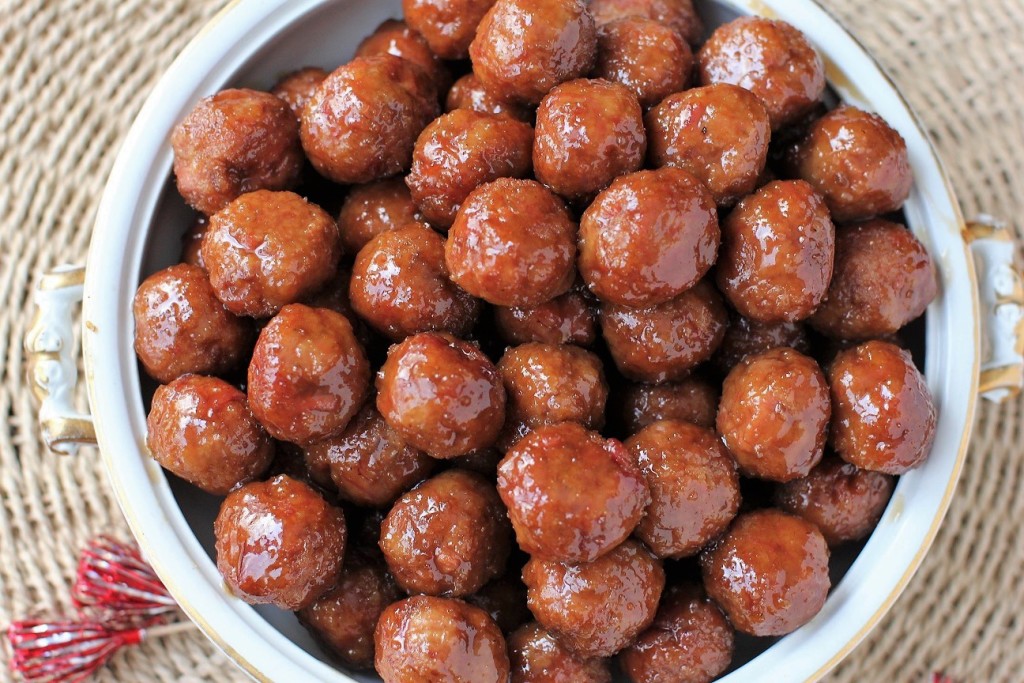 It's funny, isn't it, how our memories have a way of taking charge and making some things much more important than others? I was talking to my friend Judy a year or so ago, and mentioned her mom's ham balls and how much we love them. Judy didn't even remember them!  I'm sure that to her experience, they were just another one of the many fancy party foods her mom had prepared.

Yet to us, they had became a beloved family favourite. 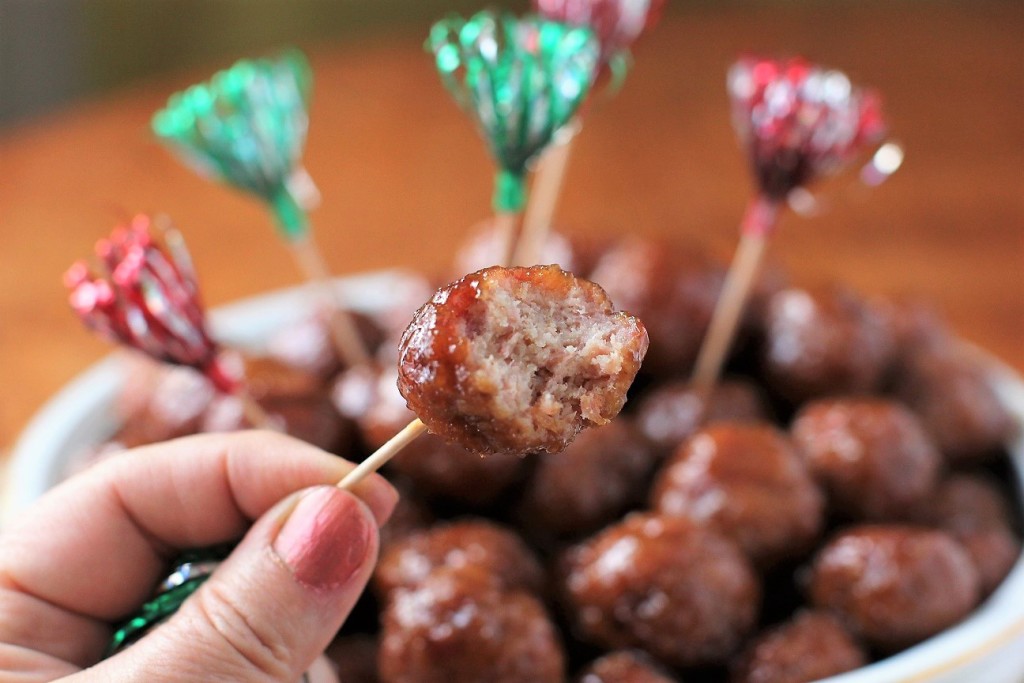 Kitchen Frau Notes: I've tweaked the recipe just a tiny bit, adding the cayenne for a bit of zip (though it's fine without it ), adding the teaspoon of cornstarch to thicken the sauce just slightly, and baking the ham balls at a slightly higher temperature and for a bit longer so the sauce reduces and the ham balls get a wonderfully caramelized exterior.

This recipe is a great way to use up leftover ham - just whiz it in the food processor until it's finely chopped.

I often use canned ham in this recipe when I don't have leftover ham, and the ham balls are just as tasty with it. If using canned ham, you don't even have to grind it - it's soft enough that you can break it apart with your fingers to be in small bits and it mixes in well with the ground pork.

I used dark brown sugar for the batch in the photos, because that's all I had in my cupboards. If you use light brown sugar, the sauce will be a little bit lighter. 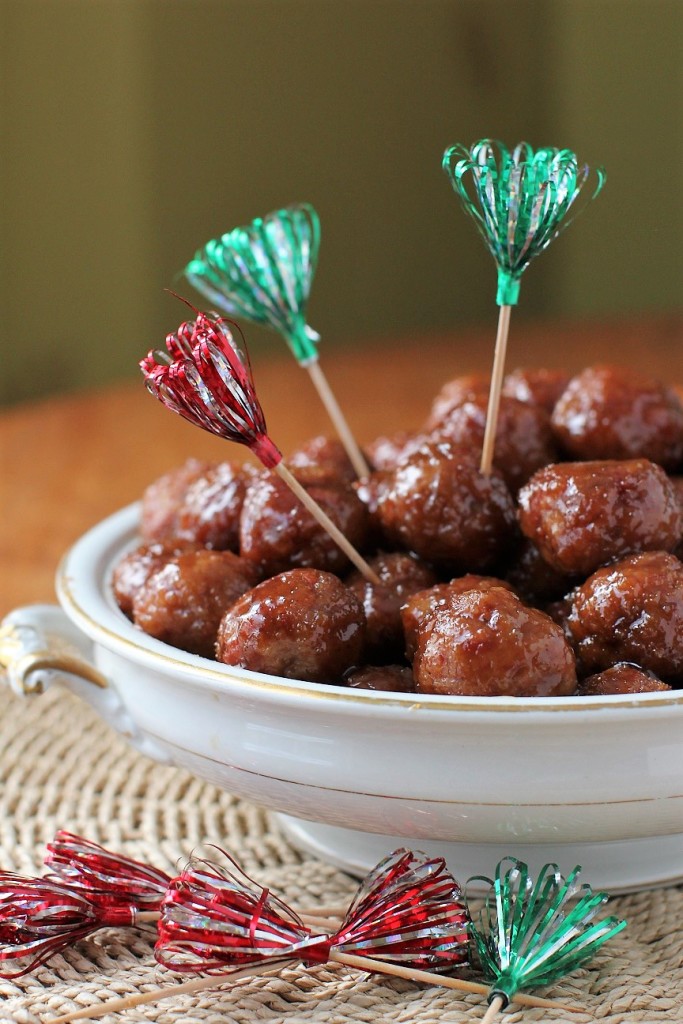 for the ham balls:

Combine the ingredients for the ham balls in a large bowl, mixing well with your hands. Let rest for 10 minutes so the crumbs can absorb the liquid in the mixture.

Mix the sauce ingredients together, whisking until the sugar is mostly dissolved and there are not small lumps of mustard powder or cornstarch remaining. Pour the sauce over the ham balls.

Pile the ham balls into a shallow bowl, drizzle with the sauce, and serve warm with cocktail picks.

*To freeze, cool completely and put the balls into freezer containers, dividing them into smaller batches if desired. Divide the sauce amongst the containers, and freeze for up to 3 months. To serve, defrost and warm in the oven or in a microwave.

Want to receive new Kitchen Frau recipes directly to your email inbox? Sign up here and you’ll get a handy and useful kitchen tip along with each recipe, too.