Bethmännchen are a traditional German Christmas cookie from the Frankfurt area. These delightfully chewy little morsels of baked marzipan are a fantastic addition to your holiday baking platter (and delicious all year long, too). Their classic shape and name have a touching story to tell. (Skip to recipe.) 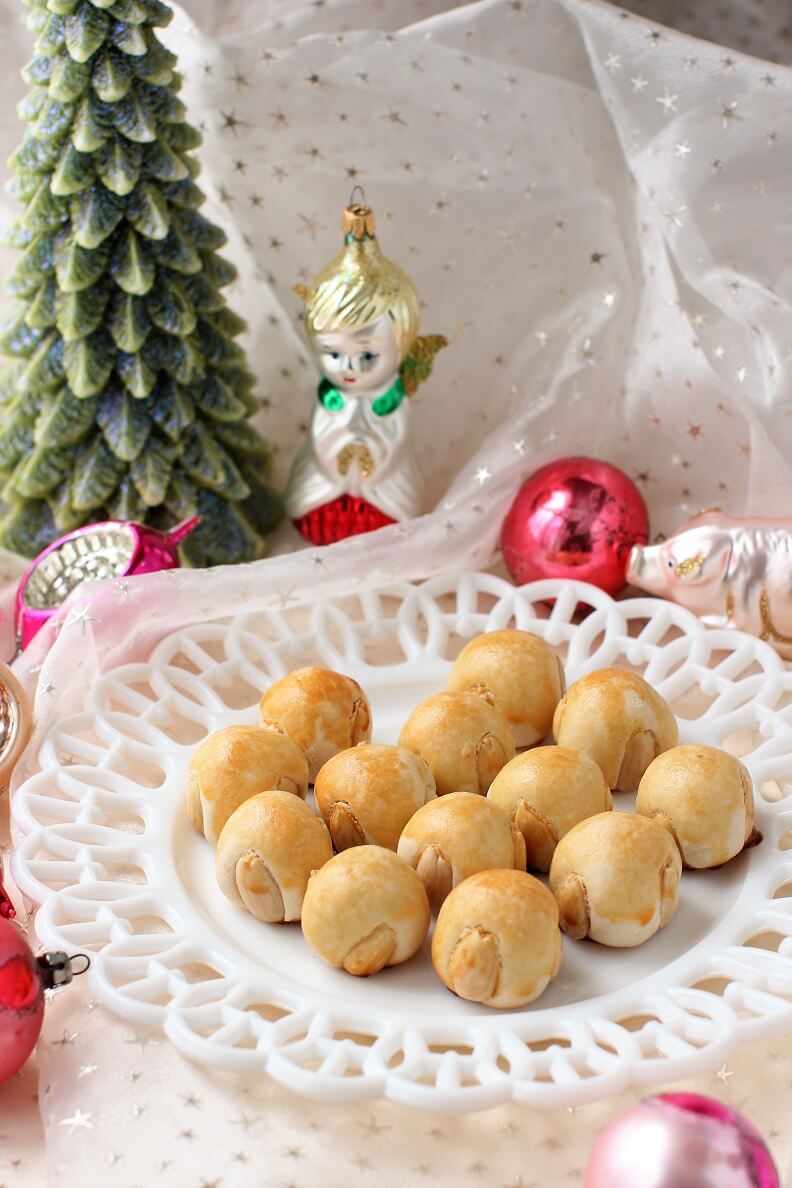 Was it only last year we celebrated Christmas in Germany? What a year it’s been since then – not one any of us could have ever in our wildest dreams imagined.

The world has shifted, and with it all the things we once believed to be. This pandemic has shaken us, from one rounded corner of the globe to the other, to the very roots of our being. As we still struggle through the depths of it, we celebrate a Christmas more isolated, more simple, and more meaningful than we have known in our whole lives.  The only thing we know for certain is that as we come through the other side of this all-encompassing wave . . . we will never look at life in the same way again. We will never take for granted again the complacency we enjoyed. Our vision and our perception have shifted ever so slightly. The things we thought important . . . aren’t. And the things we thought weren’t important . . . are. They really are.

As we celebrate this smaller, simpler Christmas, we take pleasure in the little things: the beautiful winter sunrises, the warm glow of lit candles and the quiet camaraderie of desultory conversation as we hunch together over the newest 1000-piece puzzle. We enjoy walks in the snow and mugs of hot mulled wine as we nibble Christmas cookies and mandarin oranges. We plan our small feasts, catch up on that novel we meant to read all year, and make internet calls to our families away. There is much to be grateful for.

For me, puttering in my kitchen is what brings me joy. Even if I’m not cooking for crowds this year, I find comfort and fulfillment there. I’m still baking and cooking, albeit in smaller amounts. The smells coming from this kitchen bring pleasure and the foretaste of more good things to come. We still need nourishment.

Bethmännchen, these traditional little German Christmas cookies are the latest bit of deliciousness to come out of my Christmas kitchen. Their name is apt. It translates literally as ‘little praying men’. That feels comforting. And they taste fantastic. If you love almonds or are a fan of marzipan (martz’ i pahn), these little guys are for you. I first tasted them last Christmas when we were in Germany. We saw them everywhere in gift shops and bakeries, and they are a popular fixture in the famous Frankfurt Christmas markets. They are made simply of almonds, sugar, and egg whites, brushed with an egg yolk wash to give them a lovely golden colour. Sometimes they have a touch of rose water included, and always, three almond halves studding the outside.

Long ago in Frankfurt, the financial center of Germany, there lived a wealthy and influential banking family by the name of Bethmann. They hired a fancy pastry chef from Paris to come and be their head cook. One of the many special dishes Chef Jean Jacques Gautenier created for the Bethmanns were these lovely little Christmas cookies, consisting of a morsel of chewy marzipan (almond paste) with four almonds pressed upright around the edges, representing each of the family’s four sons, Karl, Moritz, Alexander and Heinrich. As the legend goes, Heinrich died a few years later, and the heartbroken family removed one of the almonds from the cookie. Ever since, little Bethmännchen have been made with three almonds.

Now whether this story is completely true is up for debate, but the cookies somehow are more special and magical to me because of it.

And of course they taste awesomely, fantastically delicious because they’re made of marzipan, and marzipan is one of my favourite flavours. Growing up, marzipan was one of the foods always associated with special days. For Christmas, there were always lots of delicacies made of almond paste/marzipan; chocolate-covered marzipan bars in our stockings, marzipan-stuffed Stollen, little marzipan ‘potatoes’ rolled in cocoa powder, and cookies made of marzipan (kinda like these Bethmännchen, but different shapes). For Easter, our baskets were always filled with marzipan molded into colourful little fruit and animal shapes. And for other special occasions, cakes and pastries filled with marzipan took pride of place on the table. Marzipan, for me, means celebration and lovely times together with family.

These little Bethmännchen have a most delightful texture; firm on the outside and wonderfully chewy on the inside, with that crunch from the almonds punctuating each mouthful. The almond flavour is front and center, a truly irresistible little morsel that turns an ordinary moment special. 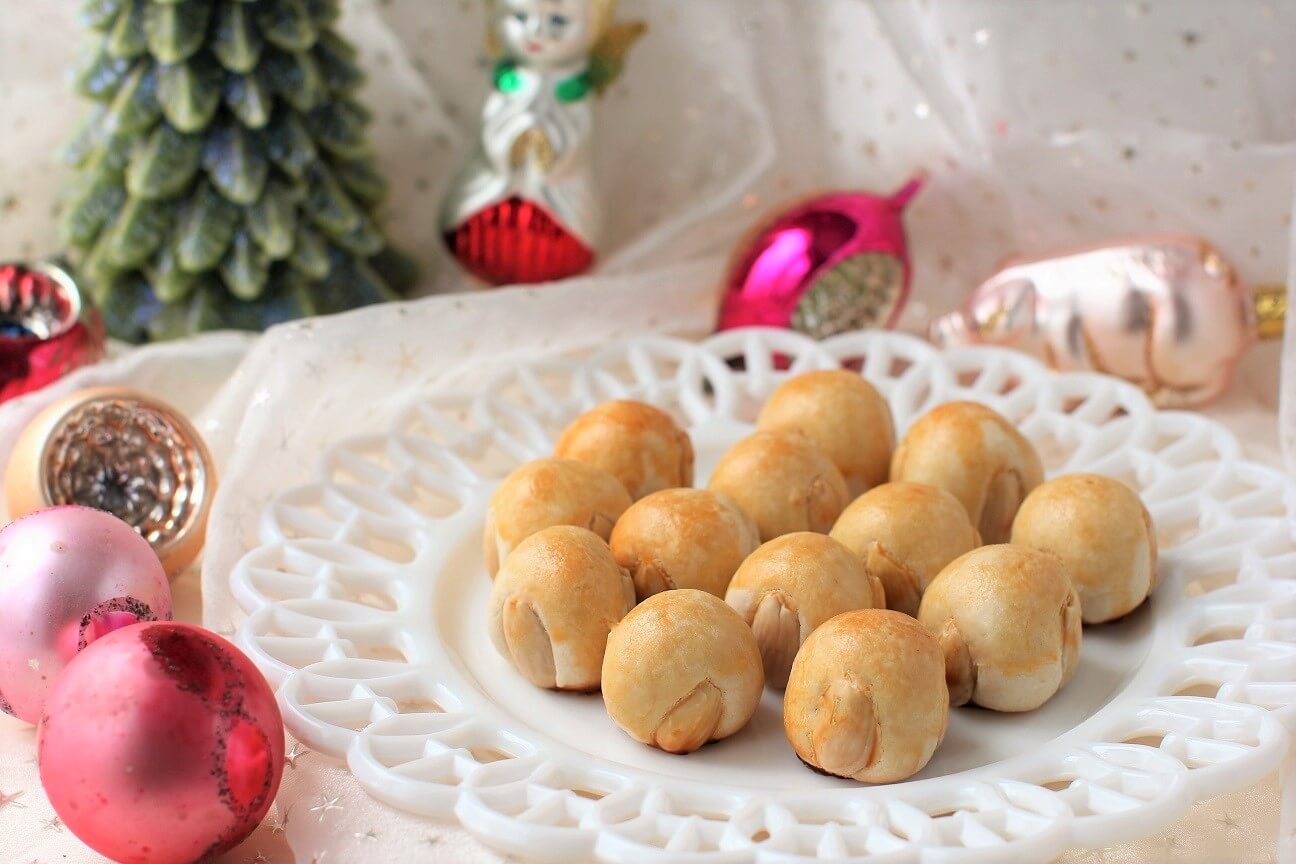 Before you start, split the almonds in half. It’s easier to do if you briefly warm them first.

Hold the almond upright on its side between your thumb and forefinger and with a sharp knife cut the nut in half along its natural seam to split it into its two halves. 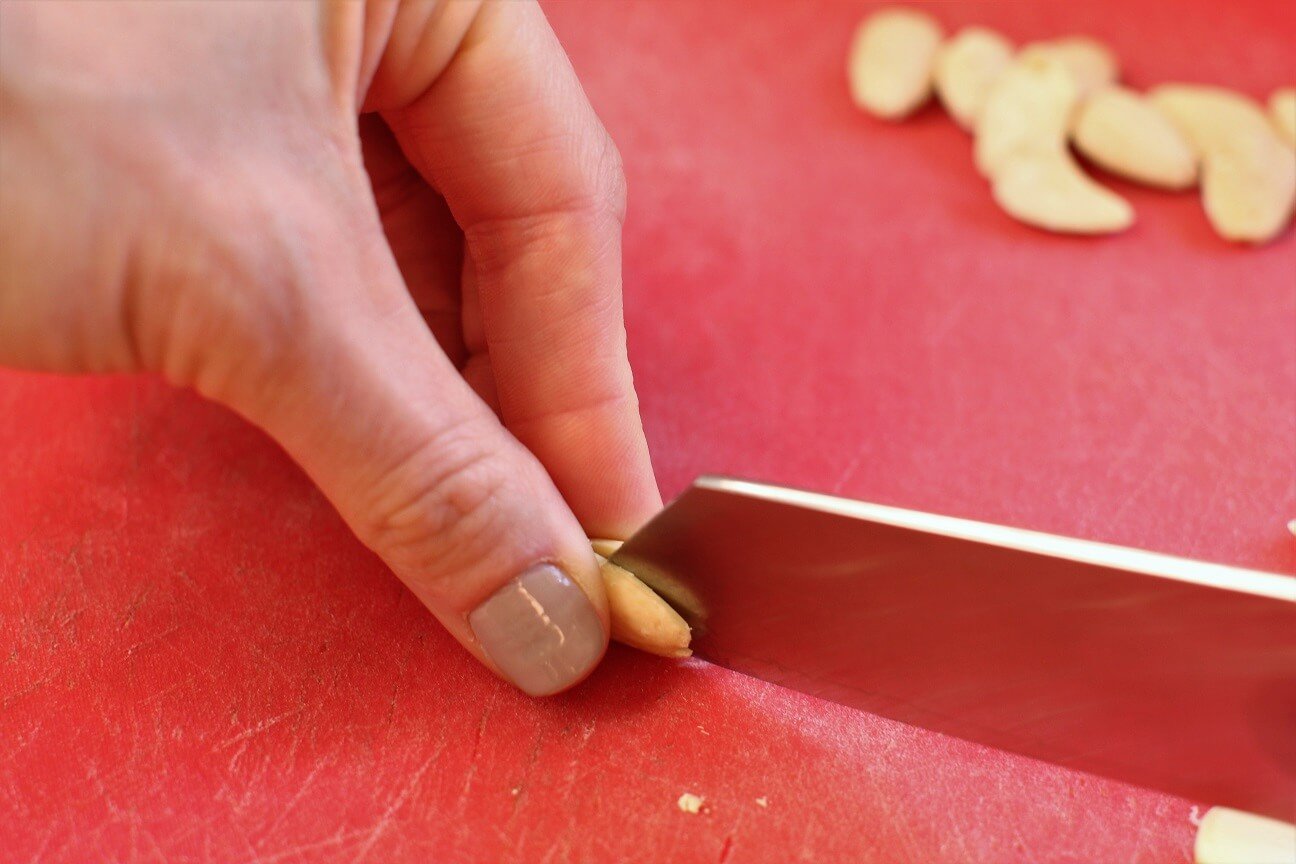 (thanks, Amanda, for being my willing hand model)

Just five ingredients combine to make a simple dough. Dump the almond paste, icing sugar, egg white, flour (use sweet rice flour for gluten free), and almond flour into a bowl. Now use the mixer or your hands to knead it to a nice workable mass – just like playdough.

Roll it into a log, slice it into six sections, and pinch off bits to roll into small round cookies. Press three split almond halves (pointy side up) equally around the sides of each ball. Push inward on all three almonds at once to shape each cookie to be a little taller than round, almost like a little praying man.

Brush the cookies with egg yolk thinned with a bit of milk or water, and bake. 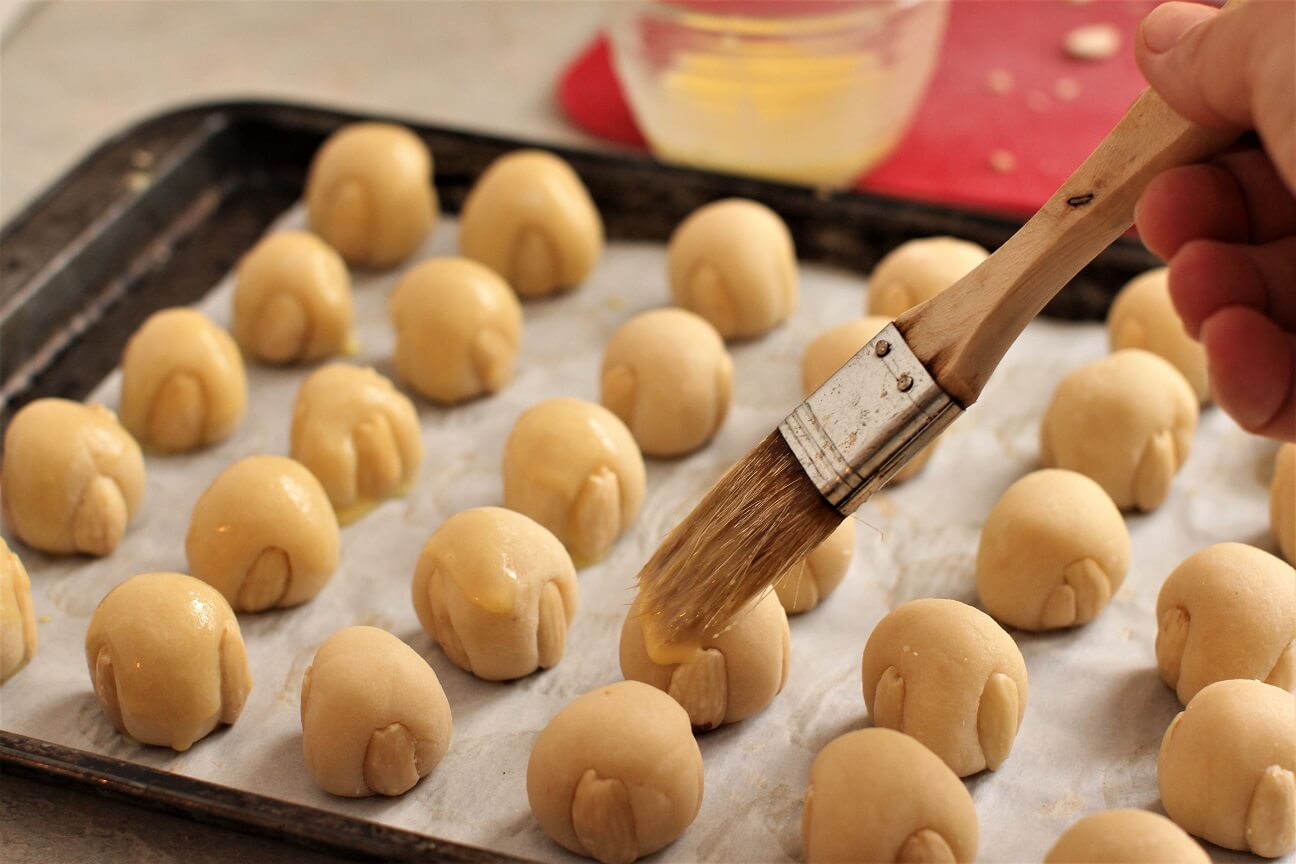 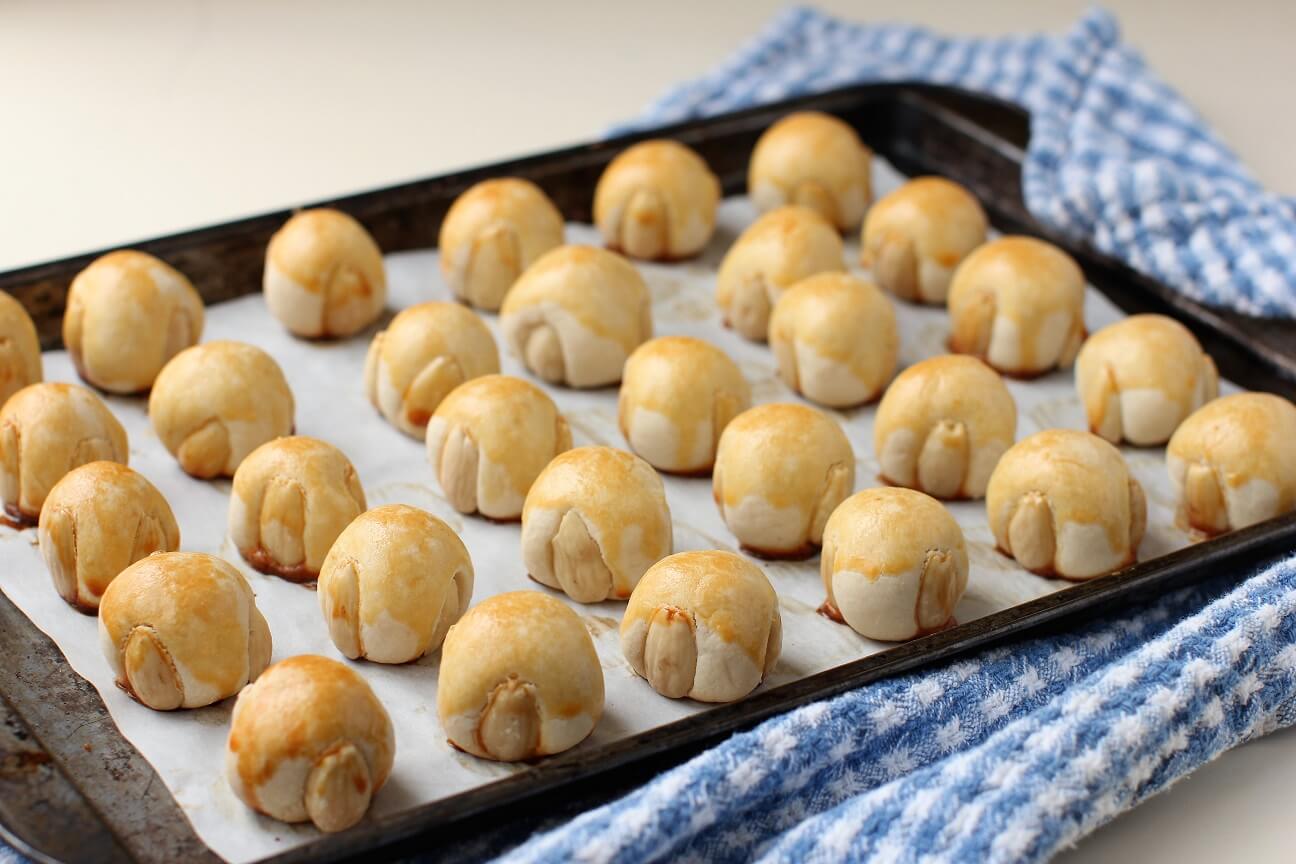 And there they are; delectable little Bethmännchen, all ready for munching with a cup of something warm and festive. 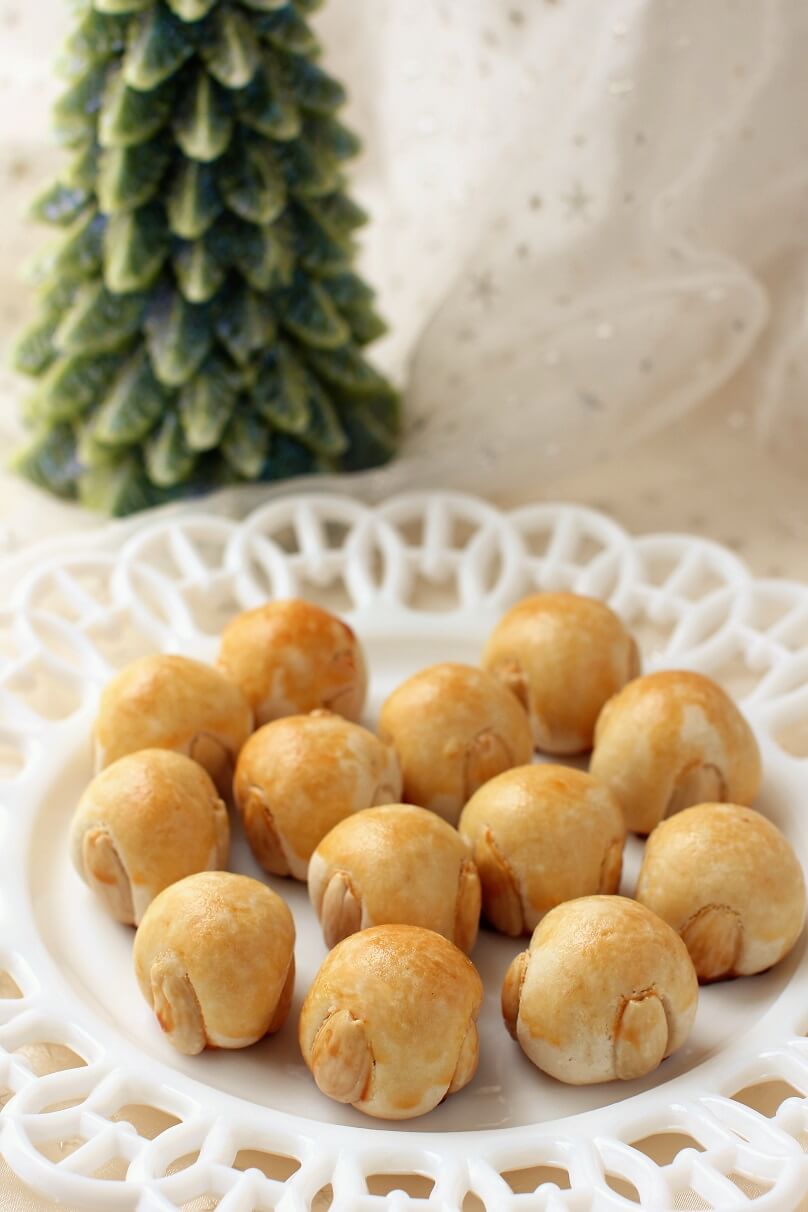 What NOT to do When Making Bethmännchen

The nomenclature for marzipan and almond paste can be confusing, as it can change according to the country you are in. The best way to differentiate is to look at the ingredients.

Almond paste and marzipan are similar, but quite different. Both are made from ground almonds, sugar, and egg whites. Almond paste is made with roughly equal amounts of almonds and sugar (or even a bit more almonds than sugar) and is somewhat coarser in texture. It is used in baking; as an ingredient or as a filling. Marzipan is almond paste that has been more finely ground and has more sugar added, so it is quite a bit sweeter. It is used for molding into shapes (like the famous marzipan fruits) or for rolling out, as in for covering cakes or fruitcakes. So just make sure that your almond paste has at least 50% almonds: if almonds are listed as the first ingredient, you know you have almond paste. If sugar is listed first, it’s probably marzipan.

If you use marzipan in this recipe, there’ll be way too much sugar and the cookies won’t hold their shape while baking. The high sugar content will cause them to melt into flattish puddles (see my photo below). So make sure it is ALMOND PASTE that you use. Almond paste is found in specialty stores, European import stores (like the Italian Center here in the Edmonton area), and some delicatessens or grocery stores. It usually comes in plastic tubes, like sausages. The almond paste I used in this recipe had almonds listed as the first ingredient (57% almonds) and sugar as the second ingredient. The marzipan I used in my failed test batch (the one that looks like sad pancakes) had sugar listed as the first ingredient – so don’t use that. Or, if that’s all you can get, add more almond flour (or sweet rice flour) until the dough is stiff enough to roll without sticking to your hands.

This is what happened when I used marzipan instead of almond paste! Yikes. 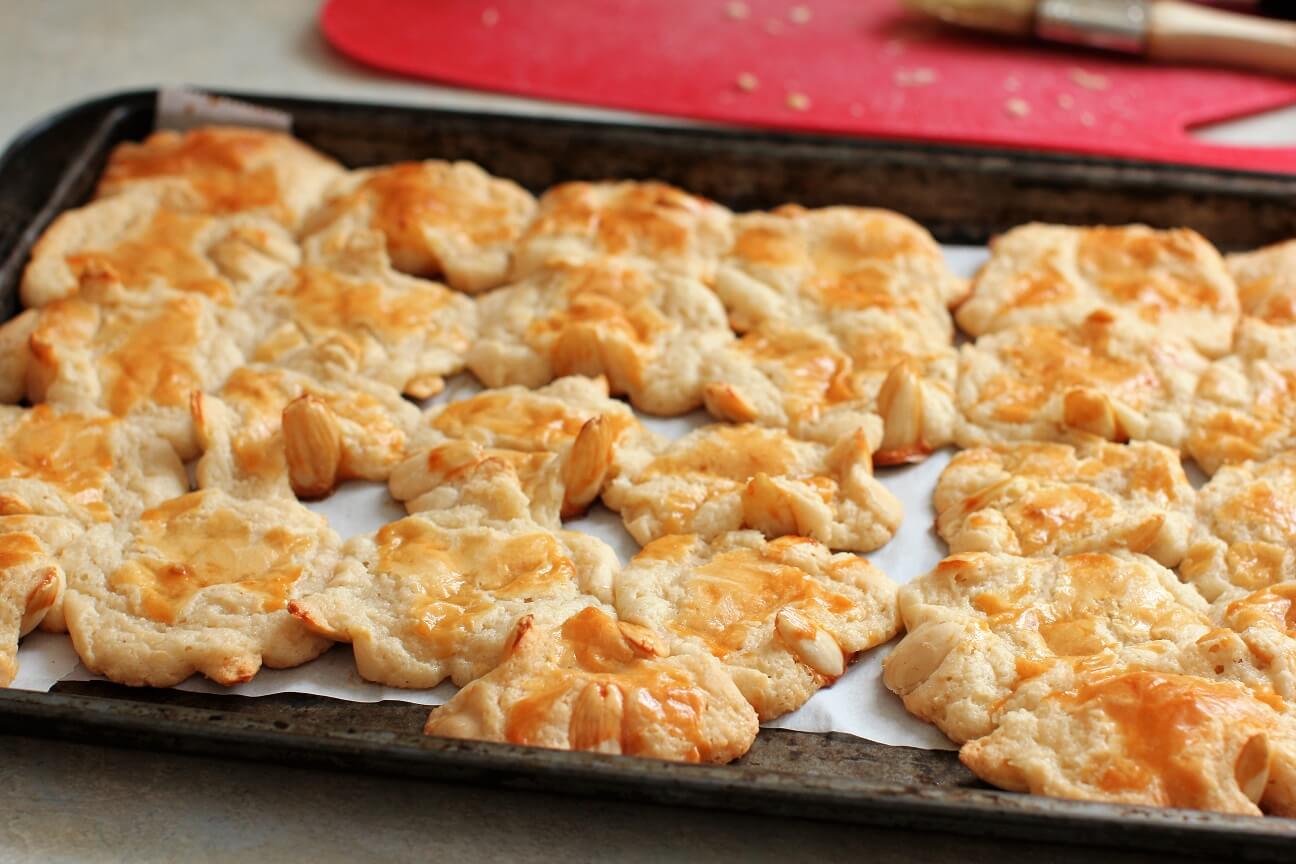 (At least my chickens were happy with their Christmas treats.)

Kitchen Frau Notes: Make sure to use almond paste instead of prepared marzipan for this cookie dough. Marzipan has a lot more added sugar, which can cause the cookies to ‘melt’, and they will be much too sweet. Make sure the first ingredient listed in your almond paste is almonds, and sugar is listed second. If you can only get marzipan, then keep adding extra almond flour until you get a nice stiff workable dough that doesn’t stick to your hands when you roll it into balls. The texture of the baked cookies will be a little less chewy and the cookies will be  a bit sweeter. 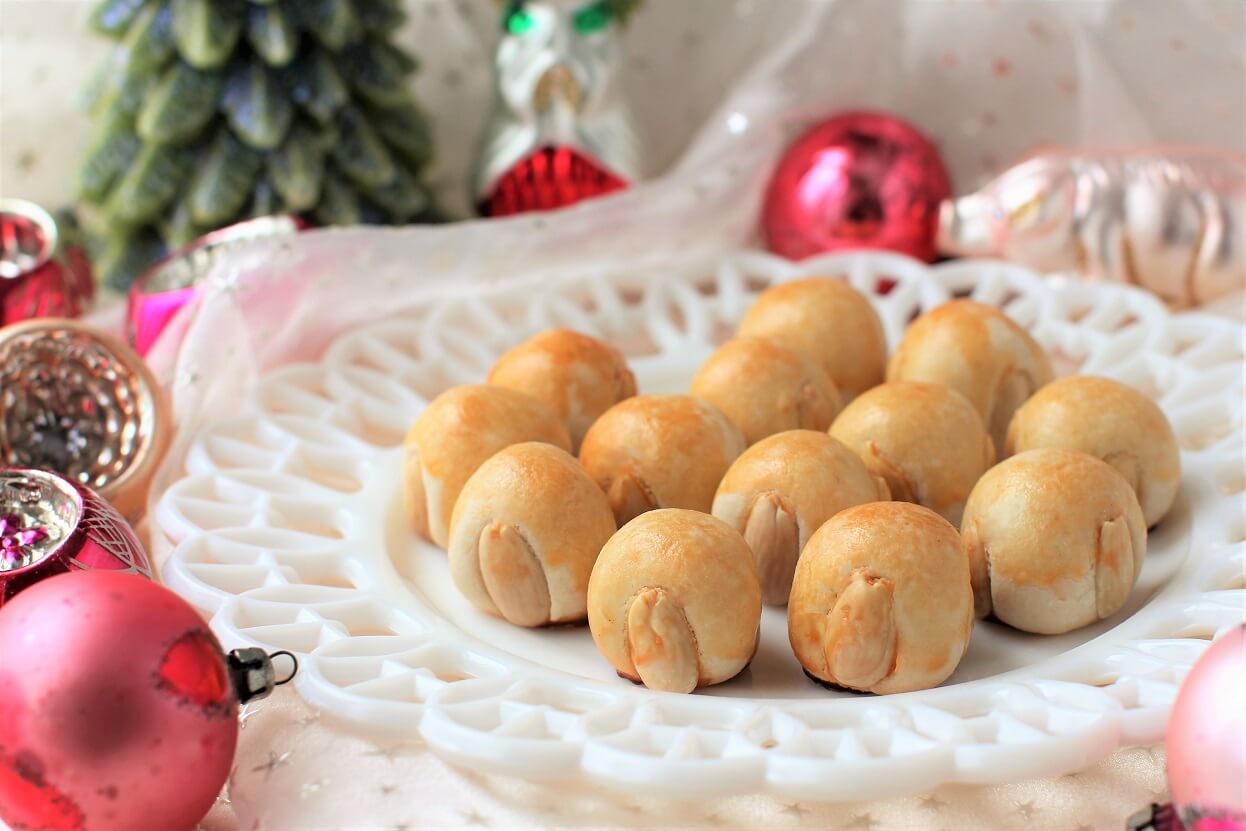 Dice or chop the almond paste into coarse chunks and put it into a mixing bowl or the bowl of a mixer. Add the icing sugar, egg white, flour, and almond flour. Mix with an electric mixer or knead by hand until it forms a cohesive mass that is stiff but still workable, like playdough.

Scrape the dough onto a work surface lightly dusted with sweet rice flour (or regular flour). Knead it together into a ball, then roll it into a cylinder. Slice the cylinder in half, then divide and cut each half into three equal pieces, to make a total of 6 even slices from the cylinder.

Pinch off pieces from each slice to make five even portions. Roll each portion into a ball.

Press three almond halves (pointy side up) into the sides of each ball, facing straight up and evenly spread out). Push in on the almond halves at the same time, forcing the ball to become a little bit taller, rather than perfectly round – a bit like a small praying man (a Bethmann).

Repeat with the other dough slices, making 5 cookies from each slice, for a total of 30 Bethmännchen. Set the cookies onto a parchment lined (or greased) cookie sheet.

With a fork, whisk together the egg yolk and cream or milk in a small bowl. Brush the top half of each cookie with the egg wash.

Bake the cookies for 25 to 30 minutes, until they get to be a nice light golden colour.

Cool on a rack. The cookies will keep in a sealed container at room temperature for 2 to 3 weeks, and will keep up to 6 months in the freezer. 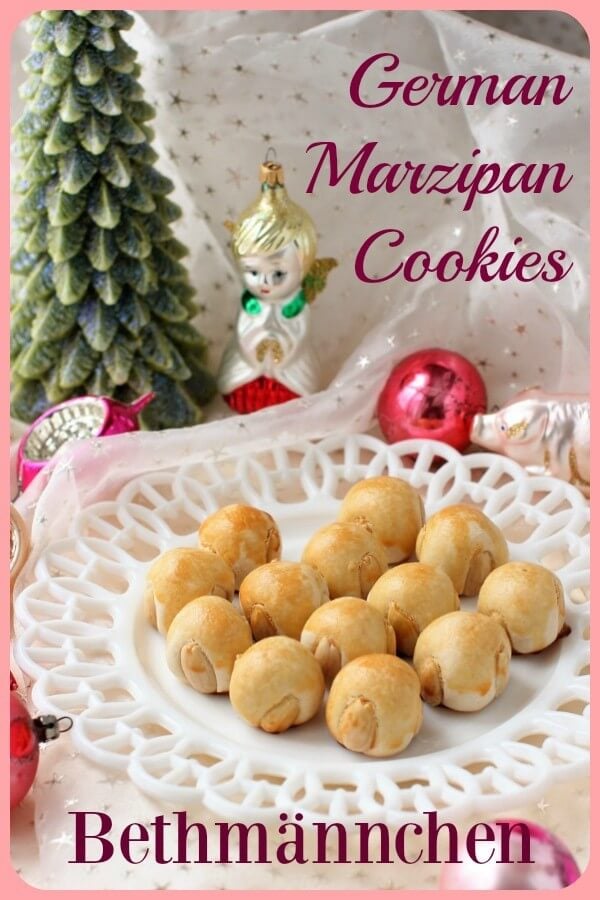