One sip of Italian hot chocolate - Cioccolata Calda - and you will be having a MOMENT. The world will slip away as you indulge in this thick, rich, dark, liquid velvet in a cup. (Skip to recipe.) 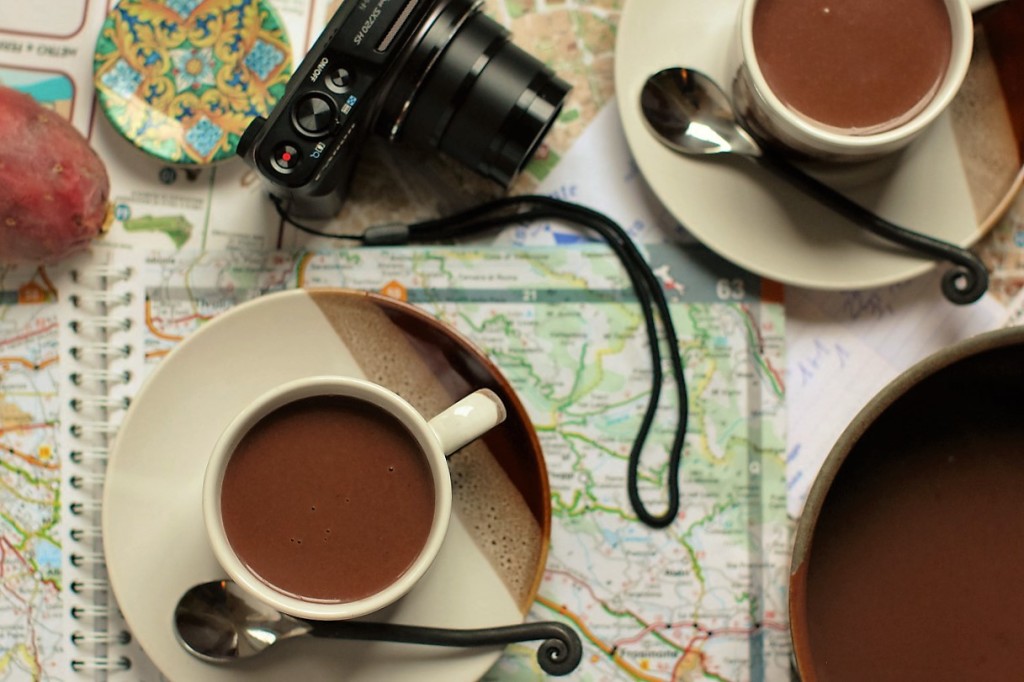 Italy is so easy to fall in love with.

We are back from three glorious weeks of eating our way around that wonderful country, and I don't even know where to start describing the adventure. We arrived in Rome and had four nights there to explore the city.

After Rome, we rented a car and drove to Sorrento where we spent another four nights exploring Naples, Pompeii, and surrounding area, then headed off down the spectaular winding road of the Amalfi coast.

My new friends, below, are kinda quiet (at the ruins of Pompeii) 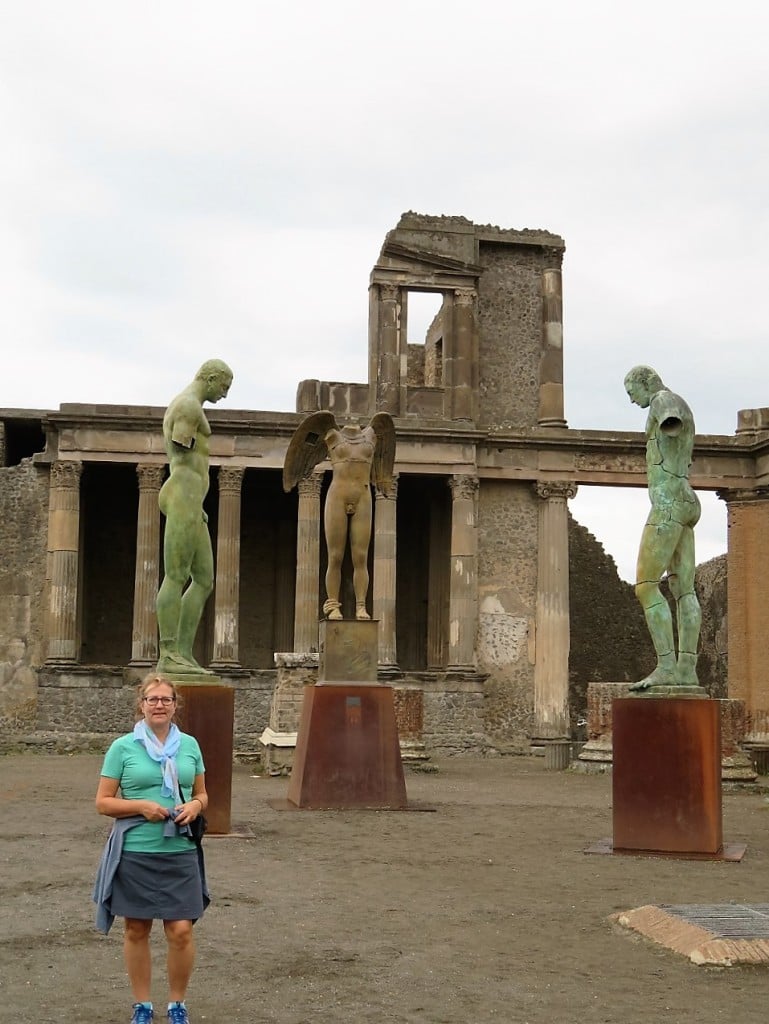 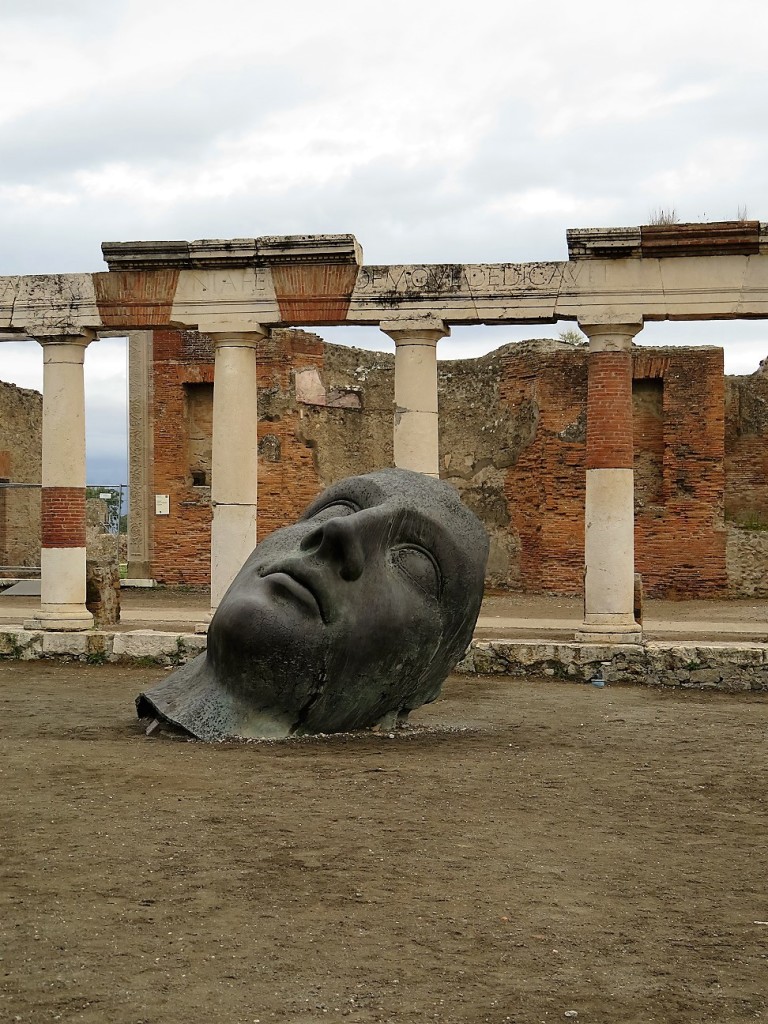 We did a loop inland to see several small towns in the 'heel' of the Italian boot, circling to the 'toe' of the boot and taking the ferry to Sicily.

We explored Sicily for a week, then headed back up the coast for a last lovely couple days in Rome.

Large cacti grew everywhere, on roadsides and in huge agricultural groves, producing sweet cactus fruits (full of prickles if you tried to pick the roadside ones - ask me how I know!) 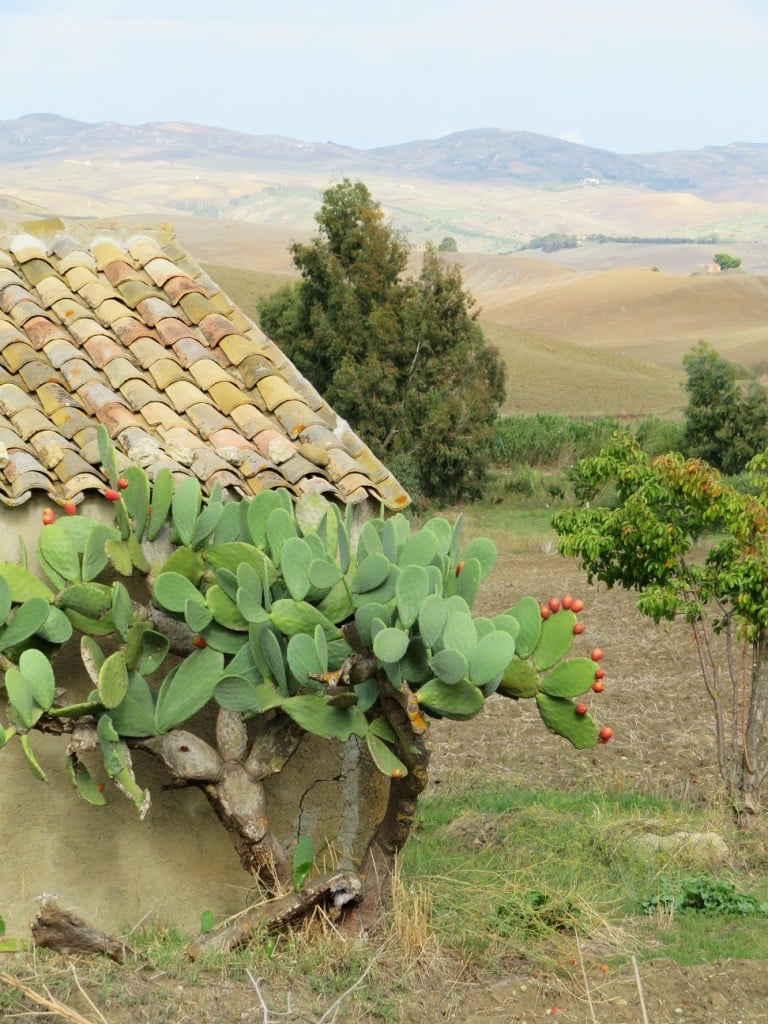 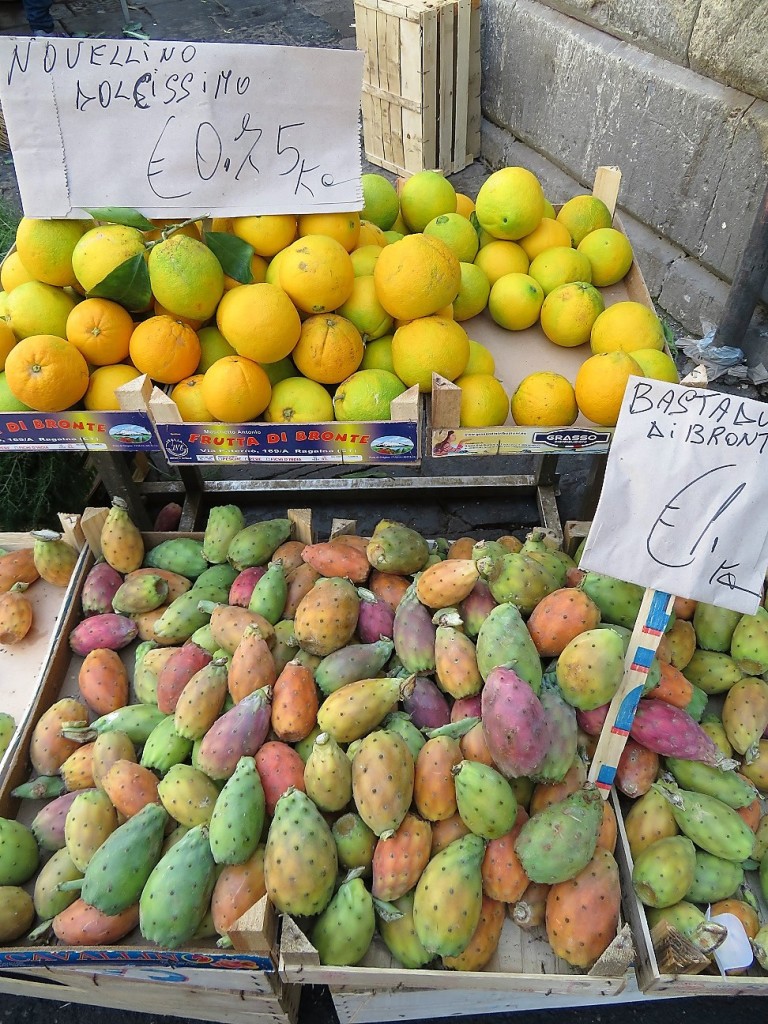 Heartfelt thanks to our Italian friends, Nicoletta and Loreto, who write the lovely blog SugarLoveSpices, for giving us many useful tips on what to see in Rome and Naples. Rosciola was a favourite stop (had the amazing pizza there twice!).

Besides fantastic fresh food, there were two things to be seen everywhere in Italy: 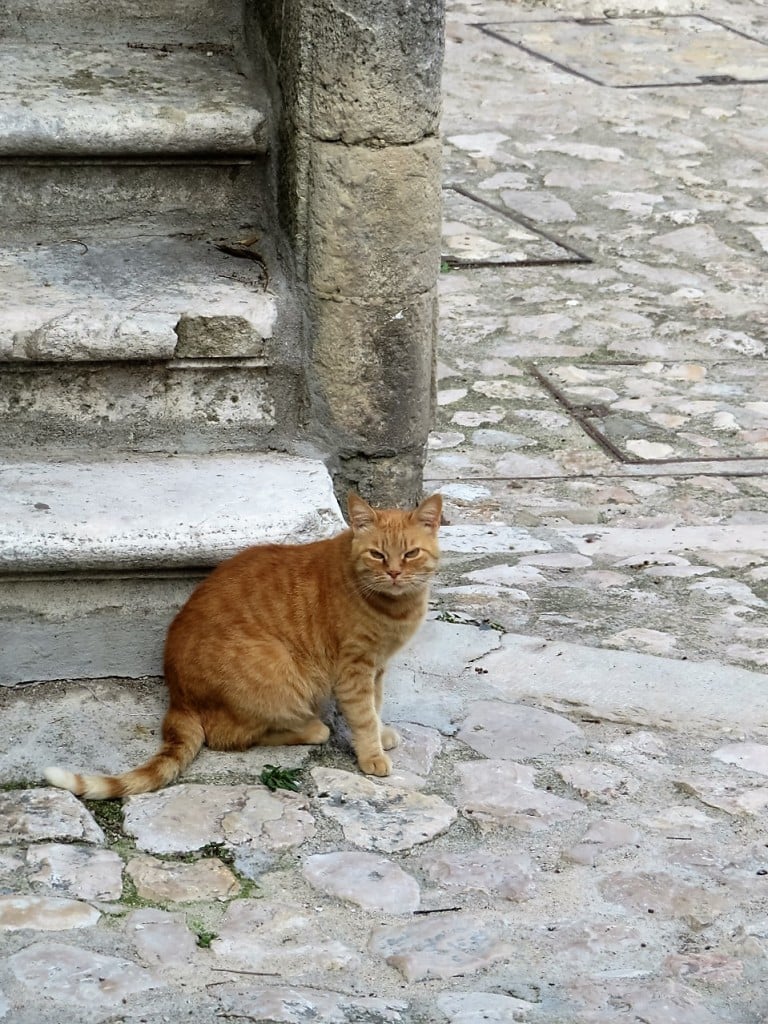 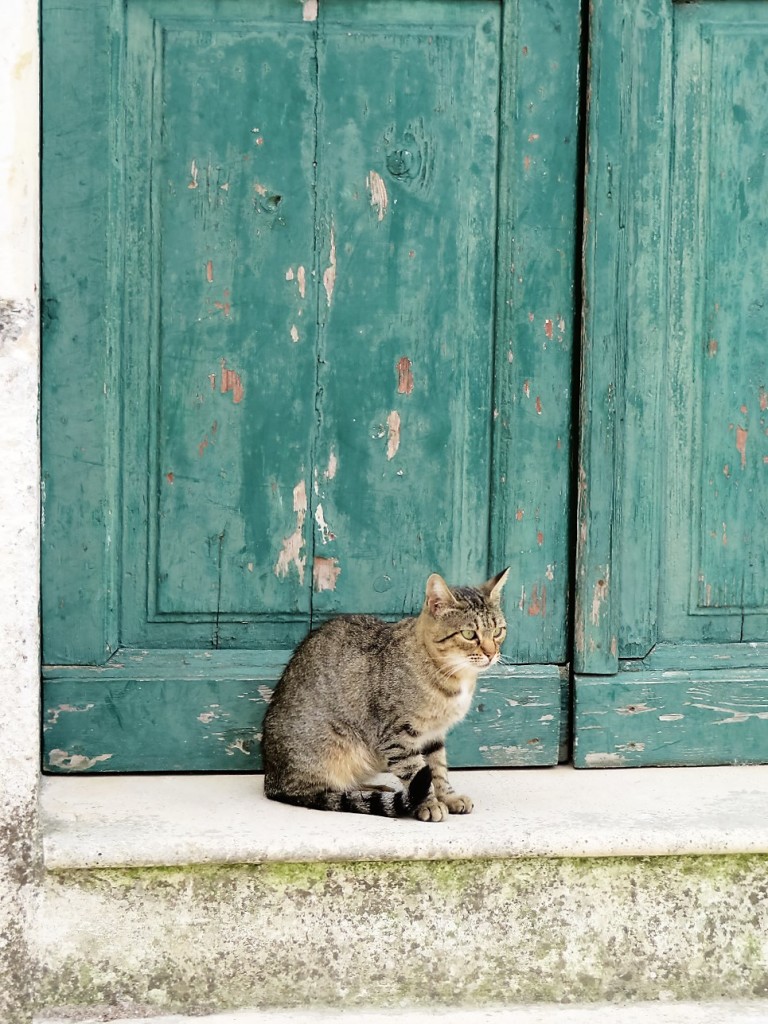 and motorcyles or scooters: 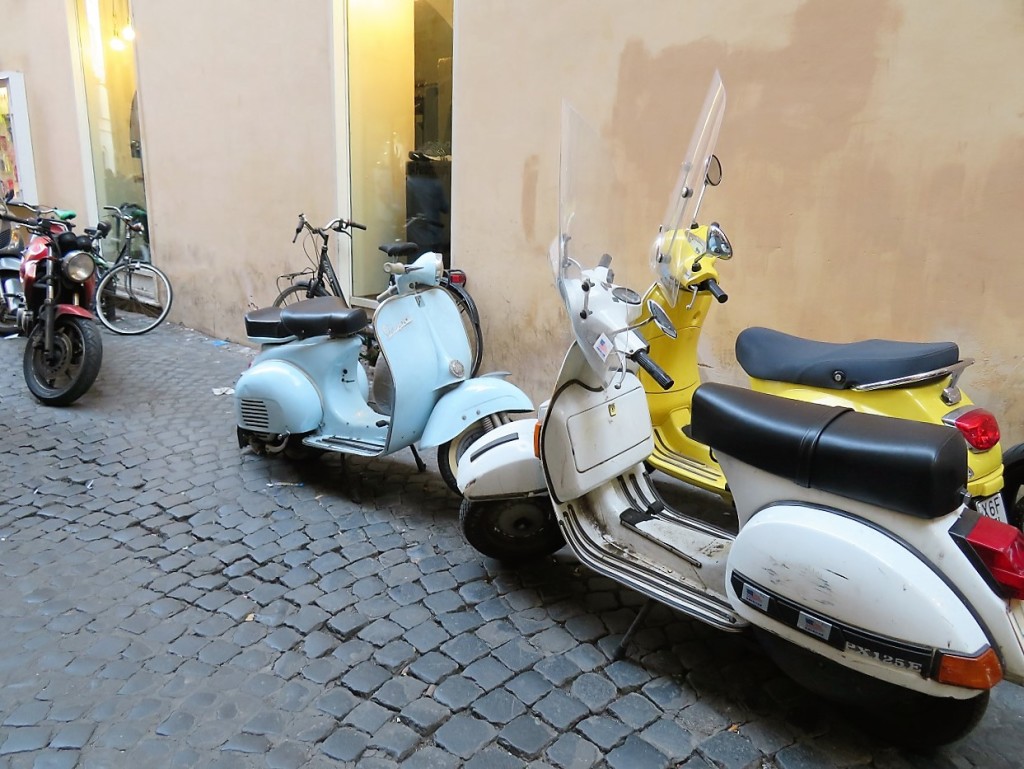 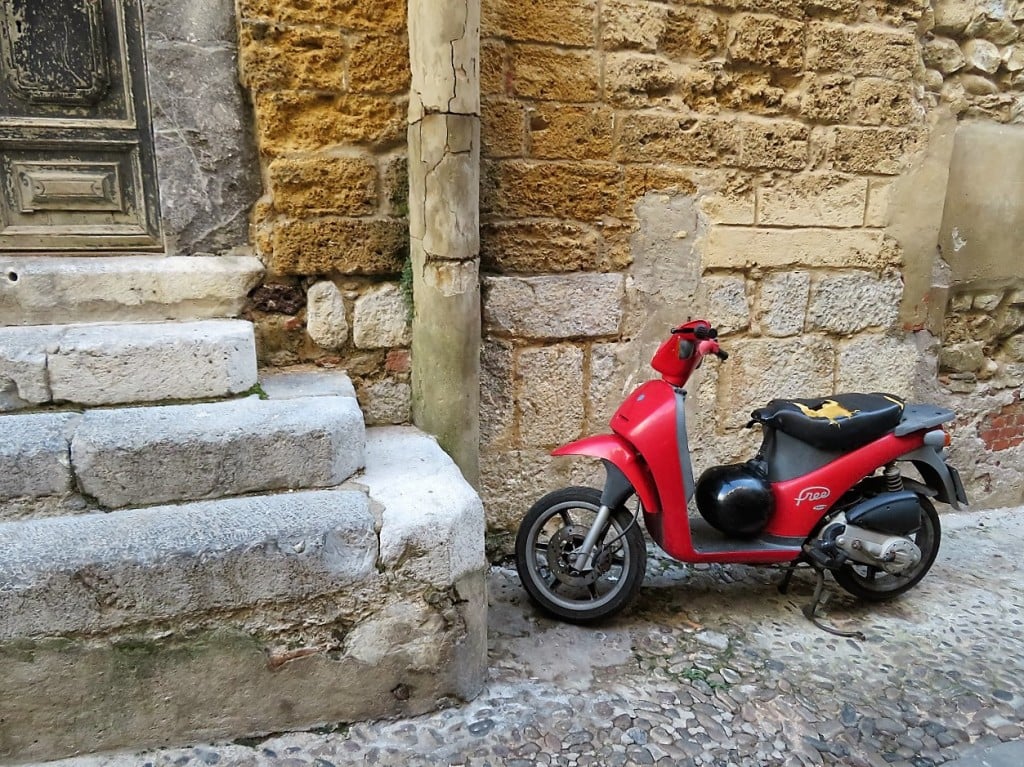 Our adventure ended with us on the express train to the airport at the exact time the devastating earthquake hit Italy, just an hour and a half out of Rome on Sunday morning. I only realized later that the bout of dizziness I had felt on the train was not just exhaustion and train jiggle, but the residual tremors that even cracked some ancient buildings in Rome, in addition to the tragic damage to several hilltowns in central Italy.

We saw and did so much on our trip, that I have just given an overview (tried to keep it short, but wasn't successful) in this post and will break our trip into smaller chunks to share separate parts of it in later posts. But to put it all into context, I need to tell you about my other love affair - the one with Cioccolata Calda (not a tall, dark, handsome Italian guy, but a deep, dark, rich Italian drink). 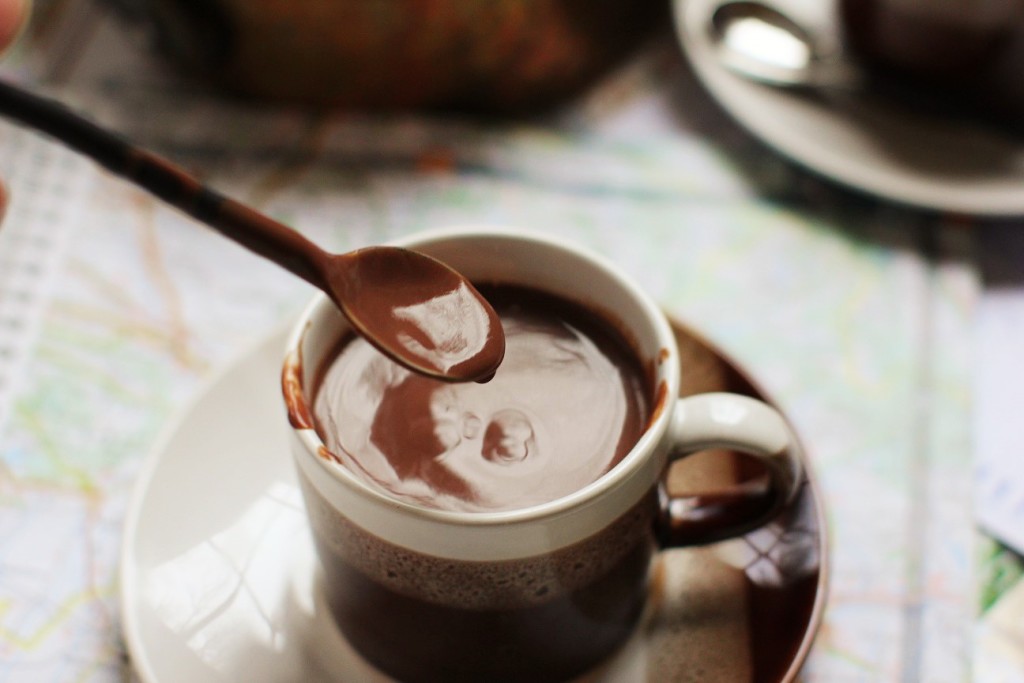 The day we arrived in Rome, bleary and exhausted from a day of travel and the night before with little sleep, it was raining. I dozed on the half hour ride in the shuttle from the airport to Termini Station, my head banging against the window. I remember opening my eyes once and looking through the rivulets of rain running down the glass to see the Colosseum as we stopped at a traffic light, but sleep sucked me back in. 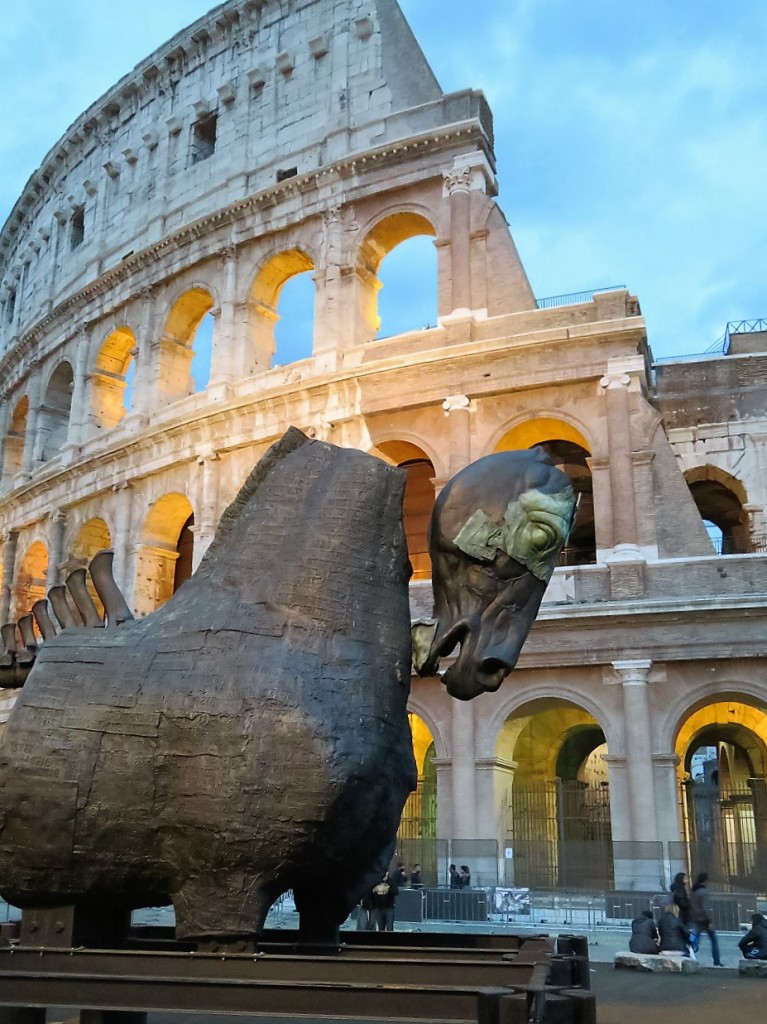 Termini Station is the main station in Rome where all buses, trains, and subways converge - a massive building spanning several city blocks and teaming with shops, people, and activity 24 hours a day. We lugged our bags across the street to check in at the hostel where we'd booked a room for our Roman stay (graffiti on the outer door and garbage bins inside the entrance courtyard not exactly welcoming in our bedraggled state, but a traipse up the worn marble stairs produced a double room with domed, painted ceiling, spare but clean furnishings, and updated private bath). We dropped off our luggage and headed back to the station to get our bearings for traveling the city and to purchase Roma Passes and Sim cards for our electronics.

Even though it was late afternoon (and the middle of the night to our internal clocks) we needed a jolt of something to stay awake. I knew if I had a coffee I'd have trouble sleeping later on, so I ordered a hot chocolate - something I don't normally care for that much, but I was chilled and tired and it was still raining out.

One sip of that thick, velvety molten chocolate decadence and I sat up straighter. This tasted nothing like the hot chocolate mix we stirred up with hot water at home. It was as if someone had melted a luxuriously rich bar of dark chocolate into a cup, and it was served with a spoon, which you needed - to scrape every last bit of that thick comforting nectar from the bottom of the cup.

Thus began my quest for more of this addictive indulgence. Our first trip to Italy eight years ago, we had a gelato every day. Well this trip, it was a Cioccolata Calda every day for me (and sometimes even twice a day). Our morning stop for cioccolata and a pastry became an anticipated routine, even on the hot days, but especially welcome on the handful of rainy days we encountered. I found the cioccolatas weren't all the same as that first one in Termini Station. I had cioccolatas that were much sweeter and had more of a milk chocolate base (still delicious), and some that were as thick as chocolate pudding, so I learned to ask for extra hot water (agua calda) on the side. Some cioccolatas had tiny bits of ground hazelnuts or pistachios in them. But all were the same deep delicious chocolate drink and all were memorable.

I brought a couple mixes home to try, but have been experimenting this week to make a drink that is the same as the best ones I had in Italy. Cocoa powder alone didn't do it. Melting in some good quality dark chocolate provided that last little touch to produce the intensely chocolaty bliss-in-a-cup I found in Italy.

So I make myself a cup, cradle its warmth in my hands, take a velvety sip and close my eyes, reliving all those wonderful Italian memories.

I know what I'll be doing often this winter when the snow outside makes me long for a dose of liquid Italian sunshine.

Kitchen Frau Notes: I love using dark chocolate (like Lindt 70%) in my Italian Hot Chocolate, but you could substitute a good quality milk chocolate to make a milder drink that would be just as delicious, and might be more popular with kids or milk chocolate lovers. 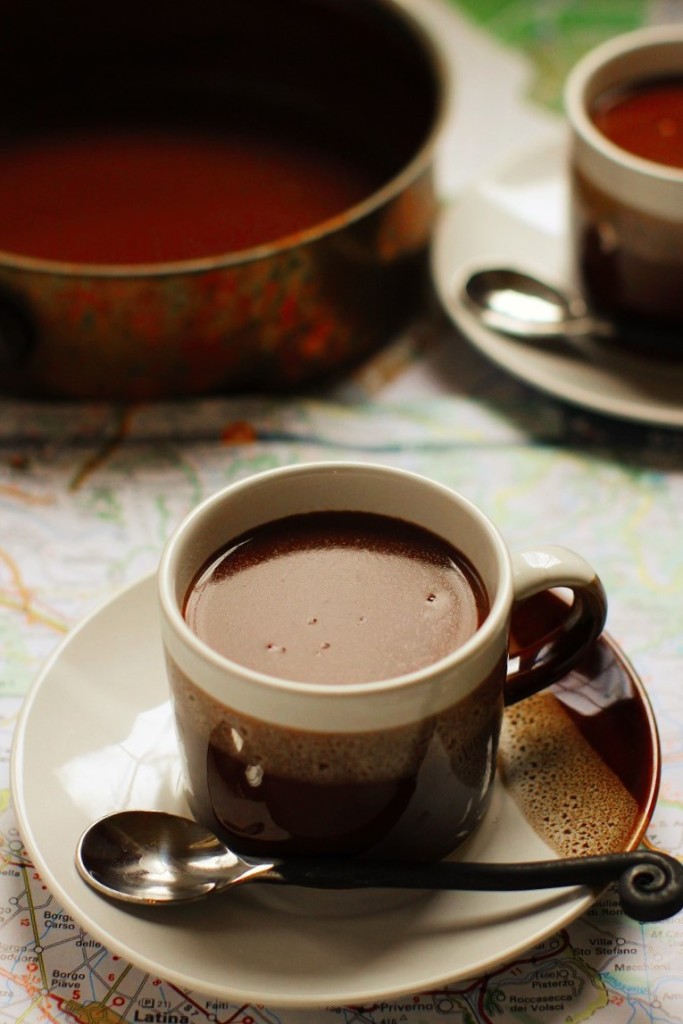 In a small saucepan, whisk together the cocoa powder, sugar, cornstarch, and salt. Stir in ¼ cup (4 tablespoons) of the milk, one tablespoon at a time, to make a smooth paste. Add the rest of the milk, the vanilla, and the chocolate (broken into smaller pieces).

Cook over medium heat, stirring constantly, until the mixture comes just to a boil.

Pour into small cups and serve immediately. Provide sugar if guests would like to add some to taste, though I find it just sweet enough as is.

Close your eyes and pretend you are in a small café in Italy.

« Wild Mushroom Risotto (and we're off to Italy!)
Chicken Breasts in Orange Sauce and a Cooking Class in Rome »